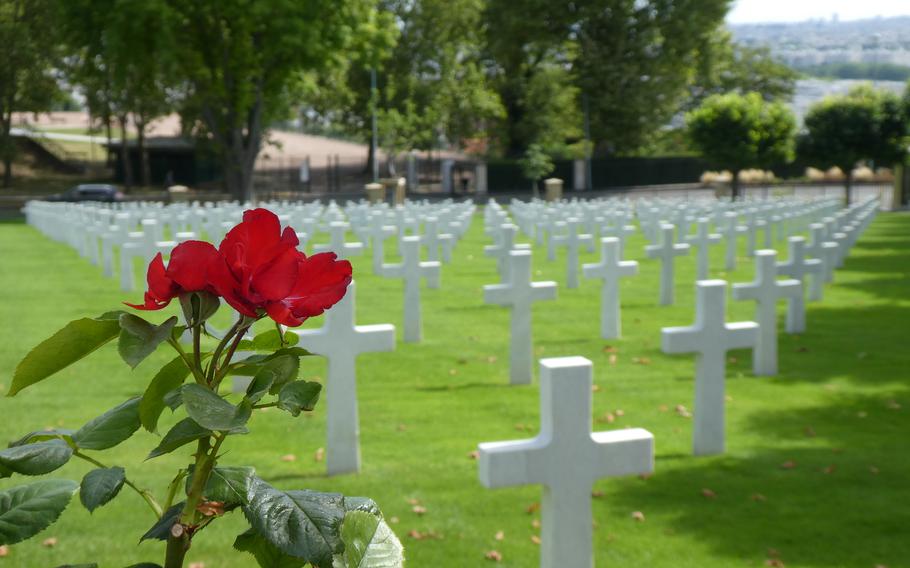 A World War I Memorial Day ceremony will be pre-recorded at American Cemetery in Suresnes, France, and available to watch online on the holiday. ()

For many U.S. military members stationed in Europe, attending a Memorial Day commemoration ceremony on the burial grounds of our fallen soldiers from World Wars I and II represents a poignant and meaningful way to pay tribute to those who came before.

There to help us to honor them is the American Battle Monuments Commission, an agency of the executive branch of the federal government established by an act of Congress in 1923. The commission was formed to honor the service and sacrifice of U.S. Armed Forces by creating and maintaining memorial sites, holding commemorative services, and transmitting the legacy of those who gave all to future generations.

While the ceremonies themselves are off-limits, some of the ABMC cemetery grounds and memorials will be open to the public over the weekend, subject to host nation COVID-19 regulations. In these places, the gates will close at a designated time to allow staff and host nation guests to render the proper honors while respecting social distancing and public gathering restrictions. Once the ceremonies have concluded, the gates will reopen. Before considering any cross-border travel, do bear in mind that many COVID-19 travel restrictions remain in place, including those between neighboring countries within the European Union. Online: abmc.gov/cemeteries-memorials

The ABMC’s sphere of responsibility within Europe was expanded on Dec. 12, 2020, the date the Battle of the Bulge Monument in Belgium officially became its 31st federal monument. Previously known as the Mardasson Memorial, the monument stands as an expression of gratitude from the Belgian people to the American soldiers who perished in the U.S.’s largest and bloodiest WWII engagement. The monument was transferred on the basis of a 99-year lease between the Kingdom of Belgium and ABMC, with a nominal lease payment of 1 euro to be paid annually. Plans over the next several years call for the restoration of the memorial, along with enhancement of its landscaping, improvements in its accessibility and the construction of a visitor center. Online: tinyurl.com/2pex5cyz

The ABMC isn’t the only organization to task itself with looking after American graves and memorials located outside the continental U.S. American War Memorials Overseas is a private organization that works to document, promote, and care for gravesites and memorials falling outside of U.S. government auspices. With donations from individuals and corporations and grants from private foundations, the nonprofit cooperates with other organizations at the local, national and international level to safeguard the future of hundreds of smaller memorials within their historical contexts.

A key objective of American War Memorials Overseas is to record the existence and location of these places and to make this information readily available. To this end, they maintain and continuously update a database currently listing 2307 memorials at 1709 sites. The database is searchable by a host of different parameters, including the name of the person honored, type of memorial and the country in which it is located. A search of war memorials in Bavaria, Germany, for example, reveals the existence of a monument to American veterans in the Alter Friedhof cemetery in Schweinfurt; a plaque honoring the 3rd US Infantry Division in Berchtesgaden, and a monument on the banks of the Danube commemorating three American soldiers who drowned in a training accident south of Kelheim. To learn more or support their mission, see uswarmemorials.org

Foreign and Outlying Departments and Posts of the American Legion, FODPAL for short, refers to the some 250 posts of The American Legion located outside the borders of the continental U.S. FODPAL trustees are charged with the custody, control and administration of the Overseas Graves Decoration Trust Fund. Established in the 1920s, the fund provides U.S. flags to be flown at cemeteries and burial sites outside the control of the American Battle Monuments Commission. It also disperses funds to honor, preserve and decorate the individual graves of U.S. veterans buried overseas. FODPAL sends its funding requests to The American Legion, which dispenses the funds annually on a first-come, first-served basis. Online: tinyurl.com/dbrncucn