Castle ruins and spectacular views over the Nahe valley in Germany 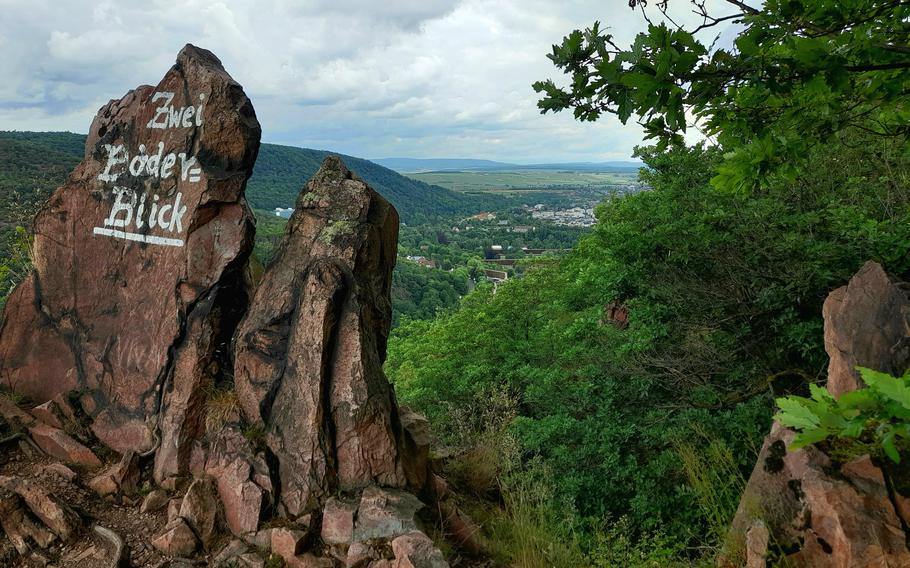 The scenic Two Pools viewpoint offers panoramas of Bad Kreuznach along with its pool and spa facilities. (Karen Bradbury/Stars and Stripes)

As much as I dream of conquering the snow-capped mountain peaks of Bavaria, I've also come to appreciate the joys of hiking the state of Rhineland-Pfalz, where vistas of castle ruins and sun-drenched vineyards alternate with landscapes blanketed by thick forest.

Of course, it’s a different look in the winter, when the evergreens stand out among their bare-branched neighbors. But if you’ve just moved to the area and you enjoy a warmer nature outing, here’s something to look forward to come spring. 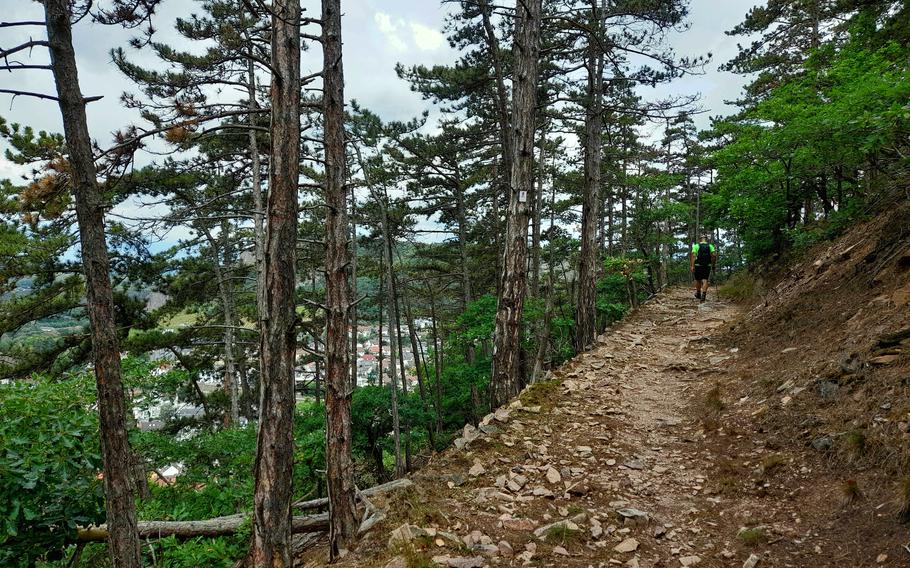 The trail follows the contours of the Nahe River as it flows between Bad Muenster am Stein and Bad Kreuznach. (Karen Bradbury/Stars and Stripes)

One of my favorite regions for hiking is in the valley formed by the Nahe River, a left-hand tributary of the Rhine. And Bad Muenster am Stein-Ebernburg, a tidy spa town located at a bend in the river, is one of my favorite points of departure.

The town’s centerpiece, a leafy “cure park” with curious, anachronistic saline walls promising relief to those with respiratory ailments and a towering cliff as its backdrop, evokes a sense of times long past and a feeling of security. 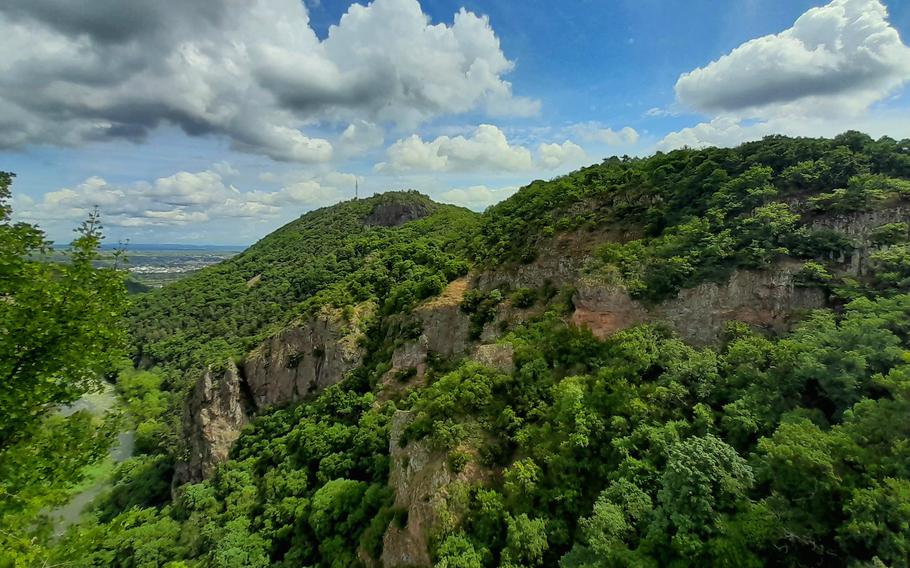 The trail offers a fine perspective of the Rotenfels, said to be the highest cliff face north of the Alps. (Karen Bradbury/Stars and Stripes)

While hikers making their first visit to the region might opt to hike up the Rotenfels, a modest mountain whose claim to fame is its sheer rock face said to be the highest north of the Alps, we opted instead for a hike marked as the Vitaltour Rheingrafenstein, a 9-mile loop deemed of medium difficulty by one source and difficult by another. 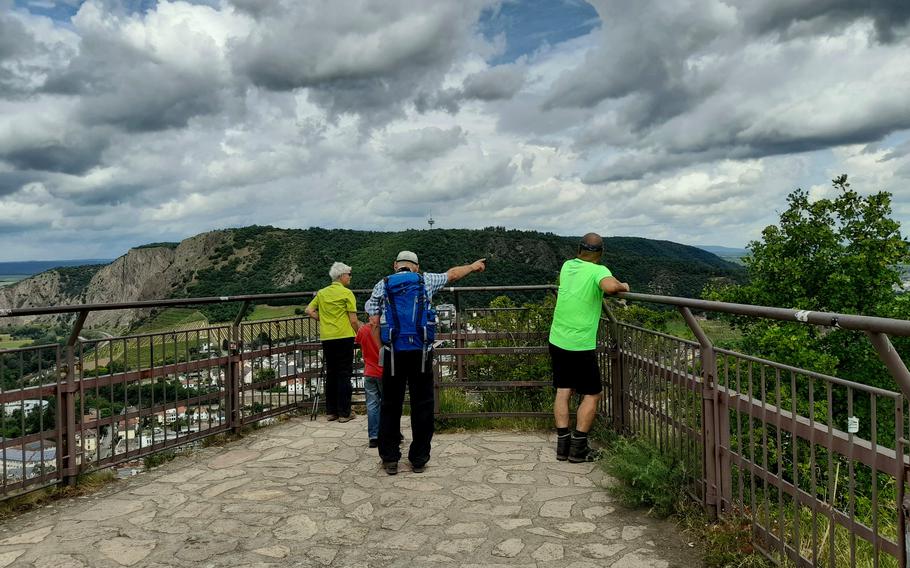 The steep climb up to the ruins of Rheingrafenstein Castle pays off in the form of a fantastic view over the Nahe valley. (Karen Bradbury/Stars and Stripes)

Fortunately for our group of three, it was only the trail's first couple of miles that proved particularly challenging. After crossing the Nahe via a footbridge and ascending into thick foliage, the path rose sharply on the way to Rheingrafenstein, the remains of an 11th-century castle destroyed by the notorious French general Ezechiel Melac in 1688.

From its viewing platform, we enjoyed an airplane-view perspective of the town and its surrounding villages, all overlooked by the wonderfully intact Ebernburg Castle, which nowadays operates as a Protestant conference and educational center. A sweeping view of Bad Muenster am Stein-Ebernburg and the Nahe River opens up by the ruins of Rheingrafenstein Castle. (Karen Bradbury/Stars and Stripes)

From this lofty height, the trail winds roughly parallel along to the next vista, a view over neighboring Bad Kreuznach and toward the Rhine.

The scenic viewpoint's name, 2-Baeder-Blick, refers to the sight of two swimming pools, either of which would make for a marvelous post-hike option, particularly on a hot summer’s day.

With a modest gain in elevation, we passed by a radio tower, trees bearing ripe cherries and meadows bursting with purple foxglove. 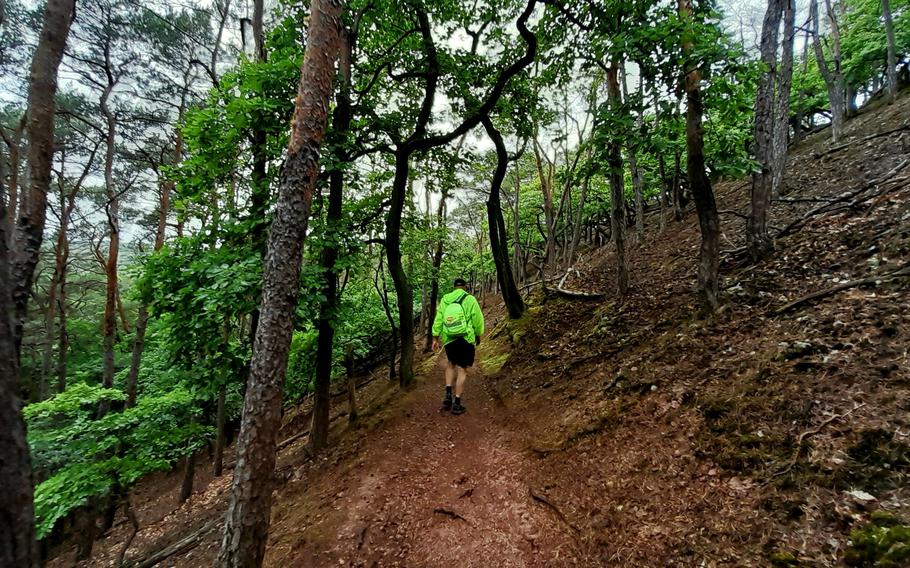 A hiker makes his way along the Serpentine Trail near Bad Muenster am Stein-Ebernburg. (Karen Bradbury/Stars and Stripes)

Atop the highest hill, we encountered a Waldorf School and a pasture in which horses grazed. In short order, our dismay that the first restaurant we passed by that day was closed was replaced with delight upon discovery of Das Neu Waldheim.

The rustic establishment formerly attached to a local walking club offered garden seating under spacious umbrellas, wines of the Nahe and plenty of choices in regards to the regionally brewed Kirner beer, available in bottles only. 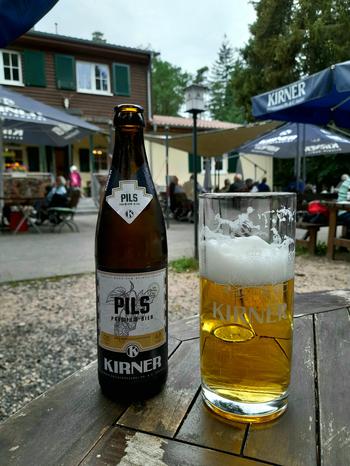 The wide selection of beers brewed in nearby Kirn can keep hikers on the Nahe River trails well-hydrated. (Karen Bradbury/Stars and Stripes)

We didn’t eat, although the day’s special, half a roasted chicken served with bread, would have tempted if we hadn’t packed a picnic. The menu also featured salad, pasta, schnitzel, desserts and options for children, all at more-than-reasonable prices.

Highlights along the next stretch of the path included a burrow-pocked sandy bank and remnants of the 100 million-year-old sea that once blanketed the region, along with some ancient human graves we regrettably passed by without noticing. 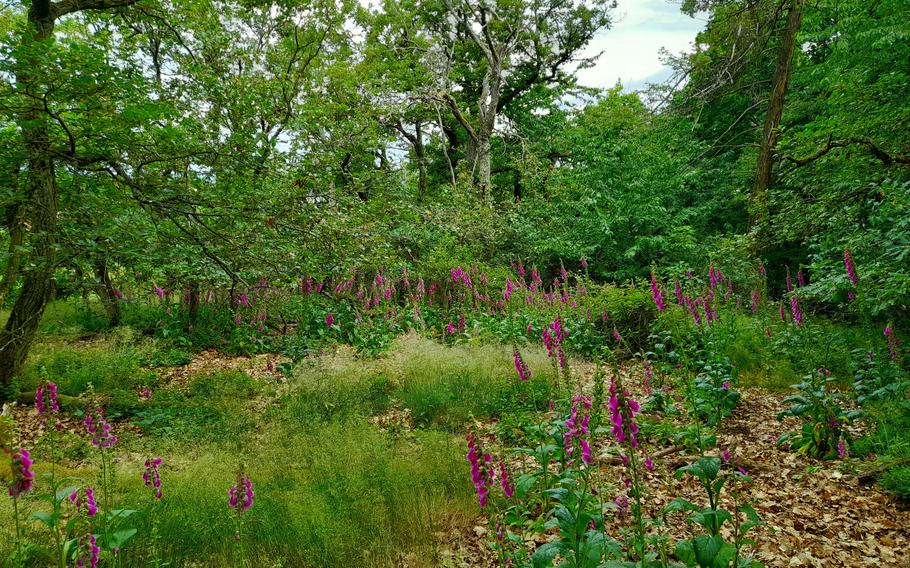 Meadows full of foxglove add a splash of color to the route. (Karen Bradbury/Stars and Stripes)

Although we’d been looking forward to beers with a view, the restaurant housed in the Altenbaumburg castle ruins was closed that day. The final miles were made up of a gentle, tree-lined serpentine trail that gradually brought us back down to earth.

The hike, signposted as a five-hour endeavor, had taken us roughly that. In terms of all that makes a good hike great — history, nature, unexpected discoveries and ample, reasonably priced food and drink — the Vitaltour Rheingrafenstein provided in plenty. 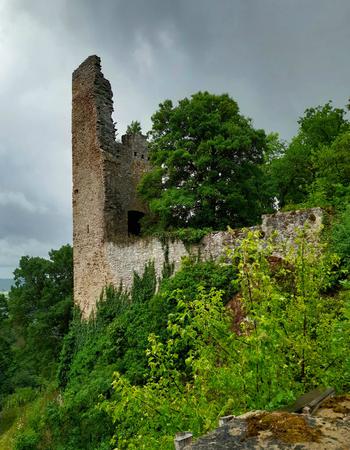 The ruins of the Altenbaumburg Castle house a restaurant that is open from March through October. (Karen Bradbury/Stars and Stripes)

Address: The walk can be started from anywhere in Bad Muenster am Stein-Ebernburg. To find the trail, walk to the end of Kurstrasse, cross the pedestrian bridge over the Nahe River, pass by the Lidl to the right and turn left on Speckerbruecke. The trail begins in about 200 yards. It can be walked in either direction; we chose to walk it clockwise. An alternate starting point for those with a car is the Freizeitpark Kuhberg, located at Rheingrafenstrasse 159 in Bad Kreuznach.