An array of allure at Abbey Gardens in Bury St. Edmunds 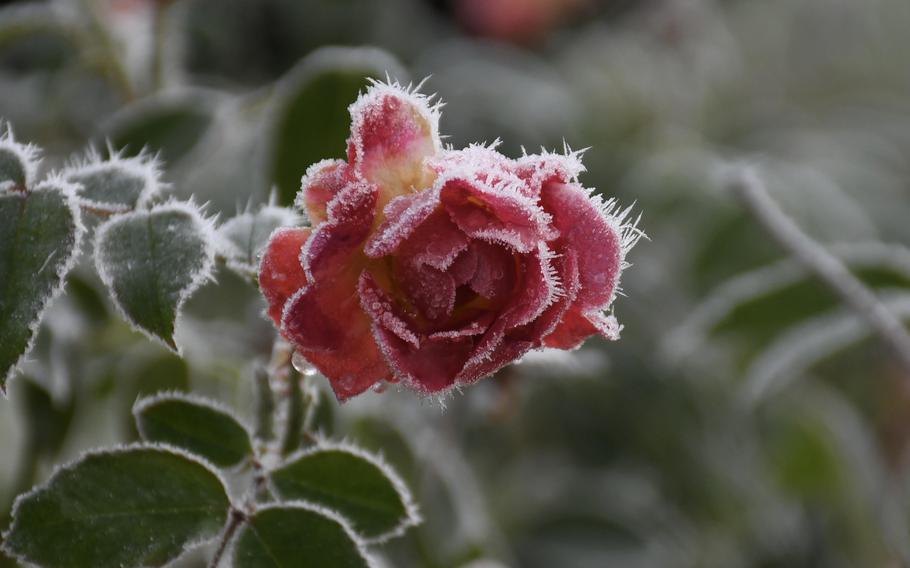 A frozen rose in the Appleby Rose Garden in the Abbey Gardens of Bury St. Edmonds, England, Dec. 13, 2022. The rose garden is named after John Appleby, an American serviceman who served with the 487th Bomb Group during World War II in Lavenham and wrote the book “Suffolk Summer.” (Kyle Alvarez/Stars and Stripes)

A 14-acre park whose wonders include the remnants of one of England’s most famous monasteries and an award-winning rose garden is less than a half-hour from the trio of nearby military installations.

But the serenity I felt at the Abbey Gardens in the heart of Bury St. Edmunds made me feel as if I was far removed from it all.

I had an unexpected tour guide, whose appreciation for the place left an unforgettable mark. I met Malcolm Mayhew that morning at the park coffee shop.

A 68-year-old retiree who survived lung cancer a few years ago, Mayhew makes it a point to enjoy the park every day as a token of his new appreciation for life.

“This place is just marvelous, simply marvelous,” he said as we walked around the park drinking our coffee. “I come here more for the exercise. It’s something to enjoy and it lets me get my 10,000 steps a day, although I’m a bit slow since I only have one lung.” 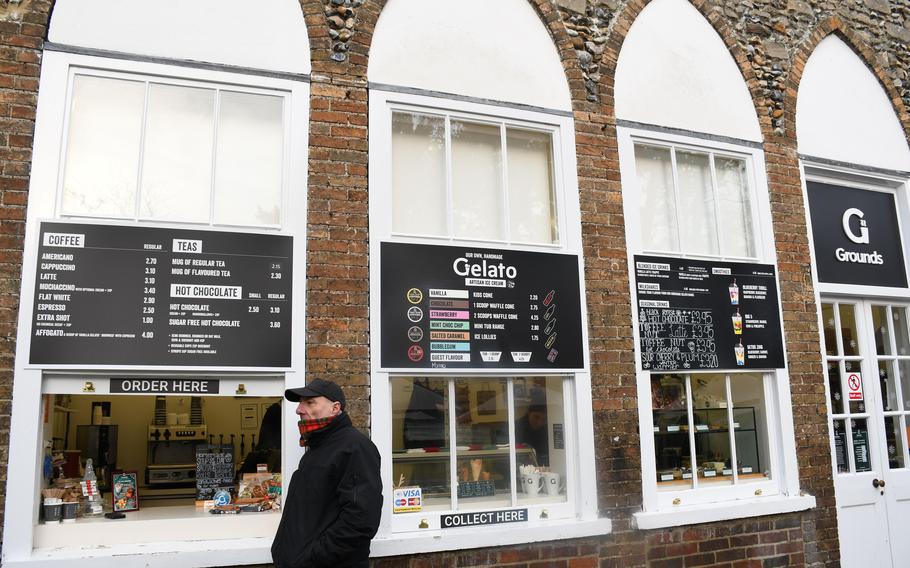 Malcolm Mayhew waits for his coffee at the Abbey Gardens coffee shop, Dec. 13, 2022. Mayhew, 68, is retired and a lung cancer survivor who comes to the Abbey Gardens every day as part of his daily routine. (Kyle Alvarez/Stars and Stripes)

The ruins of an 11th-century Benedictine monastery, which was once a major pilgrimage site, are preserved at the park.

The importance of the location was due to who was buried there. King Edmund the Martyr ruled East Anglia in the ninth century and was killed by Danish invaders in 869. A walkway leading up to the remnants of the Abbey Church at Bury St. Edmunds, England, Dec. 13, 2022. The ruins were once the resting place of the East Anglian King Edmund, who was considered a martyr after being killed by Danish invaders on Nov. 20, 869, after refusing to denounce his Christianity. (Kyle Alvarez/Stars and Stripes) 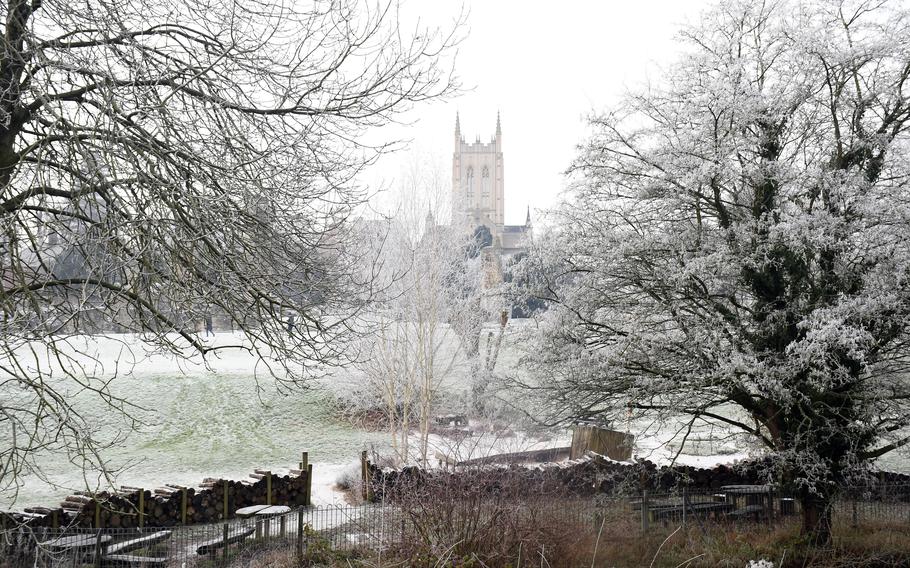 The Saint Edmundsbury Cathedral as seen from across the River Lark. Originally built in the 11th century, the church has been rebuilt multiple times and officially became a cathedral in 1914. (Kyle Alvarez/Stars and Stripes)

On my visit, the ruins were covered in ice, snow and fog, giving the park a mystical feel. I had a sense of experiencing a documentary in a real time.

During our 45-minute walk, Mayhew explained various areas of the park. One intriguing spot he described is the bowling area, a large, square patch of grass where people used to play an older version of modern-day bowling. 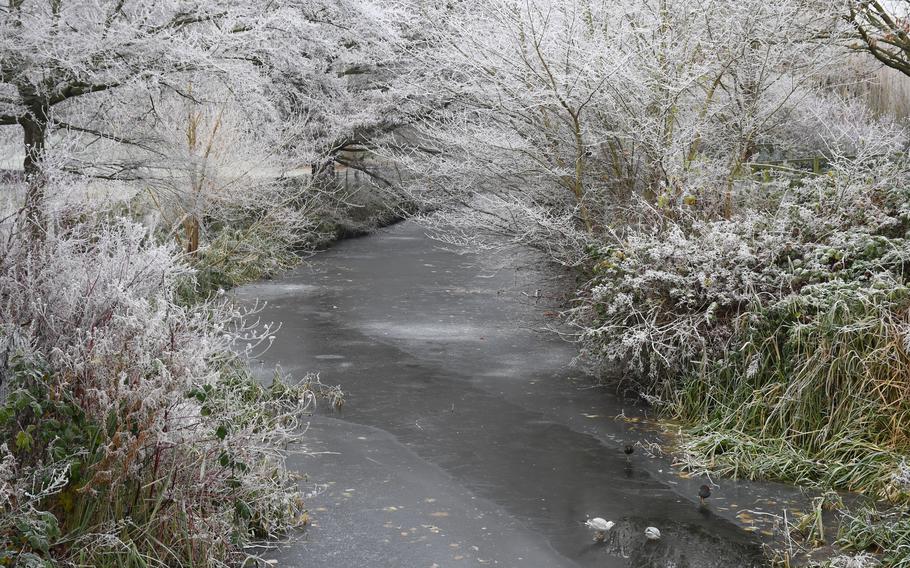 The River Lark, frozen along the side of Abbey Gardens in Bury St. Edmunds, England, Dec. 13, 2022. (Kyle Alvarez/Stars and Stripes) 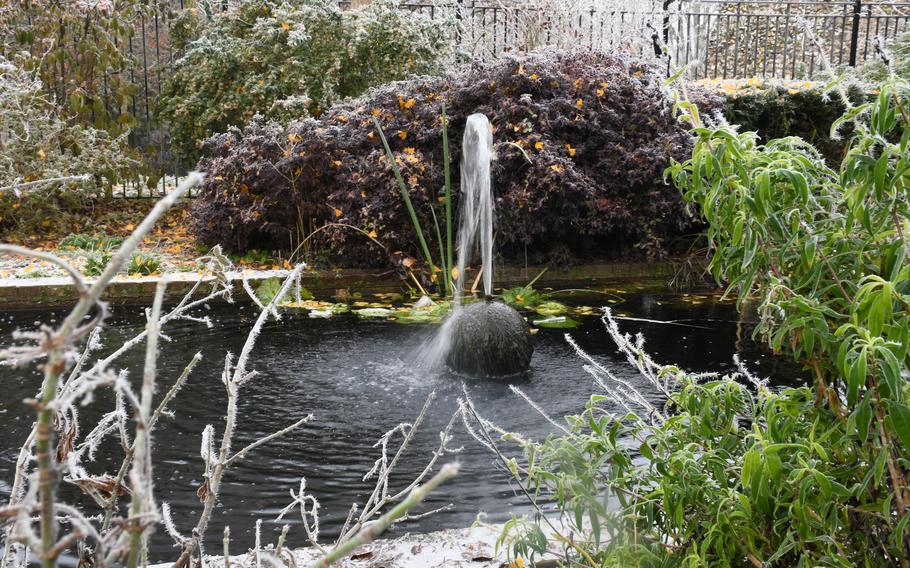 A water fountain in the middle of a manmade pond at the Abbey Gardens in Bury St. Edmunds, England, Dec. 13, 2022. The Abbey Gardens has over 400 rose bushes and locations where visitors can sit and view the sites around them. (Kyle Alvarez/Stars and Stripes) 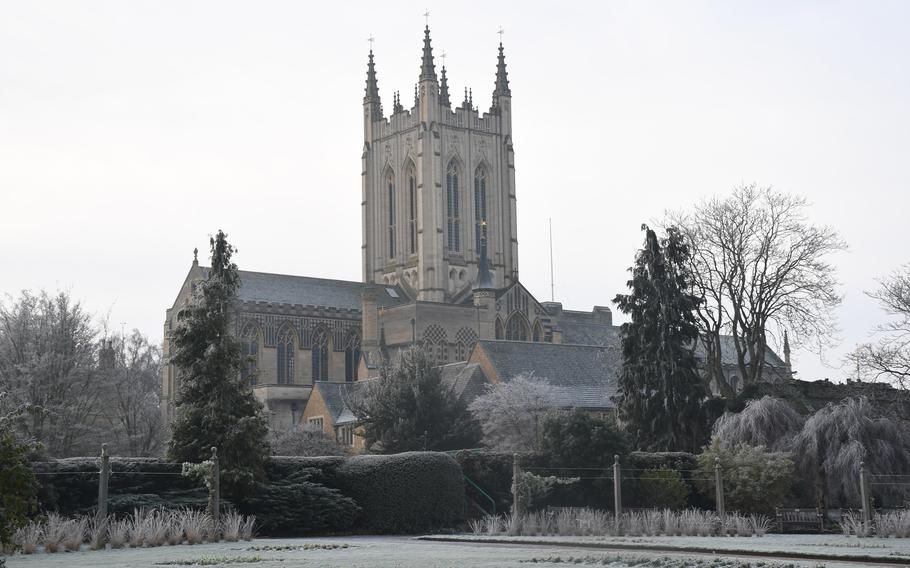 The Saint Edmundsbury Cathedral as seen from the main pathway of the Abbey Gardens, December 13, 2022. The 14-acre park has won numerous awards, including the Green Flag award for a rose garden that is on full display in the spring and summer. (Kyle Alvarez/Stars and Stripes) 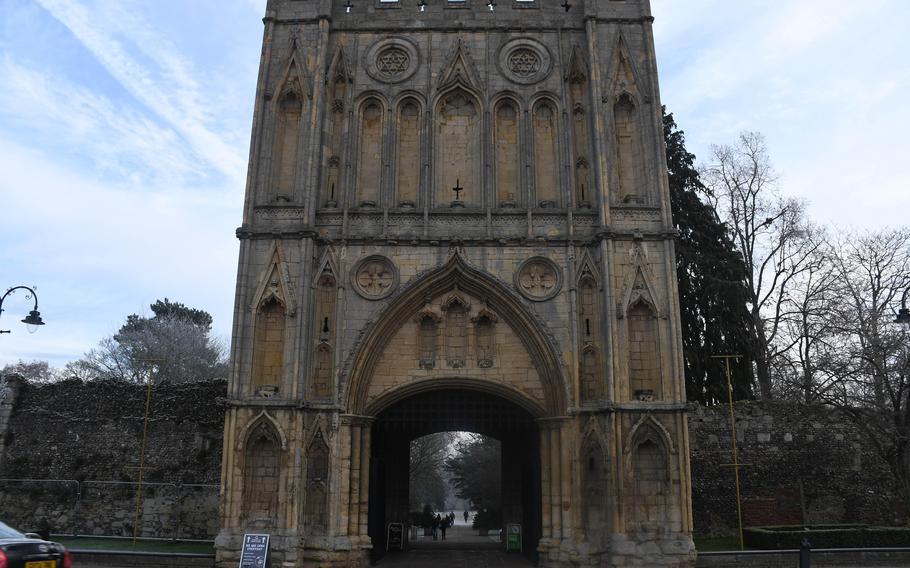 The main gate, known as the Abbey Gate, Dec. 13, 2022, in Bury St. Edmunds, England. The gate was built in the 14th century and is still the main gate to the Abbey Gardens. (Kyle Alvarez/Stars and Stripes)

Before the visit, I had heard from some friends about the Appleby Rose Gardens and their gorgeous rosebushes.

But I wondered what such a place would be like on the cusp of wintertime. It turned out to be one of the most peaceful outings of my time in England so far.

The frozen roses, combined with the architectural wonder that is St. Edmundsbury Cathedral, which overlooks the entire park, is an image that will stick with me for a long time. 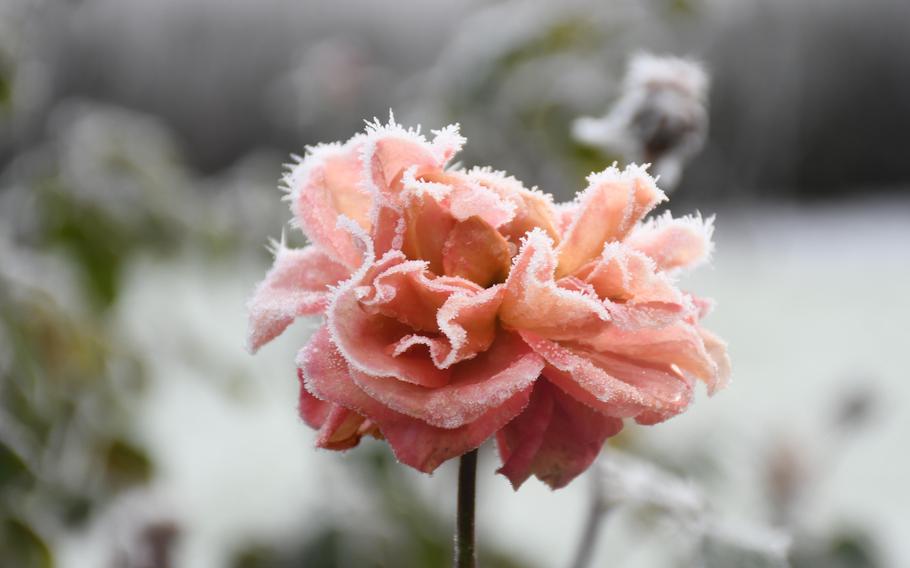 A frozen rose from the Appleby Rose Garden Dec. 13, 2022. The rose garden is named after John Appleby, who served in the U.S. Army Air Force during World War II, and donated royalties from his book Suffolk Summer, which helped bring the rose garden to life. (Kyle Alvarez/Stars and Stripes)

As I walked into the rose garden, I saw a plaque detailing how it came to be. It’s named after American service member John T. Appleby, a member of the 487th Bomb Group stationed in Lavenham during World War II who later wrote the book “Suffolk Summer,” according to the West Suffolk Council, the organization in charge of maintaining the park.

The rose garden walk took on a more somber tone as I came across a stone plaque honoring Holocaust victims. It also commemorates the Palm Sunday massacre of 57 Jewish residents on March 19, 1190.

As I walked out of the Abbey Gardens, I took stock of the time I’d spent there. Besides feeling the thrill of it, I expanded my knowledge of local history.

Now I muse about what impression the springtime version of this wonderful park will make when I bring my family in a few months.