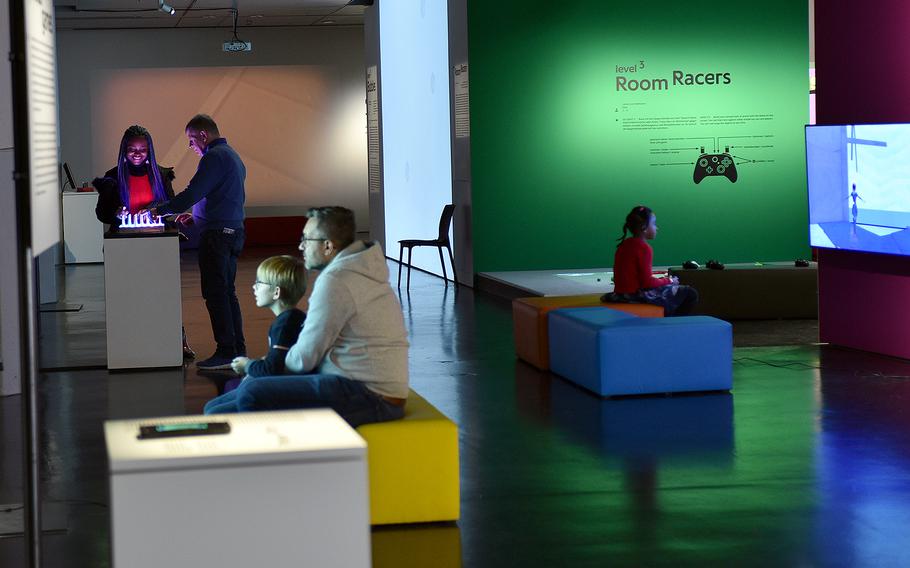 Visitors play games in the “zkm_gameplay. the next level” exhibit at the Zentrum fuer Kunst und Medien Karlsruhe on Nov. 26, 2022, in Karlsruhe, Germany. Featured here are No Man’s Sky, bottom left, a PlayStation 4 game released in 2016; Wobble Garden, top left, a 2017 game that consists of springs with LED lights; and Bound, right, a 2017 PlayStation 4 game that puts players in the mind of a pregnant woman where the main character is a dancing princess. (Matt Wagner/Stars and Stripes)

I am not the world’s most avid gamer. Sure, I go through stretches where FIFA or the occasional RPG take over my free time, but I have too many other pursuits for gaming to be all I do.

So when I moved to Germany, I shipped my PlayStation 5 with my household goods instead of bringing it in my luggage, prioritizing other items (such as clothes).

I didn’t realize how much I missed it until I went to the Zentrum fuer Kunst und Medien (Center for Art and Media) Karlsruhe, which is about halfway between the U.S. bases in Stuttgart and Kaiserslautern. 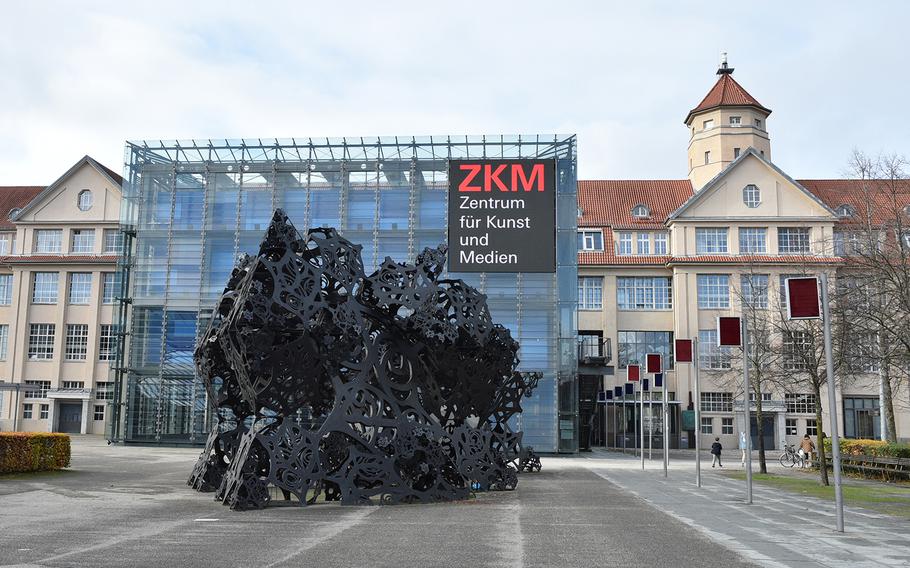 The Zentrum fuer Kunst und Medien Karlsruhe was founded in 1989 with the mission of continuing the classical arts in the digital age, according to its website, zkm.de. (Matt Wagner/Stars and Stripes)

Why, you ask? Well, one of its major attractions is the “zkm_gameplay. the next level” exhibit, described as ZKM’s video game platform. And it’s very hands-on.

Numerous games are on display and available to play, including early arcade favorites like Asteroids, Donkey Kong and Pac-Man ⁠— at some point, I held the high scores for the day on all three ⁠— and games released on consoles such as the PlayStation 4 or the newer XBox iterations.

I experienced some nostalgia playing Super Mario World on Nintendo’s SNES, reminding me of when I was a child watching my older brother control Mario to save Princess Toadstool from the evil Bowser with the help of the dinosaur Yoshi.

The exhibit is split across four levels: retro, new narratives, creative and aesthetic games and political games. The ZKM offers a healthy variety of all games and information, with the retro section showing all major consoles from the Magnavox Odyssey, the first home gaming system, released in 1972 through the PlayStation 2 and XBox. 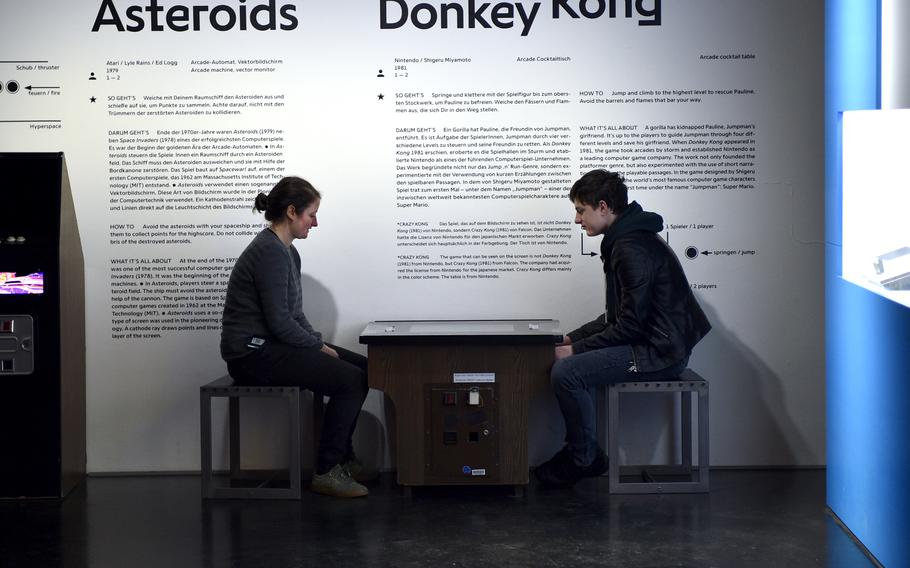 Visitors play the Crazy Kong game from Falcon, which had acquired the license for the original Donkey Kong arcade game from Nintendo in 1981, at the “zkm_gameplay. the next level” exhibition in the Zentrum fuer Kunst und Medien Karlsruhe on Nov. 26, 2022, in Karlsruhe, Germany. The arcade table is from Nintendo. (Matt Wagner/Stars and Stripes)

Don’t expect to see popular games like Call of Duty or Halo in the rest of the exhibit, though. Many are more innovative, like SisyFox, a game where you roll a medicine ball to control the fox character, which is rolling a boulder up a hill.

In the political section, The Democracy Machine is set up in a game-show style, where two contestants or groups, if they don’t agree on a question, can argue among themselves for two minutes to see if they can come to a consensus or compromise.

One of the patrons’ favorites on a recent Saturday afternoon was Bubbles, a game created in 2000 that uses a projector and the players’ own bodies to bounce bubbles on the screen. Kids and adults alike reveled in the simplistic fun the game offers.

Now, lest you think that all I did was play video games for hours, which is partially true, the museum does offer more traditional art exhibits. 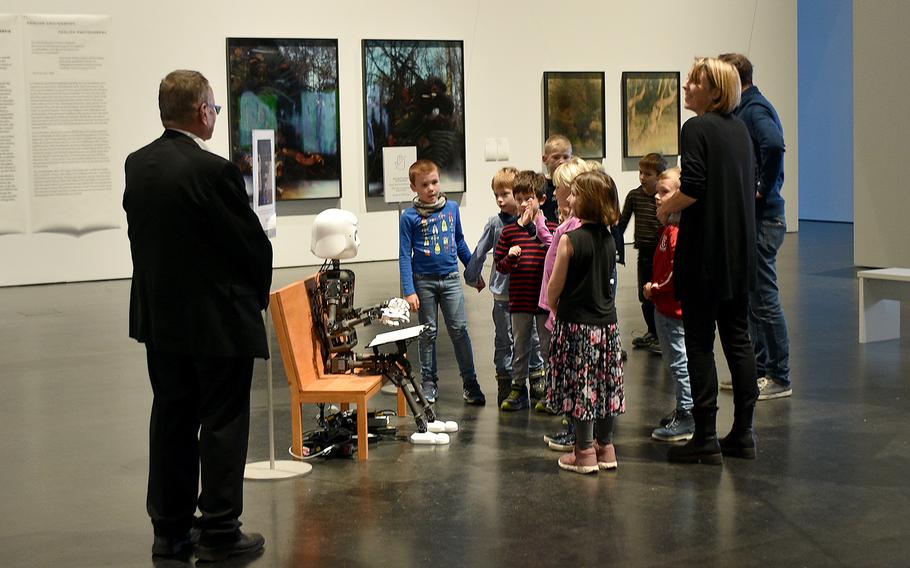 A group gathers around Robot Yeong-Hee, a robot installation that is part of the “Kim Soun-Gui: Lazy Clouds” exhibit, on Nov. 26, 2022, at the Zentrum fuer Kunst und Medien Karlsruhe in Karlsruhe, Germany. Missing from the installation is a tree, which was “getting fresh air.” (Matt Wagner/Stars and Stripes)

While numerous exhibitions seem to be under construction, one of the big draws is “Kim Soun-Gui: Lazy Clouds,” a traveling display of the Korean-French artist’s work.

Kim has used various media throughout her career, and the exhibit shows the combined influence of Eastern and Western culture.

One work called “Song(Field) of Stone” offers an interactive feature. A stone sitting on a platform reverberates with visitors’ footsteps, and the sound can be heard using a pair of headphones.

Kim’s exhibit, part of the museum’s “Female Perspectives” initiative along with Dutch artist Marijke van Warmerdam’s “Then, Now, and Then,” will be at the ZKM until Feb. 5, 2023. 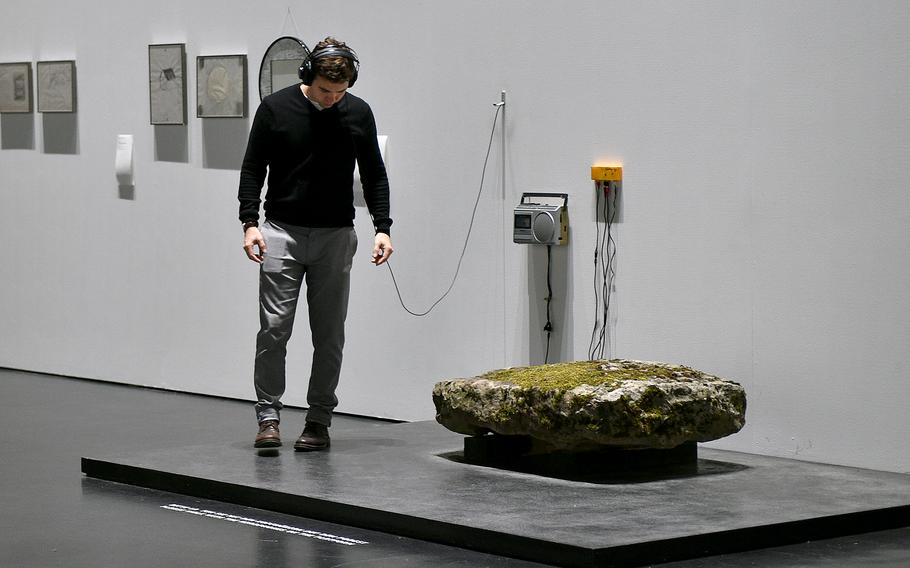 A visitor listens to his footsteps as part of work by Korean-French artist Kim Soun-Gui at the Zentrum fuer Kunst und Medien Karlsruhe on Nov. 26, 2022, in Karlsruhe, Germany. The “Kim Soun-Gui: Lazy Clouds” exhibit will be on display until Feb. 5, 2023. (Matt Wagner/Stars and Stripes)

The objects have eccentric designs and produce interesting sounds, or a lack thereof. Some create sounds at ranges the human ear can’t hear, but the speakers still bounce as if the bass has been blasted.

While you’re not allowed to touch the machines themselves, most have buttons that set the sounds in motion. Also, many have QR codes visitors can scan to see videos of the machines in motion.

Founded in 1989, the ZKM attempts to carry on the classical arts in the digital age. While doing so, it offers fun and an educational experience for people across generations and interests.

Cost: 7 euros for adults; 5 euros reduced for students, people with disabilities, people over 65 and groups of 10 or more; free for children 17 and younger