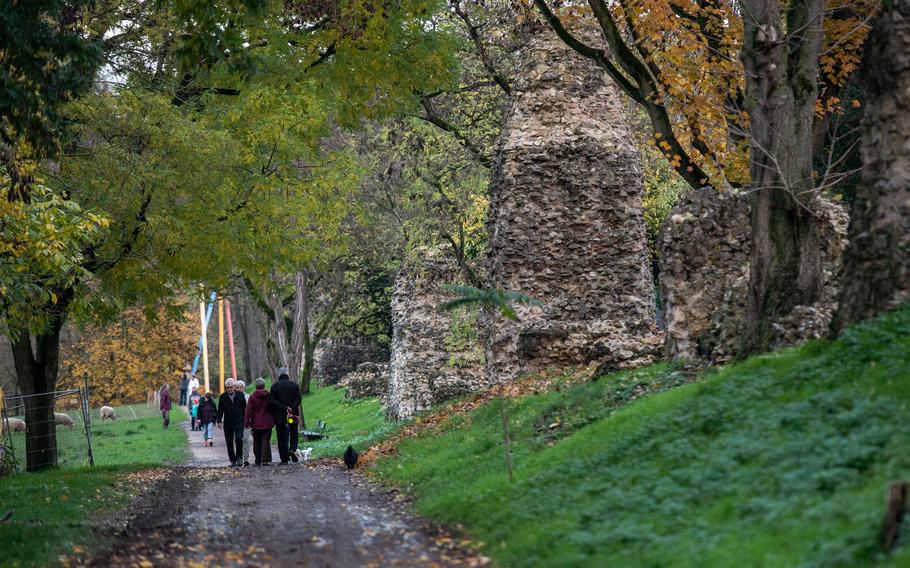 People walk past the Roman Rocks, remnants of a Roman aqueduct in Mainz, Germany, on Nov. 18, 2022. The aqueduct once delivered more than 8,000 gallons of water per day to Roman military encampments in the city. (Alexander Riedel/Stars and Stripes)

Historical sights beckon visitors throughout Europe and the German state of Rheinland-Pfalz is no exception, with its numerous castles and palaces that tell the stories of medieval ruling families and long-gone empires.

In the state capital of Mainz, some less conspicuous artifacts offer traces of the city’s ancient roots, beginning with its earliest settlement, Mogontiacum, named after the Celtic god Mogo. 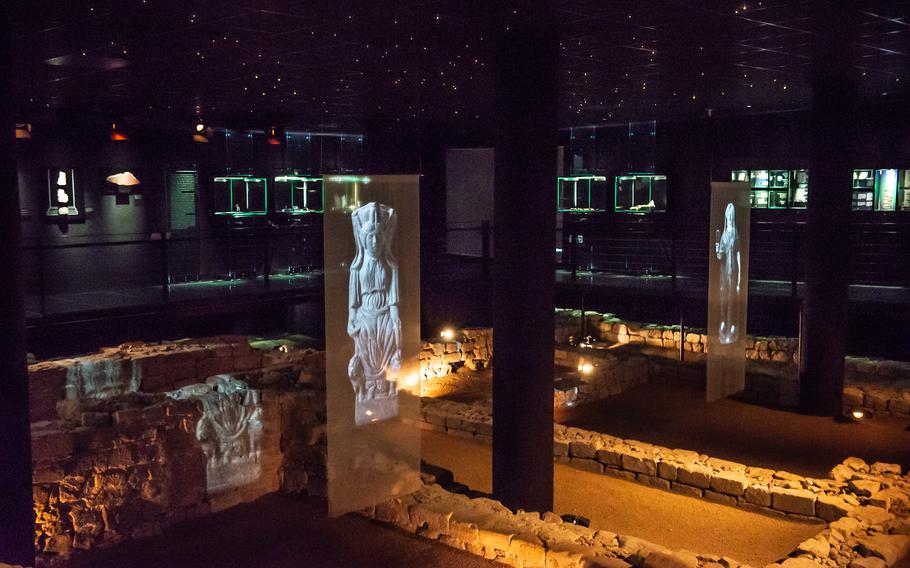 Images of statues of Isis and Mater Magna are projected over the remnants of a Roman temple in Mainz, Germany, where they once may have stood. The small museum preserves some of the walls and artifacts found during construction in the early 2000s. (Alexander Riedel/Stars and Stripes)

The Mainz area didn’t become prominent until Roman legionnaires settled there in the first century B.C., thanks to its strategic location along the banks of the Rhine and Main rivers.

The Roman military camp in Mainz is said to have thrived under the Roman politician and military general Drusus the Elder, who led the first major invasion campaign into northern Germania. 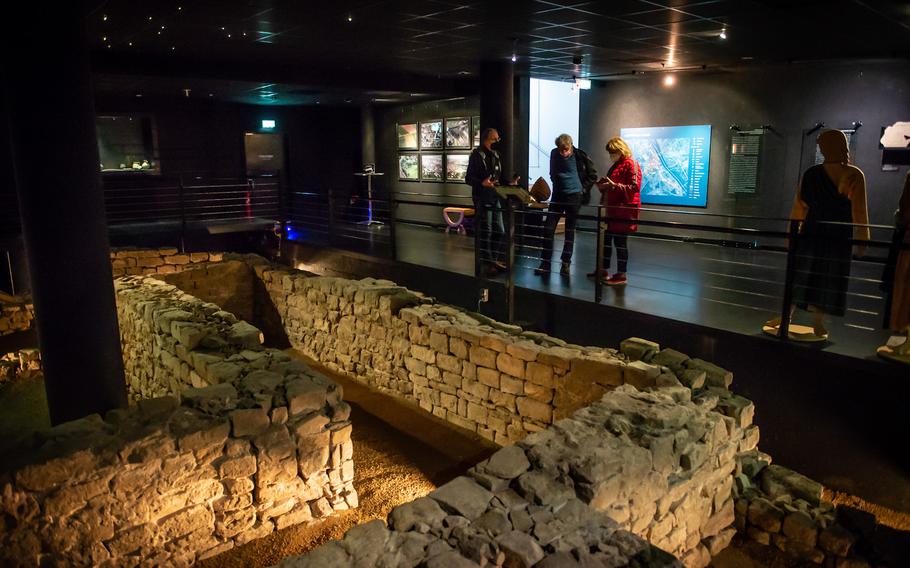 Visitors look at the remnants of the Isis and Mater Magna shrine in Mainz, Germany, on Nov. 10, 2022. The temple was discovered in the early 2000s during construction of a shopping mall. (Alexander Riedel/Stars and Stripes)

When he died, his soldiers built a tower in his memory. Today, the remains of the ancient memorial are considered the oldest building ruins in the city.

Roughly 65 feet tall, two-thirds its original height, the memorial to the general is thought to have been painted and decorated. Standing next to the entry of the legionnaires’ fort, it must have been an impressive sight in an otherwise rugged and rural landscape.

The rough surface of the monument today leaves its former appearance to the imagination. However, the column could almost pass as a natural rock formation, which explains its common name, Drusus’ Stone. 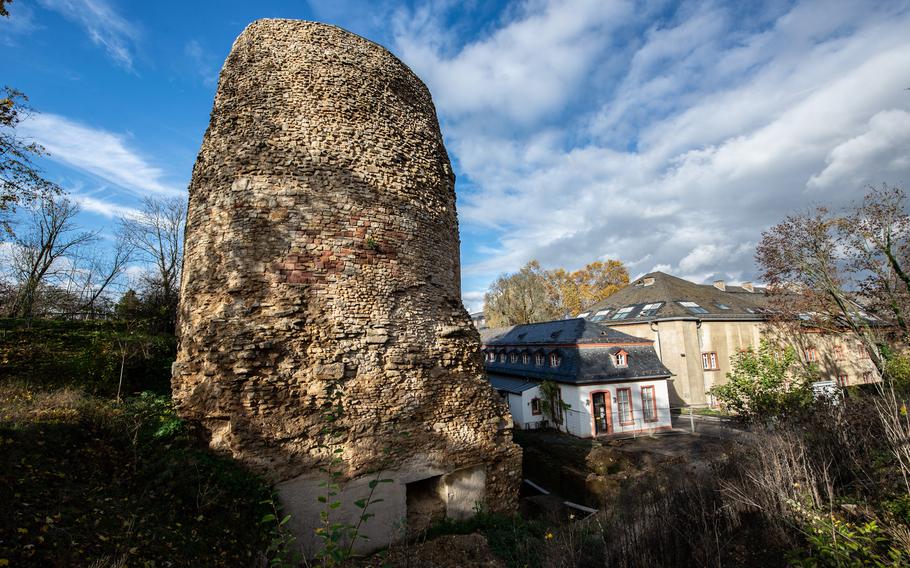 Drusus’ Stone at the citadel in Mainz, Germany. The tower commemorates Drusus the Elder, a Roman general who led expeditions into Germania. For centuries the stone was incorporated into the city’s defensive structures and used as a watchtower. (Alexander Riedel/Stars and Stripes)

The tower was constructed with opus caementicium, a kind of early concrete. Despite weathering and the ravages of time, this original core stands firm.

It was used as a watchtower throughout the Middle Ages and during later iterations of the city’s defense system as part of the historic Mainz Citadel.

Multiple Roman legions had their headquarters at Mainz, according to Initiative Roman Mainz, a local conservation society.

Later, as the frontier moved north, the town became an administrative and trading center as the capital of a Roman province. Traders and families made a home there as the empire sought to extend its holdings.

As the population increased, so did its appetite for entertainment, evidence of which was unearthed in the late 1990s as the city began expanding its railway station.

Workers found the remains of an ancient Roman theater complex that seated up to 10,000 people and is thought to have been built sometime after the year 310. 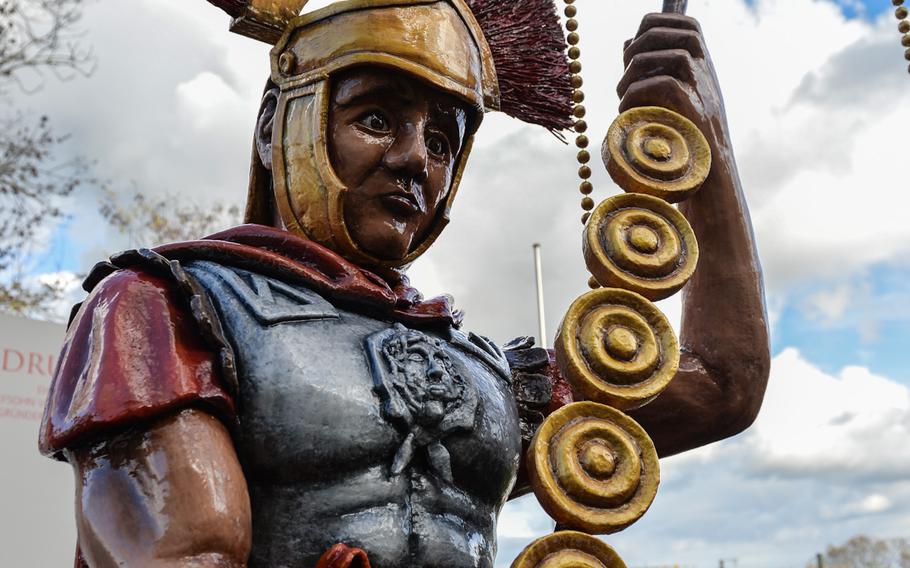 Today, regional trains rumble in and out of the adjacent station, right behind what was once the 130-foot-long stage. Colored tiles on the train platform show the extent of the original theater building. 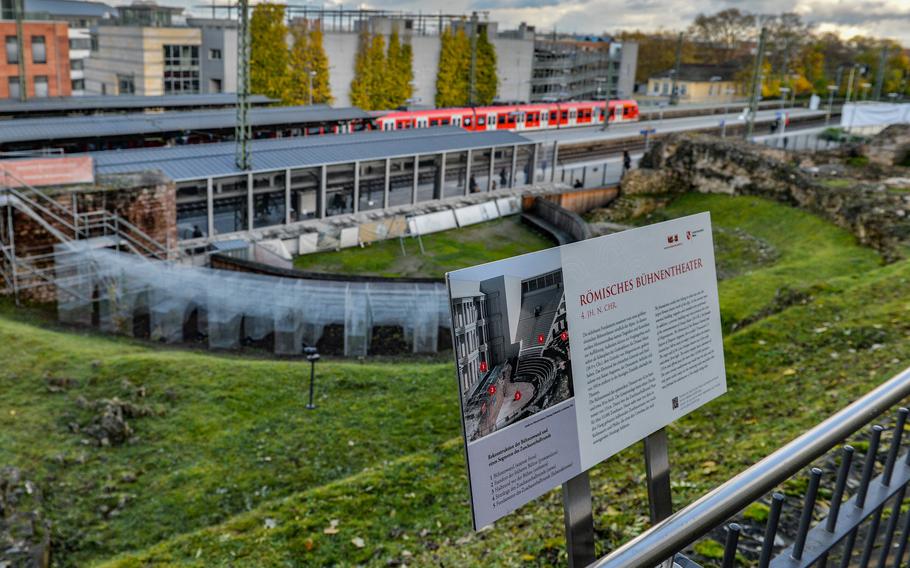 The Roman theater in Mainz, Germany, is next to a train station named after the theater. Where commuters now rush to their trains, Roman patrons once visited plays and exhibitions. (Alexander Riedel/Stars and Stripes) 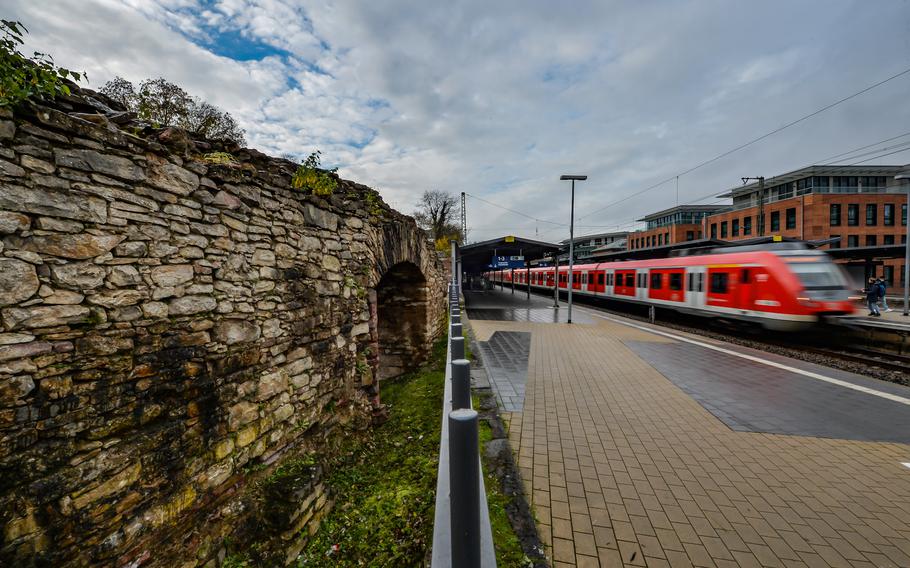 The ruins of the Roman theater in Mainz, Germany, are located at a train station named after the theater. Lighter-colored tiles show the original location of walls that were removed to make way for the rail line. (Alexander Riedel/Stars and Stripes) 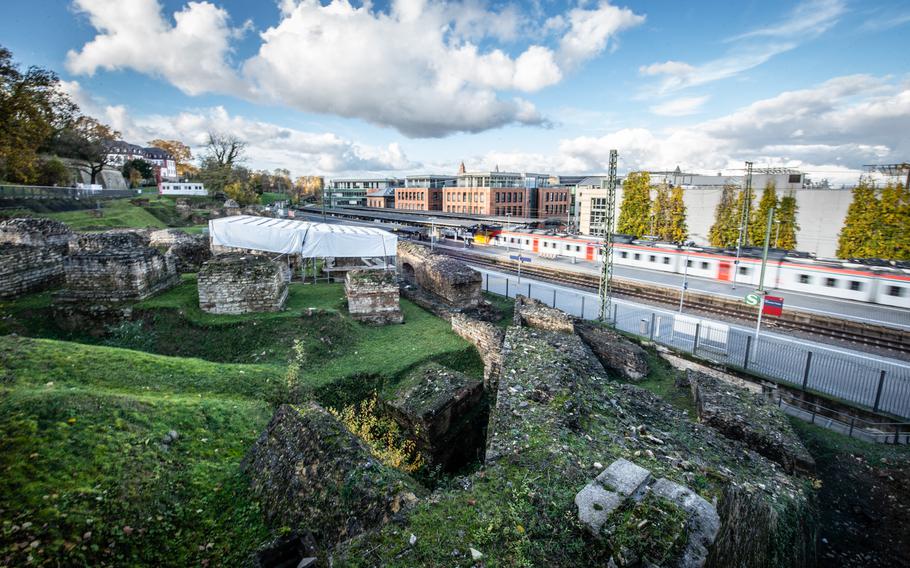 The Roman theater in Mainz, Germany, is next to a train station named after the theater. The ancient entertainment venue had a seating capacity of 10,000. (Alexander Riedel/Stars and Stripes) 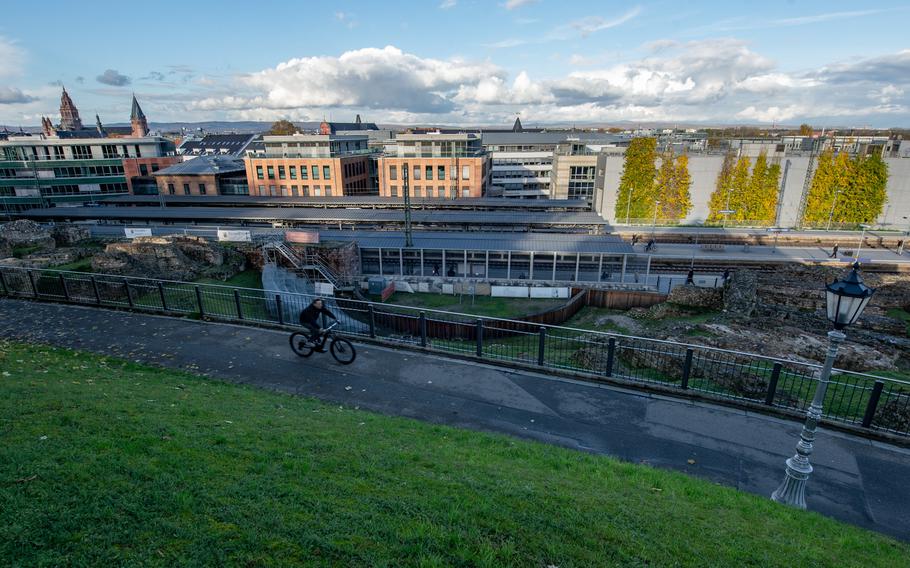 A bicyclist rides past the Roman theater in Mainz, Germany, on Nov. 18, 2022. The theater was rediscovered during construction of the rail line that now runs over the former theater grounds. (Alexander Riedel/Stars and Stripes)

Standing on a walkway at what was once the upper theater, one can imagine the raucous applause of the spectators. 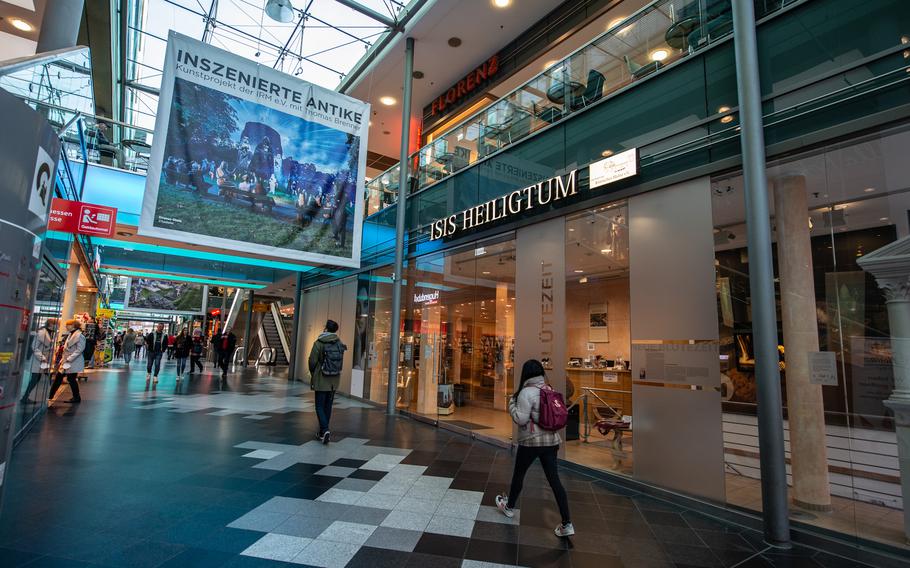 The Isis and Mater Magna shrine is in the basement of a mall in Mainz, Germany. Much of the original temple structure was lost as a result of construction of an underground parking garage, and only a small portion is preserved in a free museum underneath the shopping center. (Alexander Riedel/Stars and Stripes)

A few miles away, construction of an indoor shopping mall and adjacent underground parking garage in early 2000 brought to light an even more impressive archaeological treasure in the city center.

Just steps from Mainz’s magnificent sandstone cathedral lies the highlight of a journey to the Roman roots of this German city, the Isis and Mater Magna shrine.

Inscriptions found at the Mainz shrine show that military units built the sanctuary in the first century to honor Isis and Mater Magna, goddesses from Egypt and Anatolia, respectively.

After frantic archaeological digs, construction of the shopping mall went ahead. A small fraction of an originally much larger temple compound was made accessible to the public via an underground hall. 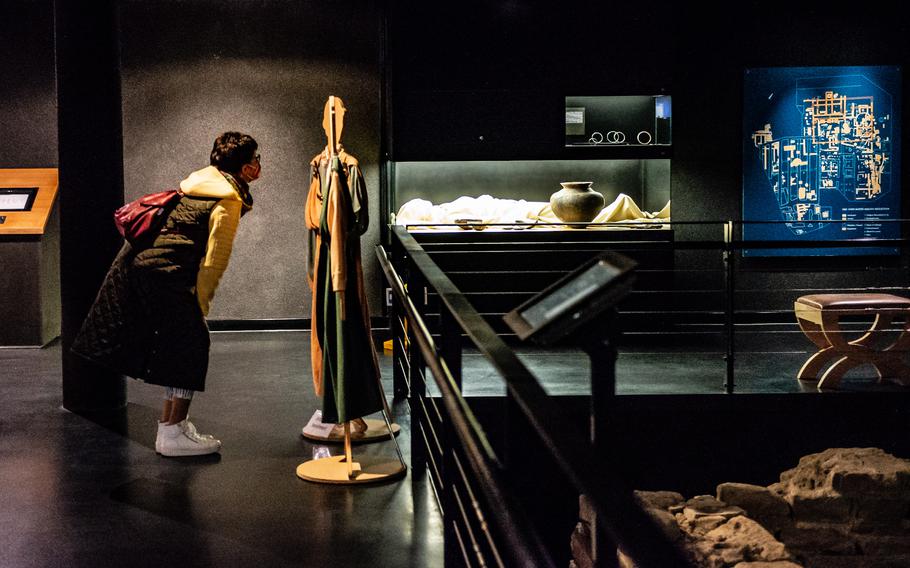 A visitor examines reproductions of Roman clothing at the Isis and Mater Magna shrine in Mainz, Germany, on Nov. 10, 2022. The temple grounds once constituted a large complex that allowed Roman soldiers, settlers and travelers to worship oriental deities such as Isis, who was believed to help the dead enter the afterlife. (Alexander Riedel/Stars and Stripes)

Visitors can view some of the artifacts from an elevated walkway. One impressive example is a small figurine of a couple locked in a loving embrace. It is believed to have been purchased and offered at the temple by newlyweds seeking the goddesses’ blessings.

Those who want to dive even deeper into how the Romans came to the Rhine should check out the Museum of Ancient Seafaring, where the remains of five wooden Roman warships are on display. 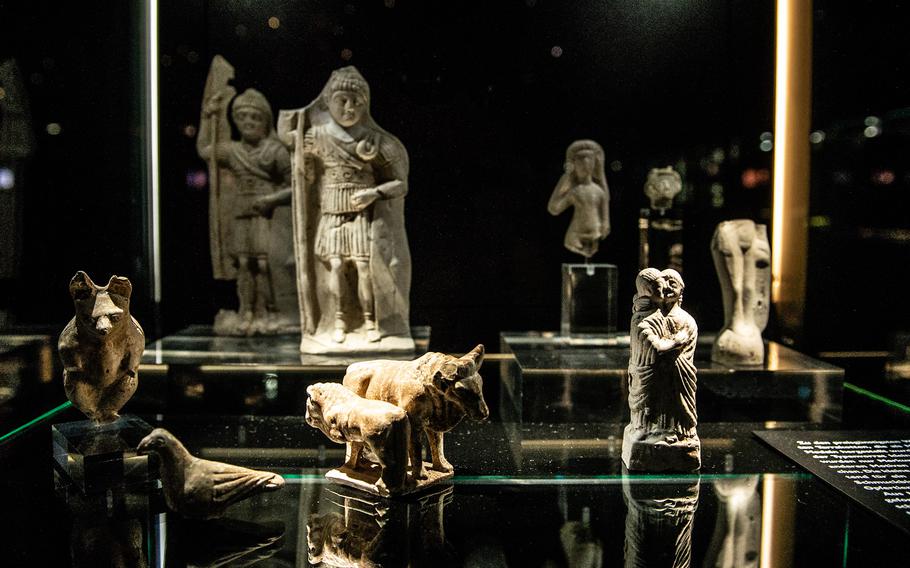 Small statues are on display at the Isis and Mater Magna shrine in Mainz, Germany, on Nov. 10, 2022. The artifacts were found during archaeological digs after the temple was discovered in the early 2000s. Experts believe they were sold and offered at the temple as tributes to Roman deities. (Alexander Riedel/Stars and Stripes)

Like the Isis temple, the boats surfaced from what must have been the river harbor of Mogontiacum in 1980s excavations during construction work at the Hilton hotel.

A final recommended stop on the trail of the empire is what the people of Mainz call the the Roman Rocks, or Roemersteine in German.

It is easy to see why. A row of 59 weathered rock piles of varying heights lines a foot path near the Johannes Gutenberg University botanical gardens.

They were once part of an architectural marvel of its time: the highest aqueduct north of the Alps. 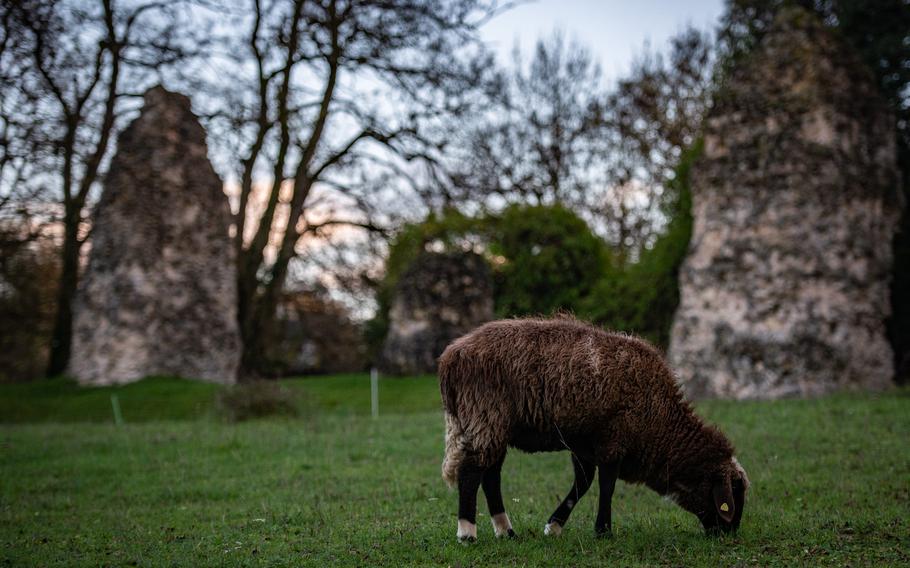 A sheep grazes next to the remnants of a Roman aqueduct in Mainz, Germany, on Nov. 18, 2022. Mainz residents call the ruins the Roman Rocks. The aqueduct once was the largest such construct north of the Alps. (Alexander Riedel/Stars and Stripes)

Constructed around A.D. 70, the aqueduct served as a show of Rome’s engineering prowess and is estimated to have transported up to 8,000 gallons of water per day to the Roman military encampments and baths throughout Mainz, according to the city.

As they may have done 2,000 years ago, families nowadays can take evening walks as sheep graze at the foot of the former aqueduct, a comforting reminder that despite the buzz of progress, some things remain the same.

Directions: All four Roman sites are in central Mainz. The Isis and Mater Magna shrine is at Roemerpassage 1. For easy access to the Roman theater and the Drusus Stone, paid and time-limited parking is available on the Mainz Citadel grounds, or take regional trains connecting to Roemisches Theater station. The Roman Rocks are best reached by car via the adjacent parking lot or the Roemersteine bus and surface rail stop.

Times: The only time-limited site is the Isis and Mater Magna shrine, which is open Monday to Saturday from 11 a.m. to 6 p.m.

Cost: Admission to all sites is free. The historic preservation society is accepting donations.

Information: The local preservation society offers comprehensive info on the sites online at roemisches-mainz.de. The website is in German but can be translated using the Safari or Chrome browsers.