Explosive history is the attraction at British fort and attached museum 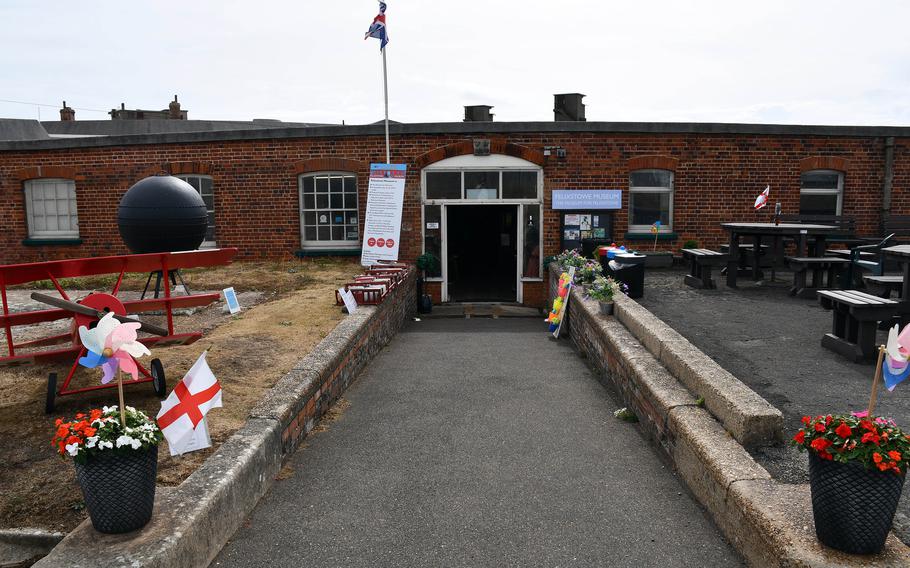 The entrance to the Felixstowe Museum, in the English port town of Felixstowe. (Kyle Alvarez/Stars and Stripes)

England is brimming with important historical sites, but not every one can garner the cachet of Stonehenge or the Tower Bridge.

One of the best things about living in Britain is the ability to find riveting history almost anywhere I go. About an hour’s drive from RAFs Mildenhall, Lakenheath and Feltwell is one of those lesser-known places whose historical chops are no less worthy. 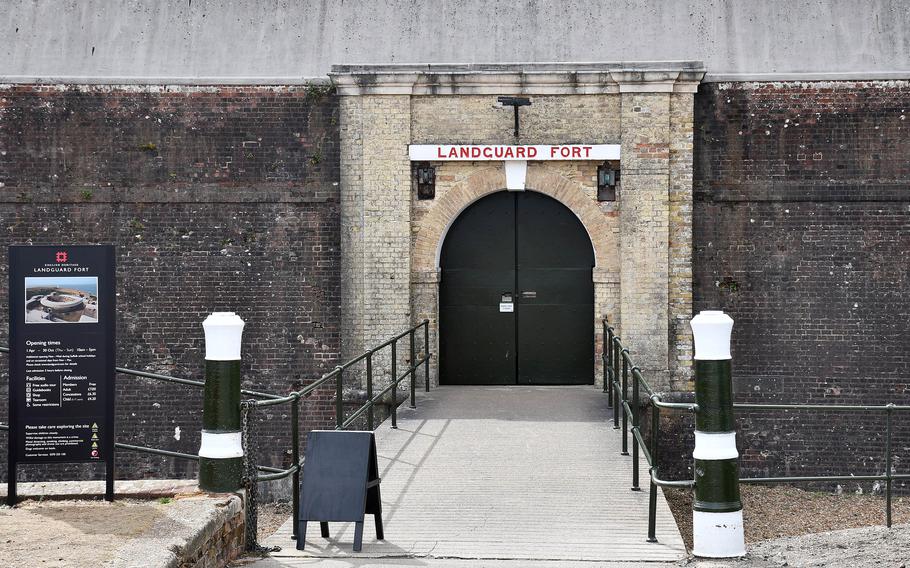 Landguard Fort in the port town of Felixstowe, England, is a historical site that is under English Heritage protection. (Kyle Alvarez/Stars and Stripes)

Landguard Fort in the port town of Felixstowe is an impressive structure that is grounded in maritime and coastal defense and played a key role in both world wars.

My family visited Felixstowe recently to get our fill of the seaside. Being from Miami, we longed for the salty marine air, and we found just what we were seeking.

The fort was initially built in the 1500s by Henry VII and was torn down and rebuilt several times over the years by the time the Dutch invaded England in 1667, which was the last time an enemy successfully invaded the country. 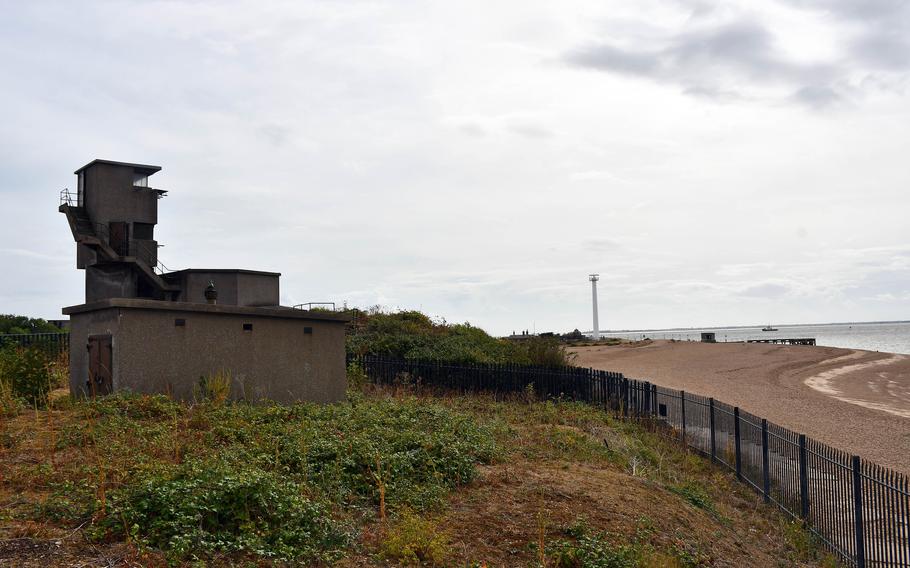 A watchtower overlooks the North Sea at Landguard Fort in Felixstowe, England. (Kyle Alvarez/Stars and Stripes)

Unfortunately, the fort was closed on the day we went, so we didn’t get to explore the inside, but were happily surprised by the adjacent Felixstowe Museum.

Both are on the Landguard Peninsula, which includes a cycling and walking trail. My daughter loved exploring the flora and fauna on the peninsula and worked on her counting skills while watching the giant ships enter the port.

After exploring the peninsula, we entered the Felixstowe Museum, which has 14 rooms with various historical themes, from miniature models of English military equipment and vehicles operated by the country’s military during the world wars, to a room dedicated to the Landguard Fort itself. My daughter especially loved all the miniature planes and boats. 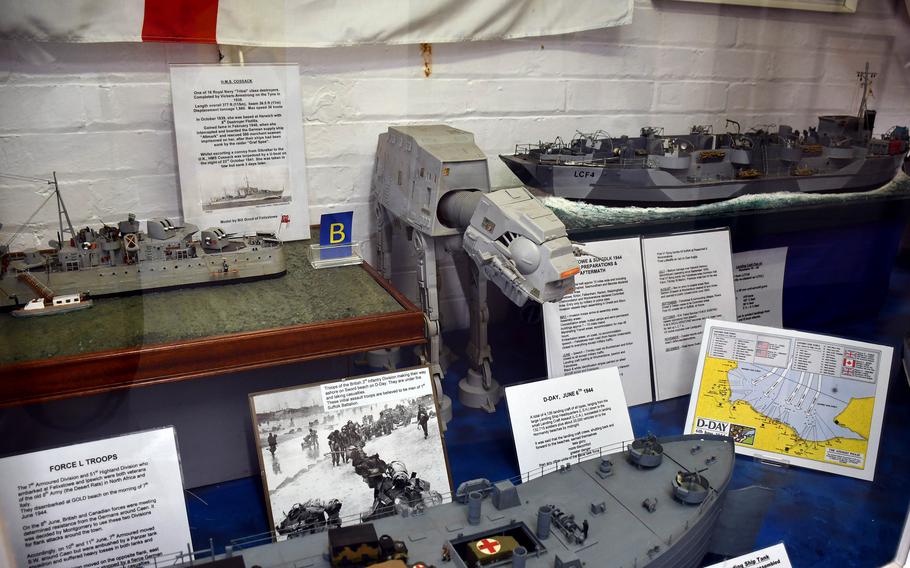 The Felixstowe Museum’s exhibits include a model room displaying vehicles used by the British military over the years. The museum staff also places fun miniature figures from fictional works, such as the “Star Wars” films’ All Terrain Armored Transport seen here. (Kyle Alvarez/Stars and Stripes)

The museum staffers have a sense of humor, as they sprinkle in fictional miniatures throughout its exhibits. I found a RoboCop toy in one room, an E.T. in another and an All Terrain Armored Transport from “Star Wars” in another.

The museum is an annex to the Landguard Fort and was used to service the underwater mines that used to occupy the Harwich Harbor, as explained by the friendly curator and manager of the museum, Andy Calver.

He explained that throughout the history of the fort, the soldiers here were tasked with protecting the ports of nearby Ipswich and a naval fort in the vicinity.

Underwater mines were transported from the fort to the beach, where they were strategically placed away from the coast at various points to ensure that no vessel could sneak into the country.

A guard would stand watch and notify others of an enemy ship, and the soldiers would set off the mines, which were attached to wires all the way back to the fort. 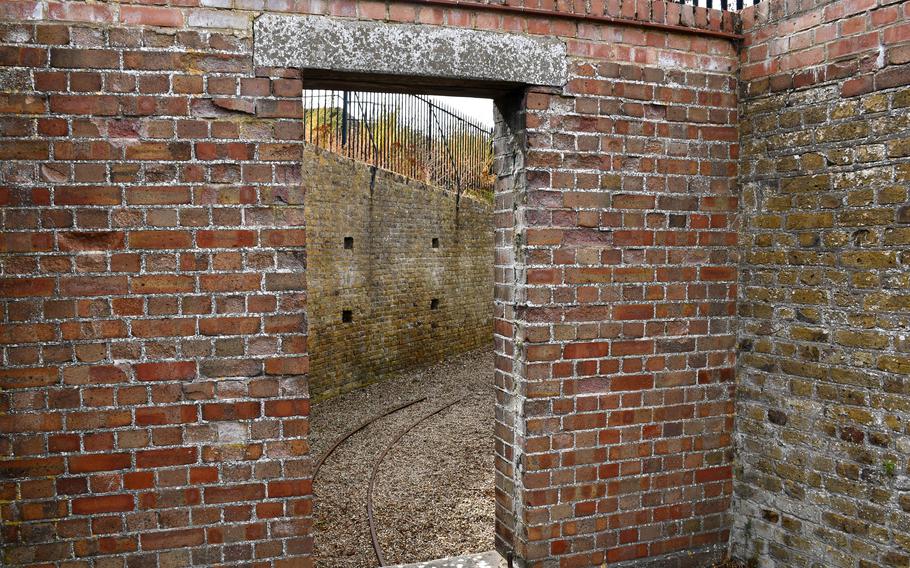 The remnants of a railway that was used to carry underwater mines from the annex building at the Landguard Fort out to the beach along the North Sea in Felixstowe, England. (Kyle Alvarez/Stars and Stripes)

Had the fort been open, we would have toured the so-called “maze rooms” and learned about the Royal Marines, their first battle and the 17th-century invasion by the Dutch.

According to the museum, Britons were concerned about the port during the world wars, and the fort was on high alert because they didn’t want a repeat of 1667. However, those concerns fortunately turned out to be unfounded.

Our stay at the museum lasted an hour. We were told that the fort excursion takes roughly two hours, so when the full experience is available, visitors should budget at least three hours to take it all in.

As for food, the on-site options are quite limited. There is a cafe at the museum, but all I saw on the menu was small snack foods, coffee, drinks and potato chips. I ate before going and I would recommend that others do the same.

Hours: Spotty. The fort will be open Dec. 17 and 18 for holiday tours, then again from Feb. 19-27. The regular schedule resumes in April until the end of October: Thursdays to Sundays and school holidays, from 10 a.m. to 5 p.m., with last admission at 3 p.m. The museum is open on a slightly different schedule from noon to 5 p.m. Check the websites or call for details.

Admission: For the museum, adults, 4 pounds; children 6 and up, 1 pound; children under 5, free; English Heritage members, 3.20 pounds; volunteers free. Ticket prices for the fort are a little higher. Prices may vary for events.