A mechanical horse lets visitors simulate the experience of a jockey. (Kyle Alvarez/Stars and Stripes)

In the days following the death of Queen Elizabeth II, her fondness for horse racing spurred an interest in me to become better acquainted with the world of equestrianism.

The nearby town of Newmarket was the ideal place to pursue this endeavor. It is considered the birthplace of the modern incarnation of the sport in the United Kingdom and therefore hosts the National Horse Racing Museum.

The size of the museum is not apparent at first glance. When I walked in, I figured that this would be the quickest of Quick Trips, but the visit lasted more than three hours. 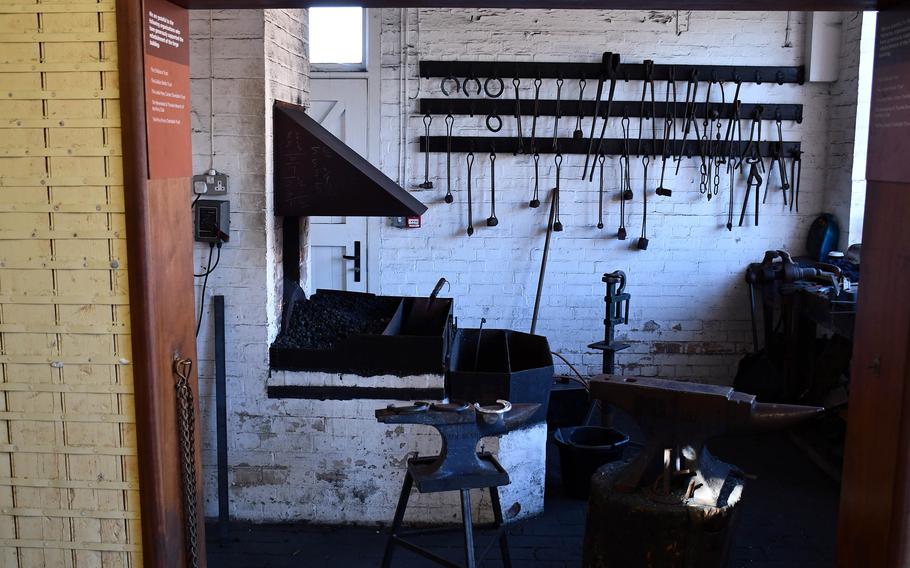 A blacksmith’s forge is on display in the Rothschild Yard at the horseracing museum in Newmarket, England. Visitors can get a behind-the-scenes look at the daily lives of retired racehorses. (Kyle Alvarez/Stars and Stripes)

The first exhibit I visited is a temporary one that runs through Dec. 4, according to the museum’s website. It consists of black-and-white photos by Jayne Odell and captures the everyday life of the racing yard.

I was not allowed to take photos of the exhibit, but it was a nice introduction for a novice like me.

On the second floor, I explored displays that trace the history of horse racing back to Persia and Greece around 1000 B.C. The National Horse Racing Museum in Newmarket, England, has displays that range from artifacts of the sport to anatomical outlines of horses. (Kyle Alvarez/Stars and Stripes)

Since I went on a Tuesday morning, I was able to take my time and devote plenty of attention to the artifacts that have been preserved there.

After seeing the exhibits, I had my choice of the Tack Room restaurant or The Bakery for some refreshment. The former was quite busy, surprisingly. It seems to be a popular location for visitors to drink tea and enjoy a morning conversation. The National Horse Racing Museum offers two food options, The Bakery and the Tack Room restaurant. The former is near the main courtyard of the museum. (Kyle Alvarez/Stars and Stripes)

I chose The Bakery, which is right outside the main exhibits in the courtyard. Although small, it reminded me of the many cafeterias in Miami, where I grew up.

After my short snack, I made my way to the back corner of the courtyard, passing a beautiful statue of the legendary champion thoroughbred Frankel. 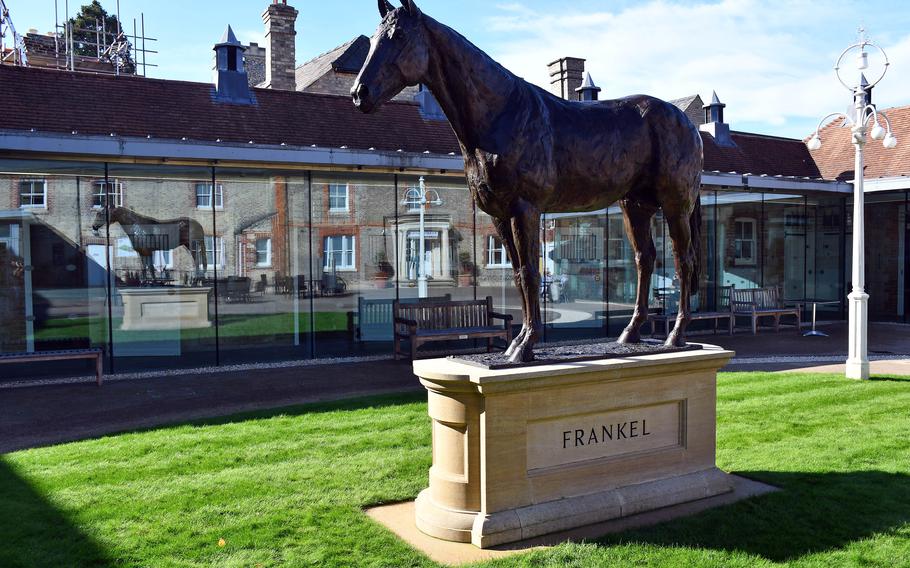 A statue of horseracing titan Frankel stands in the center of the courtyard at the National Horse Racing Museum in Newmarket, England. (Kyle Alvarez/Stars and Stripes)

The now-retired Frankel is one of the greatest horses ever to run on the track. His career lasted from 2010 to 2012, and he won all 14 of his races. In late 2011, he was the highest-rated racehorse on the planet, according to the World Thoroughbred Rankings.

A museum staffer told me that Frankel’s progeny fetch more than $250,000.

Twice a day, visitors can go on a behind-the-scenes tour of the Rothschild Yard, named after one of the wealthiest families in the modern world. A trainer and rider discuss their routine in the riding arena of the museum’s Rothschild Yard on Oct. 11, 2022. The National Horse Racing Museum works with an organization that trains retired racehorses to adjust to a new life after their racing career. (Kyle Alvarez/Stars and Stripes)

There, former racehorses are taught how to adjust to their new lives after they’ve called it a career. This portion of the museum is operated by an organization whose name neatly explains its purpose: Retraining of Racehorses.

I joined six others in taking the tour. We were shown what the horses do to form new habits and create new muscle memory to go from racehorse to riding horse.

We were lucky enough to see one of the trainers and a rider going through a routine in the arena with a former racehorse. Being able to see in practice what the guide was telling us lent more credibility to the tour. Young racehorses are taken to the training grounds in Newmarket, England, on Oct. 11, 2022. (Kyle Alvarez/Stars and Stripes)

Once it was complete, I was led back to the courtyard, where a few more displays entice visitors. One is an interactive horseracing simulator with various speeds, the highest being equivalent to how fast the horses go on the racetrack.

I was not feeling adventurous enough to try my hand at the simulator. For those who are as skittish as I was, there is the option of taking a trot on a mechanical horse. 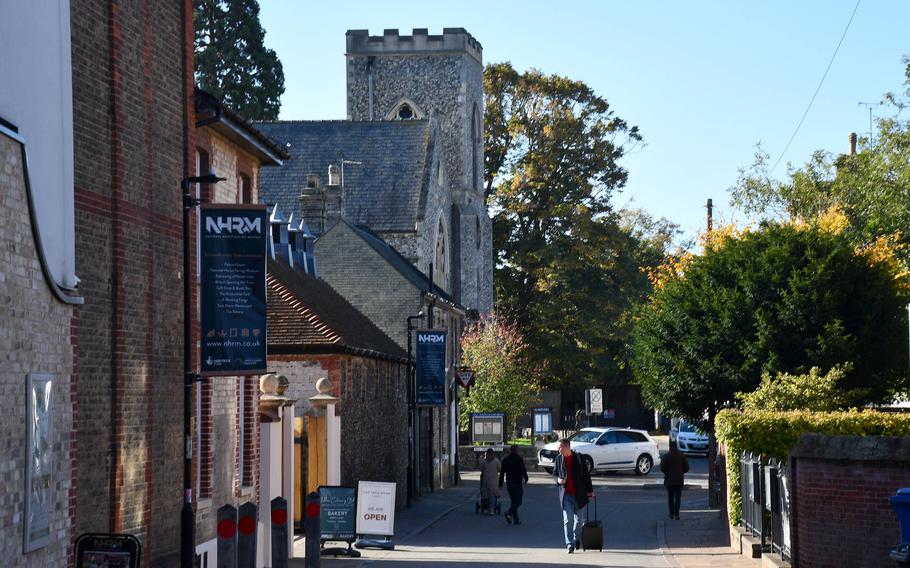 The National Horse Racing Museum is tucked away on a side street in Newmarket, England. The museum is open six days a week. (Kyle Alvarez/Stars and Stripes)

My museum visit continued across the street in the former residence of the Rothschild family. This area is dominated by a wide assortment of equine paintings, so true enthusiasts are likely to derive the most enjoyment from it.

For a novice like me, the museum visit was more purposeful tourism than immersion. I sought to connect with some of the queen’s life story, and the many images of her horseracing involvement humanized her in a way I hadn’t seen before. A mural honoring the greatest contributors to the world of modern horseracing hangs at Britain’s National Horse Racing Museum. Queen Elizabeth II was considered the greatest special contributor, as she was involved in the sport for over 70 years as a fan, owner, breeder and ambassador. (Kyle Alvarez/Stars and Stripes)

And of course, the storied sporting spectacle still has an avid following in the U.K., so in that sense, my visit was a bit of a bonding experience with the host country.

I walked away with a greater sense of fulfillment than I thought I would achieve, which is exactly how you want to feel when leaving a museum of any kind. 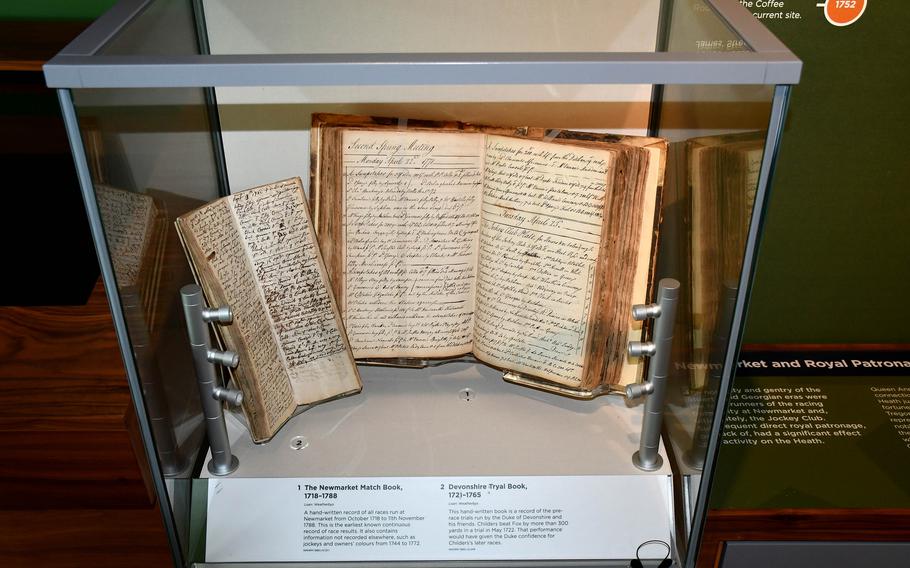 The National Horse Racing Museum displays many artifacts highlighting the early days of horseracing in Britain. A book dating from 1718 is among the items on display. (Kyle Alvarez/Stars and Stripes)