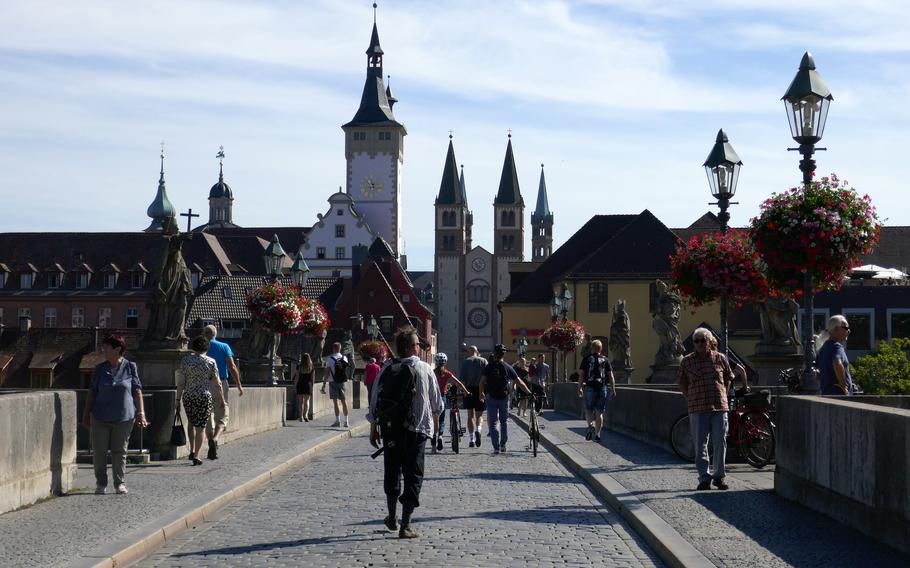 With the town hall tower and church steeples in the background, people walk across Wuerzburg, Germany’s Alte Mainbruecke, the old stone bridge across the Main River, into the old town. (Michael Abrams/Stars and Stripes)

The German city of Wuerzburg has a palace, a fortress, a cathedral, plenty of churches and an imposing City Hall, but the real heart of this Franconian town is the old stone bridge spanning the Main River.

And the bridge is a good place to enter the city. After parking on the west bank of the Main, we strolled across the Alte Mainbruecke’s cobblestone street. 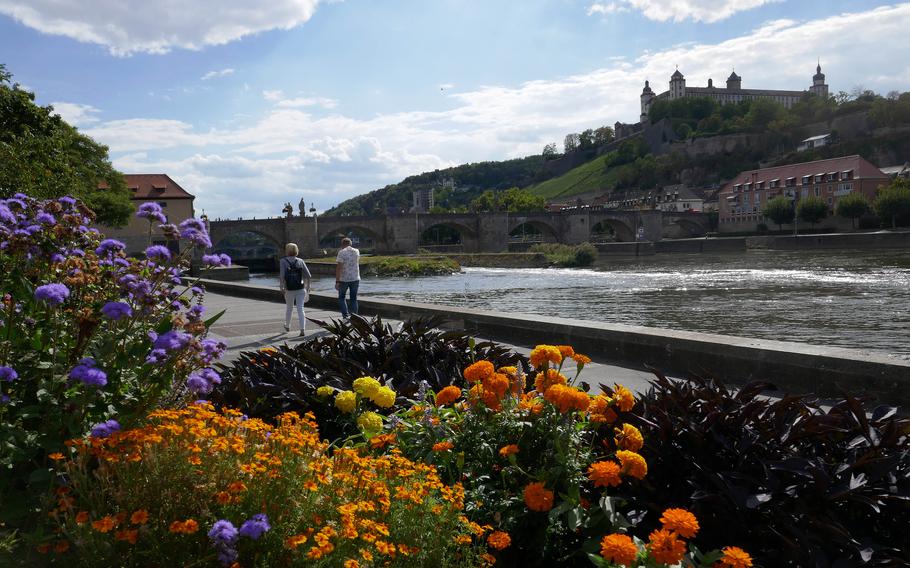 The promenade along the Main River gets you out of the hustle and bustle of Wuerzburg, Germany’s city center. In the background is the old stone bridge and atop the hill at right, Fortress Marienberg. (Michael Abrams/Stars and Stripes)

The towers and steeples of Wuerzburg’s old town rose in the distance welcoming us, but they would have to wait. Like other tourists, we couldn’t just cross the bridge without stopping to take a closer look.

Construction on the bridge began in the late 15th century, replacing an older span, but it wasn’t completed until 1703. It stands on eight arches and is about 58 feet wide and 607 feet long. 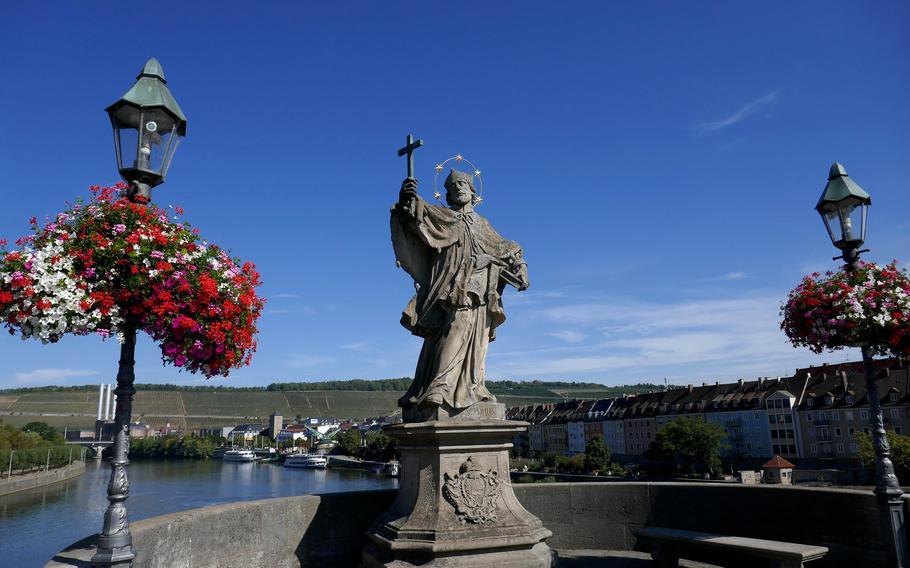 The statue of John of Nepomuk on the Alte Mainbrucke, the old stone bridge over the Main River in Wuerzburg, Germany. (Michael Abrams/Stars and Stripes)

About two decades after its completion, the 12 Baroque stone statues that line the bridge were installed, six on each side. They are a mix of saints and dignitaries.

While crossing the bridge, look back behind you to see Marienberg Fortress high atop a hill overlooking the river and the city center. Built around 1200, it was once the seat of the prince-bishops of Wuerzburg. Today it houses the Franconian Museum, boasting a Tilman Riemenschneider sculpture collection. 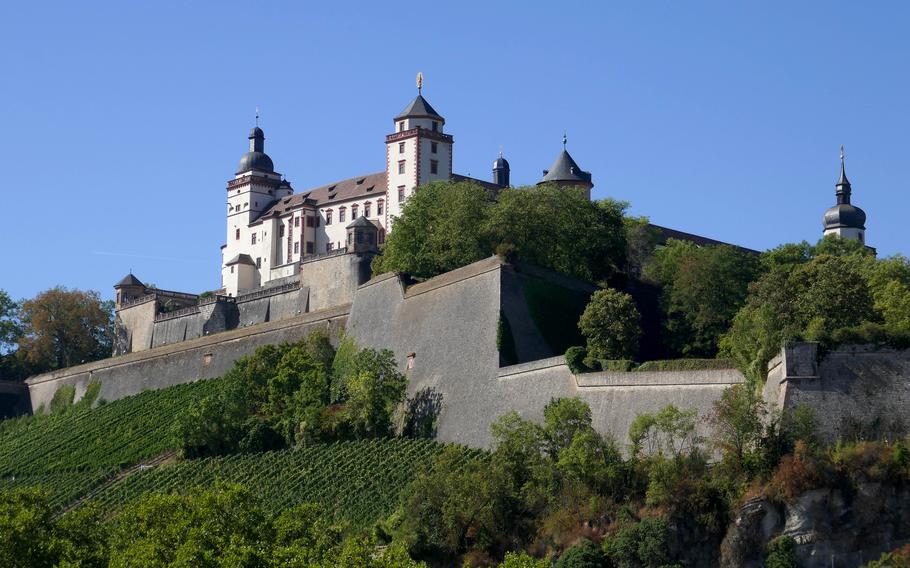 The Fortress Marienberg stands atop a hill overlooking the Main River across from Wuerzburg’s city center. Built around 1200, it was the seat of the prince bishops. Today, it houses the Franconian Museum. (Michael Abrams/Stars and Stripes)

The first building of note after you cross the river is the rathaus, or city hall, with its sleek, 180-foot-tall tower. It also houses the Ratskeller, a popular restaurant that features Franconian specialties.

Wuerzburg is in the heart of Franconia, a region known for its hearty food and quality wines. Popular here are, among other things, the Franconian bratwurst — which is much like its better-known version from Nuremberg but bigger — carp and Schaeufele, a roasted pork shoulder. 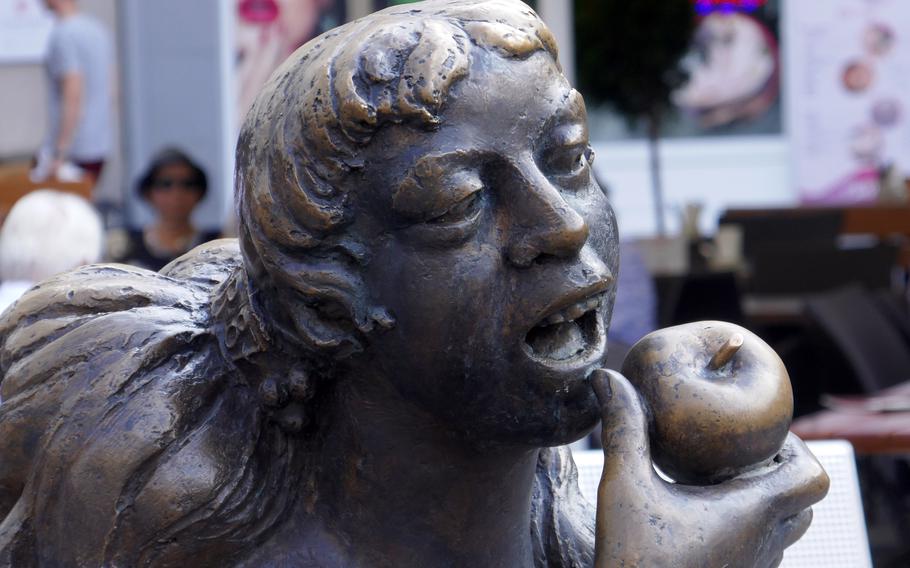 A nymph gets ready to bite into an apple, one of many figures on a playful fountain on Sternplatz in downtown Wuerzburg, Germany. (Michael Abrams/Stars and Stripes)

We followed signs to the marktplatz, or marketplace, where we came to two beautiful buildings, the late Gothic Marienkapelle church and the Falkenhaus, a former priests’ residence with an 18th century, ornate Rococo facade made of stucco. 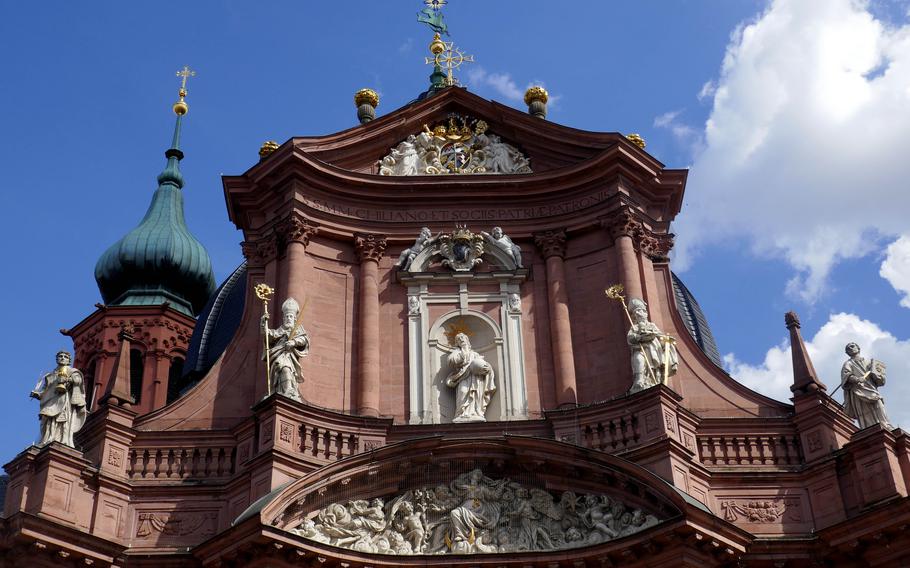 The ornate baroque facade of the Neumuenster basilica in Wuerzburg, Germany. (Michael Abrams/Stars and Stripes)

The tourist information office is inside. Stop in and get a sightseeing map. With it, you can follow a suggested walking tour or just choose the sights you want to see. We did the latter and strolled through the city’s expansive pedestrian zone. 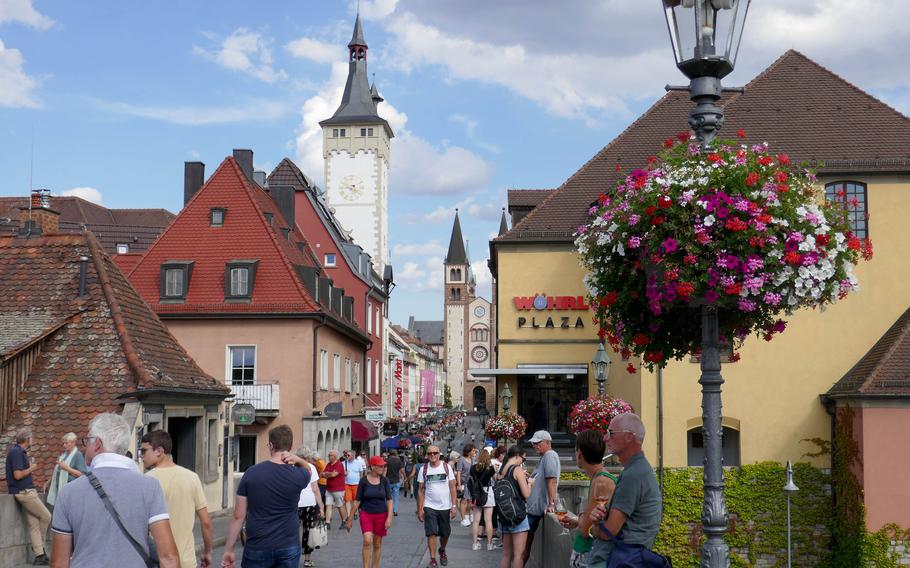 In the afternoon, many enjoy a glass of wine on the Alte Mainbruecke, the old stone bridge spanning the Main River at Wuerzburg. The city is in the heart of Franconian wine country. (Michael Abrams/Stars and Stripes)

Wuerzburg is known for lavish baroque and rococo architecture. Among the sights we saw were the Augustiner church, the Neumuenster basilica and St. Killian’s Cathedral. 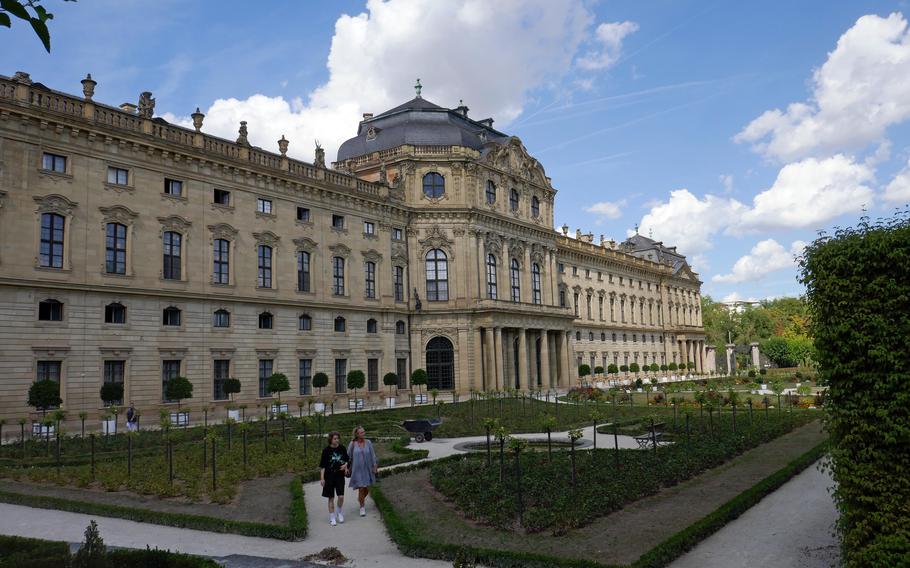 The Residenz in Wuerzburg, Germany, as seen from the Court Gardens. A UNESCO World Cultural Heritage Site, the palace was built between 1720 and 1744. (Michael Abrams/Stars and Stripes)

The city’s biggest baroque gem is the Residenz, the huge former palace of the prince-bishops. A UNESCO world cultural heritage site, it was built between 1720 and 1744.

You can see the inside on a guided tour, but on this sunny day, we chose to wander through the beautiful Court Gardens, with their trees, flower beds and fountains. 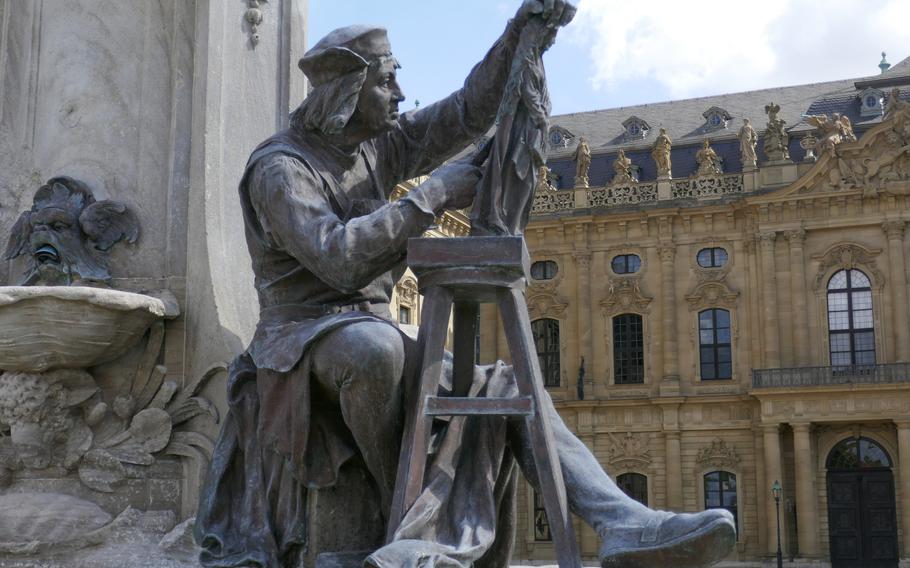 The statue of the great German sculptor Tillman Riemenschneider on the Franconia Fountain in front of the Residenz palace in Wuerzburg, Germany. (Michael Abrams/Stars and Stripes)

And many of their children were born at the Army hospital here. There’s not much left of the military’s presence, but judging by how much English we heard downtown, it seems to still be popular with Americans. 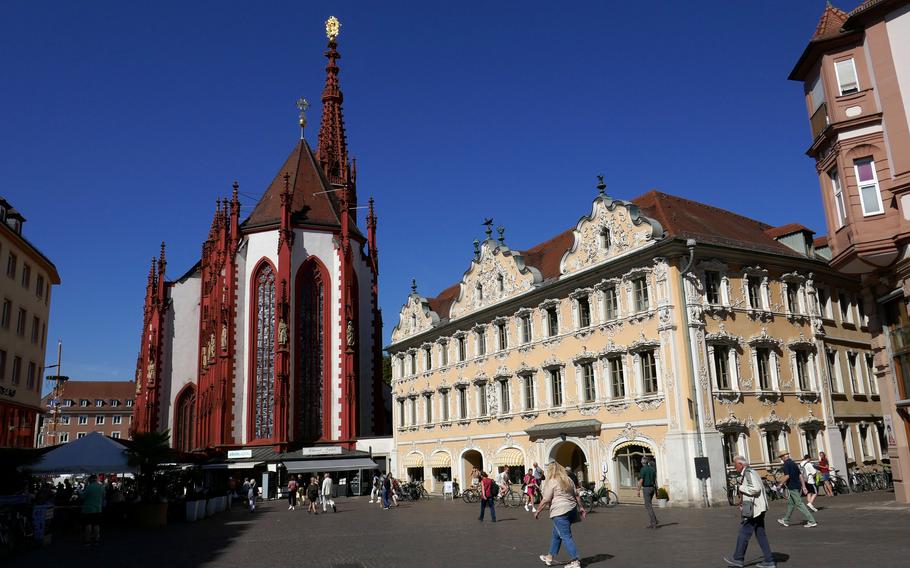 The Falkenhaus, with its 18th-century ornate stucco facade and the Marienkapelle, stand on Wuerzburg, Germany’s market square. Construction on the beautiful late Gothic church began in 1377. (Michael Abrams/Stars and Stripes)

We then strolled down to the river and walked along its banks back to the Alte Mainbruecke.

In the afternoon, it seemed as if the bridge had become an outdoor wine bar. A couple of shops and restaurants here sell wine by the glass. Tourists and residents alike mingled on the bridge, sipping good Franconian wine as the sun began to set behind Marienberg Fortress. 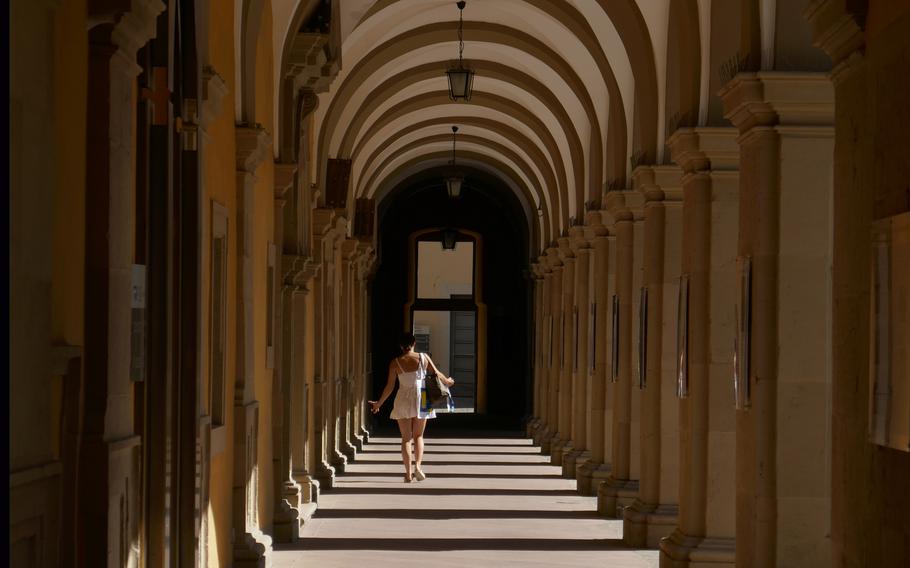 A woman walks along the colonnade of the Juliusspital in Wuerzburg, Germany. (Michael Abrams/Stars and Stripes)

Directions: From Wiesbaden, it is a 90-mile drive on the A3 to Wuerzburg; from Stuttgart, take A81 and A3 for the just under 100-mile drive; it is about 120 miles from Grafenwoehr via A9 and A3. In town, follow signs for parking. Wuerzburg also has a busy main railway station, with trains arriving from, among other places, Frankfurt, Nuremberg and Stuttgart.

Costs: We parked in the Alte Mainbruecke garage for 1.60 euros per hour. It’s a great place to start your visit, but parking places are very narrow and there is a height limit of 6.5 feet. The parking lot in front of the Residenz has no restrictions, and costs 2 euros per hour for the first two hours, then 1.50 euros for each additional hour.

Food: There are several restaurants in the center of town. The Ratskeller and the Weinstuben Juliusspital serve typical Franconian specialties. 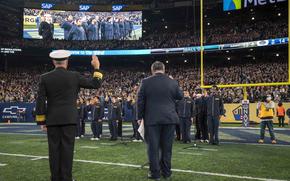