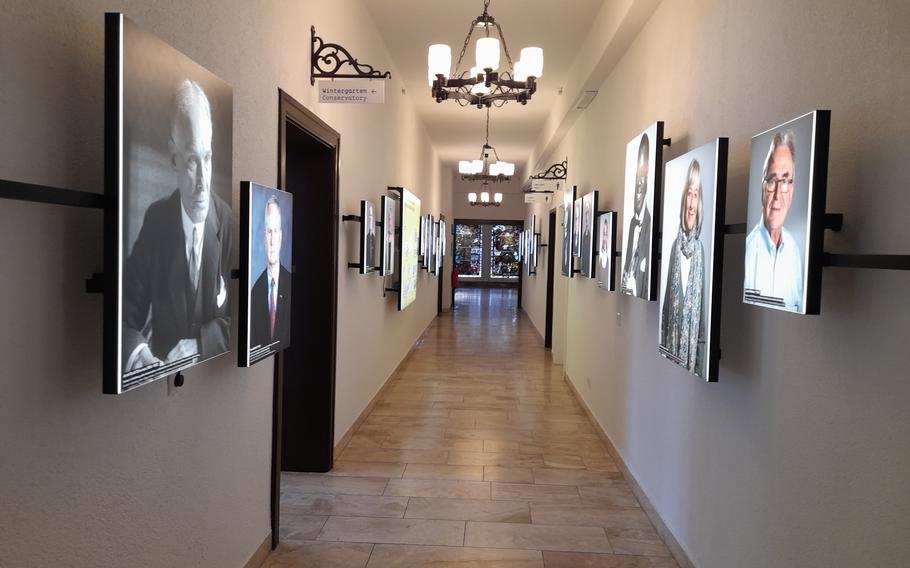 The ground floor portrait gallery at the Mark Twain Center for Transatlantic Relations features images of both well-known figures and everyday citizens whose lives intersected with Heidelberg. (Karen Bradbury/Stars and Stripes)

The newly opened Mark Twain Center in Heidelberg features, as one might imagine, a room devoted to the beloved American author and humorist, who spent three months in the area in the summer of 1878.

But how the German city by the Neckar River influenced Twain’s works is only a small fraction of what visitors will take away. For a better understanding of what’s at play here, look to the institution's full name: the Mark Twain Center for Transatlantic Relations. 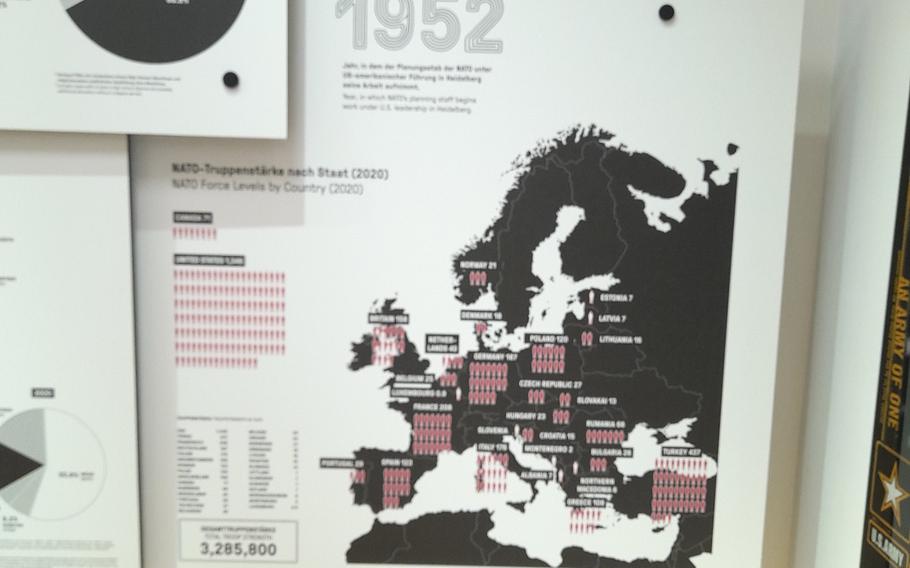 Graphics shed light on the composition and presence of U.S. military personnel stationed throughout Europe, as displayed at the Mark Twain Center for Transatlantic Relations in Heidelberg, Germany. (Karen Bradbury/Stars and Stripes)

The center is housed in the Campbell Barracks area, which contained U.S. Army Europe headquarters and key NATO offices from the early years after World War II until 2013, when those offices moved elsewhere..

It shines light on the American presence in Heidelberg over those decades, through good times and bad, the friendships built, the hardships endured and the enrichment of both cultures.

Just don't call it a museum. 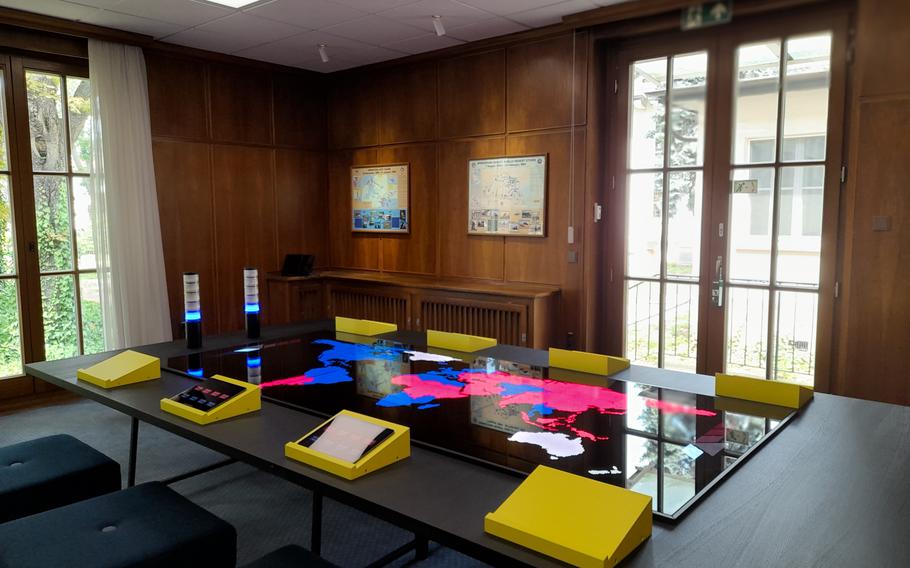 A refurbished room in the Mark Twain Center for Transatlantic Relations in Heidelberg illustrates a communications hub. (Karen Bradbury/Stars and Stripes)

The center's director, Uwe Wenzel, conceived of a space that could speak to a younger demographic without alienating older visitors. Self-guided tours with state-of-the art tablets and quirky pop-up graphics bring his vision to fruition.

The center's wealth is not in any monetary value held by the objects displayed, but in the story they tell. And like any good story, the backdrop makes all the difference. In this case, the Keyes Building.

Built for the Wehrmacht in 1937 during the remilitarization of Germany, the edifice has boldly propagandistic design elements, such as a stained glass window depicting three ideal soldiers throughout history. 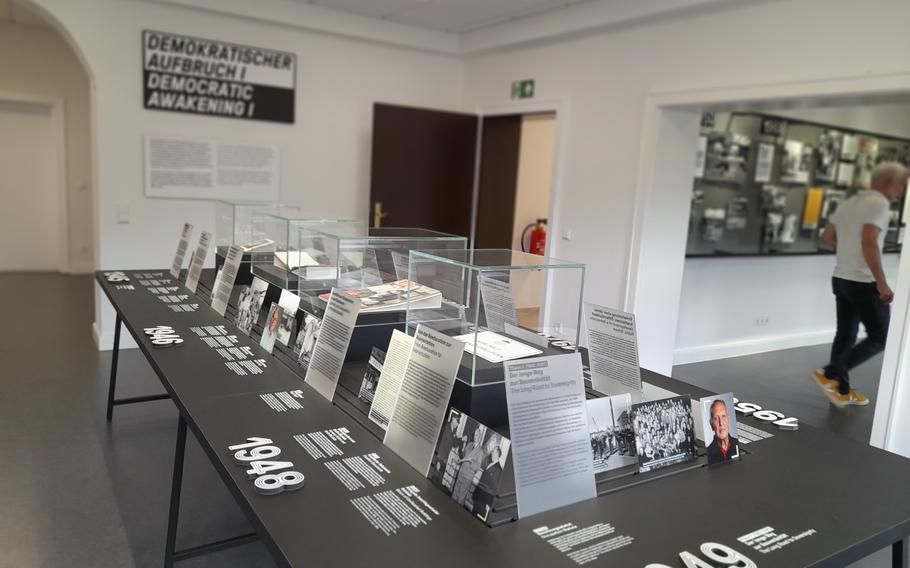 The Mark Twain Center for Transatlantic Relations is housed in the Keyes Building of the former Campbell Barracks. This room illustrates how the U.S. presence in Germany fostered a free press and democratic movements following World War II. (Karen Bradbury/Stars and Stripes)

Walking through the casino ballroom, subsequently repurposed to serve as a conference room, evoked thoughts of how this space might have given shape to the world we inhabit today, tying the past to the present.

The center’s heart is a multimedia exhibition titled “Join the Story: 200 Years of Transatlantic Perspectives.” The installations, objects and photographs occupy 18 rooms across two stories, and they unfold like a crash course in post-World War II history.

The hardship of the postwar years comes through in the recounting of a personal story about the quest to acquire a frying pan. The terror inflicted by the Soviet Union’s Red Army faction is brought to gruesome light through photos and an article about soldiers killed by a bomb at Campbell Barracks as they strode over to admire a friend’s new car.

Military dependents brought up in Germany will gaze with familiarity at memorabilia from Heidelberg High School displayed in a space set up as a classroom. 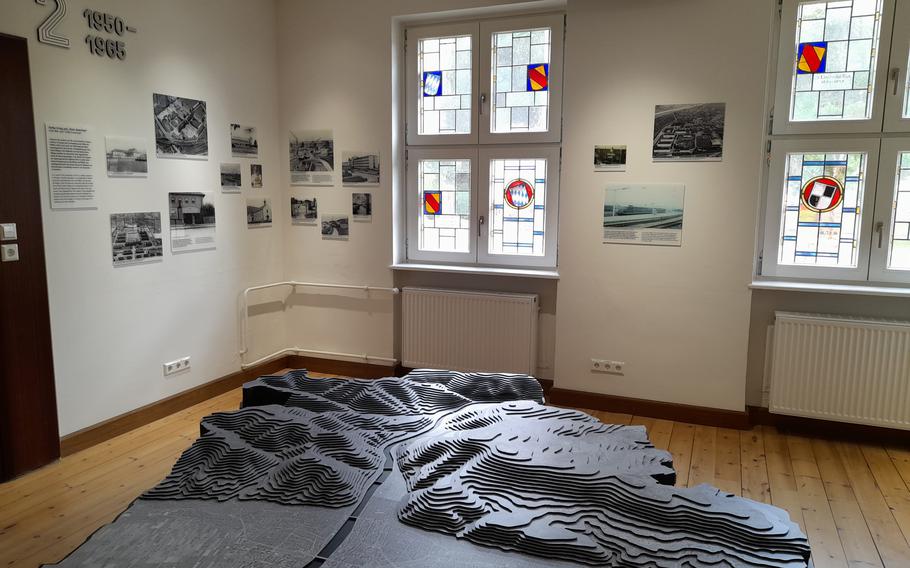 Visitors pass through more than a dozen rooms arranged along a timeline of the U.S. military presence in post-World War II Heidelberg at the Mark Twain Center for Transatlantic Relations. (Karen Bradbury/Stars and Stripes)

Wenzel's vision for the center, whose cost of 5.5 million euros was provided by the city of Heidelberg and the federal German government, was not just a space that could speak to visitors of all ages.

A room explaining the workings of the United States’ all-volunteer army helps visitors from a nonmilitary background understand more about the nature and circumstances of the millions of Americans who chose to serve their country. 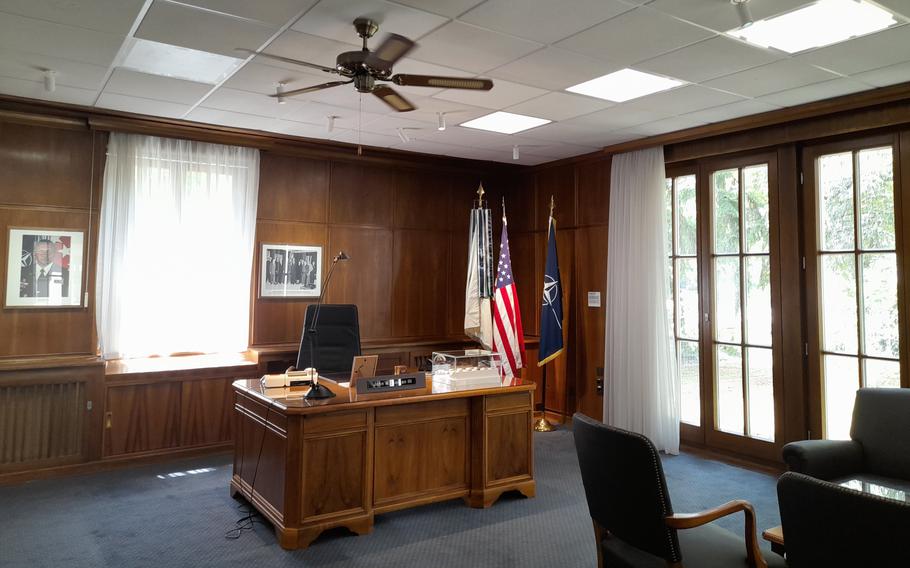 Storytelling through multimedia is most boldly realized in the space depicting the commanding general’s room. The large but understated office of Army Lt. Gen. John W. Morgan III, a past commanding general of NATO’s Headquarters Allied Force Command Heidelberg, speaks of power and prestige in a low-tech way.

It contrasts sharply with the installation found in the adjoining panic room, an attempt to get inside the head of the man in charge in a moment of crisis. 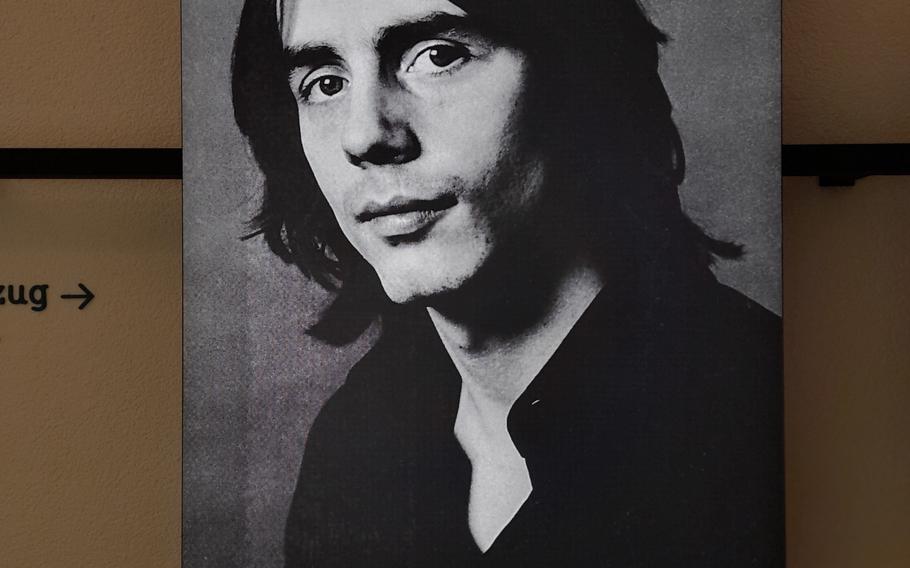 A photo of the singer Jackson Browne hangs in the Mark Twain Center's portrait gallery. (Karen Bradbury/Stars and Stripes)

Of the many exhibits all but guaranteed to dampen eyes and cause lumps in the throat, the hall featuring larger-than-life photographs of the everyday Germans and Americans who worked and lived side by side through the decades is a sure contender.

But for many visitors, the audio-video installations in which the eyewitnesses tell their stories firsthand will win the day.

While the presence of Twain is not always front and center, it echoes throughout in the form of quotes from his works displayed by many of the entrances and exits of the rooms. Some quotes have aged quite well.

Like this one: “In a monarchy, the king and his family are the country; in a republic it is the common voice of the people. Each of you, for himself, by himself and on his own responsibility, must speak.” 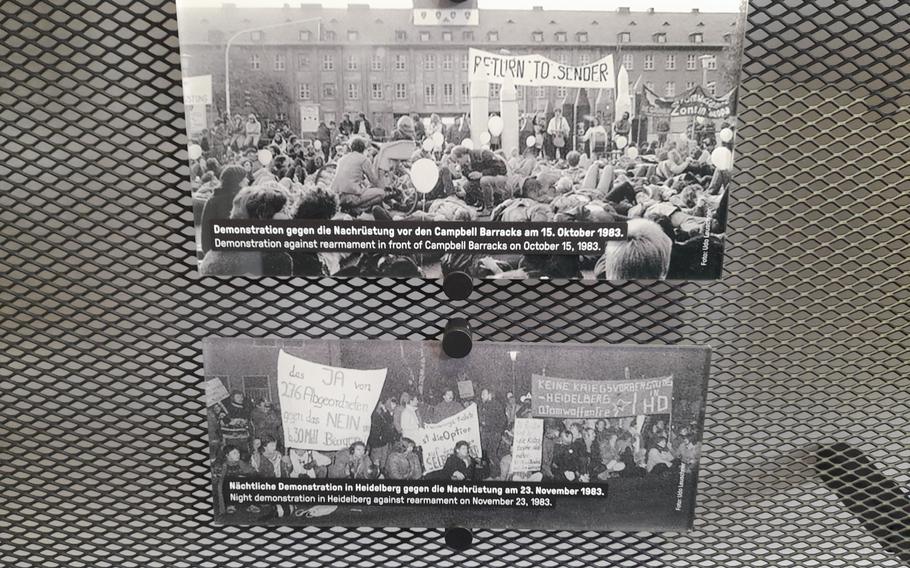 Heidelberg's citizens were aware of but not always in agreement with the actions of the U.S. military, and protests such as this one against rearmament occasionally took place. (Karen Bradbury/Stars and Stripes)

While the center, which celebrated its official opening May 22, feels polished and complete already, its leadership has no plans for the space to remain static.

People with photos, objects or stories of their own to tell about Heidelberg are invited to take part in a “history harvest” by getting in touch directly with the center.