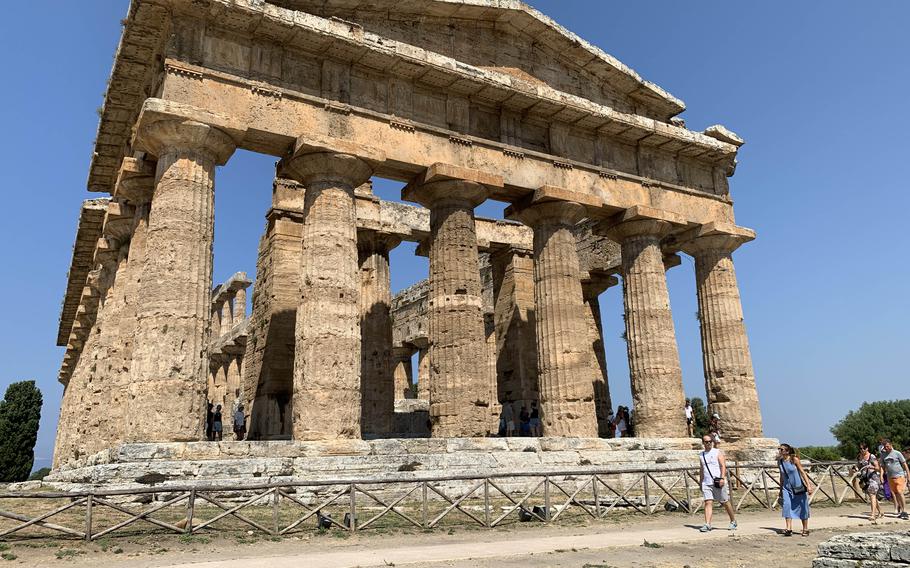 A UNESCO World Heritage site, the ruins at Paestum include three Greek temples built between 560 and 460 B.C. The most well-preserved is the Temple of Neptune, which visitors can enter and explore. (Alison Bath/Stars and Stripes)

With the famed ruins of Pompeii looming large in people’s imaginations, many of Italy’s smaller and lesser-known ancient sites often are overlooked.

One such place is Paestum, a long-ago Greek colony situated along the Tyrrhenian Sea about 60 miles south of Naples.

The ruins at Paestum include three well-preserved Greek temples built between 560 and 460 B.C. Visitors can enter two of them and marvel at the massive structures graced by Doric columns, one of three orders of ancient Greek architecture. 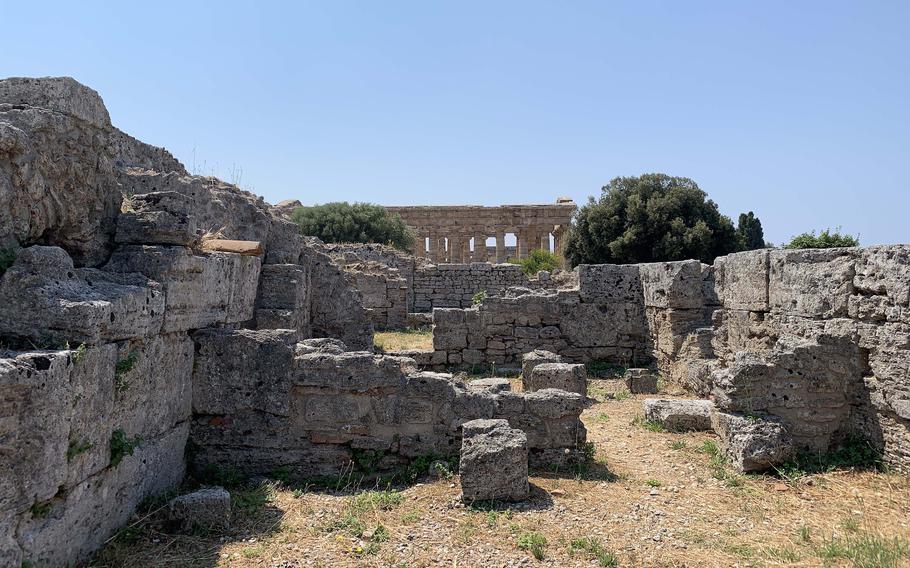 The Temple of Neptune is visible from the ruins of Paestum. The ruins include a Roman amphitheater, market area and well-preserved walls that surround the city. (Alison Bath/Stars and Stripes)

A UNESCO World Heritage site, Paestum was founded in the 7th century B.C. by Greek colonists, who called it Poseidonia. The area likely was already occupied by humans when they arrived, according to the Italian website Siti Archeologici d’Italia.

The city later came under the control of the Lucanians, an ancient Italic tribe, and finally the Romans in 273 B.C., who named it Paestum, the website states.

Tours of the ruins are self-guided via an app in several languages that includes an interactive map, text and audio. It’s available for download on iOS or Android. There also are informational signs posted throughout the park. 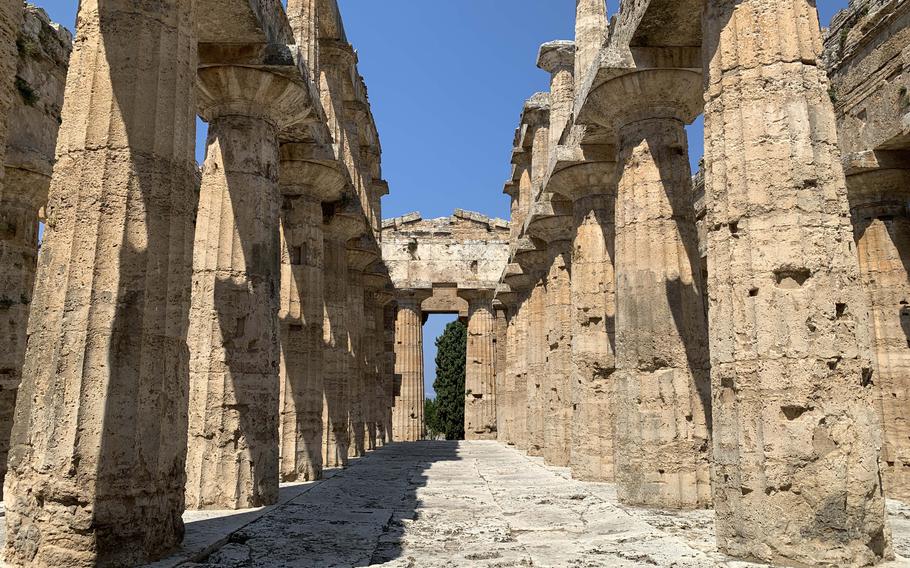 Visitors can enter and explore the Temple of Neptune, one of three temples at the ruins of Paestum in Italy. (Alison Bath/Stars and Stripes) 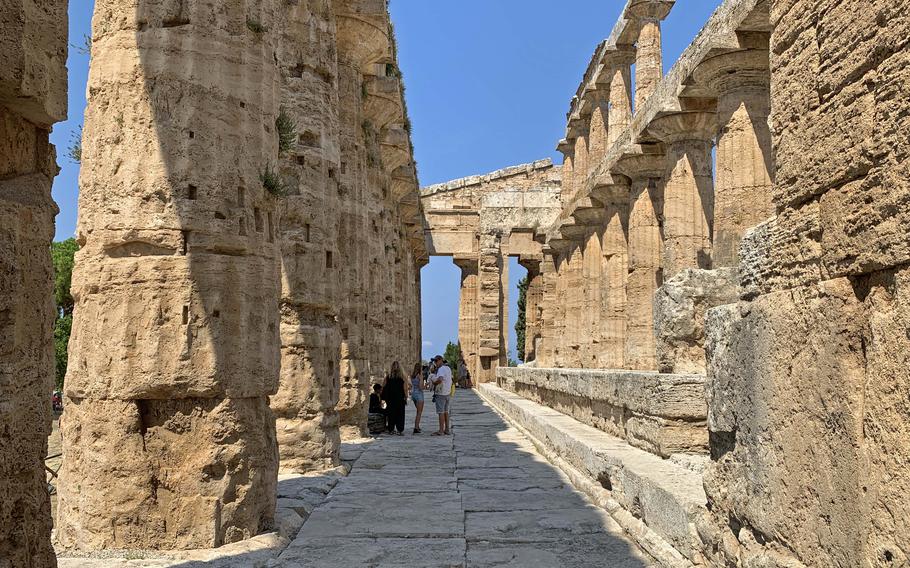 Visitors can enter and explore the Temple of Neptune, one of three temples at the ruins of Paestum in Italy. (Alison Bath/Stars and Stripes)

Once inside, visitors will be drawn to the Temple of Neptune, to the right of the entrance. Built around 460 B.C., the temple is the most well-preserved of the three, with much of its elements, except the roof, still intact.

Visitors can enter and explore the temple, but access is controlled to limit the number of people within the structure at any one time.

Farther down a concrete pathway is the Temple of Hera, also known as the archaic temple or basilica. It’s the oldest of the three temples. 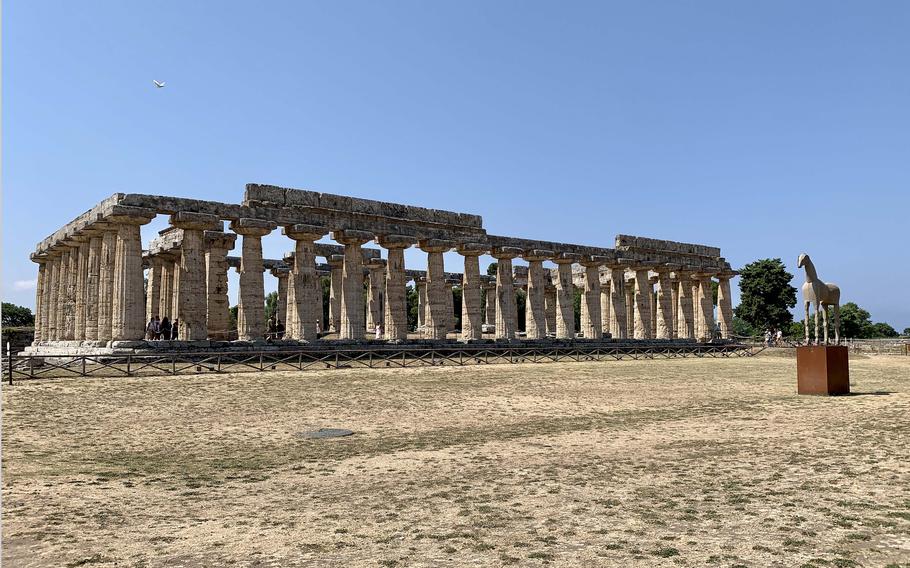 Built from 560 to 520 B.C, the Temple of Hera is the oldest of the three temples at the ruins of Paestum in Italy. (Alison Bath/Stars and Stripes)

Construction of it took 40 years, and archaeologists believe work started in 560 B.C., according to the Paestum app. People also can enter part of this temple or walk around it via a path system that meanders throughout much of the park. 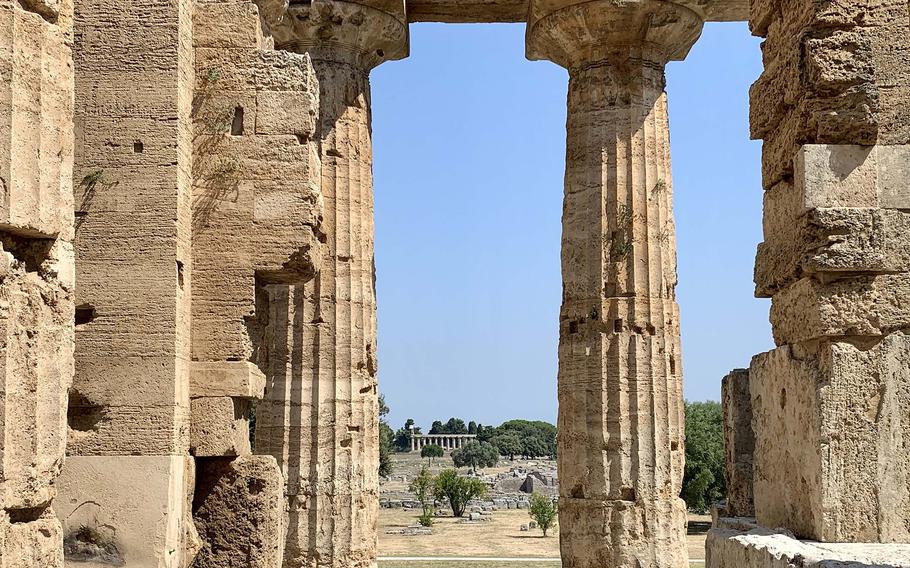 The Temple of Athena is visible from the Temple of Neptune at the ruins of Paestum in Italy. (Alison Bath/Stars and Stripes) 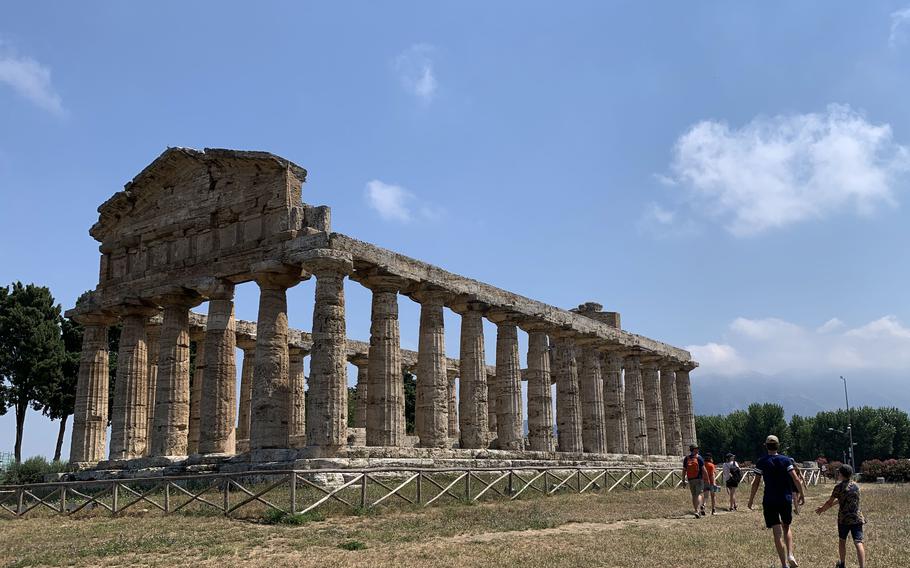 The Temple of Athena in Paestum, Italy, was built around 500 B.C. Visitors can walk around the ruins of the temple but cannot enter it. (Alison Bath/Stars and Stripes)

Across the ruins to the north is the Temple of Athena, situated on a small hill that was artificially expanded to accommodate the structure. This temple, built around 500 B.C., later was used by the Romans to worship the same goddess, whom they called Minerva, according to the app.

The area around the temple is known as the northern sanctuary and contains evidence of many altars and other structures. Arrows and shields — Athena was the goddess of battle strategy and wisdom —  have been found in the sanctuary. 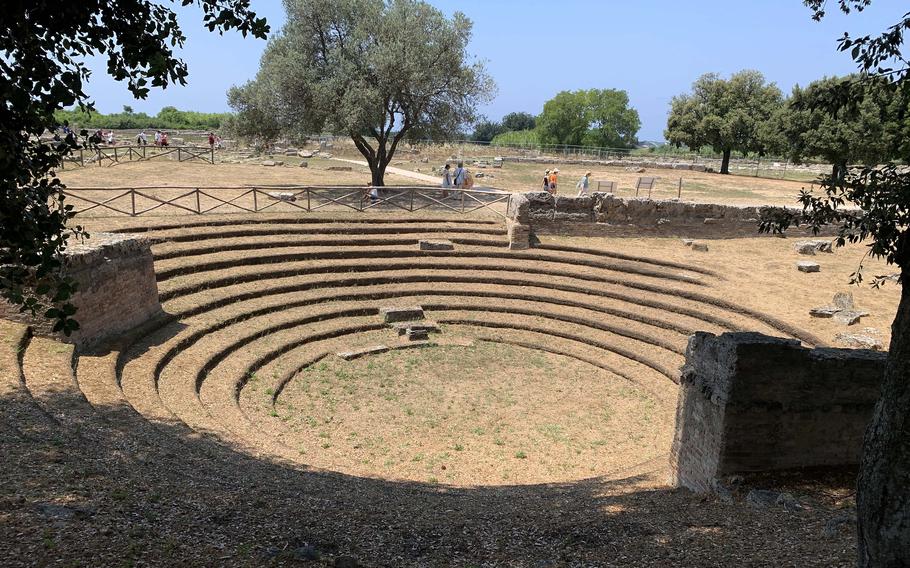 The ruins at Paestum, Italy, include a public meeting place or assembly, a Roman amphitheater, market area and well-preserved walls that surround the city. (Alison Bath/Stars and Stripes)

In addition to the temples, the ruins at Paestum include four city gates and a wall about 3 miles long that surrounds the city. A public meeting place, homes, a marketplace and shops, a sanctuary and pool and other elements of daily life also can be explored.

Another park highlight is the Roman amphitheater, where Paestum’s citizens would go to watch gladiators, wild beasts and, sometimes, executions, according to the app. 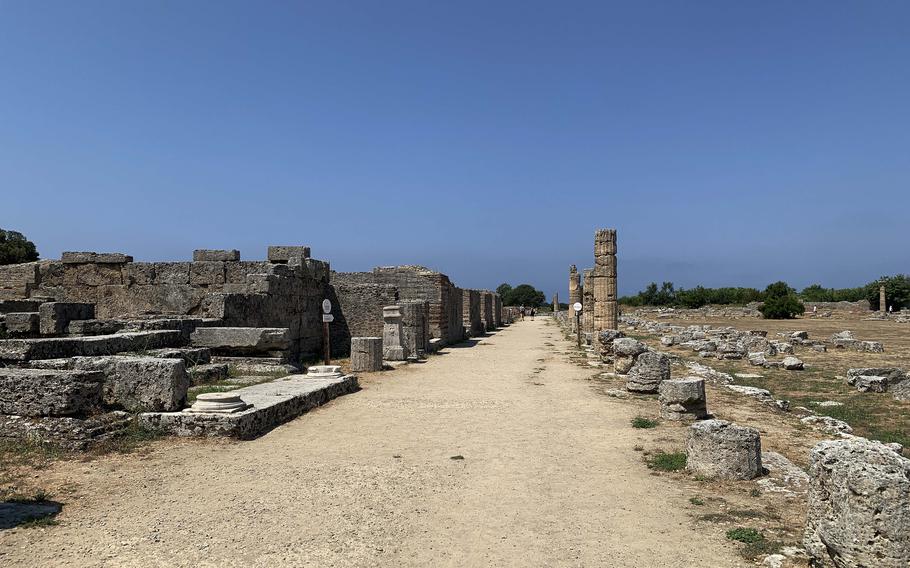 The ruins of Paestum include a Roman amphitheater, market area, roads and well-preserved walls that surround the city. (Alison Bath/Stars and Stripes)

While the Romans built over much of the city, they kept the original Greek city plan, including streets, in place, the app states.

Not to be missed is the Museo Archeologico Nazionale di Paestum, which is on Via Magna Graecia across from the archaeological site. The museum includes pottery, tools and other items found in the town and nearby necropolises and a sanctuary. 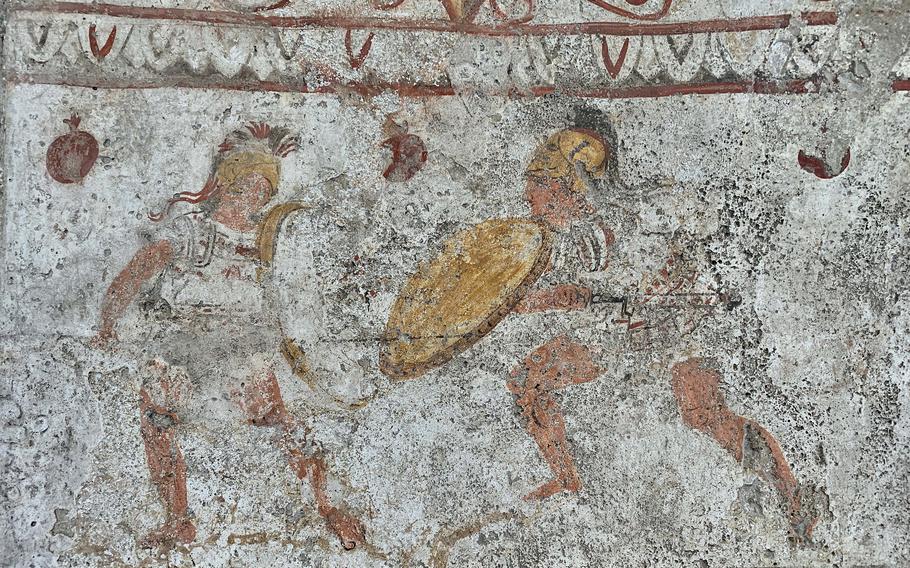 Paestum also includes a museum that features pottery and other artifacts, such as well-preserved frescoes from a tomb. (Alison Bath/Stars and Stripes)

It also includes five frescoes found near Paestum in the Tomb of the Diver, named for a funerary painting that depicts a young man diving into a pool of water.

Archaeologists believe that the panel of the diver and four others portraying a symposium were created around 480 to 470 B.C.

The panels are amazingly well-preserved with vivid colors. While it’s unknown for whom the tomb was made, it’s easy to picture an athletic man cut down in his youth.

Paestum is at its best in the spring and fall, when the weather is cooler. If you visit during the summer, be certain to have plenty of water, and wear a hat and sunscreen.

While there are bars, cafes and souvenir stands outside the park, there are no shady spots or benches at the archaeological site where visitors can sit down and take a break.

With its full access to the archaeological history of southern Italy, the parks and museum offer an easy trip from Naples and a chance to take in the grandeur of Greek architecture and ancient Roman living in a choose-your-own-adventure format.

It’s an ideal spot for families, history buffs and people seeking a fun day trip to indulge their curiosity in early Mediterranean culture.

How to get there: By car, Paestum is an about an hour and 45 minutes from Naples. Take the train from Naples central station to Paestum. Cross the street directly in front of the station to walk west down Strada Provinciale 168 to Via Magna Graecia. The park is an about 10-minute walk from the train station. For train timetables and ticket prices visit: https://www.trenitalia.com/it.html

Cost: From March to November, adult admission is 12 euros, which includes the archeological sites at Paestum and Velia and the national museum at Paestum. The ticket is valid for three days. From December to February, the cost is 6 euros. There are reduced prices for children and families, and an annual pass also is available.

Hours: 8:30 a.m.-7:30 p.m. daily (holidays may affect hours or opening). There are cutoff times for last entry to the parks and museum.