The Docu Center Ramstein houses an exhibit showcasing the history of Americans in the German state of Rheinland-Pfalz. The museum is comprised of shipping containers in Ramstein-Miesenbach, Germany. A special summer exhibit highlighting 70 years of Americans at Ramstein Air Base runs through August. (Jennifer H. Svan/Stars and Stripes)

The story of how Ramstein Air Base came to be and how much local sway the largest U.S. military community overseas carries is told in a rather unlikely place: inside a series of bright-red shipping containers.

The Docu Center Ramstein houses a collection of photographs, documents and other materials aimed at preserving and sharing the history of Americans in the state of Rheinland-Pfalz.

Central to that record is the air base, which put the small farming village of Ramstein on the map 70 years ago, and the center is marking the anniversary with a special exhibit. Running through the end of August, it looks back at seven decades of U.S. presence at Ramstein.

When construction began in April 1951 on two separate but adjacent bases, “thousands of workers came from all over Germany,” said Mario Aulenbacher, the center’s director. “It was a very small village. Then suddenly, thousands of strangers were around here.”

Landstuhl Air Base opened in August 1952, followed by Ramstein Air Station the following spring. The border between the former bases runs roughly along the current Kissling Memorial Drive.

“The Americans brought their big cars; there were airplanes flying around. Many houses here have been built because of the money Americans brought,” Aulenbacher said. “It changed everything.”

The anniversary exhibition aims to highlight important “points of this whole very complex history,” Aulenbacher said. “We cannot show the whole history, but we try to show interesting parts of it.”

The temporary display includes black-and-white photographs that reveal glimpses of base life over the decades. In the 1950s, bingo was popular for both Americans and Germans at the former Ramstein NCO club, as evidenced in one of many photos by photographer Walter Matheis. 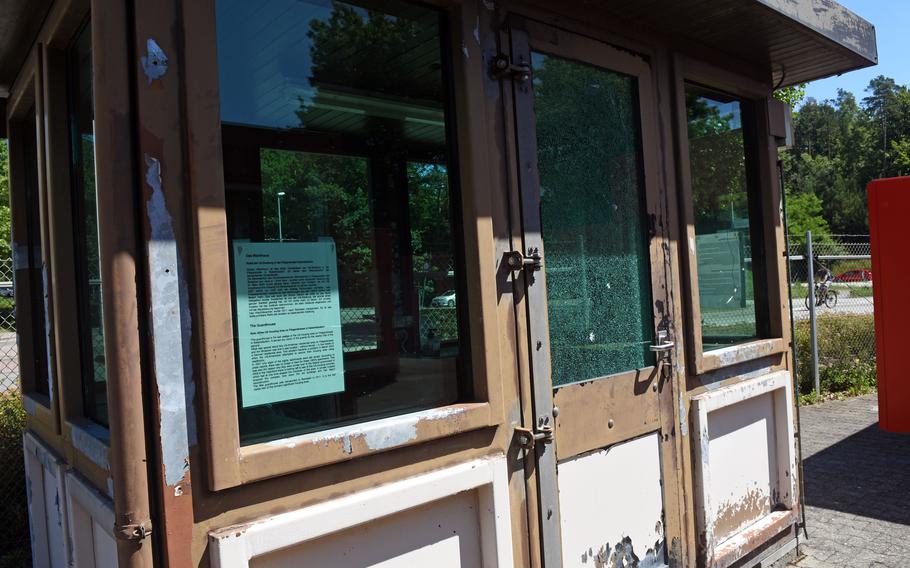 A guard shack from a former U.S. military housing area in Kaiserslautern can be seen at the Docu Center Ramstein in Ramstein-Miesenbach, Germany. (Jennifer H. Svan) 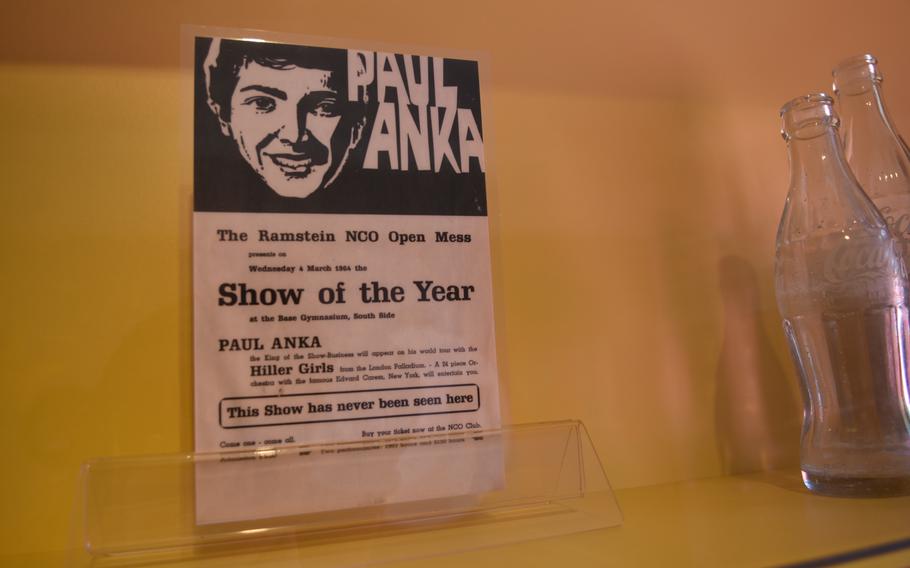 A promo for a 1964 Paul Anka show at Ramstein Air Base, Germany, is on display at the Docu Center Ramstein in Ramstein-Miesenbach, Germany. (Jennifer H. Svan) 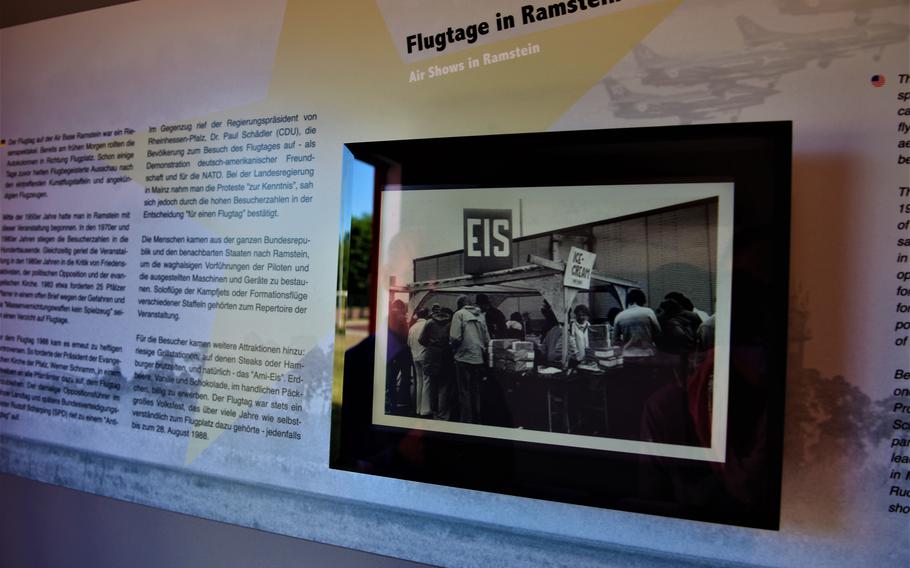 A display in the Docu Center Ramstein in Ramstein-Miesenbach, Germany, shows a photo of people buying American ice cream at an air show at Ramstein Air Base. The base for years hosted an annual air show, which drew hundreds of thousands of visitors from across Germany and Europe. (Jennifer H. Svan) 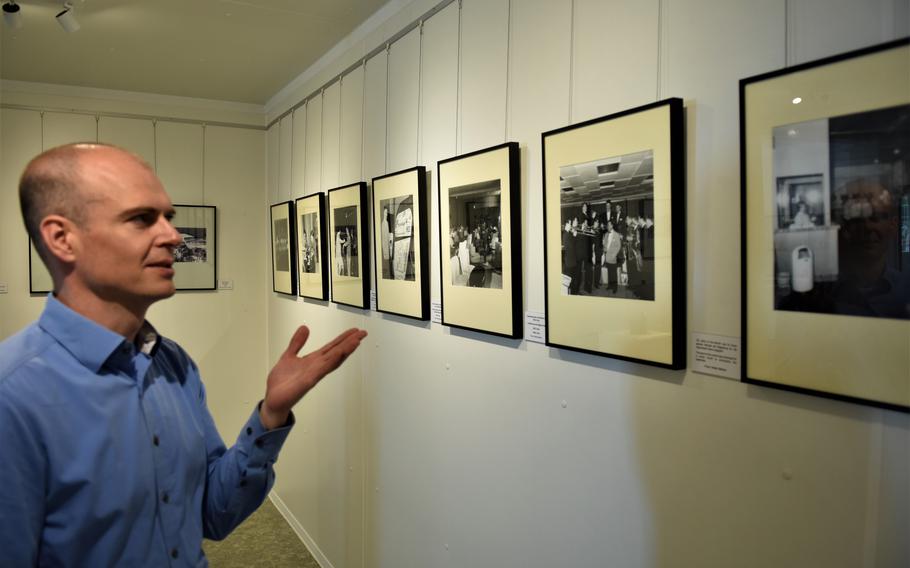 Mario Aulenbacher, the director of the Docu Center Ramstein in Ramstein-Miesenbach, Germany, talks about photographs on display depicting life on Ramstein Air Base as part of a special exhibit marking 70 years of Americans in the area. (Jennifer H. Svan) 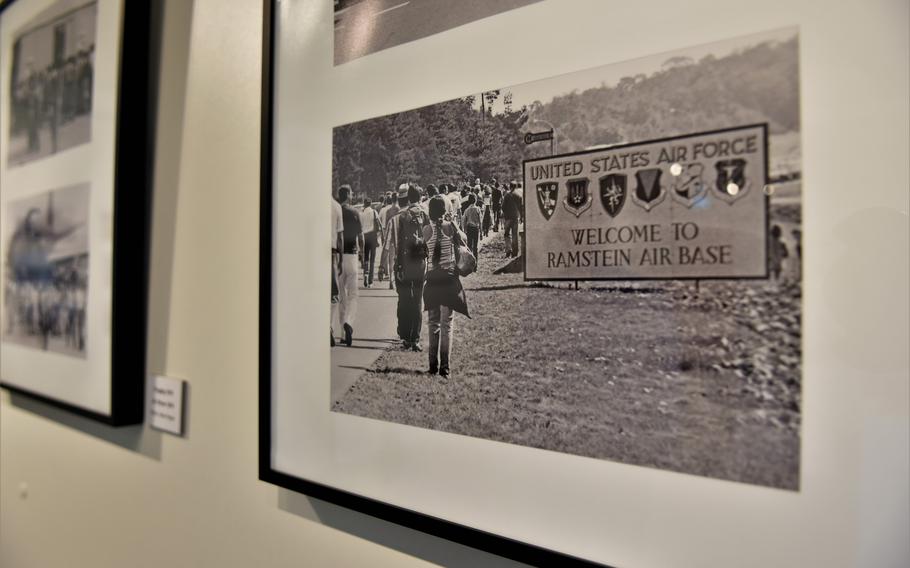 A photograph displayed at the Docu Center Ramstein in Ramstein-Miesenbach, Germany, shows crowds walking to Ramstein Air Base in the late 1970s for the annual air show. U.S. bases in the region used to be open, allowing Germans to come on base for special events. (Jennifer H. Svan)

A late-1970s photo by Hans Paque portrays a crowd streaming past an old Ramstein Air Base sign on the way to the annual air show.

Other items in the exhibit include a June 13, 1958, copy of a yellowed Ramstein-Landstuhl “RAMJET,” an old base newspaper. One of the headlines announces the availability of the polio vaccine. A black rotary telephone from 1965 was once used in a general’s office.

Among more modern memorabilia is a T-shirt from an annual memorial run to honor Airman 1st Class Zachary Cuddeback, who was killed in a shooting attack at Frankfurt Airport on March 2, 2011.

The “container village” was set up in 2013 in Ramstein-Miesenbach with funding from the city’s community association.

Besides the 70th anniversary exhibit, there are permanent exhibits that explore the broader history of the American presence throughout the region.

Docu Center research found more than 170 U.S. military sites in Rheinland-Pfalz during the past six decades. One of the smallest of these was just a radio mast atop about 10 square feet.

A map with color-coded pins contrasts the number of abandoned facilities with those still in use. The former far outnumber the latter, showing just how large the U.S. military footprint in the area once was.

One container explores the importance of base clubs for cultural development in postwar Germany, a place where locals were introduced to big bands, dancing and legendary American jazz musicians such as Ella Fitzgerald, Chet Baker and Count Basie.

Another container is devoted to the history of the Ramstein air show, including the 1988 disaster that killed 70 people and injured hundreds of spectators, putting an end to future air shows in Germany.

A compilation of witness observations includes a command chief master sergeant who watched the disaster unfold from the VIP area on the roof of the control tower building.

“This container was meant to be a little place where people can come and remember the victims,” Aulenbacher said.

Before the air show crash, the annual event drew hundreds of thousands from across Europe and was a high point of the year for many living in the region, Aulenbacher said.

The center highlights some of the happier memories associated with the day, such as a photograph of people in line to buy American ice cream.

The ice cream “was very popular and it was hard to get,” Aulenbacher said. “People would come early and get ice cream, bring it back home and then go see the show.”

Address: Schernauer Strasse 46, Ramstein-Miesenbach. Near the Azur swimming pool, across the street from the Reichswald-Gymnasium.

Hours: 2-5 p.m., Tuesday through Sunday from March to November

Information: Online: dc-ramstein.de; email: info@dc-ramsteinde; phone: +49 6371-838-005. Most displays are in English and German. Guided tours are available upon request.