The walls of Framlingham Castle remain in good shape, despite first being built in the 12th century. There are 13 wall towers, which are connected by suspended bridges that could be removed if enemies climbed the walls, isolating the would-be invaders. (Kyle Alvarez/Stars and Stripes)

Framlingham Castle lies in the county of Norfolk, an area that has seen many historically significant moments for England.

The attention-grabber for my family was the story of Mary Tudor, aka “Bloody Mary.” She was proclaimed England’s first queen regnant in 1553 at Framlingham Castle, which was built in the 12th century.

From the tri-base area of RAF Lakenheath, Mildenhall and Feltwell, it’s a pleasant one-hour drive through the English countryside. The market town of Framlingham is also charming and was bustling with activity on the day we visited.

The parking at the front gate of the castle might be the only downside, depending on the number of visitors. It isn’t much of a parking lot.

The scale of the castle took our breath away as we approached. Imagining the engineering developed to build such structures in the 12th century, I was awestruck.

When we made it through the main gate, we were greeted with a large open courtyard to the right surrounded by the castle walls. In the castle’s prime, a chapel and the Tudor rooms once stood in the courtyard. Now, only remnants of them can be seen. Visitors walk to the main gate of Framlingham Castle in July 2022. The castle has had many owners since its construction in the12th century. But in 1553 was owned by Mary Tudor, the first queen regnant of England. (Kyle Alvarez/Stars and Stripes)

To the left of the main gate lies the main building, which has three parts: the Red House, the workhouse and the great halls. Inside is where the tour starts. A combination of buildings erected in 1664 are situated within Framlingham castle. The door to the left of the red building leads to the castle dungeon. (Kyle Alvarez/Stars and Stripes)

While many prominent people spent time at the castle, the most famous was Queen Mary, a Catholic and daughter of King Henry VIII. In 1553, she rallied support from her base in the castle and deposed the Protestant Lady Jane Grey, known as the “nine-day queen.”

After the tour, we went down to the cafe and grabbed sandwiches, scones, tea and the like. We then stopped at the gift shop and found a few things that piqued our interest. 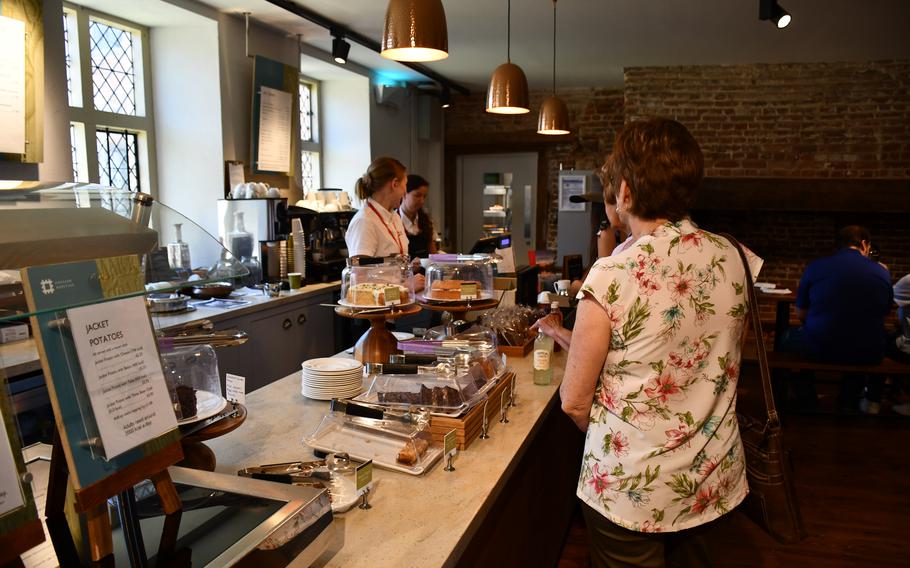 The café with seating area and gift shop are inside the workshop portion of the building that lies on the inside of the courtyard of Framlingham Castle. The workshop was built in 1664. (Kyle Alvarez/Stars and Stripes)

Free samples of gin and mead were being offered. Not being much of a gin person, I went for the mead, and it was delicious. The wife joined me and we bought a bottle for ourselves.

We then found a few knight-themed toys for the kids. My daughter was especially drawn to the wooden sword and the stuffed horse on a stick. She loved riding her hobby horse in the courtyard afterward and raising her sword, pretending to be a warrior princess.

Then my wife saw a gift she wanted to give me that truly made the experience special: a replica 13th century sword. I’m a big fan of “Lord of the Rings” and other books in the fantasy genre as well as games like Dungeons and Dragons. 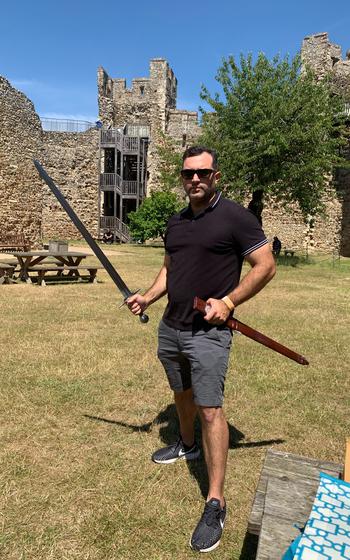 We sat outside in a shaded area in the courtyard, which was a nice break from the hot summer day. My 4-year-old daughter and 11-month-old son found space aplenty to run around and play.

I’ve quite enjoyed visiting several English heritage sites. So far, though, Framlingham Castle is my favorite. My family gained a lot of precious memories on this trip.

If you are looking to get even more bang for your buck, the castle hosts several events throughout the year. A knights’ tournament is happening Aug. 6-7. A medieval encampment will put such activities as weapons repair, period cooking and camp life on full display. The assorted events only enhance the delight of a visit to Framlingham Castle.