Vintage Germany: A watch on the Rhine and a wine in Ruedesheim 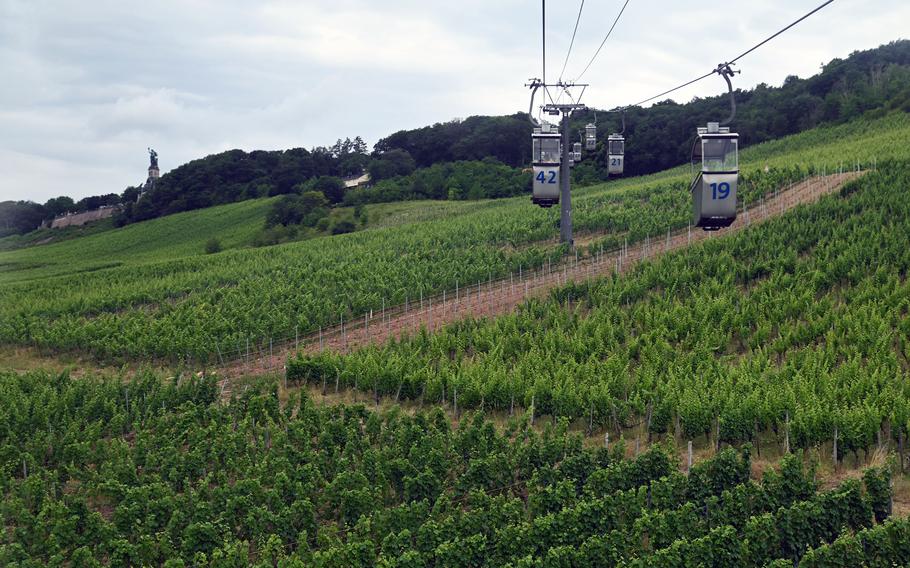 Gondolas glide over the vineyards of Germany's Rheingau region between Ruedesheim and the Niederwald Monument, which can be seen in the distance at left. (Michael Abrams/Stars and Stripes)

High on a hillside above the Rhine River, Germany looks down from atop the massive Niederwald Monument, which commemorates victory in the 1871 Franco-Prussian War and the unification of Germania under Kaiser Wilhelm I.

There are many ways to get up to the monument, but the most scenic is by cable car from Ruedesheim am Rhein.

About 20 miles from Wiesbaden, the quaint town on the right bank of the river is a tourist hot spot in the Rheingau, perhaps Germany’s premier wine-producing region, with its famous rieslings.

My wife and I climbed in a two-person gondola and were soon gliding over the vineyards toward the crest of the hill. The twin spires of St. Hildegard Abbey could be seen off in the distance. 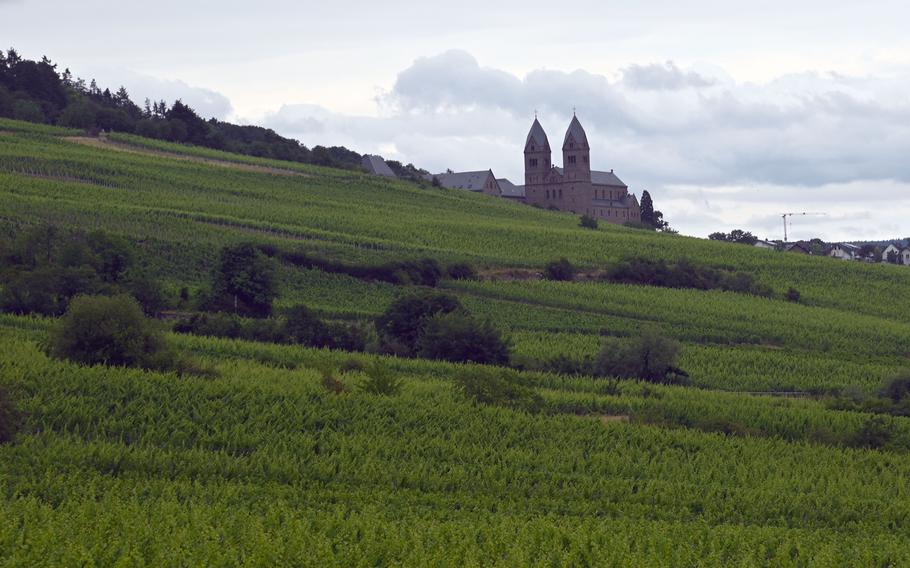 A view of the St. Hildegard Abbey in the vineyards, seen from the cable car between Ruedesheim and the Niederwald Monument. (Michael Abrams/Stars and Stripes)

From the cable car station, it is a short stroll to the monument. Construction began in 1877, and the monument was inaugurated in 1883 by the kaiser himself.

It is an imposing edifice, 125 feet high and weighing about 75 tons. The 34-foot-tall Germania looks over her lands.

Beneath her are two angels, one holding a sword and blowing a trumpet in a depiction of war, and the other holding an olive branch and a cornucopia, representing peace. 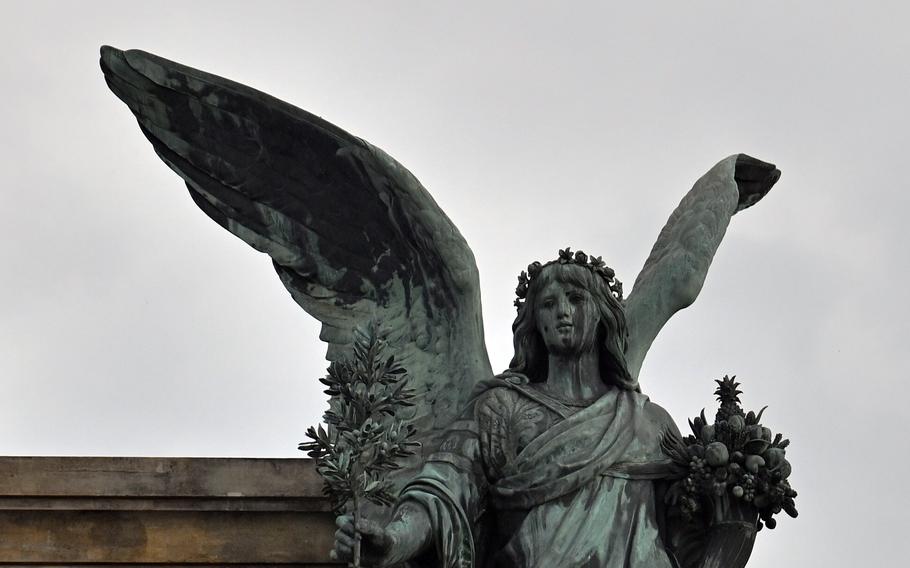 A statue of an angel representing peace is part of the ensemble that makes up the Niederwald Monument near Ruedesheim, Germany. Opposite it is an angel blowing a horn as a depiction of war. (Michael Abrams/Stars and Stripes)

Also worth noting is the life-size relief portraying Wilhelm, then king of Prussia, and his supporters. Underneath are the words to the song sung by his troops, “Die Wacht am Rhein,” meaning “The Watch on the Rhine.”

After inspecting the monument, we joined the other tourists in enjoying the wonderful view of the Rhine below.

The monument sits in the middle of the Niederwald landscape park, originally laid out in the mid-18th century by a Count Ostein, who wanted to use it as a hunting ground. 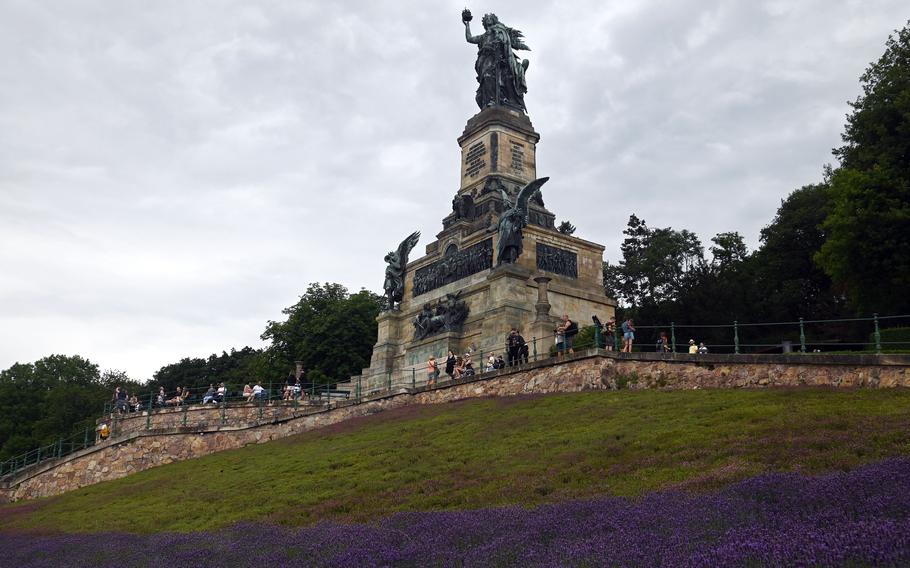 The 125-foot-tall Niederwald Monument towers above the Rhine River near Ruedesheim, Germany. It honors the German victory in the 1871 Franco-Prussian War and the unification of Germany under Kaiser Wilhelm I. (Michael Abrams/Stars and Stripes)

Today, it features a Greek-style round temple built in the 18th century. Overlooking the Rhine, it has been a popular subject for landscape artists over the years. When we were there, a bride and groom were using it and the river as a backdrop for their wedding pictures. 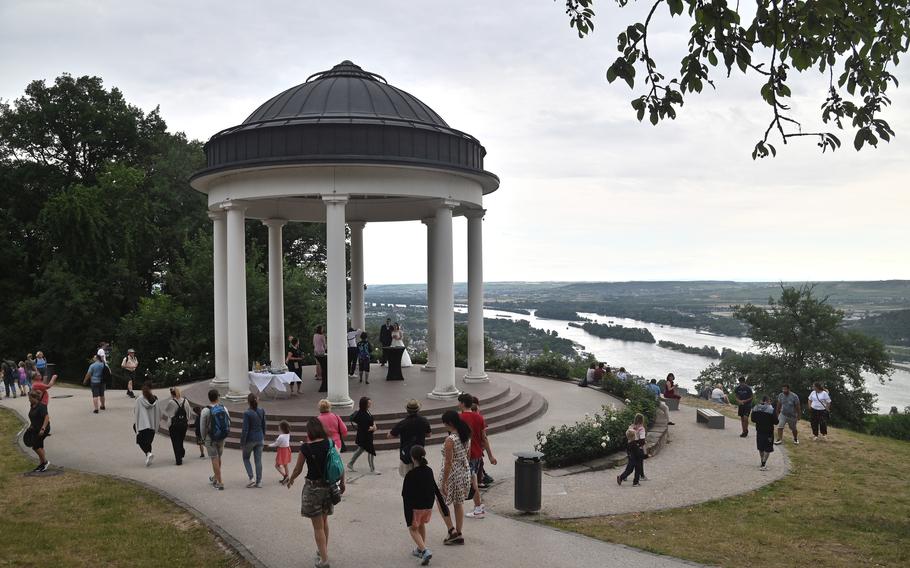 The Greek-style round temple was built in the 18th century and reconstructed in the 20th century. Overlooking the Rhine River, it has been a popular subject for landscape artists over the years. (Michael Abrams/Stars and Stripes)

We hopped on the cable car for the ride back to Ruedesheim, passing above hikers and the Winzerexpress, a small train that takes tourists through the vineyards.

Back in town, we joined the throngs of tourists making their way up and down Drosselgasse. Ruedesheim’s most famous street, it is lined with wine taverns, restaurants and cafes. 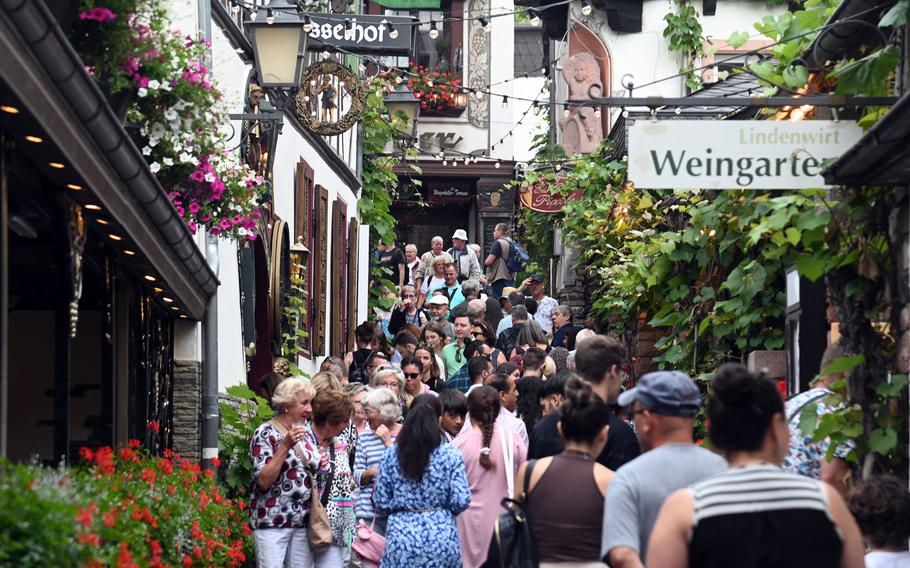 Hordes of tourists make their way along the Drosselgasse in Ruedesheim, Germany. Lined with wine taverns, restaurants and cafes, it is the main attraction in this wine-producing town on the Rhine River. (Michael Abrams/Stars and Stripes) 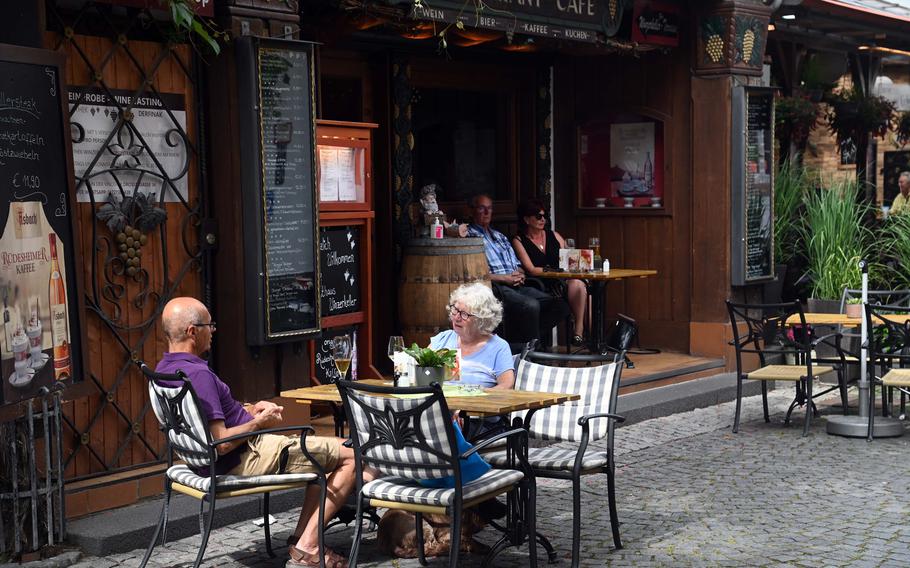 Visitors to Ruedesheim, Germany, enjoy drinks at a restaurant on Oberstrasse, in the city’s old town. Ruedesheim is a popular wine-producing town on the Rhine River, west of Wiesbaden. (Michael Abrams/Stars and Stripes) 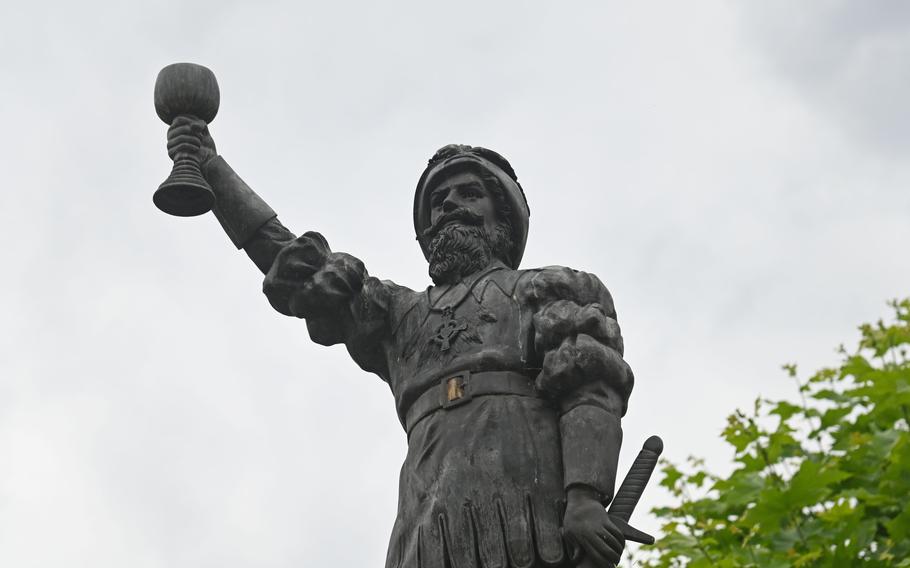 A nobleman with sword and wine glass tops the fountain on Ruedesheims market square. The town is in the center of the Rheingau, probably Germanys best-known wine-producing region, with its famous rieslings. (Michael Abrams/Stars and Stripes)

While touristy, it is a good place to try a Rheingau riesling and traditional German cuisine. We, on the other hand, kept on wandering through the town’s cobblestone lanes past wineries and half-timbered houses.

Inside the most imposing of the latter, the Broemser Manor, is Siegfried’s Mechanical Music Cabinet, a museum of mechanical self-playing musical instruments.

Getting away from the crowds, we walked until we came to the Broemserburg, an ancient castle built around 1000. Also called the Niederburg, it houses the Rheingauer Weinmuseum. 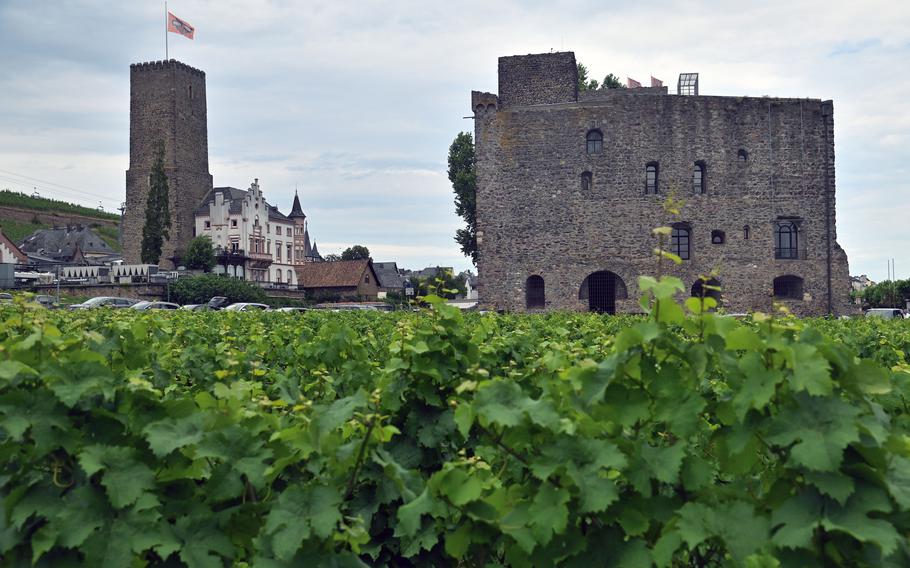 The Boosenburg, left, and the Niederburg, also called the Broemserburg, at right, in Ruedesheim, Germany. The formers tower was built in the 12th century, the later dates back to about 1000, and is home to a wine museum, which is closed for renovations at the moment. (Michael Abrams/Stars and Stripes)

The museum is closed for renovations, but luckily for us, there was a free concert in the castle’s expansive courtyard. The nearby Hochschule Geisenheim University’s winery was selling wine.

As we sipped Rheingau vintages, we enjoyed the music and watched the hillside parade of gondolas, this time from afar. 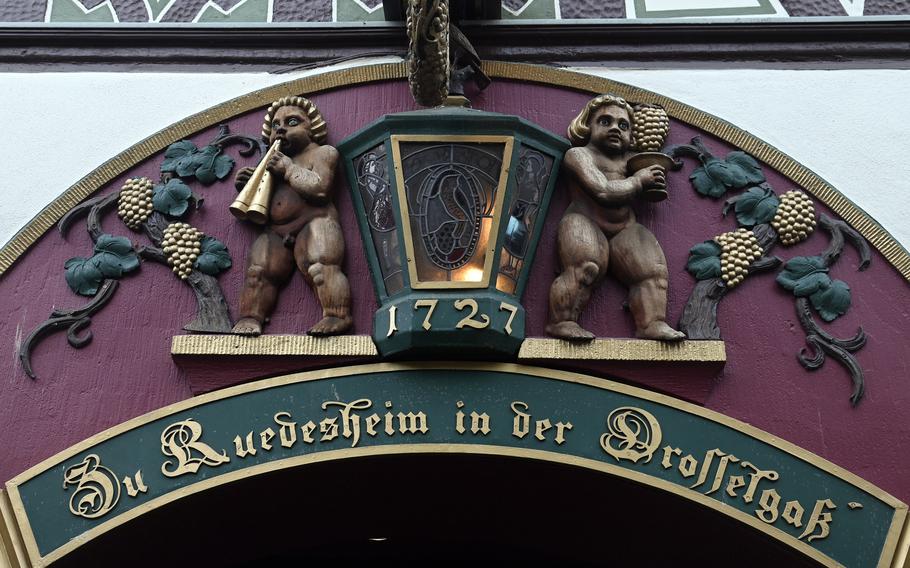 Ornate carvings decorate the door frame of the Drosselhof, the oldest inn on Drosselgasse, a wine tavern-lined pedestrian lane in Ruedesheim am Rheins old town. (Michael Abrams/Stars and Stripes)

Directions: Ruedesheim is about 20 miles west of Wiesbaden on highway B42. It’s a little over 50 miles from Kaiserslautern and includes a ferry ride from Bingen. Follow signs for parking.

Times: You can visit Ruedesheim and the Niederwald Monument anytime. At the moment, the cable car to the monument runs from 9:30 a.m. to 7 p.m. Monday to Sunday.

Costs: Parking is between 1.30 and 1.50 euros per hour in town. A single trip (either up or down) on the cable car costs 6.50 euros for adults and 3.50 euros for children. Round trip is 10 euros and 5 euros respectively.

Food: There are plenty of places to eat, especially on Drosselgasse. Most offer German and local Hessian specialties, and of course wine from the Rheingau.

Information: The city’s website is ruedesheim.de. Info for the cable car is at seilbahn-ruedesheim.de/en.