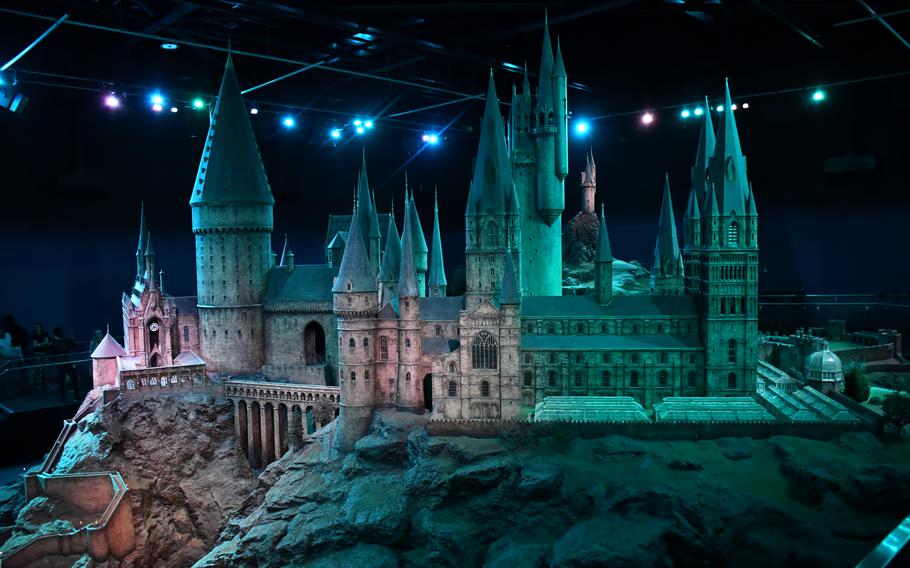 Visitors at the Warner Bros. studio tour The Making of Harry Potter admire the miniature model of Hogwarts School of Wizardry used during the movies. (Kyle Alvarez/Stars and Stripes)

Ever since I read “Harry Potter and the Sorcerer’s Stone” in 2002, I’ve wanted to be a professional quidditch player.

Unfortunately, 20 years later that aspiration is still on the back burner. If only Elon Musk would reveal his quidditch plans to the world.

I was, however, recently able to understand the magic behind the Harry Potter films by taking the Warner Brothers studio tour The Making of Harry Potter for a look behind the scenes of J.K. Rowling’s worldwide phenomenon.

The studio is in the outskirts of London, about a 90-minute drive for those stationed in the tri-base area of RAFs Lakenheath, Mildenhall and Feltwell.

Pulling up to the studio parking lot, my family and I knew it would indeed be a magical experience as we were welcomed by three very large statues of the life-size chess pieces that Harry, Hermione and Ron used in the chess puzzle in the first book and movie.

As you walk inside past security, you’re immediately in the presence of a giant Ukrainian Ironbelly dragon statue that the three main heroes rode on to escape Gringotts Bank in the eighth movie, “Harry Potter and the Deathly Hallows, Part 2.” It’s hard not to be impressed with its sheer size. A model prop of the Ukrainian Ironbelly from the movie “Harry Potter and the Deathly Hallows” hangs in the main hallway of the Warner Bros. studio tour The Making of Harry Potter near London. (Kyle Alvarez/Stars and Stripes)

Also at the entrance is a small coffee shop and, on the other side of the dragon, a dessert shop and restaurant oozing that “Harry Potter” feel. The dessert shop was a life-size version of the container of the chocolate frog candy found in the “Potter” universe.

We had lunch at the restaurant, which offered sandwiches, pizzas, burgers and fish and chips. We then visited the dessert shop and ordered milkshakes, cookies and brownies.

After that, we began our studio tour. It was fun, eye-opening and mesmerizing at times. We passed through the sets the actors worked on during the 10 years it took to film the eight “Harry Potter” movies. A replica scene from when Harry Potter met Ron Weasley on the Hogwarts Express from the movie “Harry Potter and the Sorcerer’s Stone.” (Kyle Alvarez/Stars and Stripes) 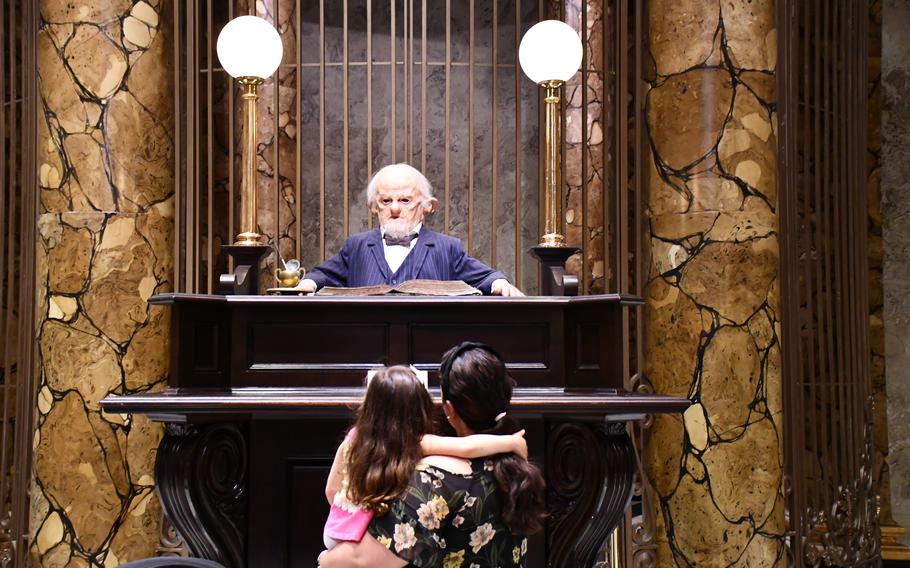 My wife and daughter admire a mannequin at the Harry Potter movie studio tour in England. (Kyle Alvarez/Stars and Stripes)

We went from the Great Hall to the Gryffindor Common Room to the potions classroom that the late Alan Rickman would broodingly occupy as Professor Snape.

The tour also showed us behind-the-scenes aspects of how the movie creators brought the books to life, including makeup and costumes, miniatures and camera perspective. And my personal favorite: a behind-the-curtain look at quidditch.

We got to create and purchase mini movies of us riding broomsticks through London using the same green screen technology from the films.

The Forbidden Forest walkthrough was spooky, and I was surprised that my 4-year-old wanted to keep going after seeing Aragog, the giant spider that Hagrid took care of, coming down from the ceiling.

My wife particularly enjoyed walking through Diagon Alley and the grand finale: a Hogwarts Castle model that is 50 feet in diameter and truly awe-inspiring. 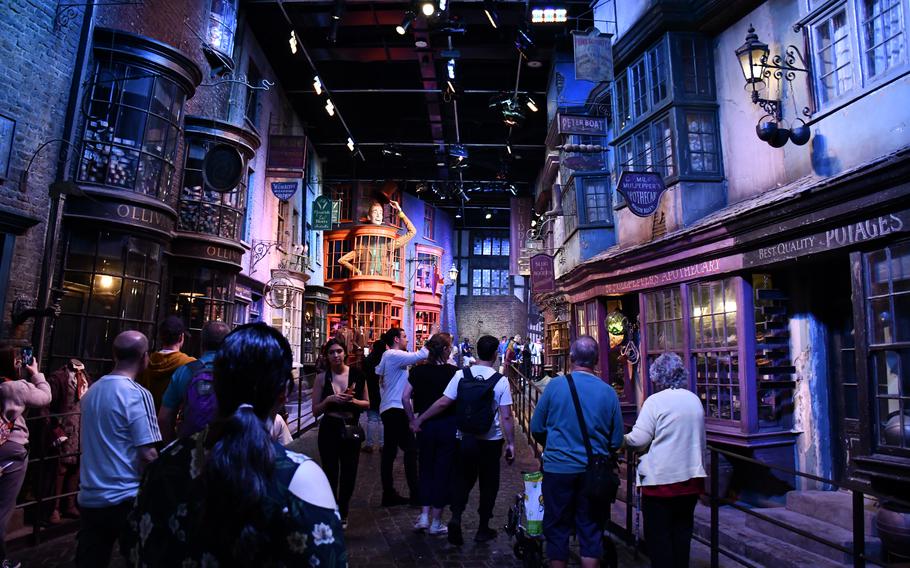 Visitors at the Warner Bros. studio tour for the Harry Potter movies walk through the set of Diagon Alley. (Kyle Alvarez/Stars and Stripes)

We then spent at least 40 minutes going through the extensive gift shop, wanting to buy absolutely everything, but settling on Gryffindor and Ravenclaw mugs, a chocolate frog and Bertie Bott’s Every Flavour Beans for my daughter, which she regretted asking for when she ate a rotten-egg-flavored jellybean.

Touring the Harry Potter Studios at WB London was truly like revisiting my childhood. As soon as we received our orders to the U.K., I knew that I had to take the opportunity to visit and I’m glad I did.

Sharing these moments with my daughter was special, and I look forward to handing her the same books I read and see how she experiences the world of Harry Potter for herself. 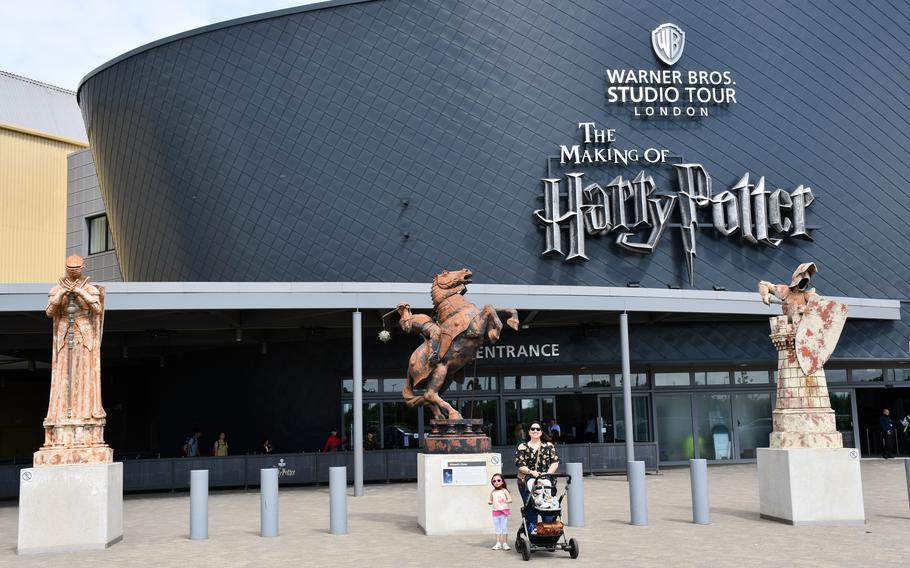 My wife, daughter and son stand outside the entrance to the Warner Bros. studio tour The Making of Harry Potter. (Kyle Alvarez/Stars and Stripes)