Nature and history on display at Homburg caves 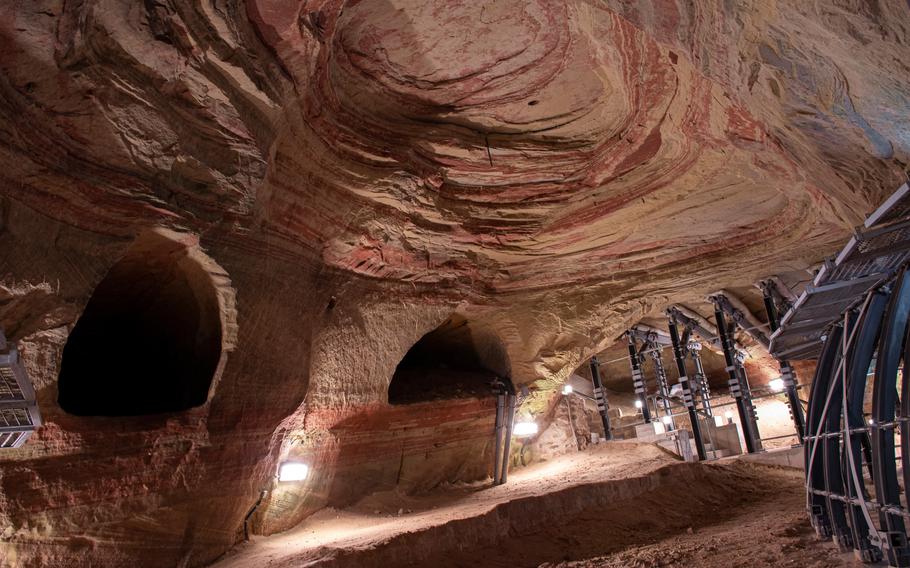 Red-and-yellow sandstone can be seen in the first domed area visitors come across upon entering the Schlossberg Caves in Homburg, Germany, photographed here on May 14, 2022. (Phillip Walter Wellman/Stars and Stripes)

In a hill towering above Homburg in the German state of Saarland, a labyrinth of tunnels once lost for centuries is now an excellent excursion for anyone interested in geology, history or simply a cool place to escape the summer heat.

The Schlossberg Caves are the largest sandstone structure of their kind in Europe, spanning 12 levels within the hill, on top of which lie the Hohenburg Castle ruins.

The public is allowed to explore the top three levels of the caves, which are technically a mine since they’re man-made. The entrance is on the 10th level, where visitors are given hard hats before making their way inside.

Most areas of interest in the complex are located on the 10th level, which alone makes a visit worthwhile. The 12th level may feel slightly claustrophobic for some, as it has a maximum height of 5 feet, 4 inches.

From the start, the site feels otherworldly. With its red-and-yellow walls, the red sand on the ground and the stillness in the air, it’s easy to imagine you’re in a cave on Mars.

But the surrounding stone is certainly of the Earth and has been for a very long time. Scientists believe that the hill was part of a desert valley that existed during the early Triassic period, about 250 million years ago. 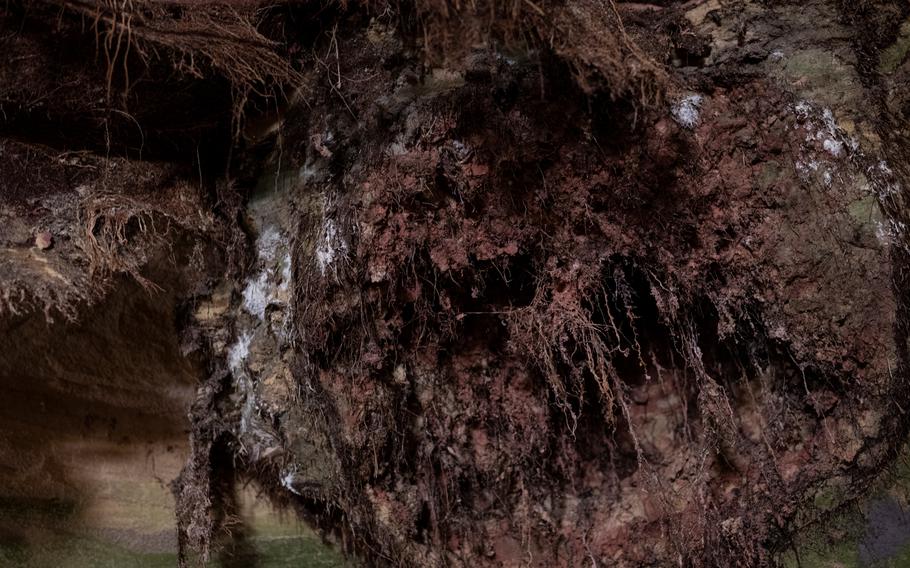 Roots from a linden tree have burrowed through the soft sandstone found in the area around Homberg, Germany, and are visible in the Schlossberg Caves. (Phillip Walter Wellman/Stars and Stripes) 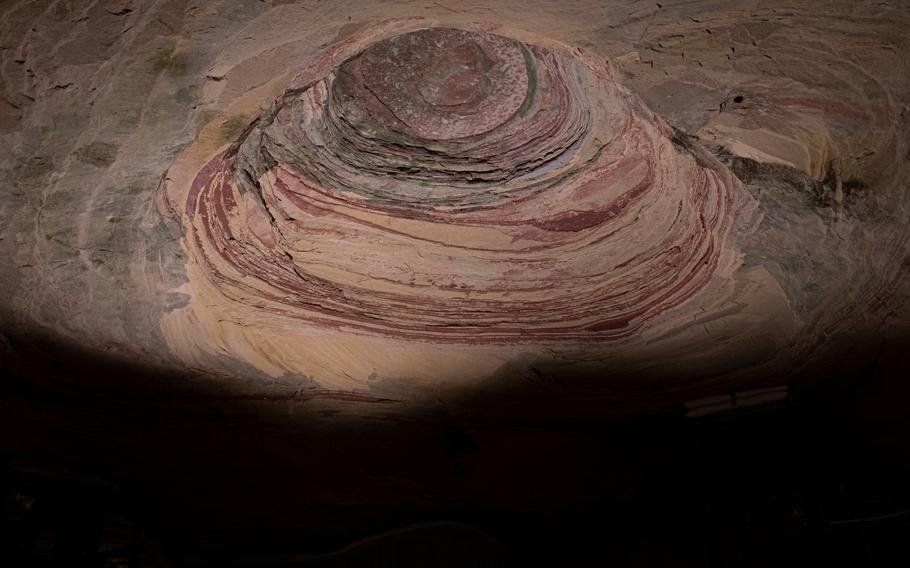 The roof of the “Throne Room” in the Schlossberg Caves in Homburg, Germany. The domed hall is about 150 feet below the Schlossberg Hotel. Its name dates to the 1960s, when cave festivals were regularly held. A “cave queen” was elected, and she sat in this room. (Phillip Walter Wellman/Stars and Stripes)

That would mean the sandstone predates large dinosaurs. However, other animals existed at the time, and if you look closely, you can see their footprints embedded in the cave walls.

The footprints are one of about a dozen areas of interest marked along a circular path that takes visitors through a series of tunnels and domed halls. 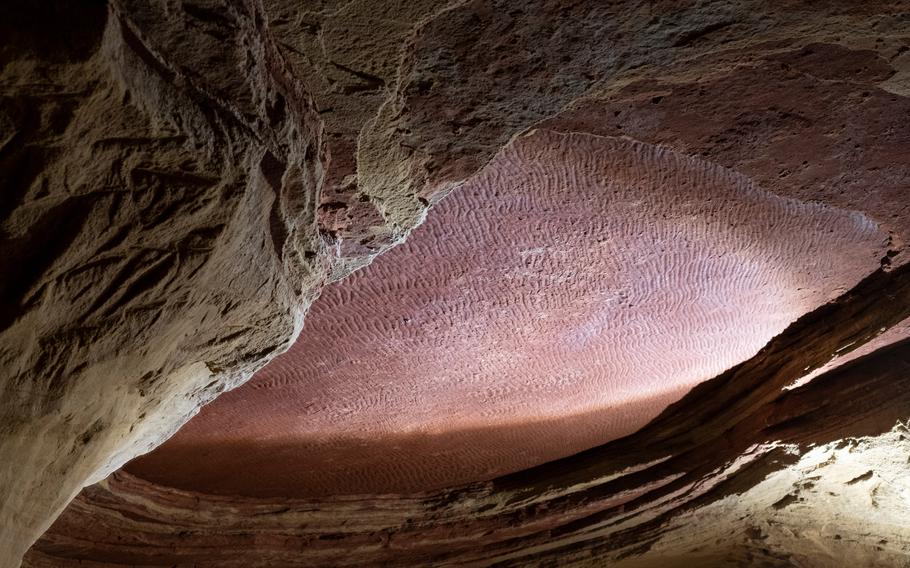 Fossils in the Schlossberg Caves are evidence, scientists say, that the sediment was partially formed in the Triassic period, around 250 million years ago. The red color is due to its iron content. The otherwise yellowish sandstone consists of around 95% quartz. (Phillip Walter Wellman/Stars and Stripes)

Historians agree these passages were likely created as escape routes for residents of the castle atop the hill and later were used for extraction of minerals used in the production of glass and iron in the 1600s. The mining ceased sometime in the 1700s and shortly afterward the caves were forgotten.

It wasn’t until the 1930s that children playing in the area rediscovered them.

A few years later, World War II began, and Homburg endured repeated air raids, forcing thousands to seek shelter in the caves. Areas where families stayed during the raids are clearly marked along the pedestrian path.

Altogether, touring the levels accessible to the public usually takes around 40 to 50 minutes.

The first level of tunnels is all the way down at the base of the hill. While you can’t explore it by foot, a shaft allows you to look nearly 100 feet down to the former cellars of the Karlsberg brewery.

A second shaft leads nearly 1,000 feet up into the basement of the Schlossberg Hotel.

The temperature inside the caves is a constant 50 degrees Fahrenheit, so visitors are advised to dress in layers.

In addition to the wonders of the caves, the site also hosts the Hohenburg Castle ruins, which offer a nice view of Homburg.

And a meal at one of the restaurants in the city can cap off the experience nicely, allowing visitors to go from prehistoric times to contemporary modernity all in the space of just a couple of hours. 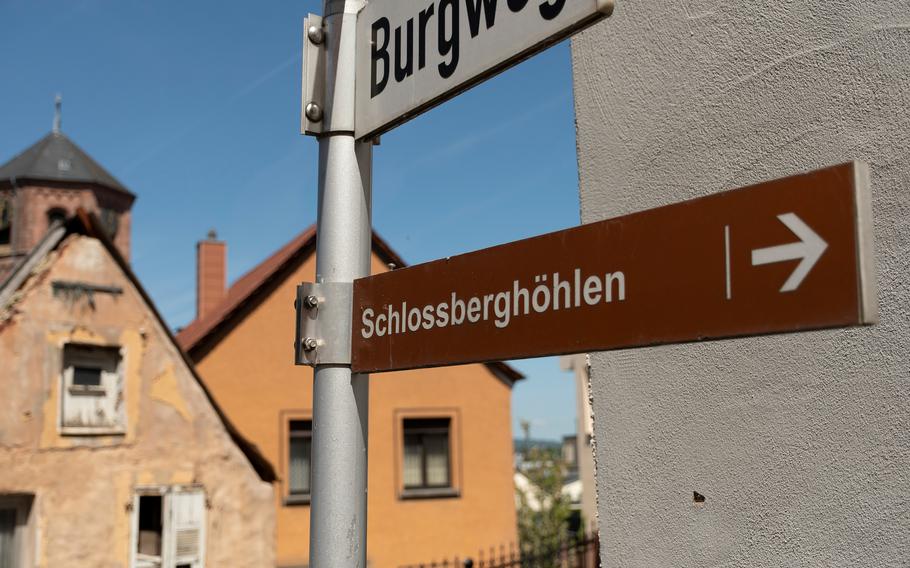 A sign in Homburg, Germany, points toward the Schlossberg Caves. (Phillip Walter Wellman/Stars and Stripes) 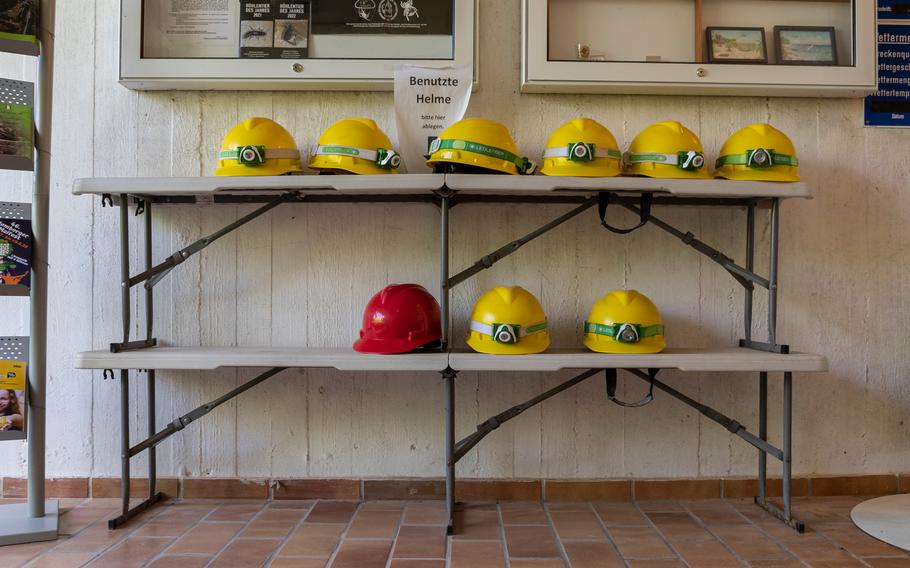 Hardhats are stored at the entrance of the Schlossberg Caves. They must be worn by visitors to the site as a safety precaution. Portions of the cave have been dated to the Triassic period. (Phillip Walter Wellman/Stars and Stripes)

Directions: The Schlossberg Caves are about 30 minutes from Kaiserslautern and 15 minutes from Landstuhl by car or rail. If you’re driving from either location, take A6 and exit at B423. Park at the top of the hill next to the castle ruins and follow the pathway behind the Schlossberg Hotel to the cave entrance. By train, it’s less than a mile. Follow the signs that say “Schlossberghohlen.”

Food: Ice cream and drinks are available at the entrance.