St. Goar and its castle exude enchantment of the Rhine 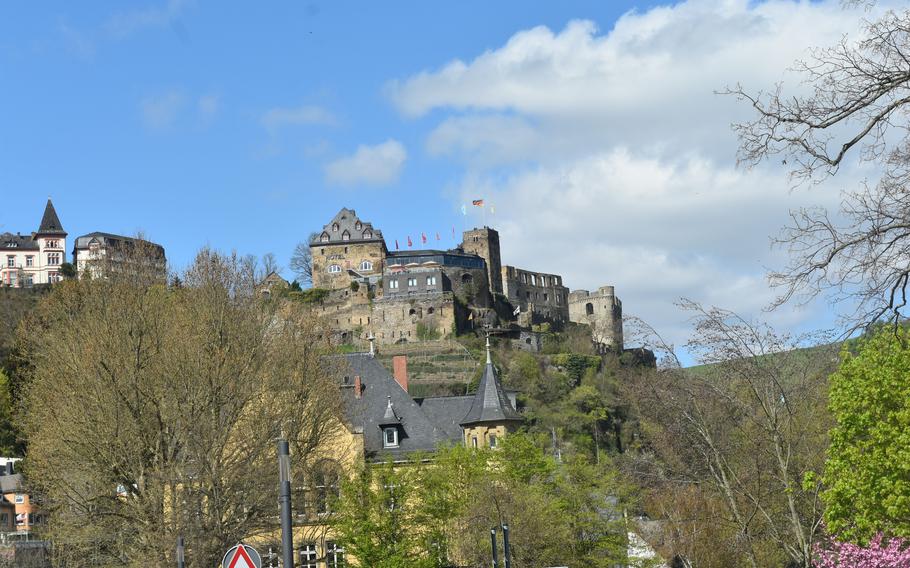 The Burg Rheinfels as seen from the town of St. Goar, Germany, April 16, 2022. Burg Rheinfels was built in 1245 to protect the town and its citizens from outside aggressors. (David Edge/ Stars and Stripes)

Visitors to the Rhine River valley rave about the stunning views of castles and the charming little towns surrounding them.

Although the high-profile Rhine castles, such as Schloss Drachenburg and the fortress at Koblenz, grab the lion’s share of tourists’ attention, Burg Rheinfels deserves a good look. Towering high above the town of St. Goar, the castle makes for a pleasant stop in numerous ways.

Built in 1245 to protect St. Goar and its toll rights, the castle expanded over the subsequent 500 years. It became one of the most important castles on the middle Rhine. Today, Burg Rheinfels is the scene of a four-star hotel. Visitors have access to the clock tower, the turret staircase, the inner courtyard, the brewery, the wash house and the high battery, which was a crucial part of the defense of the castle. 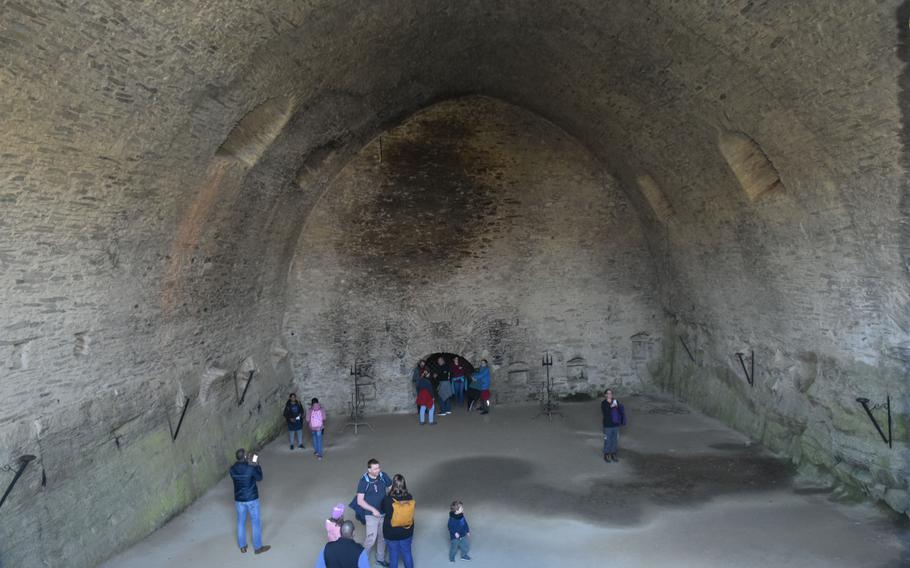 Visitors admire the vaulted ceiling of the cellar at Rheinfels Castle in St. Goar, Germany, April 16, 2022. With an area of more than 3,000 square feet, the room is considered Europe’s largest self-supporting vaulted cellar and once housed a wine barrel with a capacity of over 45,000 gallons. (David Edge/Stars and Stripes) 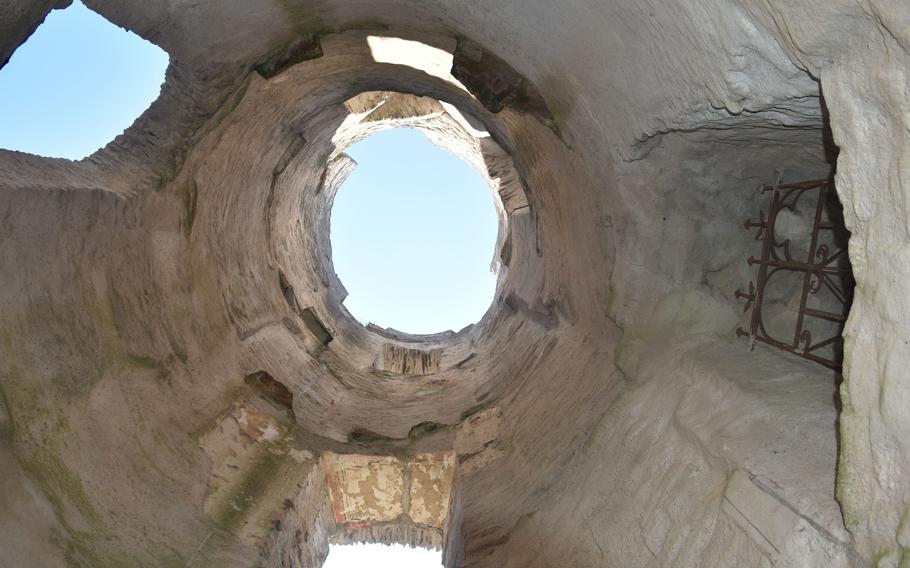 The inside of the turret staircase of Burg Rheinfels in St. Goar, Germany, April 16, 2022. (David Edge/Stars and Stripes) The high battery of Burg Rheinfels is still standing April 16, 2022. It was a vital part of the defense of the castle. (David Edge/ Stars and Stripes)

Guided tours in English allow visitors to see more of the castle, including the dungeon. On the topic of medieval places of punishment, the hotel at Burg Rheinfels advertises an opportunity for workout warriors to tone their muscles using seriously old-school equipment in what it calls the “torture chamber” fitness room.

For the less physically demanding, the castle-turned-hotel boasts meal opportunities with some of the most spectacular views imaginable. The upscale Auf Scharffeneck restaurant is part of the castle premises, which also afford visitors the opportunity to indulge in a range of massages and beauty treatments.

The architecture of the historic buildings combined with the mountains that surround the town make it easy to see why the region is a UNESCO world heritage site. The rustic Der Landgraf tavern even has an adjoining area called the World Heritage Terrace.

History abounds at Burg Rheinfels, which the website bills as one of the largest fortifications in Europe. Its size made it an obvious target during a long string of wars, including the Thirty Years War and the Palatinate War of Succession in the 1690s.

During the latter, the castle endured a siege by 28,000 French troops. The prince who went on to become Kaiser Wilhelm I bought the medieval part of the ruins in 1843, but his plans to rebuild a portion of it as a garden palace did not come to fruition.

St. Goar also has a plethora of other things to see and do. The town sits on one of the many bends of the Rhine, and a river cruise between Ruedesheim and St. Goar offers a stellar way to enjoy it as well as the marvelous scenery all along the route.

Though St. Goar’s downtown is tiny, it is dotted with beautiful little shops and restaurants. The town also has a small park right on the Rhine. Amenities include walking and running paths and a nice beer garden.

The site in town that I enjoyed the most was a beautiful old church, Pfarrkirche St. Goar and St. Elisabeth. Unfortunately, it was closed to visitors while I was there, but the exterior was very impressive.

The legendary Lorelei cliff is also not far away, making St. Goar and Burg Rheinfels a seamless fit into an itinerary of the more must-see attractions on the Rhine. 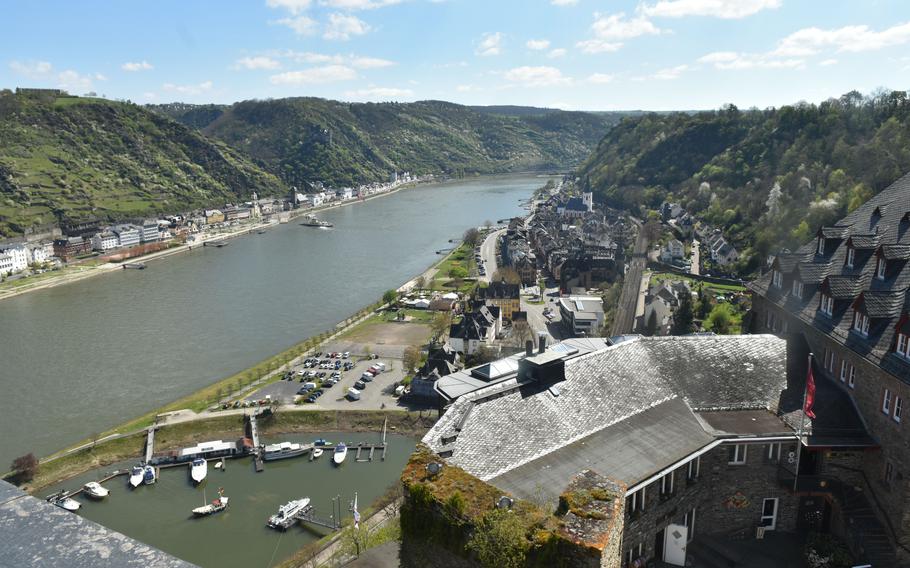 The town of St. Goar, Germany, seen from the battlements of Burg Rheinfels on April 16, 2022. (David Edge/ Stars and Stripes) A printing press on display in the Burg Rheinfels museum on April 16, 2022. The castle was a hub of culture and science from the 13th through 16th century. (David Edge/Stars and Stripes)