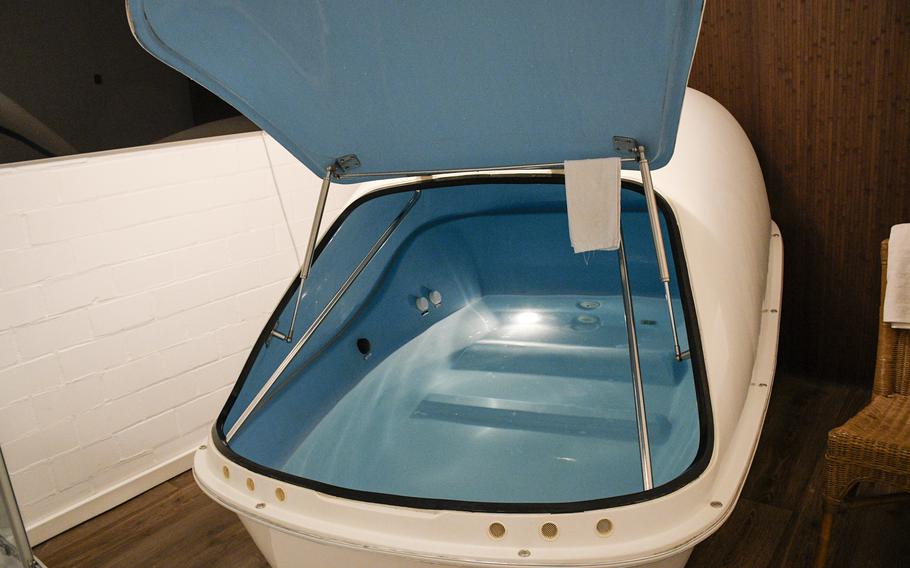 Just Float is probably Kaiserslautern’s most modern way to unwind: a relaxation technique that shields you as much as possible from the rest of your life.

Once associated with science experiments and new age wellness techniques, float tanks have become much more mainstream over the decades. Star athletes like Tom Brady and Steph Curry vouch for them as well. Even “The Simpsons” did an episode on the phenomenon.

During the float tank experience, you spend 45 minutes or more in total darkness, soaking in shallow saltwater inside a soundproof pod. Just you and your thoughts, no computer screens or phone notifications.

The reception area at Just Float is warm and lit by the glow of Himalayan salt lamps. Some float centers give a short briefing before you enter the tank to give you a sense of what to expect. Just Float didn’t, however, save for a quick line about not drinking caffeine beforehand.

The actual float tanks look like white plastic eggs. After closing the door of the room and showering, I clambered into one.

The water inside is warmed to body temperature and the salt provides buoyancy. There’s a small light in the pod and a bit of calming music at the very beginning.

But then the light and the sounds stop, and there’s just darkness and silence and your thoughts. 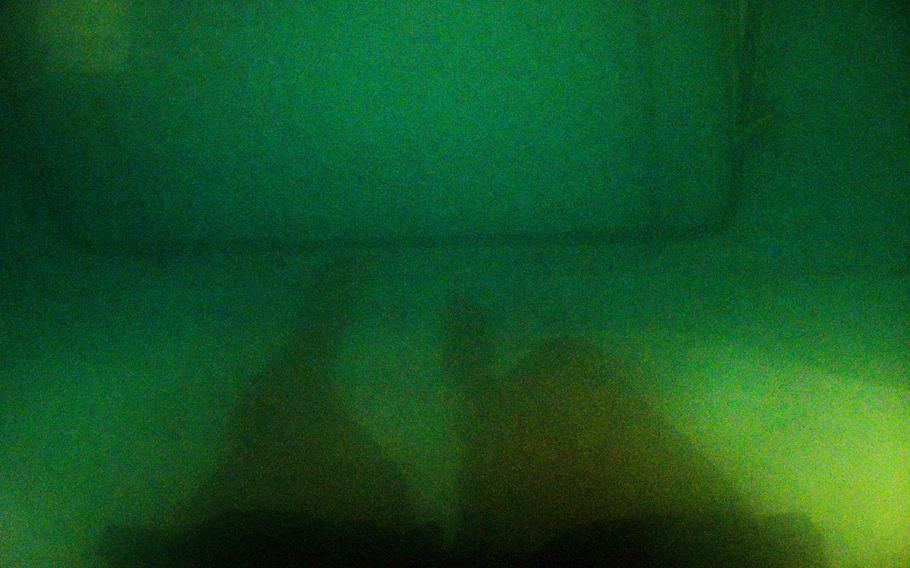 A person floating inside the pods at Just Float in Kaiserslautern, Germany, will be in darkness and silence, alone with their thoughts. (J.P. Lawrence/Stars and Stripes)

Usually, attempts at relaxation bring me only stress. I’ve tried to meditate, but then I start thinking about things I need to do. Or I get frustrated about how I’m not relaxing as much as I should.

Float sessions have been like a cheat code to clear my thoughts. During one of them at a float center in the United States, it was as if an hour had passed in a blink. Apparently floating generates the same kind of brain waves that sleep produces.

In my sessions at Just Float, I didn’t get to a meditative state. Floating takes practice, the company’s website says. The body sometimes takes a few cycles before it can let its guard down.

Still, being alone with my thoughts was a treat of its own. I had memories that were more vivid than usual. My mind was able to hop along between various thoughts without being pulled away by distractions.

The salt, when it wasn’t getting in my eyes, kept me floating. Without my ability to sense gravity, I felt at times as if I were in outer space.

But other times, I wished that the tanks were bigger. Each bump into the side of the tank jolted me away from my thoughts, reminding me that I was in a plastic egg-shaped pod, paying to hide from modernity.

And the center in Kaiserslautern, while comparable in quality to the float tank I tried in America, feels a bit pricey, especially if you consider that you may need a few sessions to get the full benefit from it.

When the light clicked on, I got out, and I was more calm and rested than when I started. I washed a surprising amount of salt off in the shower.

And then I checked my phone. 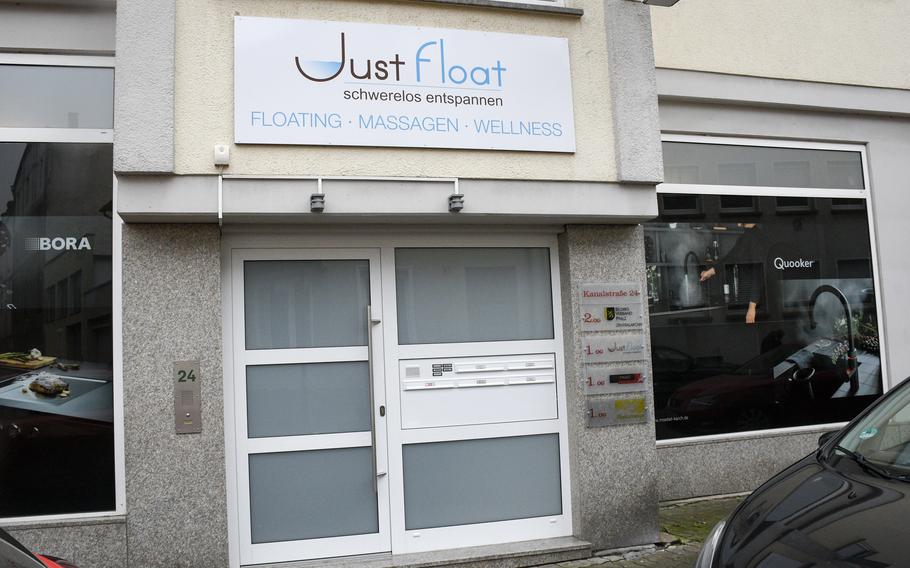 Just Float is a couple of miles from the Army’s Kleber Kaserne installation in Kaiserslautern, Germany. (J.P. Lawrence/Stars and Stripes) 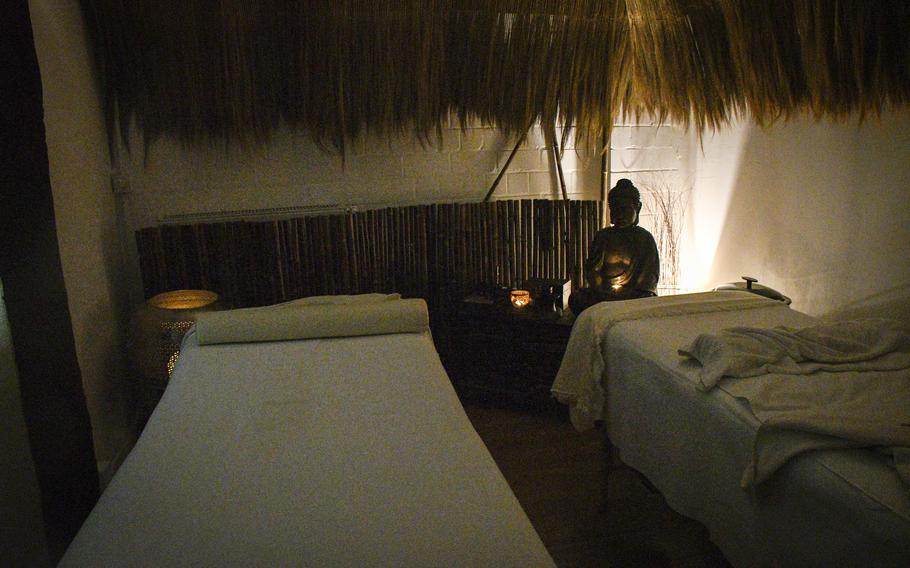 Just Float in Kaiserslautern, Germany, offers massages in addition to sessions in its float tanks. (J.P. Lawrence/Stars and Stripes)

Address: Kanalstrasse 24, Kaiserslautern, Germany. Up one flight of stairs. Street parking available, as is the nearby Stiftsplatz parking garage. Accessible by bus at the Stiftsplatz and Synagogenplatz stops.

Hours: Appointment times are scheduled over the phone. Closed Monday.

Cost: A 45-minute float is 35 euros on Tuesdays between 10 a.m. and 4 p.m. Otherwise, floats range between 49 to 75 euros, depending on the length. The shop offers a variety of massages. Combo packages of floats and massages available, as are deals for couples.