The main path through the "naturalistic oasis" bordering the eastern side of Lago Santa Croce in Italy is easy to follow and is home to bicyclists and strollers as well as walkers. On a recent two-hour visit on a weekday, fewer than two dozen people strolled or biked along the pathway. (Kent Harris/Stars and Stripes)

With the coronavirus pandemic extending its tour of Italy, it’s become a challenge of sorts to go where others aren’t for brief forays away from home and work.

My four-member family has spent a lot of time at home, and though we have a large yard, the kids really like to get outside and stretch their legs — and vocal cords. They’re generally not big fans of walking, though. It’s better if they have something new to see along the walk.

Fortunately, there are plenty of scenic locations within a short drive of home.

One of them is Lago Santa Croce, a largely man-made lake just north of Vittorio Veneto, about 35 miles from Aviano Air Base and a bit farther for those based in Vicenza. 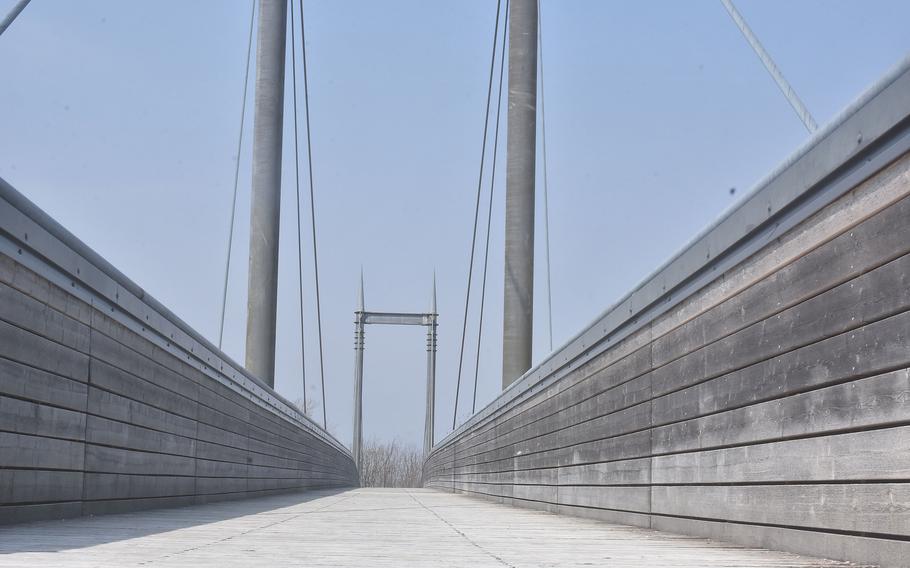 This suspension bridge made of wood and metal separates the beach/campground at Lago Santa Croce in Italy from a "naturalistic oasis." When it's windy, parts of the bridge hum loudly, sounding something akin to a chainsaw or motorbike. (Kent Harris/Stars and Stripes)

It is far less crowded in the summer than the various beaches along the Adriatic Sea coast just a short drive away. The area is naturally windy, so the lake can get busy at times when sailboats converge for events.

Right now, though, it’s essentially deserted, especially on a weekday. And a few steps away is a place whose literal translation from Italian is “naturalistic oasis.” Bring along some water, and maybe a picnic, while walking along the "naturalistic oasis" along the shores of Lago Santa Croce in Italy, because the water definitely doesn't look potable. The area next to the man-made lake is a natural marsh and home to a handful of bird species. (Kent Harris/Stars and Stripes) Spring hasn't quite sprung at the "naturalistic oasis" along the shores of the Lago Santa Croce in Italy. So various hues of brown dominate the landscape. But there are signs that the season is changing. (Kent Harris/Stars and Stripes)

It’s a stretch of marshland along the eastern side of the lake north of the main beach and campground. A wide, flat path bisects it, making for an easy walk. Bikes and strollers have no issues navigating it.

In spots, there’s only you and the chirping of birds native to the area. And on our recent visit, the sound of the wind.

It still had a bit of chill coming off the snow-capped mountains surrounding the valley, which is where the lake was dammed.

If you’re looking for peace and quiet, anytime but the summer months, especially on weekends or during festivals, is a good time to visit.

Parking at a pair of lots near the beach is currently free, but you’ll pay by the hour in the summer. On the food front, the beach area has a restaurant and a few snack bars in the summertime. Otherwise, stop along the way for picnic supplies or head to a restaurant.

The path through the marsh is only a small part of a greater walk from the lake that winds through several small settlements. Signs point to longer bike treks connecting the lake to Treviso and Belluno.

Maybe we’ll take on one of those when the kids are a bit older. For now, though, a walk near a quiet lake does the trick. 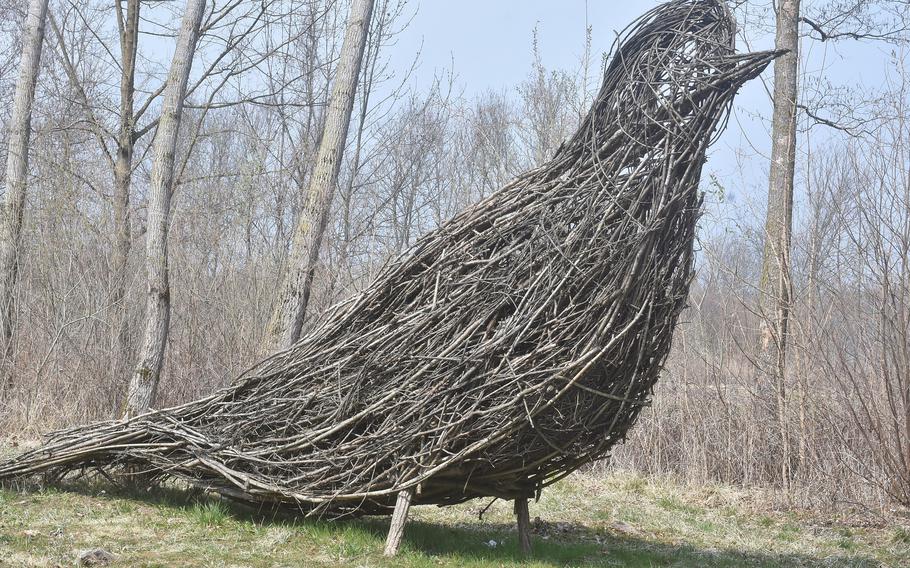 It's easy to hear the cries of birds while walking along the "naturalistic oasis" along the shores of Lago Santa Croce in Italy. But it's much harder to see one, with this large sculpture made of branches the notable exception. (Kent Harris/Stars and Stripes) This eyeball made from the plentiful supply of branches and sticks, in the "naturalistic oasis" along the shores of Lago Santa Croce in Italy, is one of a handful of local art projects exhibited along the walk. (Kent Harris/Stars and Stripes)

Directions: There are two main ways to get there. The quicker way is a 25-minute drive along the A-28 and A-27 freeways with a toll of about 4 euros each way. It takes about twice as long to travel along the SS-13 through Sacile and then the SP-71 (take the second right at the traffic circle after the Bennet mall) and then the SP-51 through Vittorio Veneto and to the lake. The longer drive is scenic and features at least a dozen grocery stores and some restaurants. From Vicenza, take the A-4 to the A-27 and head toward Belluno. Head for the eastern part of the lake where the only real beach is. There aren’t pathways along the western shore, just a road. There’s only one entrance for the beach and it’s marked by an arrow with a blue parking sign.

Hours: Open around the clock, but best not to go in the dark.

Cost: Free. Parking meters are activated in the summer.