Anglo-Saxon history, archery lessons and ‘Lord of the Rings’ in one place 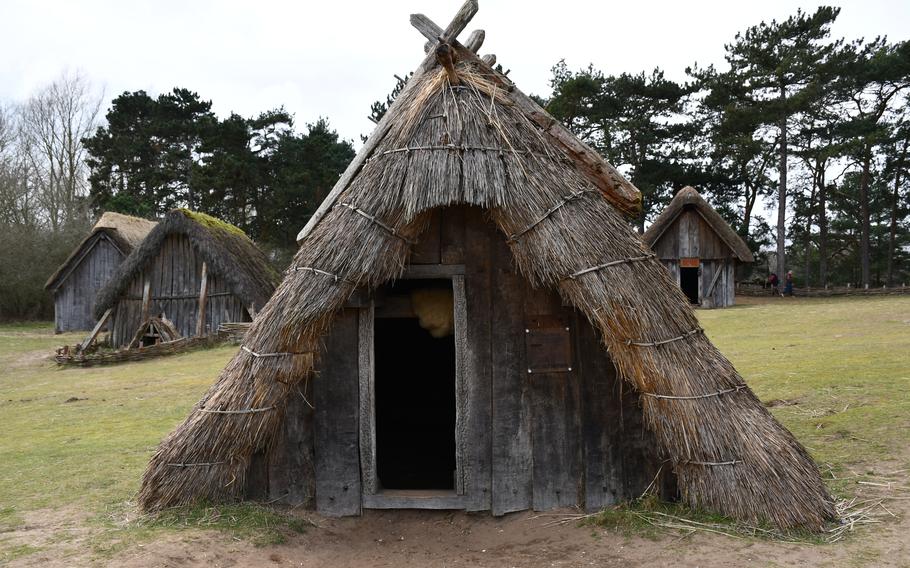 A re-creation of an ancient village where it once stood is one of the attractions at the West Stow Anglo-Saxon Village and Country Park in England. (Kyle Alvarez/Stars and Stripes)

On the grounds of a sprawling Suffolk park, an unusual blend of book, bow and and the feeling of time travel awaits visitors.

The Anglo-Saxon village in West Stow Country Park provides a hands-on experience of what life was like for those who lived in the area surrounding the bases of RAF Lakenheath, Mildenhall and Feltwell during the period from 420 to 650. That’s more than 400 years before the Norman conquest.

Carvings near the entrance depict an assortment of images, including one of Beowulf, the hero of the most well-known piece of Old English literature.

Speaking of literature, the park also houses a museum that hosts events based on J.R.R. Tolkien’s beloved “Lord of the Rings” trilogy. There is even a model of a hobbit’s home outside the back entrance of the museum. 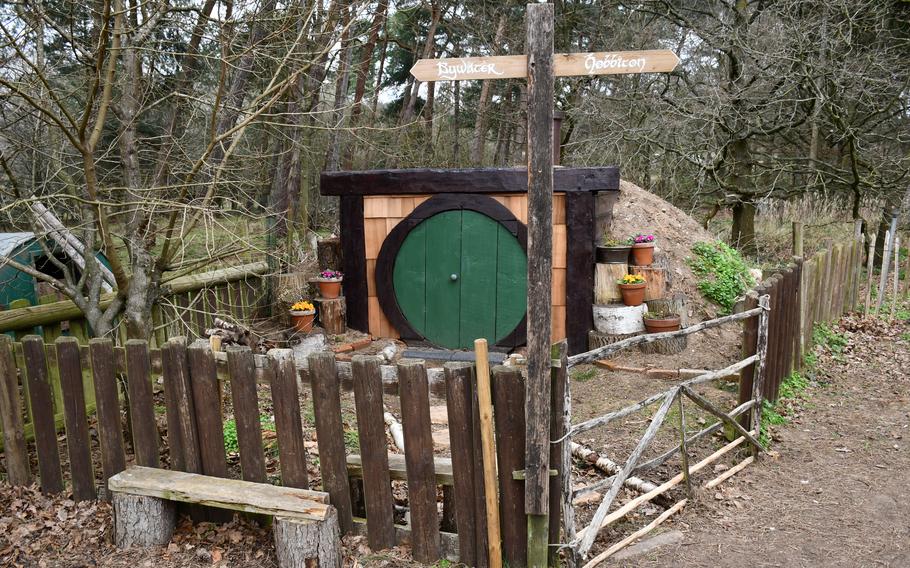 A hobbit house in honor of J.R.R. Tolkien at the West Stow Anglo-Saxon Village and Country Park in England. Many "Lord of the Rings" events are held on the premises throughout the year. (Kyle Alvarez/Stars and Stripes)

According to museum employee Glynis Baxter, the “Lord of the Rings” events pay homage to the fact that Tolkien was a professor of Anglo-Saxon history. That history provided a lot of inspiration for his books as noted by author Dr. Deborah A. Higgens in her book Anglo-Saxon Community in J.R.R. Tolkien’s the Lord of the Rings. Where she discusses how Tolkien created his grand story by examining Anglo-Saxon literary works “On Fairy-Stories” and “Beowulf”.

My family’s village visit started in a small gallery that displays items found at the site during archaeological excavations, which began in the 1950s. We then headed outside and watched a short video about the history of the Anglo-Saxons and the archaeological site.

Then we ambled around the village, which felt like stepping back in time. The houses are reconstructions of the ones that archaeologists believe were used by the early inhabitants and were built over the remains found during excavations.

After the village walkthrough, we went to the museum, which offered the more traditional experience. Each display had a word or two in Anglo-Saxon and the English translation underneath it. We had a good time trying to pronounce the Anglo-Saxon words. 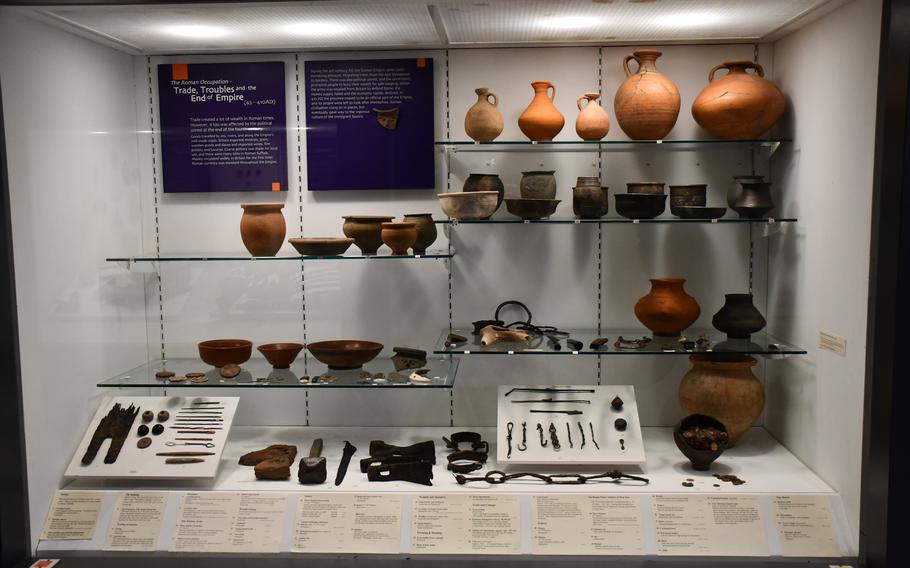 Anglo-Saxon tools, weapons and other artifacts are on display inside the West Stow Anglo-Saxon Village and Country Park, Feb. 28, 2022. (Kyle Alvarez/Stars and Stripes) 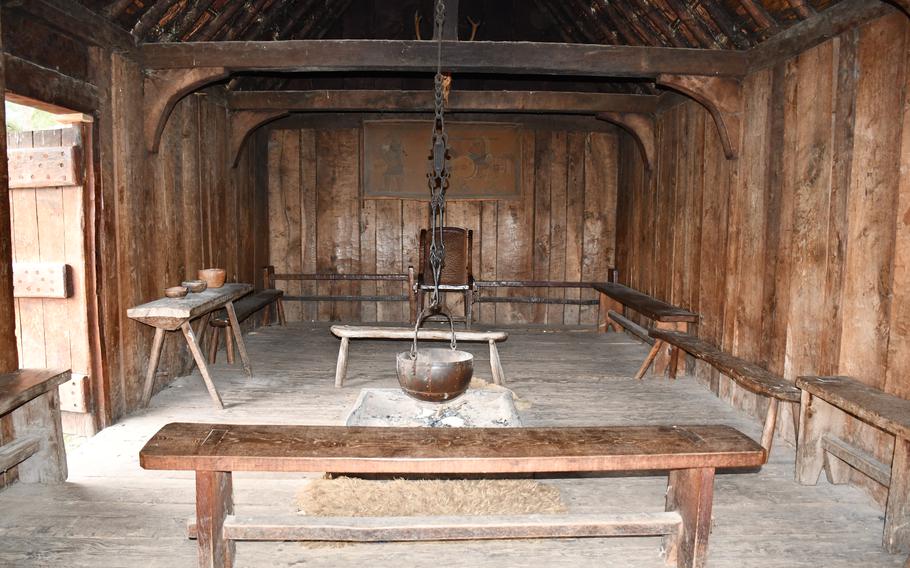 A re-creation of an ancient dwelling at the West Stow Anglo-Saxon Village and Country Park in England. The village is comprised of many houses, including living quarters, a workshop and a town hall. (Kyle Alvarez/Stars and Stripes)

The museum also hosts a range of interactive events, including instruction in an old essential skill: archery.

My interest in learning to use the longbow was piqued. Unfortunately, we couldn’t fit the archery lessons into this visit, so I’m definitely coming back for that. It should be fun persuading the wife to let me fire arrows and role-play as Legolas.

Event dates and times can be found on their website for the museums, events and park trails. The online schedule shows that most events are held on weekends.

For further enjoyment, we wanted to check out the trails, but it began to rain. The country park section of the complex is free, and dogs are allowed.

According to the park’s website, the park is 125 acres, with trails that pass by lakes and bird blinds.

We finished our visit with a snack at the West Stow Cafe, outside the main entrance, which made for a pleasant end to the day and gave us a chance to talk about what we saw.

I couldn’t help but be amazed at the human ingenuity on display. These ancient inhabitants built everything by hand, and the combo of the village and the museum makes for a seamless living history presentation.

Add to that the myriad leisure activities afforded by the park and you have a fine opportunity for an eclectic outing.

Admission: Adults, 6 pounds; children 5-16, 3 pounds; discounted admission (for the disabled, people over 60, job seekers, low-income people and students), 4 pounds; families (of up to five, with a maximum of two adults), 16 pounds. Admission does include museum and village access.