A dim, steely day seems appropriate on a trip to the town of Frankenstein 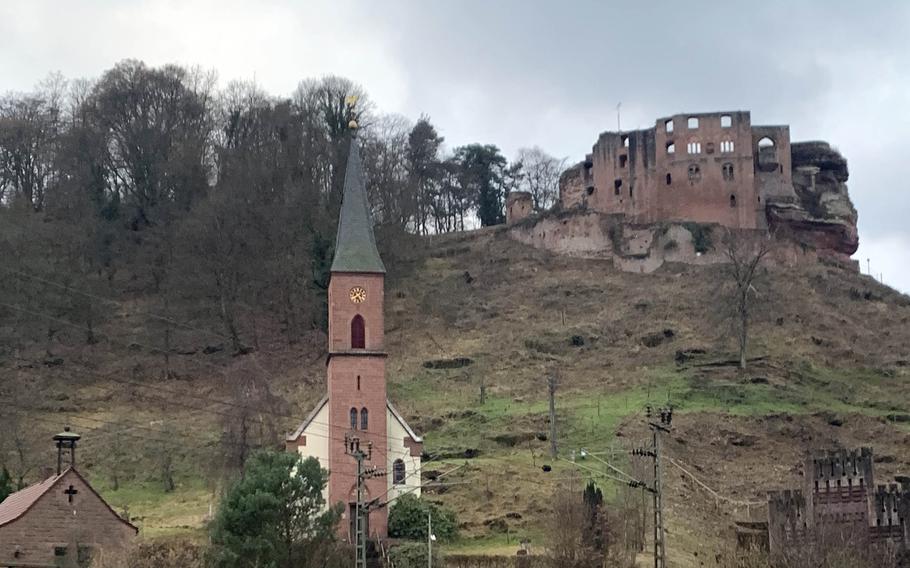 The Protestant church and the ruins of Frankenstein Castle tower over the German town of the same name, Jan. 23, 2022. (Chad Garland/Stars and Stripes)

The late German author W.G. Sebald is hardly a household name in America, and he was not among the literary greats I expected to be on my mind during a recent visit to the town of Frankenstein.

The village of less than 1,000 residents winds through the Hochspeyerbach Valley, a vein of civilization running through one of the largest contiguous forests in Europe, the Pfaelzerwald-Nordvogesen biosphere.

It’s a dozen miles east of Kaiserslautern, about 10 minutes by train from the main station to a platform just below the hilltop ruins of a 12th-century castle named for a family that died out two centuries later.

It’s not to be confused with Burg Frankenstein in Muehltal, south of Darmstadt, which may have loose ties to Mary Shelley’s 1818 novel about a scientist who cobbles a creature together from corpses.

Maybe what drew my thoughts here to Sebald rather than to Shelley is that his novels — a blend of memoir, travelogue, history and fiction — often feature wandering narrators reflecting on decay, time and memory.

His style has been described as ghostlike. That posthumous perspective was perhaps appropriate for a quiet winter hike under a steel-gray sky to the forest and the castle ruins before the last daylight faded away.

On the town’s website, Mayor Ekhard Vogel bills Frankenstein as an ideal starting point for hiking and biking tours of the forest, which features over a dozen nearby rock formations as well as other historical sites.

A second set of castle ruins in Diemerstein is about a 25-minute walk to the northwest of the train platform.

Just past the train platform and the Catholic church, signs lead to a steep path with switchbacks up to Burg Frankenstein. A more gradual route passes between the Protestant church and the town graveyard a bit farther east. 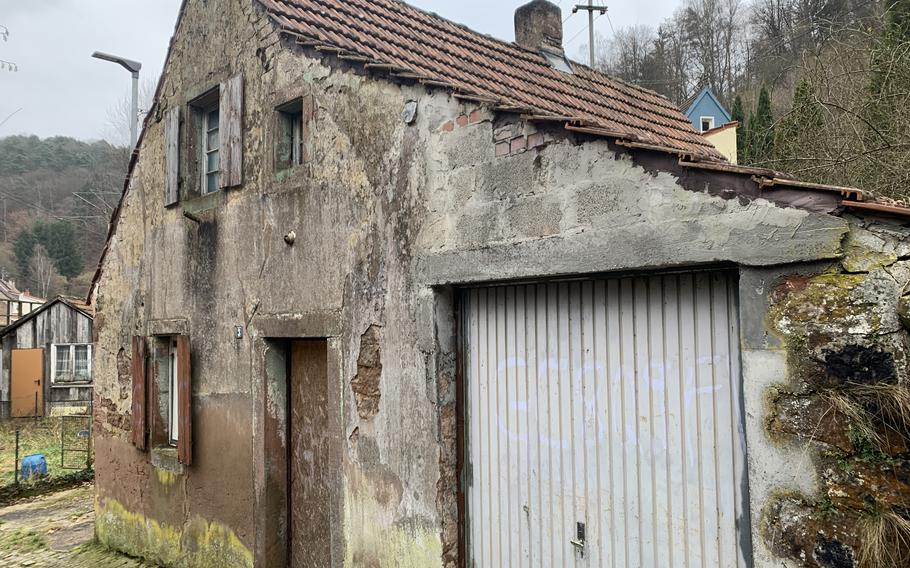 A path that leads to the ruins of the 11th century Frankenstein Castle passes this decrepit building at the foot of the hill before going between the town's Protestant church and a graveyard, Sunday, Jan. 23, 2022. (Chad Garland/Stars and Stripes) 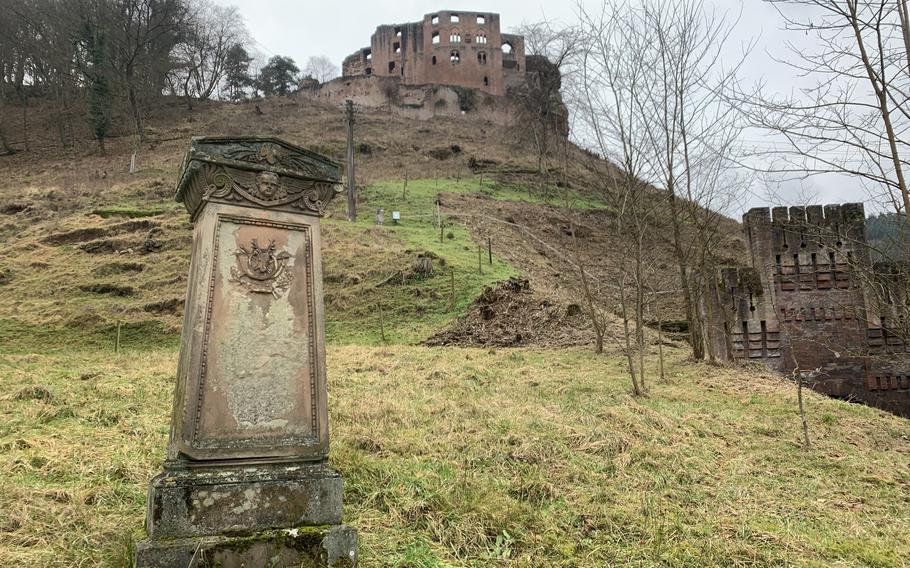 A weathered memorial stands near a Protestant church below Frankenstein Castle, about 12 miles east of Kaiserslautern on Sunday, Jan. 23, 2022. (Chad Garland/Stars and Stripes) 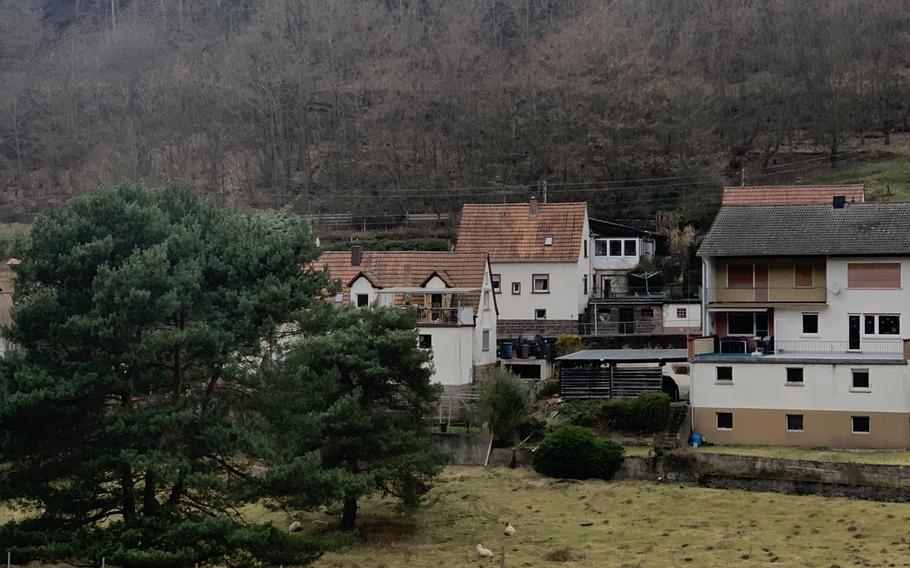 Sheep graze in a pasture along the Erlenbach River on the eastern side of Frankenstein, Sunday, Jan. 23, 2022. The sleepy town is home to the ruins of an 11th century castle and just outside its eastern edge is an alternative to a traditional cemetery, where families can bury the ashes of a loved one in a biodegradable urn near a tree or other natural feature. (Chad Garland/Stars and Stripes) 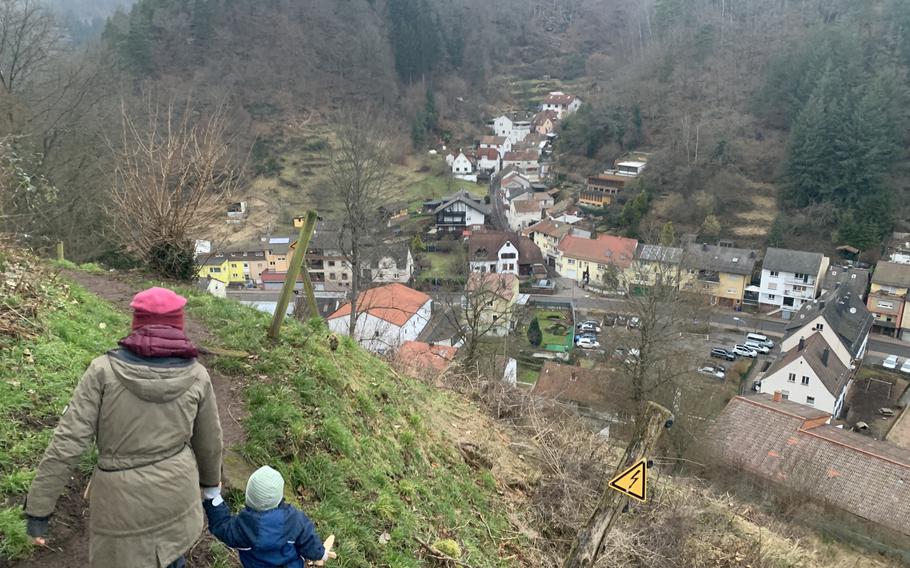 A child wielding a wooden sword prepares to venture down a path from the Frankenstein Castle ruins into the town below, Sunday, Jan. 23, 2022. (Chad Garland/Stars and Stripes)

Visitors can explore several levels of the castle, including a kind of balcony atop the rock formation jutting out over the valley below and offering scenic views of the forested hills surrounding it. 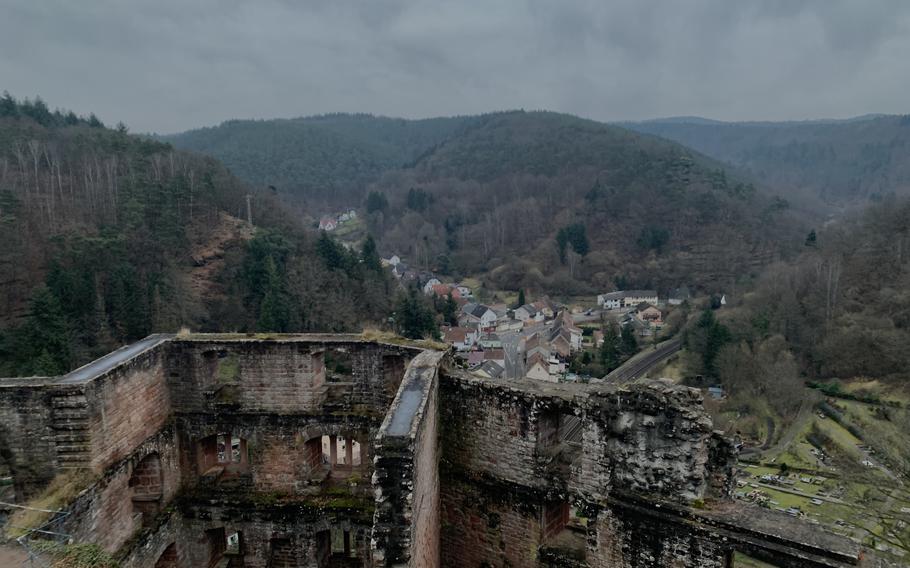 A view of the Frankenstein Castle ruins on a steely gray afternoon east of Kaiserslautern, Sunday, Jan. 23, 2022. (Chad Garland/Stars and Stripes) 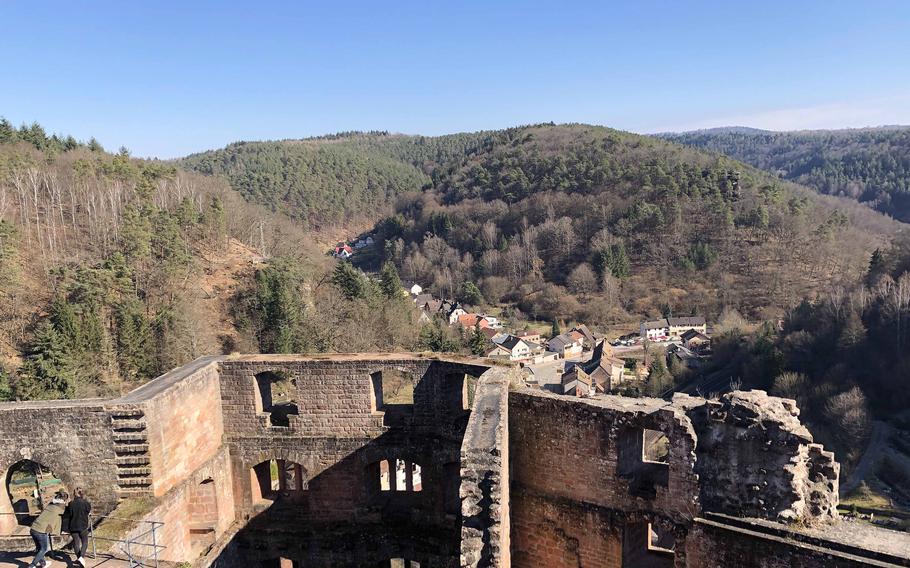 Frankenstein Castle ruins and its surroundings present a different picture on a sunny spring day in March 2021. (Erik Slavin/Stars and Stripes) 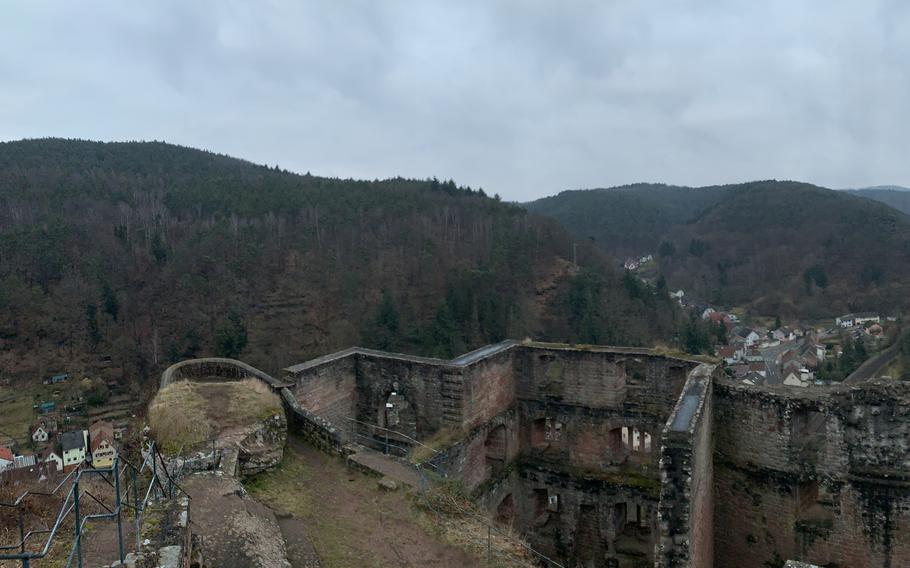 The Frankenstien Castle ruins offer views of the town in the valley below and the surrounding Palatinate Forest, one of the largest contiguous forests in Europe, just a few minutes east of Kaiserslautern, Sunday, Jan. 23, 2022. (Chad Garland/Stars and Stripes)

The earliest of the castle’s fortifications date to the 1100s, built on the site of a monastery, according to the Rhineland Regional Council’s cultural website, www.kuladig.de. That makes it among the oldest aristocratic residences in the Palatinate Forest.

It was besieged and damaged in the early 1500s before falling into ruins in the following decades. A castle administrator with designs on building an inn from its stones in the valley below ordered the demolition of the keep in 1585.

Much of the rest was uninhabitable long before the Thirty Years War in the early 1600s, when parts of it housed Spanish troops.

It’s been partly restored several times since the 1880s. In December, some 30 volunteers battled back the vines and overgrown hedges encroaching on the ruins, the town website says.

On the walk there and back to the ruins, I felt like a Sebald character, observing how the town seemed to be alternately resisting the surrounding forest and the ravages of time and yet succumbing to them as well.

More than a few buildings were painted fresh white or shades of lemon, lime or salmon, as if defying the earthy moss, lichen and mold that clung to surfaces elsewhere.

On the road along the Erlenbach River toward Bad Durkheim to the east, several homes boast manicured lawns and gardens. I saw sheep grazing in a pasture.

But there are also homes with cracked walls and buckling roofs, and some are even more dilapidated, as if being returned to nature.

Next month, volunteers plan to return to the castle to again beat back the overgrowth before the surrounding forest springs back to life.

At that time, or simply when the sun comes out and the winter chill isn’t as pronounced, the castle takes on a less foreboding character.

Some families picnic, while kids kick a soccer ball on the grass not far the castle ruins. Those scenes might not fit Sebald’s novels, or Shelley’s for that matter, but they do make for a pleasant day. 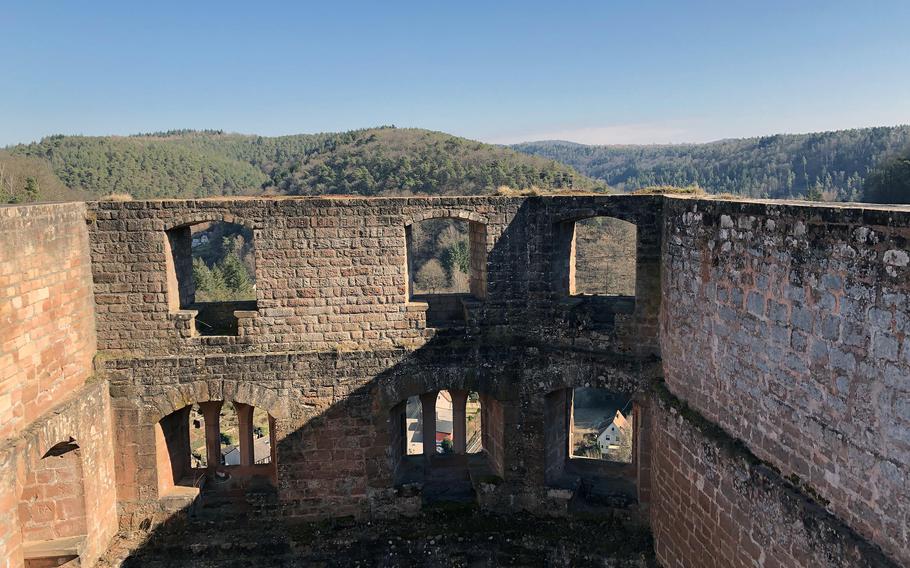 The sun shines on the walls of Frankenstein Castle ruins on a spring day in March 2021. (Erik Slavin/Stars and Stripes)

Directions: For Frankenstein Castle, leave A6 at the Hochspeyer exit and follow B48 to the intersection with B37. Turn left, and Frankenstein is the next town.

Hours: Open around the clock.