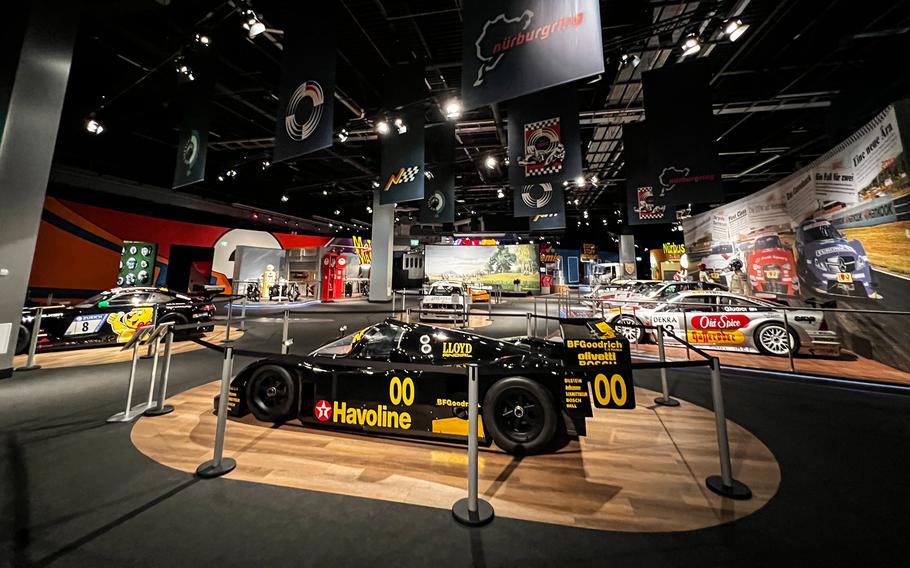 Many Americans arriving in Germany look forward to the thrill of accelerating on speed-limit-free stretches of the autobahn, the country’s iconic highway system.

What velocity villains may not know is that there is an even more storied place in the country to fill the need for speed.

Germany’s best address for an infusion of octane is a roadway that also happens to be among the world’s most legendary racetracks: the Nuerburgring and its notorious, wooded “north loop,” or Nordschleife.

British racing legend Jackie Stewart once called the course “the green hell,” as much of it is surrounded by the dark rows of pine forests.

Today affectionately shortened to “the Ring,” the track hasn’t lost its mystique for racers or fans, who can take their own vehicles to its blacktop on select weekends during summer.

However, my wintertime visit with my wife was still worth it, as the racetrack offers an alternative thrill ride year-round via its Ringwerk Experience theme park.

The experience starts in a multimedia theater with a 360-degree moving platform, where a film takes visitors on a seven-minute immersive trip through the history of the racetrack.

The exhibit hall features a changing cast of racing vehicles that have burned rubber on the tarmac just outside, including such standouts as the high-tech Formula 1 BMW from the early 2000s as well as an array of classic cars, like the 1957 Mercedes 300 SL, with its gull-wing doors and posh red interior. 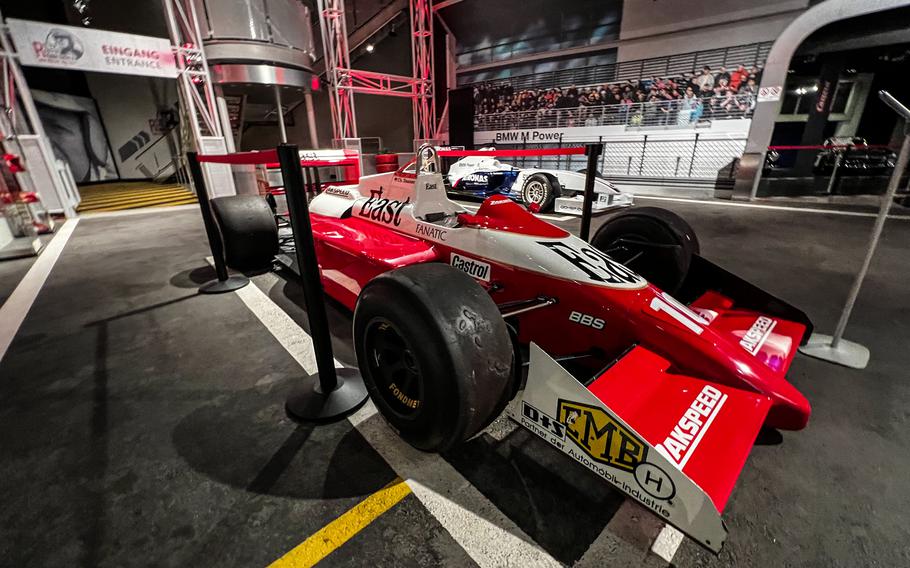 Different generations of Formula 1 racecars, from the 1970s to the early 2000s, are on display at Ringwerk motorsport museum in Nuerburg, Germany, Jan. 15, 2022. (Alexander W. Riedel/Stars and Stripes) 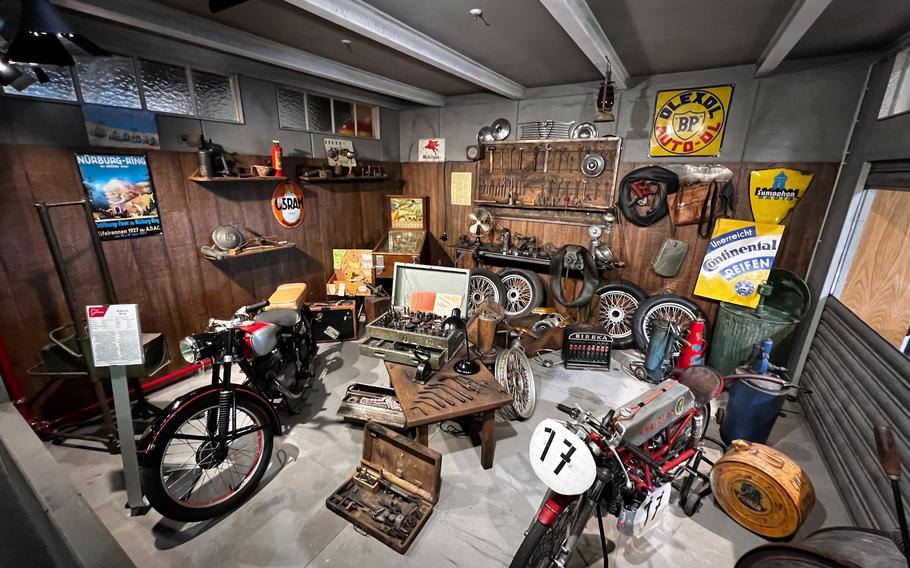 A motorcycle mechanic shop from the early days of racing, displayed at the Ringwerk Experience in Nuerburg, Germany, Jan 15, 2022. (Alexander W. Riedel/Stars and Stripes) 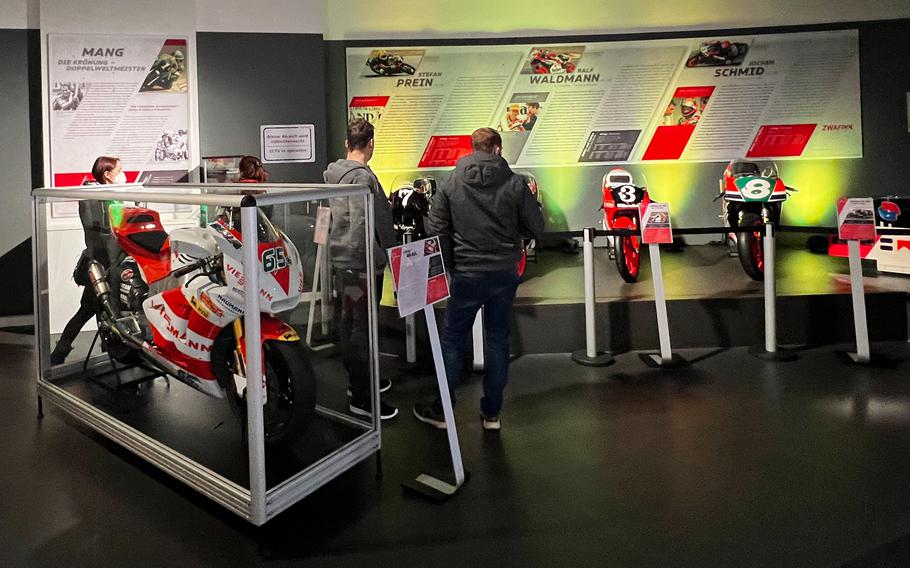 Visitors get a close view of Moto-GP motorcycles past and present at Ringwerk in Nuerburg, Germany, Jan. 15, 2022. (Alexander W. Riedel/Stars and Stripes) 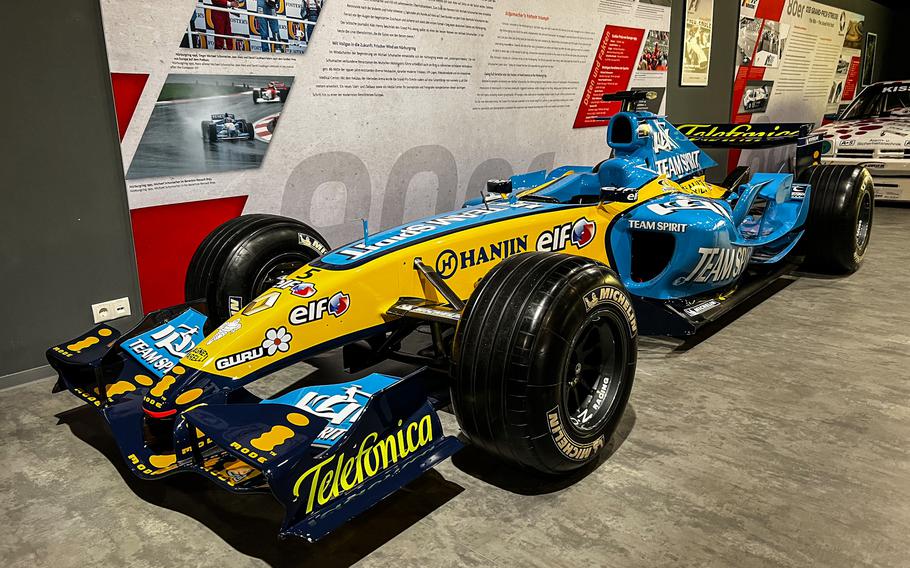 A Renault R25 Formula 1 racecar from the 2005 Championship season on display at Ringwerk in Nuerburg, Germany, Jan. 15, 2022. The motorsport theme park offers visitors the chance to get up close to racecars from different years and series. (Alexander W. Riedel/Stars and Stripes) 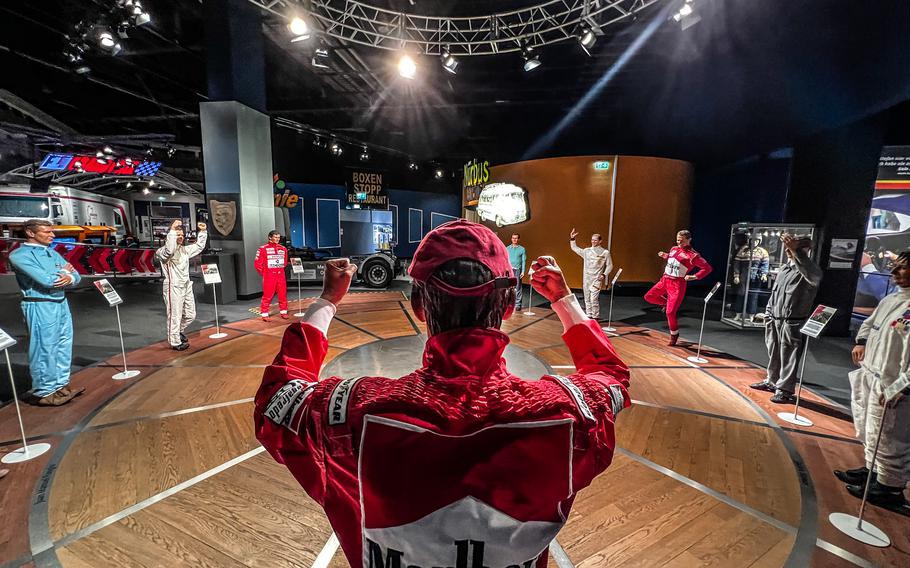 A jubilant figure of Niki Lauda cheers with other racing legends in the Ringwerk racing museum in Nuerburg, Germany, Jan. 15, 2022. Lauda nearly lost his life on the Nuerburgring race track during a fiery accident with his Formula 1 racecar in 1976. (Alexander W. Riedel/Stars and Stripes) 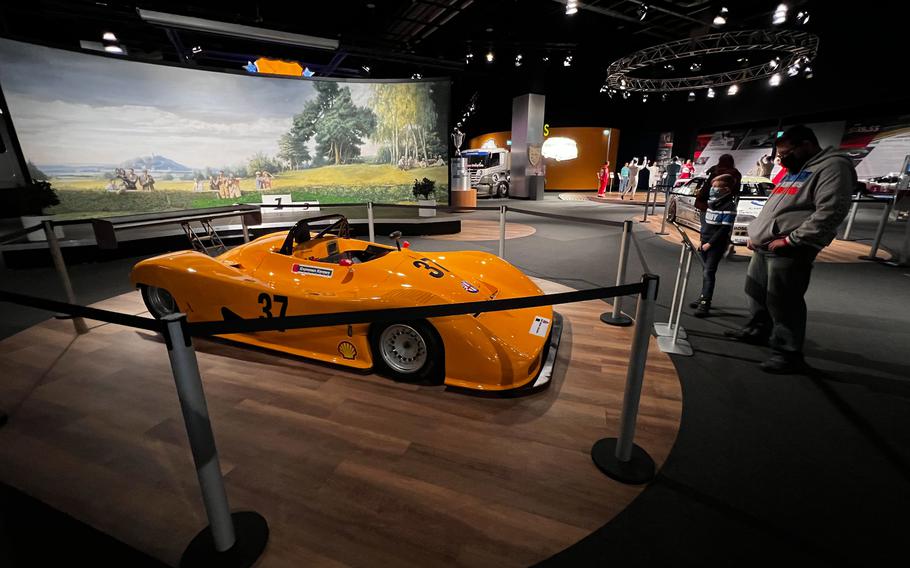 Visitors to the Nuerburgring's Ringwerk museum look at a 1993 Alpha Romeo Argo JM 21 in Nuerburg, Germany, Jan. 15, 2022. Alpha Romeo only built five vehicles of this type, which were used to in the European Interseries race championship. (Alexander W. Riedel/Stars and Stripes)

But a visit to the museum is not about reading plaques and descriptions. It’s about feeling a visceral automotive experience.

Visitors can discover the sensation of squeezing into a Formula 1 cockpit, listen in on crew communications and change the tires of one of these high-performance racers during a simulated pit stop. 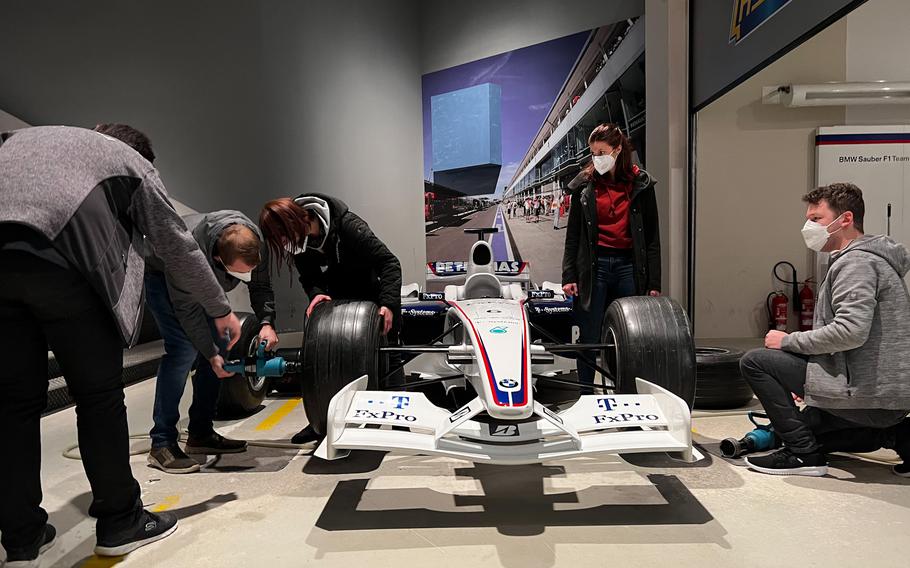 Visitors change tires on a BMW Formula 1 car at Ringwerk in Nuerburg, Germany, Jan. 15, 2022. Participants can also listen in on pit stop communication recordings and squeeze into a mock cockpit of one of the high-tech racing machines. (Alexander W. Riedel/Stars and Stripes) 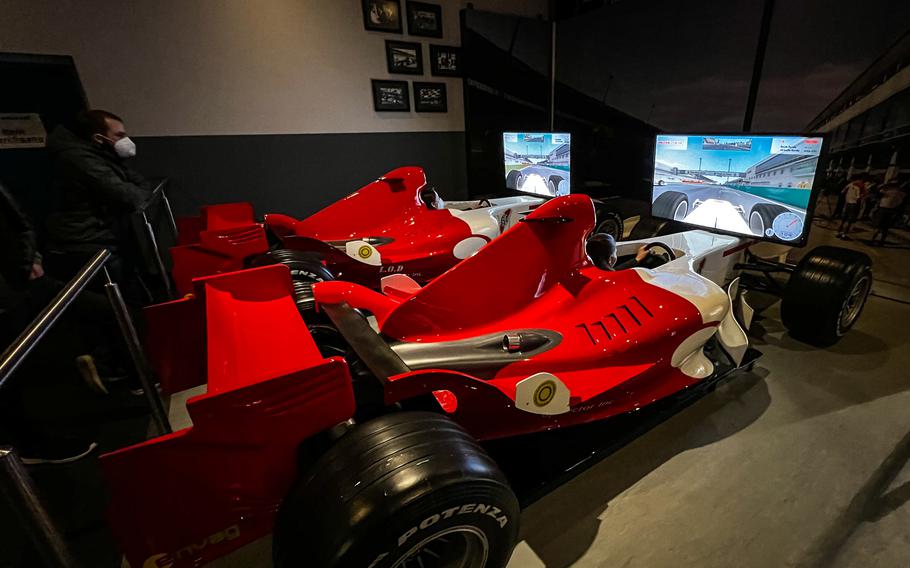 Although we had fun doing that, let’s just say my wife and I will not be hired on for Ferrari’s next season.

One of the most popular events at the Ring is the annual ADAC International Truck Grand Prix in July, where drivers drift semi-trucks around the curves like cars a fraction of their size. 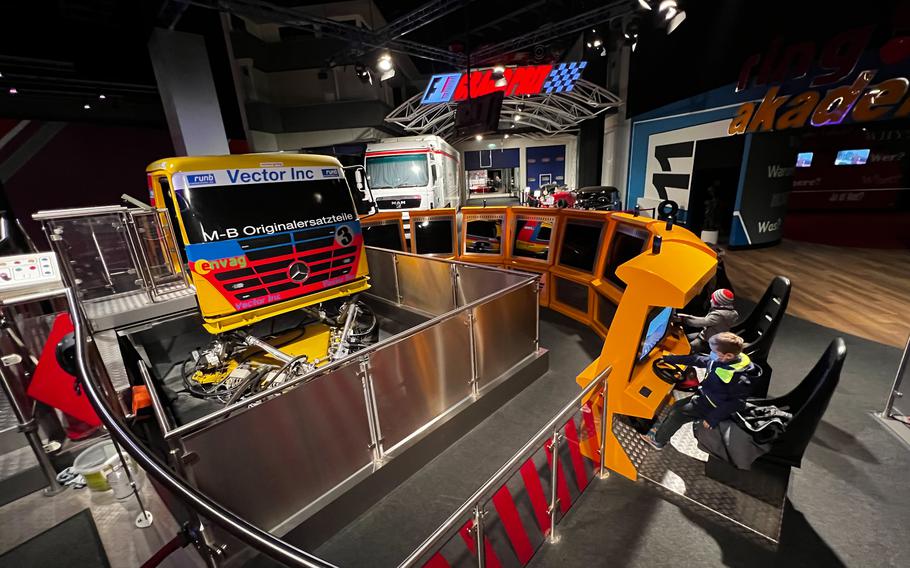 Kids play a truck racing video game in Nuerburg, Germany, Jan 15, 2022. A full-sized semitrailer truck cab simulator allows visitors to Ringwerk to experience the tilt and rumble of a racing truck as it drifts around the Nuerburgring track. Additional players can join in the same on-screen race from attached driver consoles. (Alexander W. Riedel/Stars and Stripes)

A life-sized simulator allows visitors to take the wheel and feel the tilt and tumble of the truck cab as they race around the track with other players on connected consoles.

The museum is not just for die-hard motorheads, though, and offers something for the entire family. That means even my hybrid-driving wife had a great time in the simulators.

Her favorite was the “Nurbus” Eifel-Taxi, an immersive virtual bus ride that offers mild-nausea-inducing fun for all ages reminiscent of the Knight Bus from the wizarding world of Harry Potter.

A silly but fun laser-tag ride and a large remote-controlled slotcar version of the course offer smaller visitors a chance to let loose on the trigger or hit the accelerator and go head-to-head for the pole position alongside family members and friends. 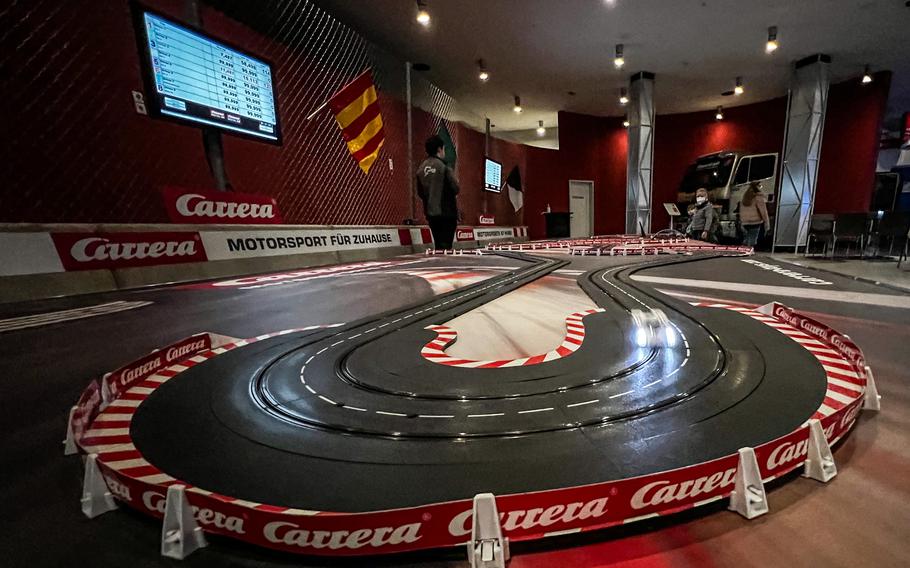 Children play with a Carrera slotcar replica of the Nuergburgring racetrack in Nuerburg, Germany, Jan. 15, 2022. (Alexander W. Riedel/Stars and Stripes)

We concluded our visit at the 4D movie theater, where the story of the notorious 24-hour LeMans-style automobile race, in which competing teams qualify with their own tuned vehicles to race around the clock, is told on a 3D screen accompanied by smells of the track and mists of rain.

Nearly four hours had flown by before we hit the finish line, but the duration of a visit to the museum will of course vary according to individual preference.

Nevertheless, whether it’s a rapid jaunt through the highlights or an all-day affair, a Ringwerk excursion has plenty of pleasurable options.

And wherever visitors fall on the automobile enthusiast spectrum, the park is likely to offer a good mix of technology and adrenaline rush — even in the middle of winter. 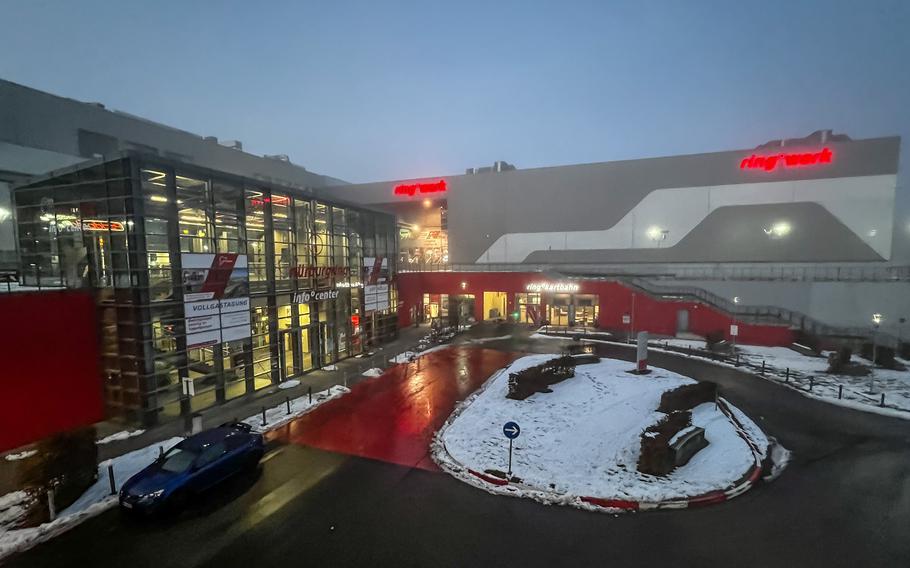 The Ringwerk museum and indoor go-karting track on a foggy day in Nuerburg, Germany, Jan 15. 2022. The complex is adjacent to the Nuerburgring racetrack finish line and features an interactive motorsports museum, simulators and shops. (Alexander W. Riedel/Stars and Stripes)

Directions: From Kaiserslautern, travel north toward on the Autobahn 1 and then shift to the Autobahn 48. At Ulmen, take the exit to B257, which will take you straight toward the racetrack. On non-race days there is free open-air parking in front and paid spots in the attached garage for 1.50 euros per hour or 12 euros per day.

Public transportation: From Kaiserslautern, travel to Koblenz on regional train RB 17. Transfer to RB 23 to Mayen. From there, take Bus 381 to Baar. Finally, from Baar, Bus 384 takes you straight to the racetrack.

Hours: Weekends only during the winter months, 11 a.m.-5 p.m. Starting in April, Wednesday through Sunday, 10 a.m.-5 p.m. Hours are subject to change depending on the race calendar.

Costs: Admission is 9.90 euros for adults and 7.90 euros for children. Parents visiting with up to four kids can take advantage of the family ticket at 32 euros.

Food: The small cafe in the museum is currently closed because of public health limitations. There is a Subway right outside. During racing season weekends starting in March, the Devil’s Diner near the entrance to the Nordschleife has American-style burgers.