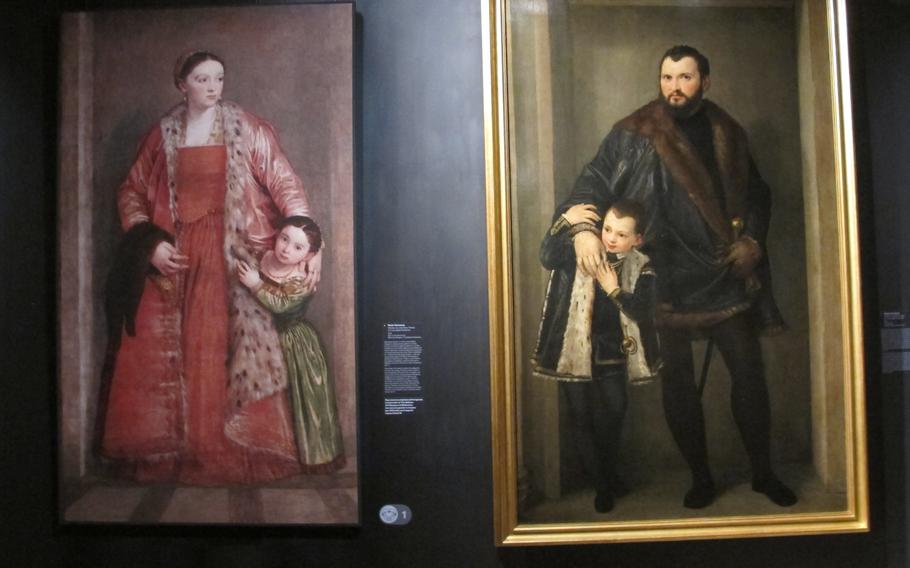 Buy Photo
The depiction of the Porto family of Vicenza, Italy, in two portraits painted by Paolo Veronese in the 1500s was considered revolutionary. The pair have been separated for centuries, held by two museums a continent apart. (Nancy Montgomery/Stars and Stripes)

The Porto family has been separated for centuries.

Livia Thiene da Porto and her daughter Deidamia have lived, if not breathed, at the Walters Art Museum in Baltimore. Livia’s husband, Iseppo, and her son Leonidas stayed at the Uffizi Galleries in Florence, Italy.

Organizers of an art exhibit at Vicenza’s Basilica Palladiana titled “The Renaissance Factory” had intended to reunite the foursome depicted in a pair of majestic, full-length portraits painted by Verona-born Paolo Veronese in 1552.

But it was not to be. Complications stemming from the pandemic prevented shipment of the Baltimore painting, museum officials said, so a digitized version was hung in Vicenza instead.

Despite COVID-19’s hindrance of the Porto family reunion, however, the exhibit nevertheless was unveiled, and it gathers exquisite masterpieces of painting, sculpture and architecture.

Covering a 35-year period, it explores how what had been a sleepy little province in the 1400s became a center of Renaissance art a century later. The title of the exhibit is an allusion to this phenomenon.

All it took was a thriving trade in high-quality silk, along with some grandees who revered the glories of the ancient world and were willing to patronize a group of local artistic geniuses.

Veronese and his friends architect Andrea Palladio, painter Jacopo Bassano and sculptor Alessandro Vittoria would become famous all over the world. 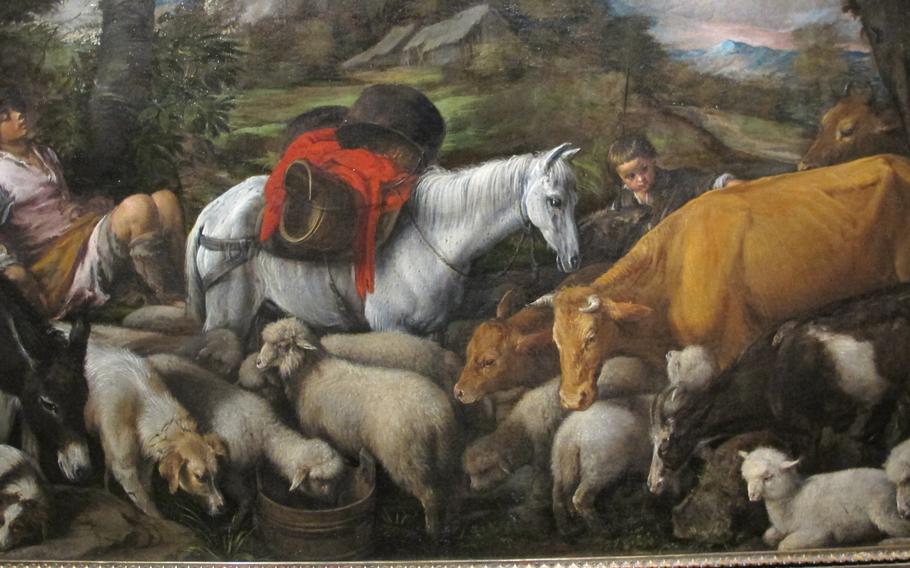 Buy Photo
“Pastorale” by Jacopo Bassano depicts a sleeping shepherd at one with his livestock and nature, as a sharp-eyed child seems to keep watch and a white horse draws the eye. It is among the masterpieces on display in “The Renaissance Factory,” an art exhibit in the Italian city of Vicenza. (Nancy Montgomery/Stars and Stripes) 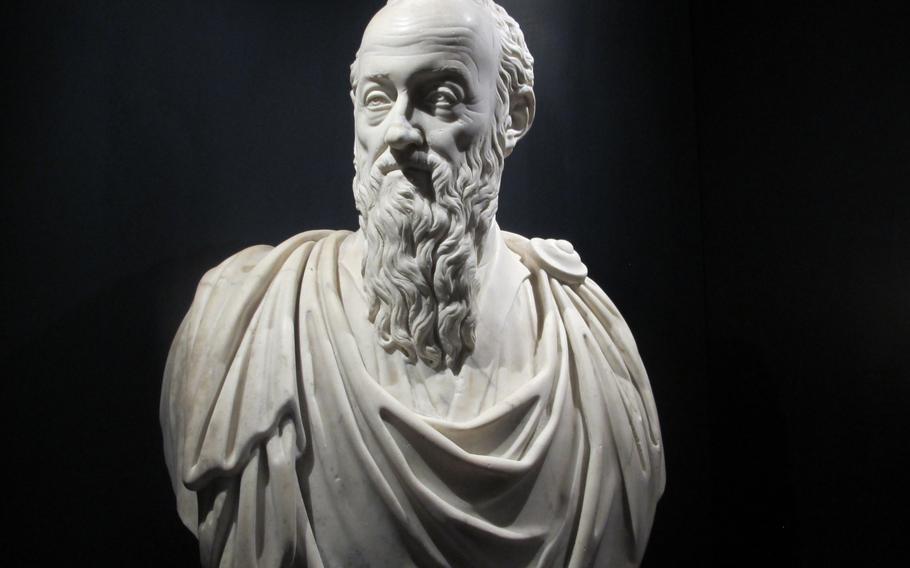 Buy Photo
This bust of a judge by Alessandro Vittoria helped cement his status as a preferred portraitist of the 16th-century elites in Italy’s Veneto region. The bust, on loan from the Louvre in Paris, is included in “The Renaissance Factory,” an art exhibit at the Basilica Palladiana in Vicenza, Italy. (Nancy Montgomery/Stars and Stripes) 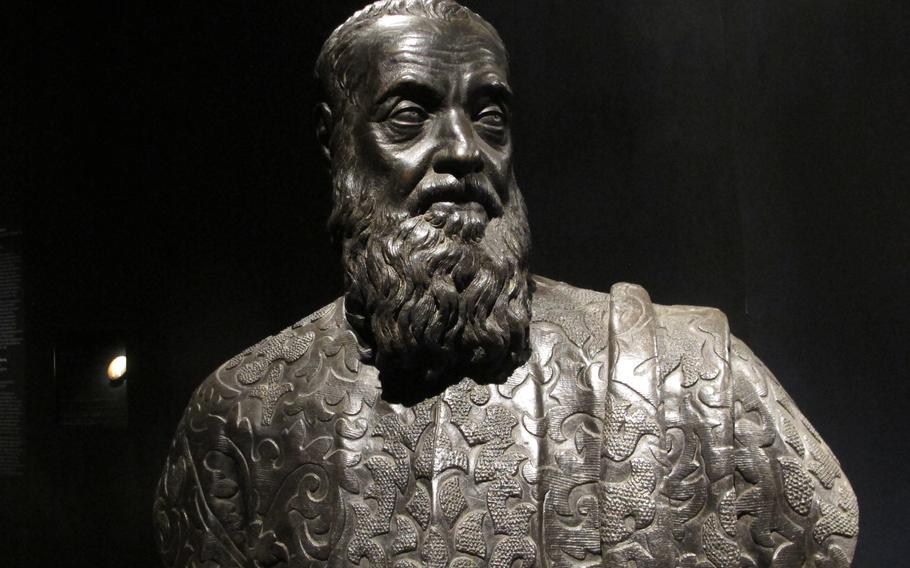 Buy Photo
Alessandro Vittoria’s bust of University of Padua professor of medicine Tommaso Rangone, one of his most important patrons. Rangone was known for his treatises on syphilis and the plague. An Italian basilica is the present home of the bust, which is included in an exhibit running into late April. (Nancy Montgomery/Stars and Stripes) 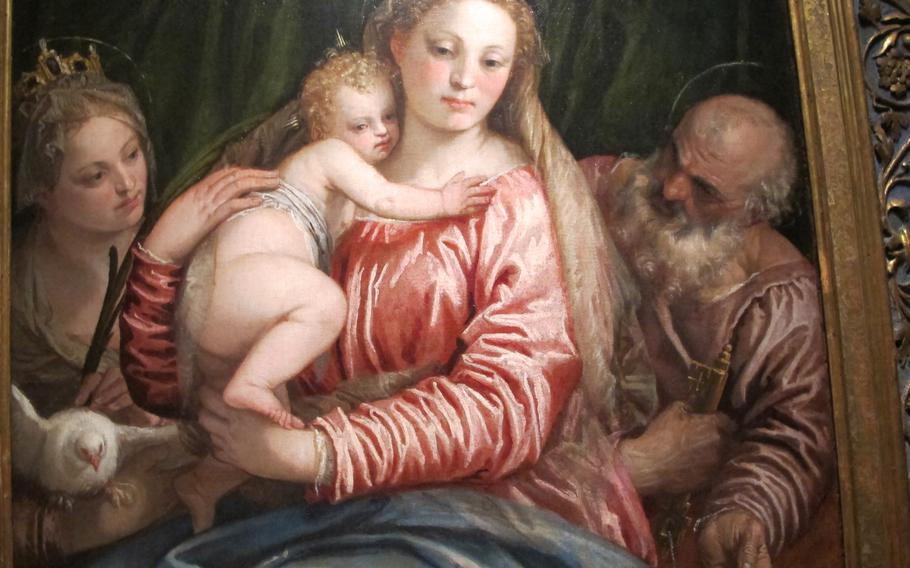 Buy Photo
Paolo Veronese’s painting of the madonna and child is considered among his masterpieces. It is currently on display in an exhibit titled “The Renaissance Factory” in Vicenza, Italy. (Nancy Montgomery/Stars and Stripes) 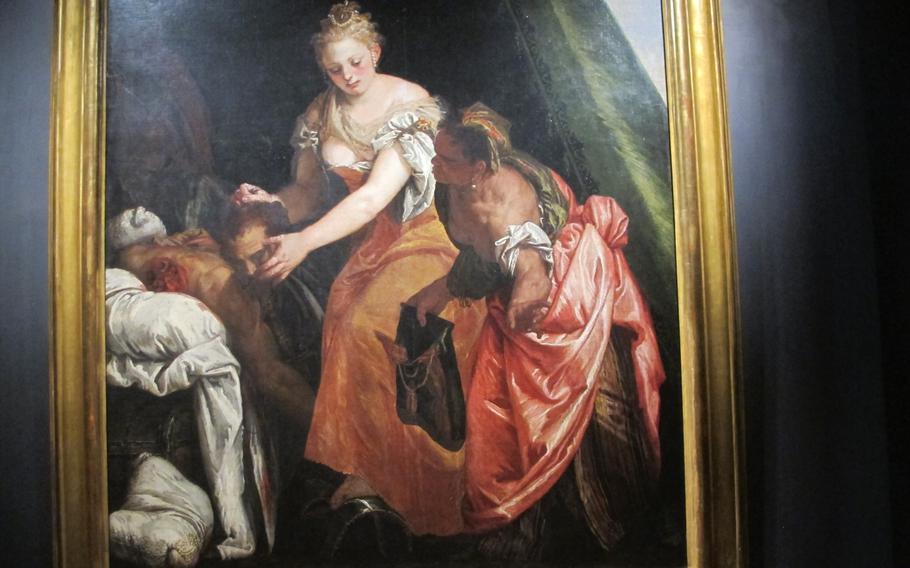 Buy Photo
Paolo Veronese’s image of Judith, the biblical widow who saved the Israelites from oppression by decapitating the Assyrian general Holofernes after getting him drunk, is among the racier depictions. Veronese is one of four Renaissance luminaries whose works make up an exhibit running until late April in Vicenza, Italy. (Nancy Montgomery/Stars and Stripes) 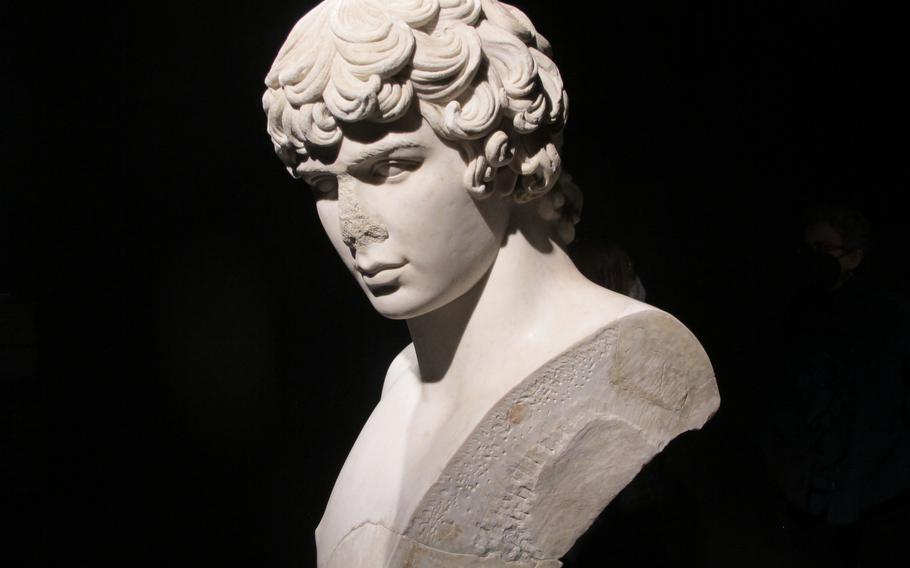 Buy Photo
Ever wonder if the Roman Emperor Hadrian’s lover, Antinous, who was renowned for his beauty before he drowned in the Nile at age 19, was really all that? This bust, which was in a 16th-century private collection and is now on display at an art exhibit in Vicenza, Italy, can confirm. (Nancy Montgomery/Stars and Stripes)

Several of the foursome’s masterpieces are included in the exhibit, which also weaves books, fabrics, precious objects and tapestries from the era — as well as the price tags of some of them — to tell the tale of the exceptional artistic life of Vicenza from 1550 to 1585.

“The Renaissance Factory” is all about Vicenza, in fact, and it gathers artworks from some of the world’s most important museums.

The richly colored Porto portraits were probably painted for the family’s palace in Vicenza, which, like the basilica housing the exhibit, was designed by Palladio.

It’s easy to see how the portraits were deemed revolutionary. The parents and children are posed casually, with the affection between them apparent.

Leonidas holds one hand onto Iseppo’s arm, while the boy’s other hand is entwined with his father’s. Deidamia peeks out from Livia’s fur-lined cloak, her mother’s hand on her shoulder.

The very setting of the exhibit attests to Vicenza’s prominence as a cradle of Renaissance culture, with Palladio as its poster boy. His renown spans both time and place.

He is, of course, a revered figure for Italians. Vicenza has a museum dedicated to him, statues of him are plentiful, and many of the wondrous works he designed are today visitor destinations, which can be toured on curated walks.

Thomas Jefferson modeled Monticello and the University of Virginia on Palladian concepts, as did modern-day architect I.M. Pei in his design for the main entrance of the Bank of China building in Hong Kong.

The commercials used the line "diamonds are forever," coined decades before by Philadelphia copywriter Frances Gerety, who never married, and were set to Welsh composer Karl Jenkins’ orchestral work named after the Italian architect.

Vicenza’s Renaissance treasures have proved to be equally enduring and glamorous. Many of them can now be viewed in all their dazzling brilliance in one location — and for much less than the cost of a precious stone.

“The Renaissance Factory” runs through April 28. Vicenza is about an hour’s drive west of Venice.