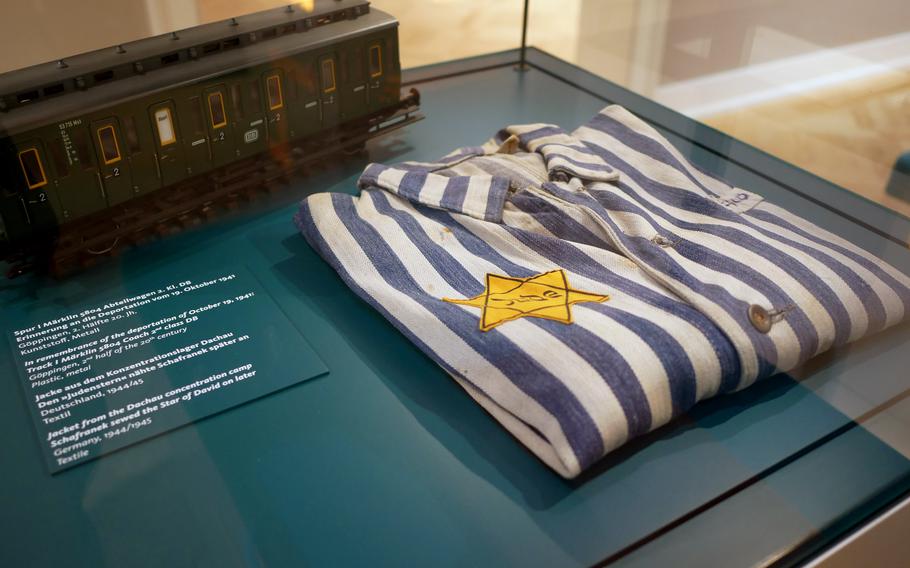 Buy Photo
One of the exhibits in the Jewish Museum in Frankfurt is the concentration camp jacket of Friedrich Schafranek, He later collected model trains that reminded him of his deportation train. (Michael Abrams/Stars and Stripes)

For more than 800 years, the Jewish community was a part of Frankfurt’s history. It was once the second largest in Germany, behind only Berlin.

Then came the dark days of the 20th century when they were deported and murdered by the Nazis during the Holocaust.

Today, Frankfurt again has a thriving Jewish community. Their history, from the Middle Ages to the present, can be traced at two places: the Jewish Museum and the Museum Judengasse.

The Jewish Museum first opened in 1988, housed in the 19th century Rothschild Palais on the banks of the Main River. It featured artifacts and displays of Jewish life from about 1100 to the 1950s. In 2015, the museum closed for renovations and to build an extension.

Unfortunately, technical problems with renovations kept the museum closed for five years, not reopening until late 2020. 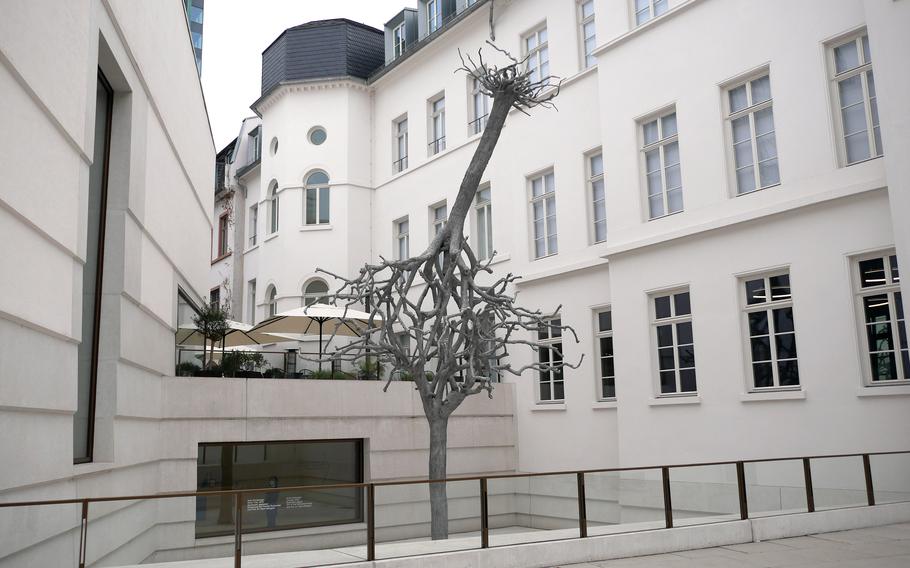 Buy Photo
This untitled sculpture by Ariel Schlesinger stands in the courtyard of the Jewish Museum in Frankfurt, Germany. At right is the Rothschild Palais, a neoclassical building that has been home to the Jewish Museum since 1988. At left is the modern extension opened in 2020 that features a library, conference room, space for temporary exhibits and a museum cafe. (Michael Abrams/Stars and Stripes)

It might have been worth the wait. The museum is more modern and spacious, and includes interactive exhibits. The new extension, dubbed the Lichtbau because of all the light that falls through its windows, contains a library, exhibit space, a cafe, a conference room and a bookstore.

The permanent exhibit looks at Jewish history in Frankfurt from 1800 to today.

The top floor starts with the present, then works its way from the past, through the Holocaust and exile. There are many videos here worth watching, including interviews with eyewitnesses to the past and present.

Also worth seeing is the painting of Moses by Moritz Daniel Oppenheim and the unusual “The Five Maccabees” Hanukkah candelabrum by Benno Elkan. 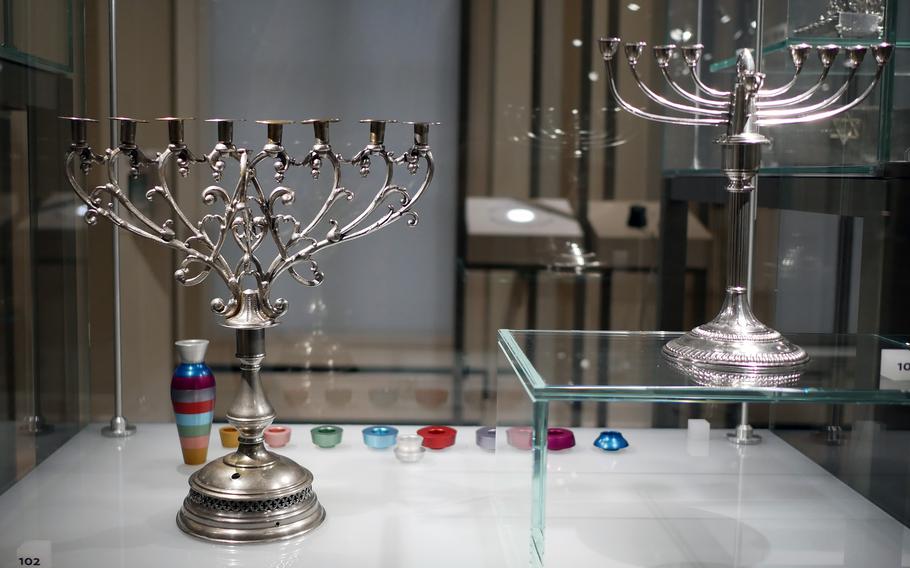 Buy Photo
A pair of silver hanukkiahs on display at the Jewish Museum in Frankfurt. In the background is a colorful, modern interpretation of one by Avi Biran. (Michael Abrams/Stars and Stripes) 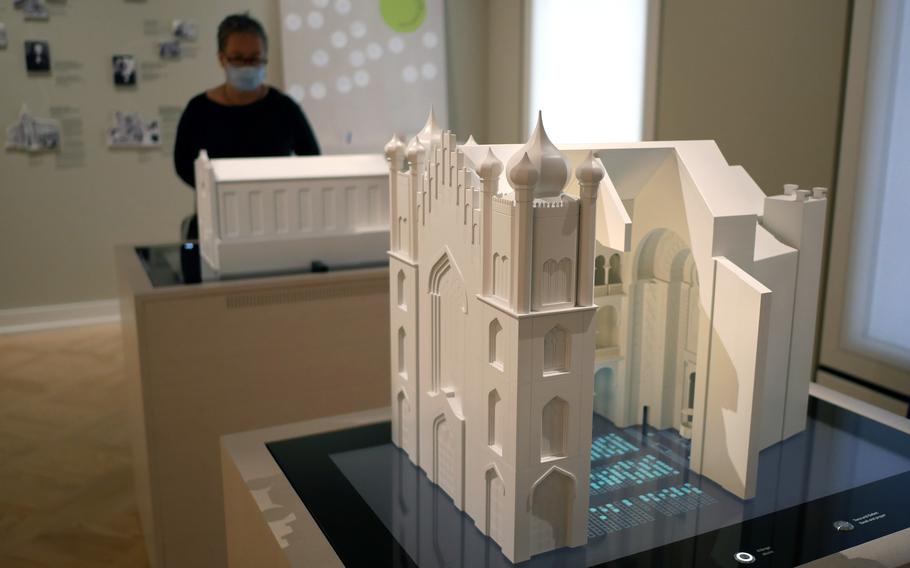 Buy Photo
A cutout view of Frankfurt’s Main Synagogue at the Jewish Museum in Frankfurt. In the background, a visitor looks at a model of the synagogue of the Israelite Religious Society. Both were destroyed by the Nazis. (Michael Abrams/Stars and Stripes)

The second level of the museum is dedicated to tradition and ritual. Here you can see Torah rolls and a Talmud, a case with circumcision instruments, models of two destroyed Frankfurt synagogues and “Ask the Rabbi,” a video installation by Timm Ringewaldt.

The bottom floor covers family and everyday Jewish life and features the history of the Rothschilds, the Frankfurt banking/industrialist family, and the Frank family, whose best-known member, Anne, brought the Holocaust to us all at a very personal level with her diary. 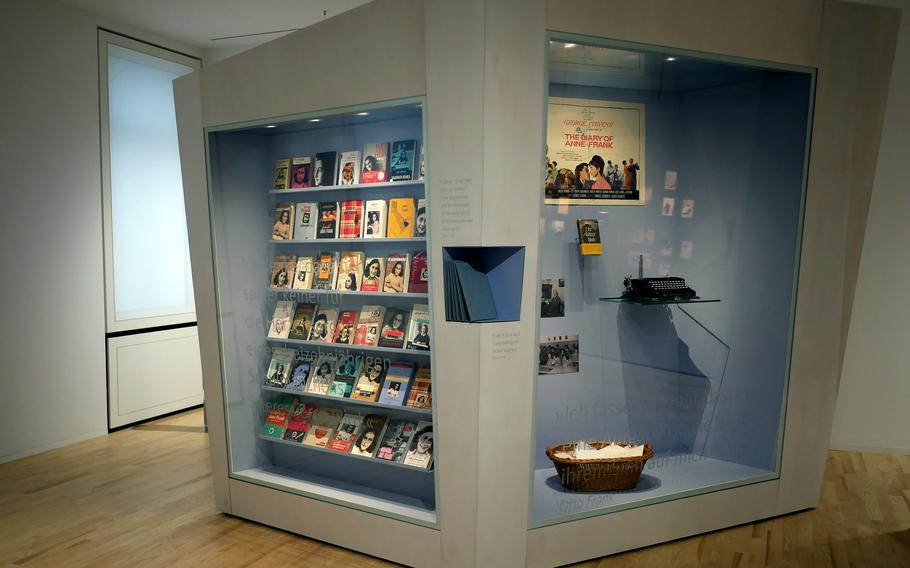 Buy Photo
An area in the Family Frank room at the Jewish Museum in Frankfurt is dedicated to Anne Frank and her famous biography. The Frank family, Anne, her mother, father and sister, moved from Frankfurt to Amsterdam, where they were arrested and sent to Nazi concentration camps. Only her father survived. (Michael Abrams/Stars and Stripes)

About a mile away from the Jewish Museum, the Museum Judengasse has a unique history and location inside the building housing the Frankfurt utilities company.

In 1987, the construction of the building unearthed the foundations of five houses and two baths of the old Jewish ghetto, the Judengasse.

When the city only wanted to document the finds and keep on building, protest erupted. A compromise was found – the building would be constructed over the excavations. Five years later the Museum Judengasse opened. 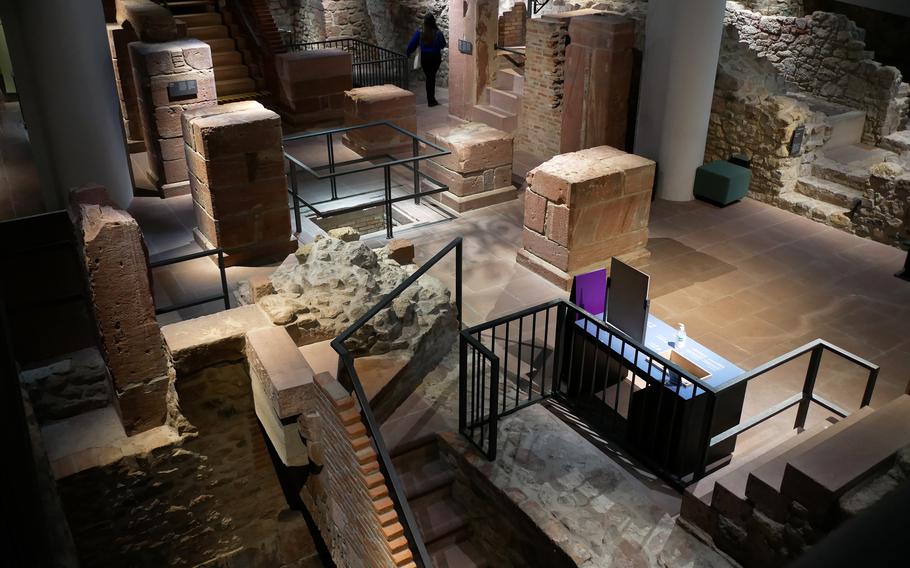 Buy Photo
The foundations of houses of the Judengasse can be seen at the Museum Judengasse. It is incorporated into the customer service center of Frankfurt’s municipal utilities company. The foundations were found during construction of the building in 1987. (Michael Abrams/Stars and Stripes) 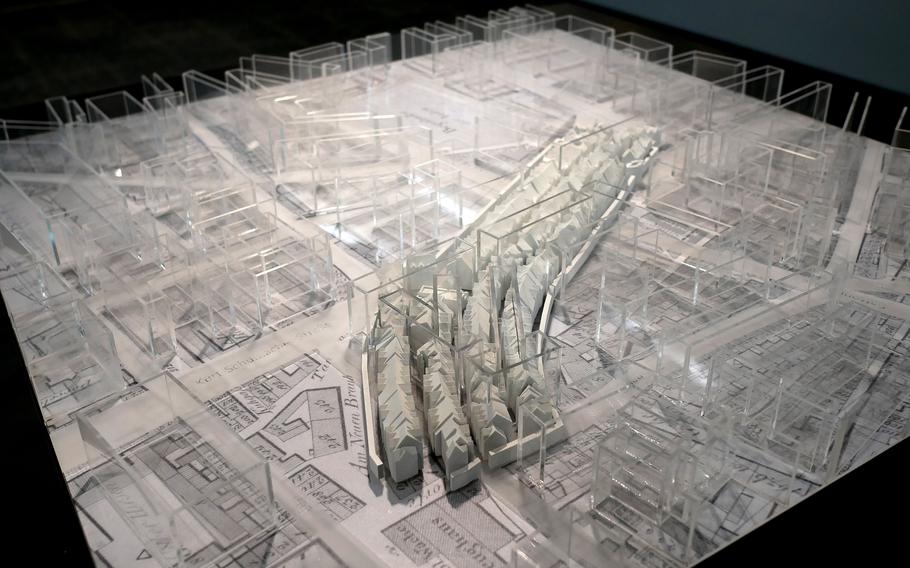 Buy Photo
A model of modern Frankfurt at the Museum Judengasse shows where the Judengasse ghetto would be. (Michael Abrams/Stars and Stripes) 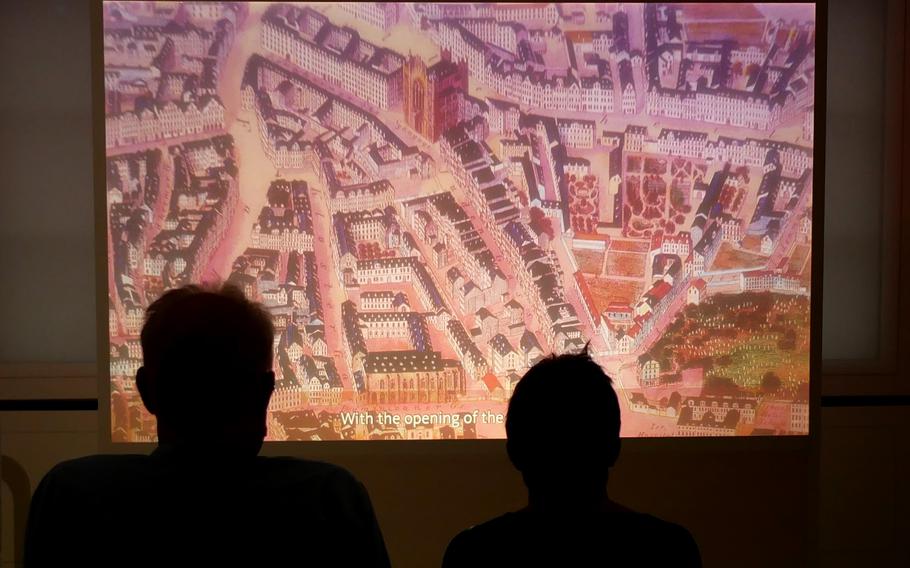 Buy Photo
Visitors to the Jewish Museum in Frankfurt view a video that shows where the city’s Jews lived in earlier times. Here you can see the Judengasse with its imposing Main Synagogue. (Michael Abrams/Stars and Stripes)

In 1462, the city’s Jews were forced to move to the cramped quarters of the Judengasse, which means Jewish alley.

At one time, more than 2,700 people lived in 195 houses. Only about 300 yards long, and at its widest, six yards, it was gated at each end, and the gates were closed at night and on Christian holy days.

In 1796, French troops bombarded Frankfurt and destroyed the northern end of Judengasse. After that, the Jews were no longer forced to live there. The ghetto was torn down and redeveloped but remained the center of Jewish life, with the city’s main synagogue there.

It was destroyed by the Nazis in November 1938, and the World War II bombings of Frankfurt demolished much of the surrounding area.

The museum was renovated and redone in 2016, its collection expanded with pre-1800 items from the Jewish Museum.

Inside, you can walk through the excavations and see the relics uncovered here. There are exhibits on the houses and the people who lived here, but also displays on how the inhabitants interacted with the outside, Christian world. Don’t miss the video that shows the transformation of the ghetto over the centuries.

Opposite the museum’s entrance is the Old Jewish Cemetery, used from 1272 to 1828.

On its wall is the centerpiece of the Neuer Boerneplatz memorial, 11,908 small blocks set into the wall, each inscribed with the name of a Frankfurt Jew who was deported and murdered during the Holocaust. 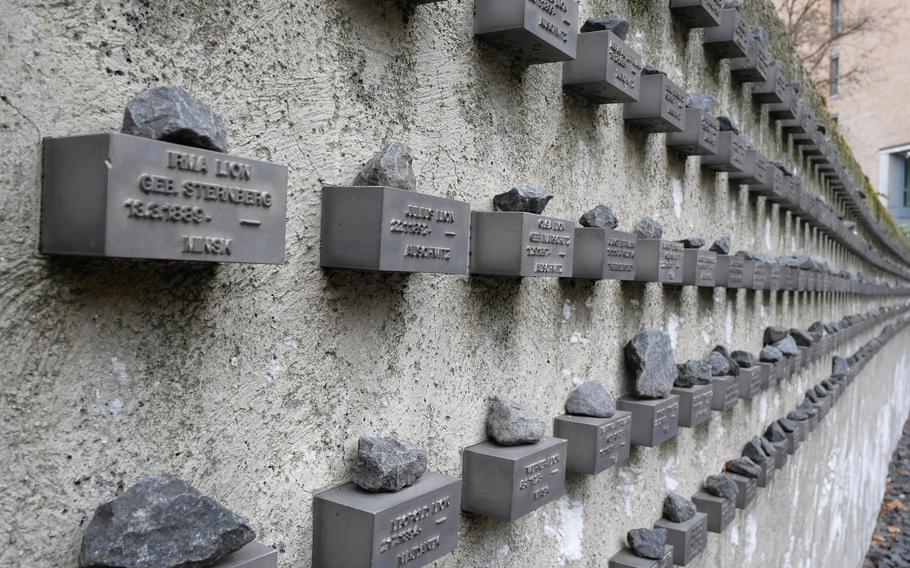 Buy Photo
On the wall of Frankfurt’s Old Jewish Cemetery, opposite Museum Judengasse, is a memorial with 11,908 small blocks set into the wall, each inscribed with the name of a Jewish Frankfurt resident who was deported and murdered during the reign of Nazi terror. (Michael Abrams/Stars and Stripes)

Address: The Jewish Museum (Juedisches Museum) is at Bertha-Pappenheim-Platz 1, and the Museum Judengasse, is at Battonnstrasse 47, both in downtown Frankfurt.

Parking: For the Jewish Museum, the Am Theater parking garage (Willy-Brandt-Platz 5) is closest.

For the Museum Judengasse, park at the Dom/Roemer (Domstrasse 1) or Konstabler (Toengesgasse 8) garages. If the weather is nice, you can park at the Roemer and walk to both museums. All cost 2 euros per hour weekdays and 1 euro per hour Sundays and German holidays.

Public transportation: Take subway U1 through U5 and U8, or trams 11 and 12 to the Jewish Museum. Get off at the Willy Brandt-Platz stop. For the Museum Judengasse, take subway U4, U5 to the Konstablerwache station or tram 11 or 12 to Battonnstrasse station.

The Judengasse Museum is open from 10 a.m. to 6 p.m. Tuesday to Sunday. Closed Monday.

Food: FLOWDELI, the kosher cafe in the Jewish Museum, it is open 11 a.m. to 5 p.m., Tuesday through Sunday.

Information: Online: juedischesmuseum.de. There is an airport-like security check at the entrance to both museums.

Michael Abrams
Mike is a photographer in Kaiserslautern, Germany. He has covered stories for Stripes throughout Europe, the Middle East, Africa and Afghanistan. Born in Peoria, Ill., he graduated from DODEA’s now-defunct Frankfurt American High School.