Speyer museum houses stunning collection of aircraft, boats and even a space shuttle 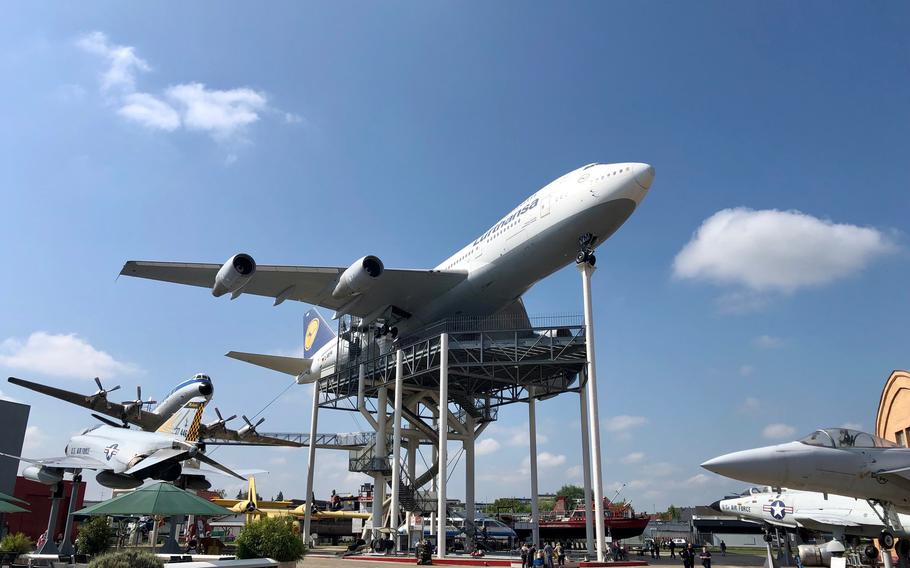 Buy Photo
A Lufthansa 747 jumbo jet towers over a Vickers Viscount airliner and assorted warplanes at the Technik Museum Speyer in Germany. A staircase leads up to both airliners, but its not an easy climb. (Slobodon Lekic/Stars and Stripes)

The Technik Museum Speyer, located near the center of Speyer and its famous medieval cathedral, is a must-see for those interested in military and civil aviation as well as all other forms of transportation.

The massive facility, just 40 miles from the Kaiserslautern area, boasts a world-class collection of aircraft, ships, cars, trucks, submarines and even a Russian space shuttle.

A unique aspect of this interactive museum is that you can enter many of the exhibits, including a German U-boat, a rescue ship and several airliners displayed at various ends of the venue.

The most impressive is probably the Lufthansa Boeing 747 jumbo jet, the world’s first wide-body jet airliner. It’s quite a climb up the steel structure and staircase, which allow it to tower over the rest of the exhibits.

Inside the 747, visitors can clamber through the cavernous interior and even walk out on the plane’s left wing, with its wonderful view of the surrounding area. Children will especially enjoy the slide down from the plane’s elevated position.

They will also enjoy the bumper cars and play areas strategically set beneath some of the exhibits to allow parents a chance to visit them without worrying about the little ones.

Other “planes on poles” include the Antonov An-22, the world’s largest turboprop transport plane, which served in the Soviet air force during the Cold War. Its vast cargo hold is open to visitors, but the crew rest areas and the cockpit are off-limits.

There is also a submarine and an oceangoing rescue ship perched on supporting pillars, allowing visitors to get a good look at their undersides. The coastal submarine U-9 of the German navy is a favorite with visitors, with long lines of people waiting for a chance to tour the cramped interior. 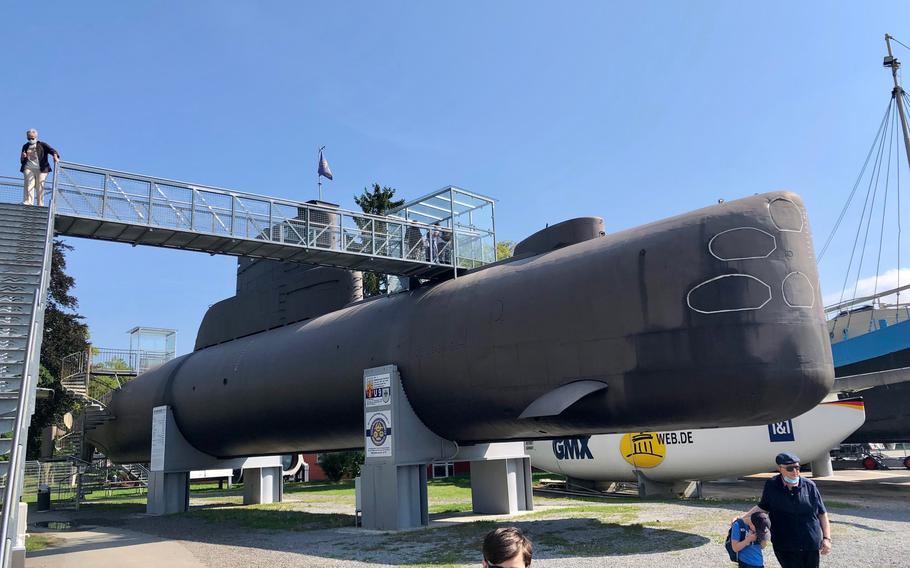 Buy Photo
Another popular exhibit at the technical museum in Speyer is the German Navys U9 submarine, which served operationally from 1967 until 1993. The tour of the inside of the sub is one of the museum highlights for many visitors. (Slobodon Lekic/Stars and Stripes) 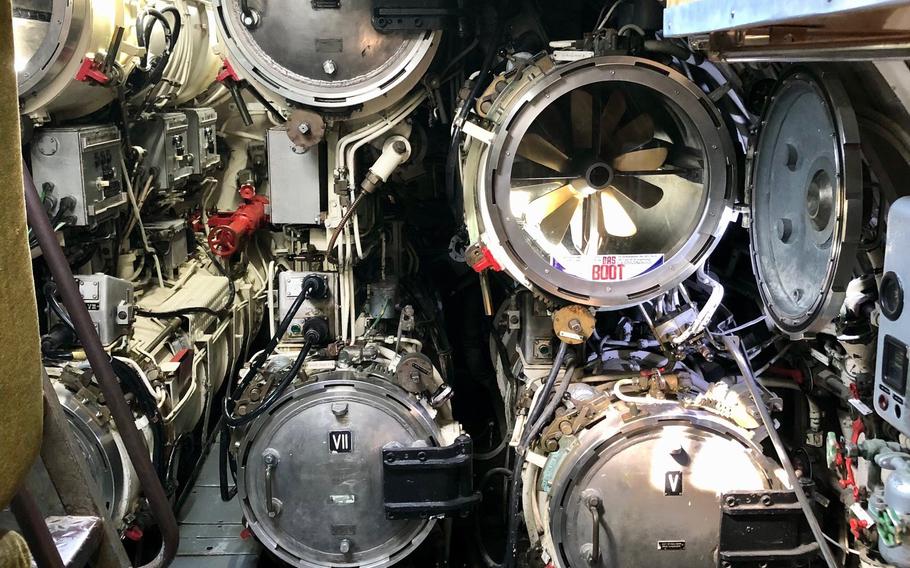 Buy Photo
The torpedo room of the German navys coastal U9 submarine at the Technik Museum Speyer in Germany. Hundreds of visitors line up during the weekend to tour the cramped interior of the sub. (Slobodon Lekic/Stars and Stripes)

The tour even includes the bathroom, with a very lifelike mannequin sitting on the toilet reading a magazine.

One of the highlights is the Russian Buran space shuttle, displayed inside the main building in the section dedicated to space exploration. Visitors can view its open cargo area from a walkway above the shuttle.

For real aviation buffs, the museum offers a selection of rare European aircraft difficult to find in the United States. These include a Fairy Gannet, an ungainly British-made anti-submarine turboprop, and a Soviet Yak-28 Firebar, a swept-wing twin-jet interceptor with a glazed nose. The plane was never used outside the Soviet Union. 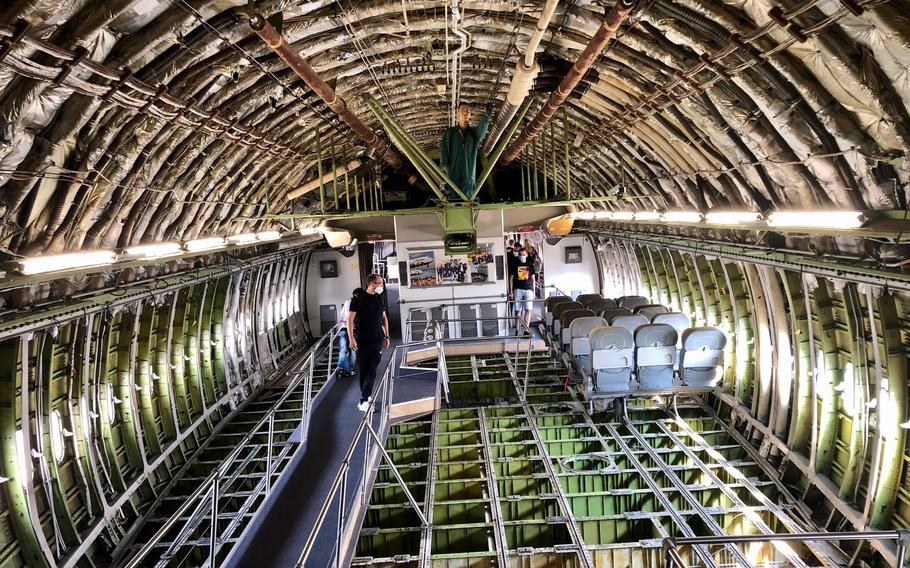 Buy Photo
The stripped-down interior of a Lufthansa Boeing 747 at the Technik Museum Speyer in Germany. The museum offers some unique views of airliners, warplanes, submarines and even a Russian Burnan space shuttle. (Slobodon Lekic/Stars and Stripes) 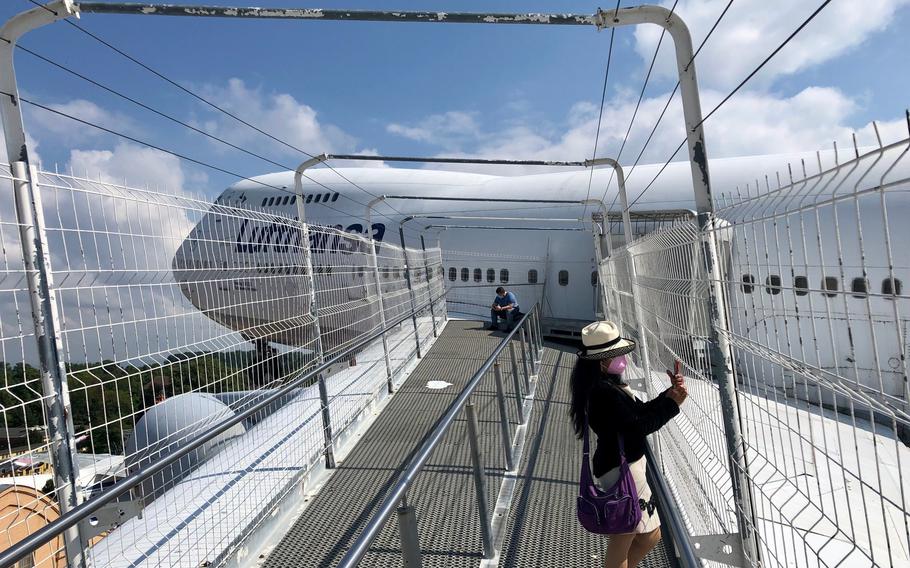 Buy Photo
A view of the Lufthansa Boeing 747 at the Technik Museum Speyer from a walkway on its left wing. (Slobodon Lekic/Stars and Stripes) 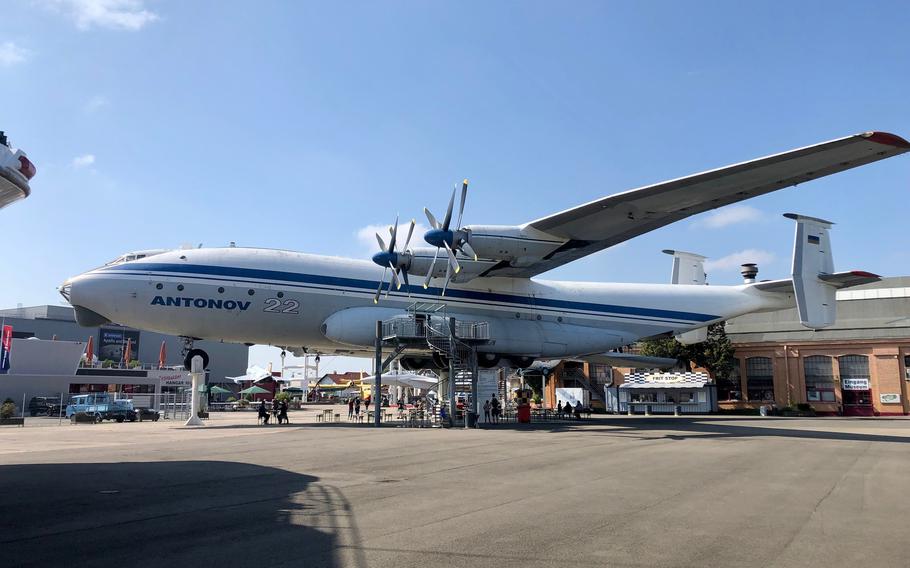 Buy Photo
Another plane on poles at the Technik Museum Speyer is the Soviet Antonov An-22, the worlds largest turboprop transport. Visitors can explore the expansive cargo hold of the plane, which was rarely seen in the West during its operational career. (Slobodon Lekic/Stars and Stripes) 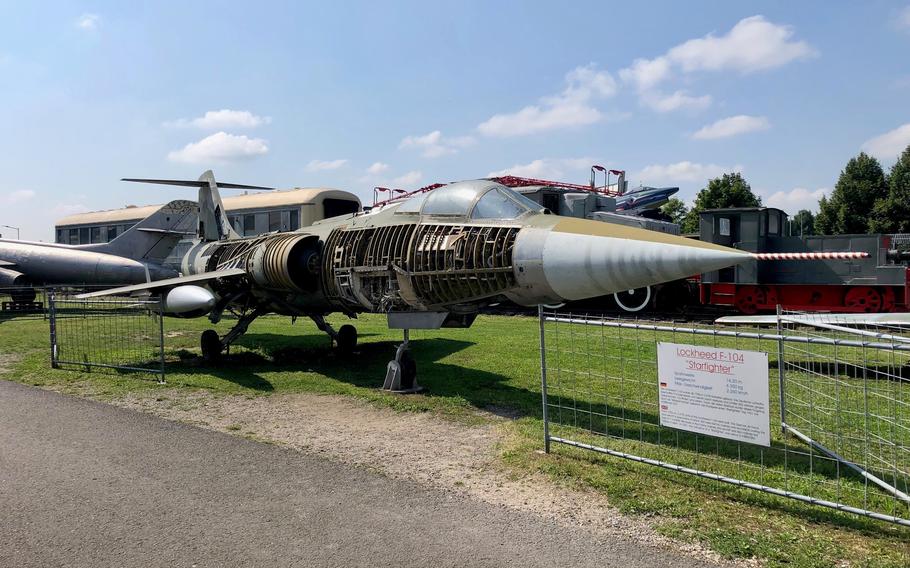 Buy Photo
An unusual view of a stripped down Lockheed F-104 Starfighter fighter jet operated by the German Air Force during the Cold War, at the Technik Museum Speyer in Germany. (Slobodon Lekic/Stars and Stripes) 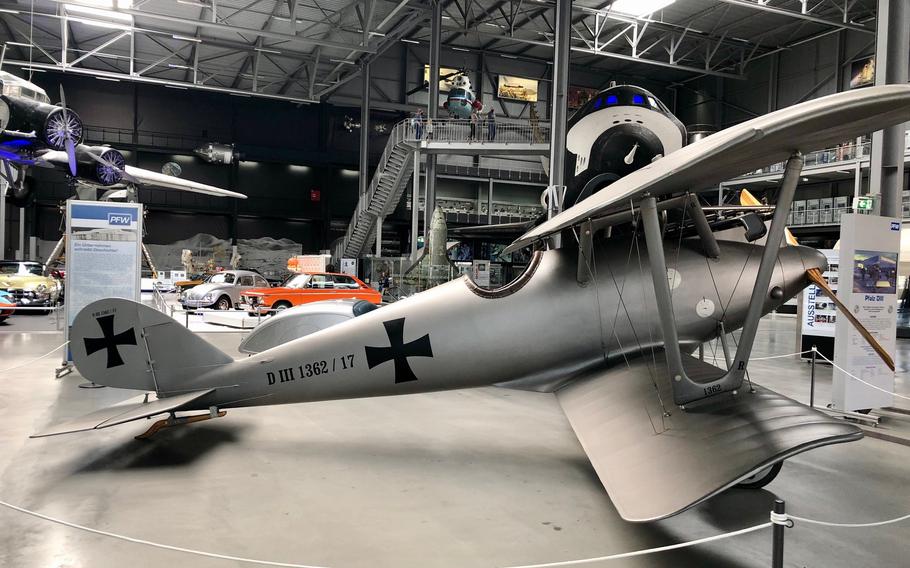 Buy Photo
The Pfalz DIII fighter used by the German flying corps during World War I was built in a factory that existed on the site of the current technical museum near Speyer, Germany. (Slobodon Lekic/Stars and Stripes) 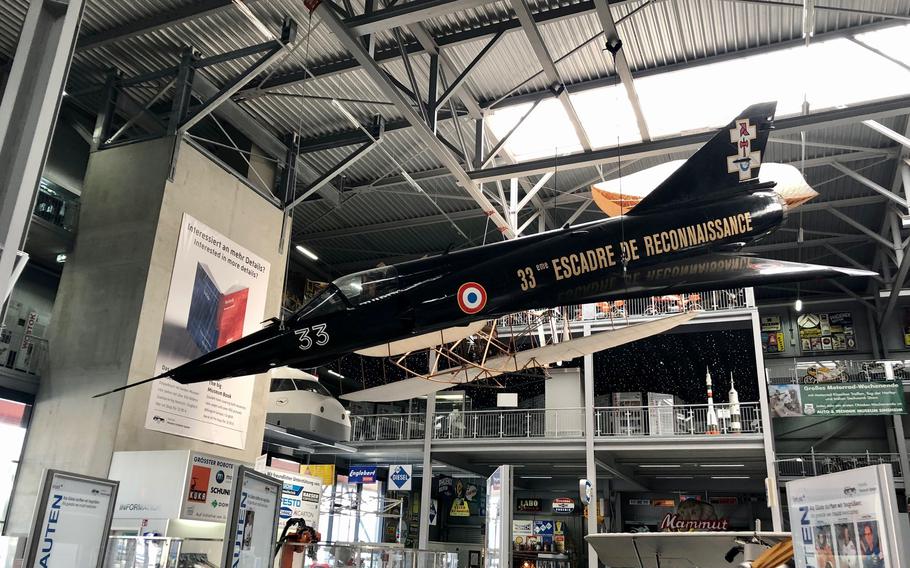 There is also the Nord Noratlas, a joint Franco-German twin prop, twin-boom transport plane that was operated extensively by both air forces during the Cold War.

Inside the main building, there is a huge selection of classic cars, trucks, fire engines, locomotives and even World War II minisubs. 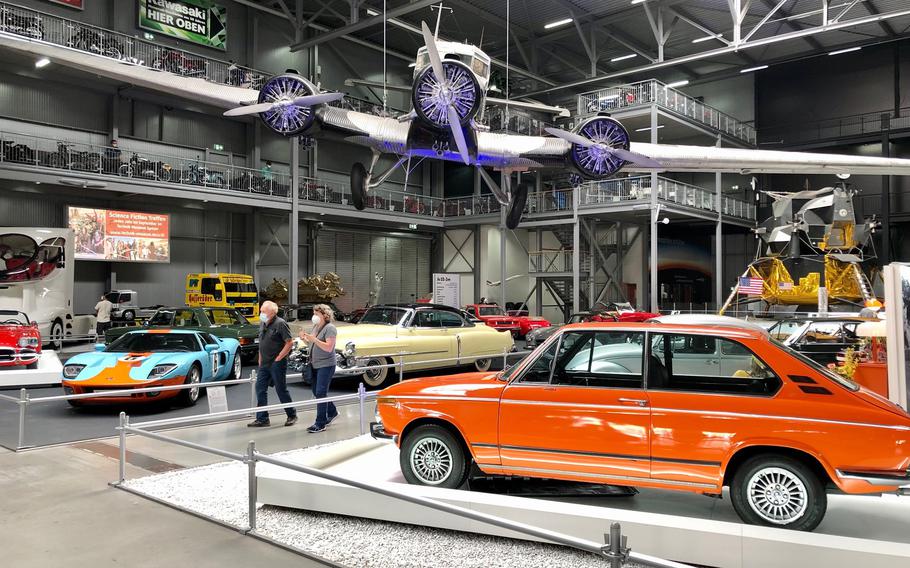 Buy Photo
In addition to aircraft, the Technik Museum Speyer in Germany features a huge collection of classic cars and other vehicles. (Slobodon Lekic/Stars and Stripes)

Some of the more curious include BMW’s postwar microcar, the egg-shaped Isetta, with its tiny single-cylinder engine. The entire front end of the stubby vehicle swung out to allow entry to the two seats.

The museum also features an IMAX Dome movie theater as one of its most popular attractions. The gigantic screen and amazing sound system guarantee a wonderful cinema experience.

The museum has a main restaurant and a fast-food counter, and there are seating areas under the wings of several planes where you can have a picnic if you bring your own food and drinks from home.

Or you can walk 15 minutes to Speyer’s main pedestrian street, Maximilianstrasse, with its wide selection of restaurants and cafes. 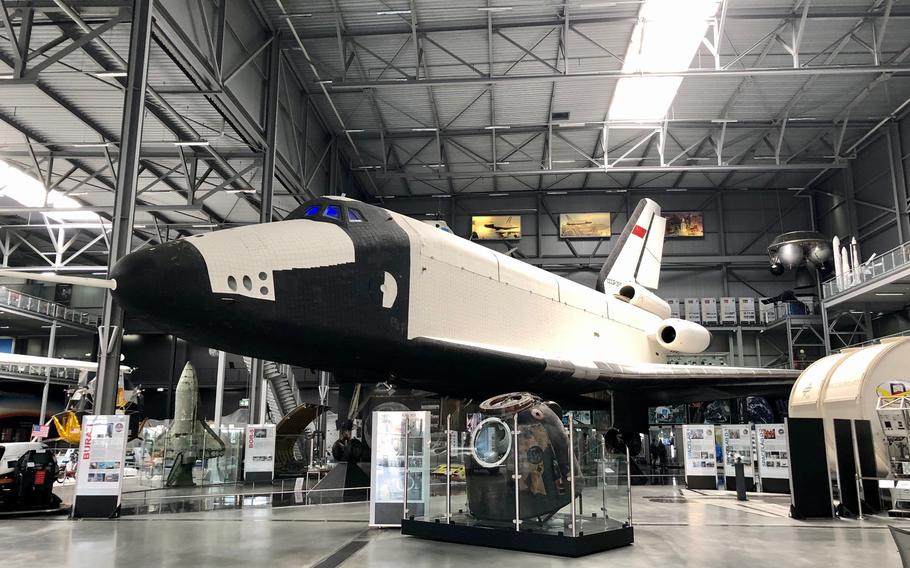 Buy Photo
An example of the Soviet Buran space shuttle built during the 1980s. At the Technik Museum Speyer in Germany, it's exhibited with an open cargo hold which can be viewed from the walkway above it. (Slobodon Lekic/Stars and Stripes)

Address: Am Technik Museum Speyer 1, 67346 Speyer. From Kaiserslautern, take the A6 east toward Mannheim, and turn south on the A61 to Speyer. There are road signs to the museum as you enter the city, and it’s difficult to miss the Boeing 747 perched above the road. A shorter, scenic route is to take Mannheimerstrasse from Kaiserslautern toward Bad Durkheim via Frankenstein, and then continue down the Weinstrasse toward Speyer.

Food: A moderately priced restaurant and a fast-food counter are in the museum complex.

Admission: 17 euros for adults, 13 euros for children 5 to 14. A coronavirus test or proof of vaccination is not needed at the entrance. But you must have one of these in order to sit indoors in the main restaurant.  Make sure to register your visit in advance at https://speyer.technik-museum.de.