Buy Photo
One of the entrances to the Simserhof fortification in eastern France. The underground complex, which was part of the Maginot Line of defenses that ran along France's eastern border, produced its own electricity, had air filters that ran 24/7, and enough food and drinks for soldiers to live underground for months. (Slobodan Lekic/Stars and Stripes)

There’s nothing like a visit to France to get away from a German summer of nonstop rain or unairconditioned buildings during a heat wave. The escape is even better when the attraction in France is free or inexpensive, and full of history — like Simserhof this summer.

An hour west of Kaiserslautern, and two hours from Spangdahlem, Simserhof was built between 1929 and 1938 as part of the Maginot Line, a string of fortifications along France’s eastern border, which were supposed to protect against another invasion by Germany after World War I.

Today, it’s a museum where visitors walk through miles of well-preserved tunnels, mess halls, barracks, kitchens and medical facilities. They look at World War II weaponry, electrical and air filtering systems, the tables French troops dined at during their long months underground, the rough beds they slept on, even the toilets they used. 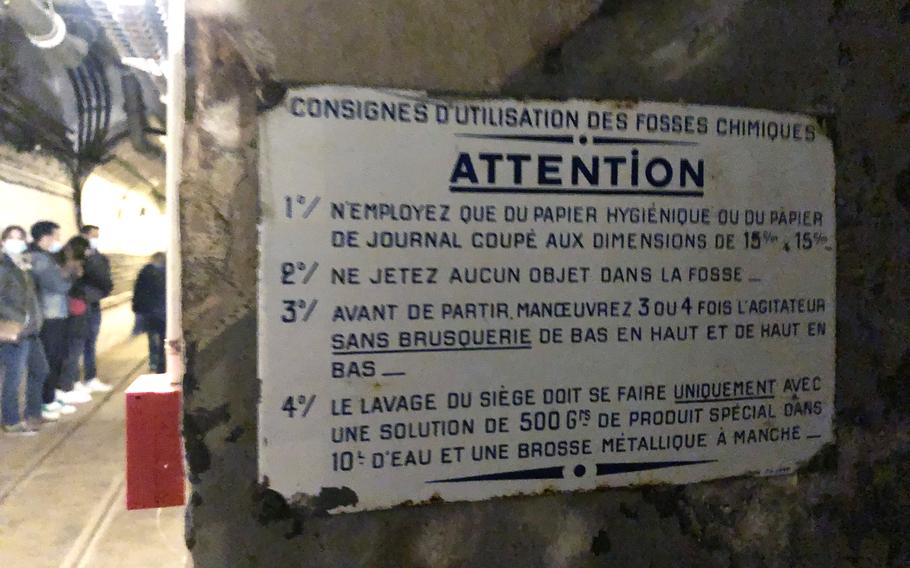 Buy Photo
A sign in the Simserhof fortification in eastern France tells soldiers how to clean latrine seats, how to flush after using a latrine, and to use only toilet paper or newspaper cut into squares after using the facilities. Nearly 880 French soldiers spent months in the tunnel complex from the start of World War II in September 1939 until France fell to Nazi Germany in June 1940. (Karin Zeitvogel/Stars and Stripes) Buy Photo
The dentist chair in Simserhof, a WWII fortification that was part of the Maginot Line in eastern France. If the dentist couldn't fix a soldier's dental issue, he simply pulled out his tooth or teeth, according to Benjamin Bellott, a guide at Simserhof, which has been a museum since 1970. (Karin Zeitvogel/Stars and Stripes) 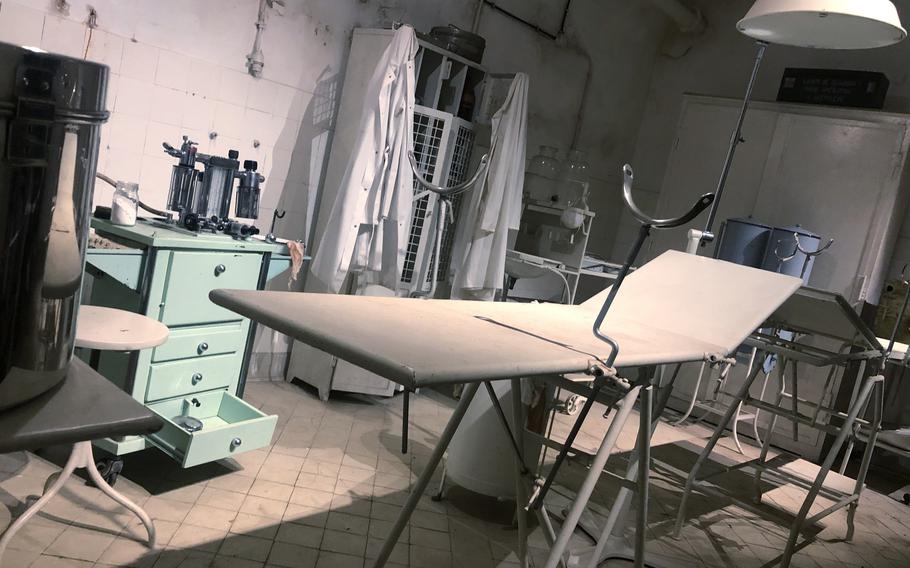 Buy Photo
The surgery room at the Simserhof fortification in eastern France, which was part of the Maginot Line. Soldiers requiring surgery while in the underground complex in the first nine months of World War II were anesthetized with chloroform or ether. (Karin Zeitvogel/Stars and Stripes) A depiction of Jesus Christ sits in a small alcove in one of the tunnels in Simserhof, a WWII fortification that was part of the Maginot Line in eastern France. (Karin Zeitvogel/Stars and Stripe) Buy Photo
One of the French soldiers who lived in the Simserhof fortification in eastern France in the early months of World War II painted Snow White and the seven dwarfs on the walls of one of the dining halls. French troops lived 90 feet underground in the complex for nine months until they were ordered to surrender to the Germans after the fall of France in June 1940. (Karin Zeitvogel/Stars and Stripes) 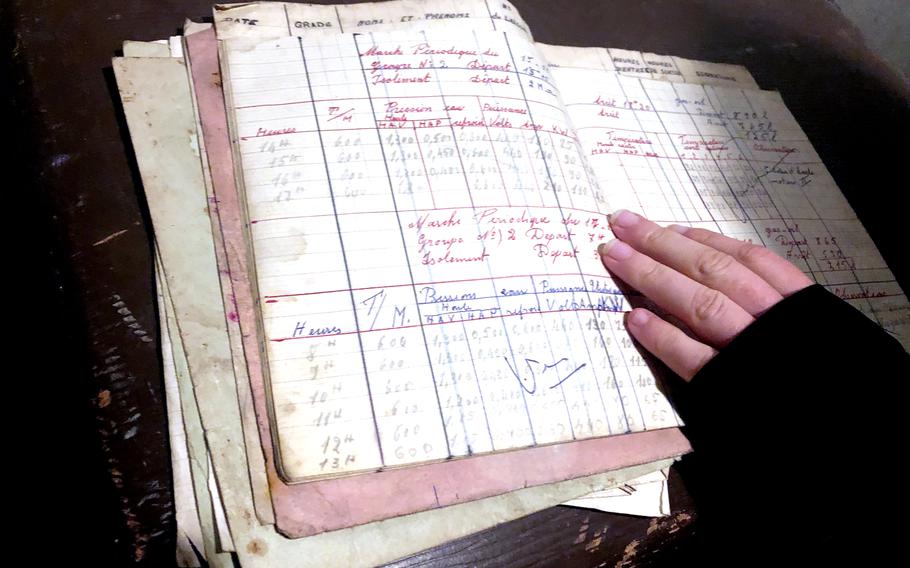 Buy Photo
A logbook in the barracks at the Simserhof fortification in France annotates water pressure and electrical output in the underground complex. The Maginot Line fortification produced its own power and ran air filters 24 hours a day. (Karin Zeitvogel/Stars and Stripes) Buy Photo
A kitchen in the Simserhof fortification, which was part of the Maginot Line in eastern France. French soldiers spent months in the underground tunnel facility during World War II. (Karin Zeitvogel/Stars and Stripes)

Simserhof’s website says it’s still closed, more than a year after it went dark as the coronavirus swept across Europe. But a call to the museum found that it had quietly reopened, with tours available in English, French or German. And they’re free, for the moment.

Writing on a travel website, one visitor described a tour of the fortification as a lesson in masterful engineering and “the madness of war.”

The temperature in the tunnel complex in mid-July was around 50 degrees. A musty smell hung in the air, and damp pierced the fleece tops and leather jackets of a group of 12 French and American visitors who descended into the Simserhof to get a sense of what hundreds of French soldiers lived through, 90 feet underground, in the early months of WWII.

Pre-coronavirus tours included a ride on a narrow-gauge train, but since the museum reopened at the end of June, tours have been entirely on foot. They start with a video showing how French jubilation at the end of World War I shifted a few years later to fear and an effort to bolster defenses, as fascist governments came to power in neighboring Italy in 1922 and later in Germany.

The Maginot Line was a key part of the French government’s defensive strategy. It cost tens of millions of dollars in today’s money.

Gen. Charles de Gaulle, who led Free France against Nazi Germany during the war and was elected president in 1958, was against the project, arguing that France would do better to invest in armor, aviation and reconstruction.

“But we were leaders in building fixed fortifications,” Simserhof guide Benjamin Bellott said during a two-hour tour of the site on Bastille Day. “Our big mistake was believing that the fortifications would hold.”

Soldiers from France’s 153rd Fortress Infantry Regiment, the 155th Position Artillery Regiment, and three engineering units went into the Simserhof on Sept. 3, 1939, after the German invasion of Poland started WWII.

For nine months, those soldiers slept, showered, were treated by dentists and doctors, and, during the one-month Battle of France in 1940, tried to hold off the Germans.

One of the soldiers painted Snow White and the seven dwarfs on the walls of the mess hall, adding a little gaiety to life underground.

At Christmas, the troops drank champagne and lit sparklers.

A menu on a table in the kitchen featured beef every day and included a 35-minute recipe for potatoes cooked with onions and bacon.

Germany got around the Maginot Line defenses by invading France via Belgium, where there were few fortifications — the French believed Germany would respect Belgium’s neutrality.

But France did not heed de Gaulle's exhortation to develop aviation capabilities, focusing instead on technologies of the previous war. Germany, on the other hand, had built the Luftwaffe, and used its superior air power and airborne infantry to quickly capture or take out fortifications like Simserhof.

The soldiers inside the Simserhof were the last in a Maginot Line fortress to surrender when France fell in June 1940.

Germany occupied the fort for nearly five years after that, until the 44th Infantry Division captured it in December 1944, according to the Army's Center of Military History. It was retaken by the Germans a few months later, before being liberated in March 1945, two months before the war in Europe ended, by the U.S. 100th Infantry Division. 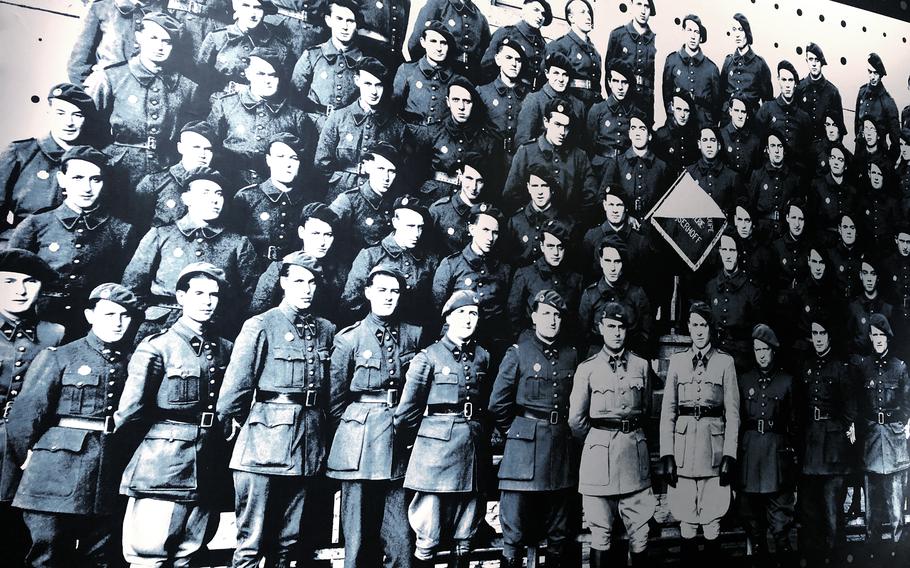 Buy Photo
A photo on the wall of the Simserhof fortification in eastern France shows some members of the 153rd Fortress Infantry Regiment, who spent months inside the underground complex, one of the biggest forts in the Maginot Line. (Karin Zeitvogel/Stars and Stripes)

Hours: Open for guided tours in English, German or French from Tuesday to Sunday, 10 a.m. to 5 p.m.

Cost: Tours are usually 13 euros for adults, 9 euros for children aged 6 and up, free for kids 5 and under. In July, they were free of charge for everyone.