Hiking through history along Germany's longest river, the Rhine 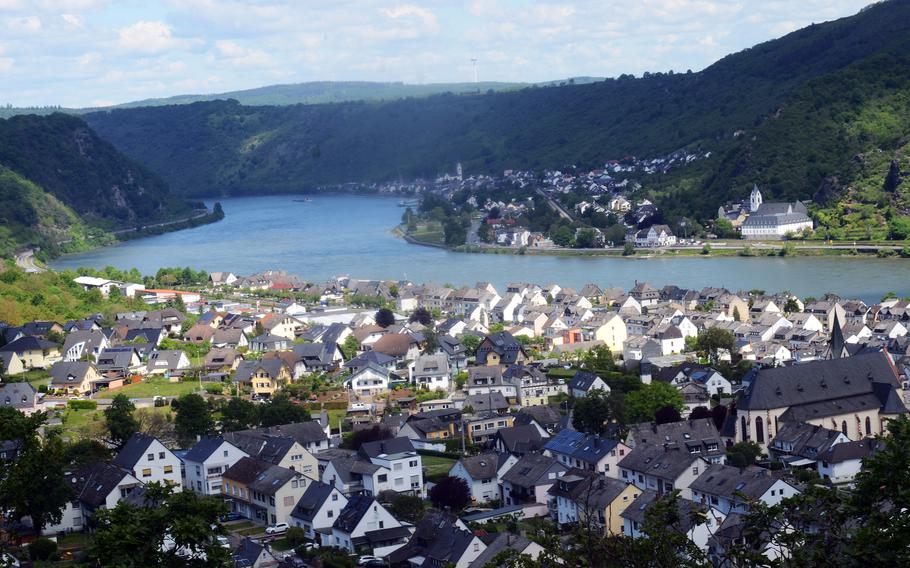 Buy Photo
A view of Bad Salzig, Germany, and the Rhine River from a cliff on the RheinBurgenWeg, June 5, 2021. (David Edge/Stars and Stripes)

Scores of medieval castles, palaces and fortresses dot the banks of Germany’s longest river, the Rhine, offering a glimpse into Europe’s and the country’s past.

One of the best ways to take in the cultural and historic lessons held in the Rhine Valley is to hike one of the many trails that make their way along the river.

My friends and I hiked part of the RheinBurgenWeg, or the Rhine Castles Trail, on a late spring day. The trail stretches around 120 miles, from Rolandsbogen to Bingen, along the Rhine River. We picked it up in the small town of Bad Salzig, an hour northwest of Wiesbaden and about 90 minutes north of Kaiserslautern.

Experienced hikers in our group pointed out that in addition to the spectacular views of the river and the castles, the trail offers a good way to prepare for the Army Combat Fitness Test. The terrain can be seriously challenging, so good hiking boots are a must, as are a water bottle, a first-aid kit, snacks and a fully charged cellphone, or a power pack you can use to charge it en route.

We started our 8-mile adventure in the center of the town, on the left side of the river, and wound our way up past quaint little shops, restaurants and a beautiful 18th century church until we found a marked path that led us to the hills. 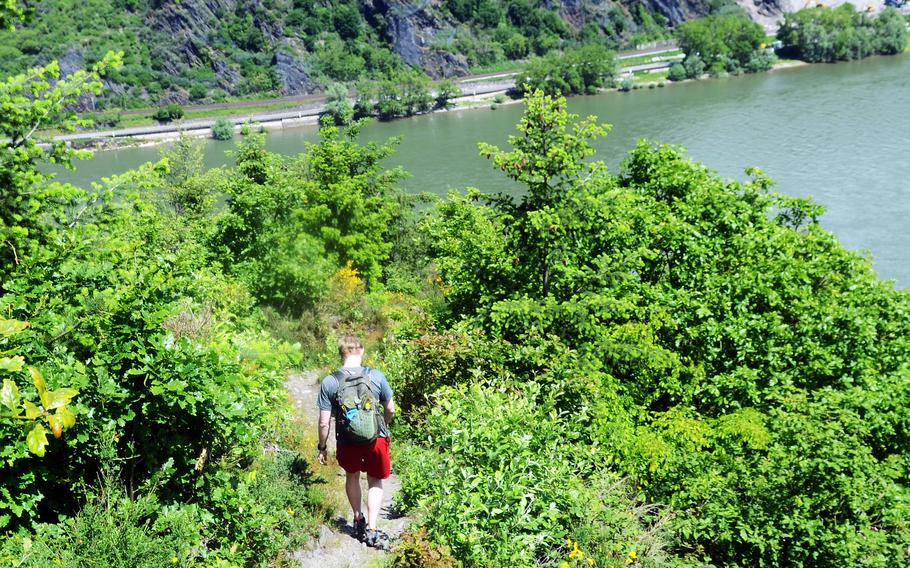 Buy Photo
Joshua Seaman, a U.S. soldier based in Wiesbaden, Germany, hikes down part of the RheinBurgenWeg hiking trail near the town of Bad Salzig, June 5, 2021. The trail runs for 120 miles along Germany's longest river, the Rhine, passing scores of castles and other historic buildings along the way. (David Edge/Stars and Stripes) 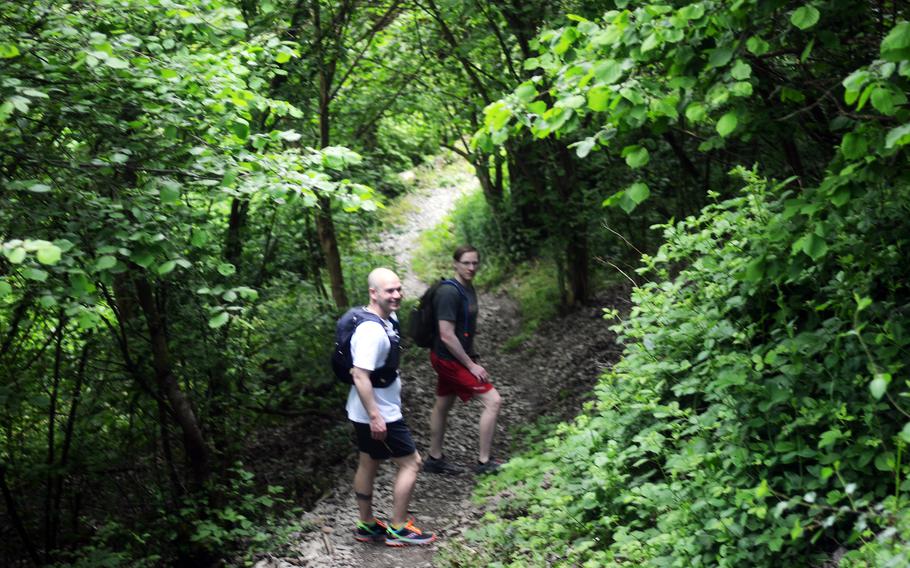 Buy Photo
Joshua Seaman and Matthew McNeil, U.S. soldiers based in Germany, hike down part of the RheinBurgenWeg near Bad Salzig, Germany, June 5, 2021. The trail stretches 120 miles along the Rhine River but can be tackled in shorter stages. (David Edge/Stars and Stripes) 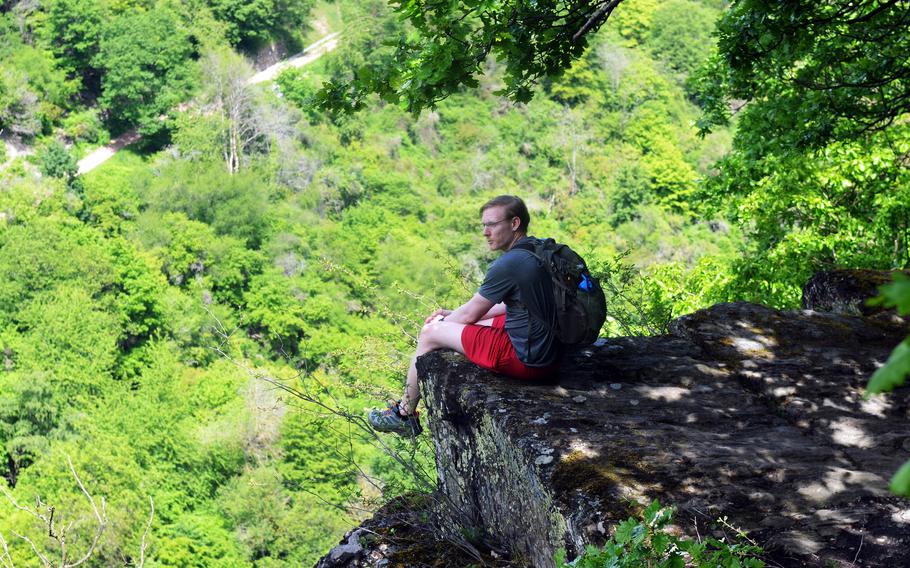 Buy Photo
Joshua Seaman, a U.S. soldier based in Wiesbaden, Germany, sits on a cliff on the RheinBurgenWeg hiking trail near the town of Bad Salzig, June 5, 2021. (David Edge/Stars and Stripes)

At this point, the path turned into mud and stones.

We trekked up to the top of the first of many cliffs, where we were rewarded by stunning views of the Rhine Valley and Bad Salzig.

After taking in the panorama, we continued up and down the hills and cliffs, passing many brooks and small waterfalls. The many rest stops with benches along the trail allowed us to pause and enjoy the outdoors and scenery.

It was right after the waterfalls that we encountered a dangerous climb. The path looked like a goat trail to me, with a sheer cliff on the left side. The footing was very slippery as we climbed up almost 100 feet. For the first time, I felt a little uncomfortable, and sure enough, I slipped and fell. I was okay, but it made an impression.

I was about five miles into the hike and about halfway up the cliff, and was having a hard time catching my breath. When I finally got to the top, I was exhausted, my leg muscles were aching and I began doubting my ability to finish the hike.

I made it, but the lesson learned is that this part of the RheinBurgenWeg trail isn’t an easy Sunday stroll. It shouldn’t be underestimated, but if you prepare and take safety precautions, it’s well worth the effort. 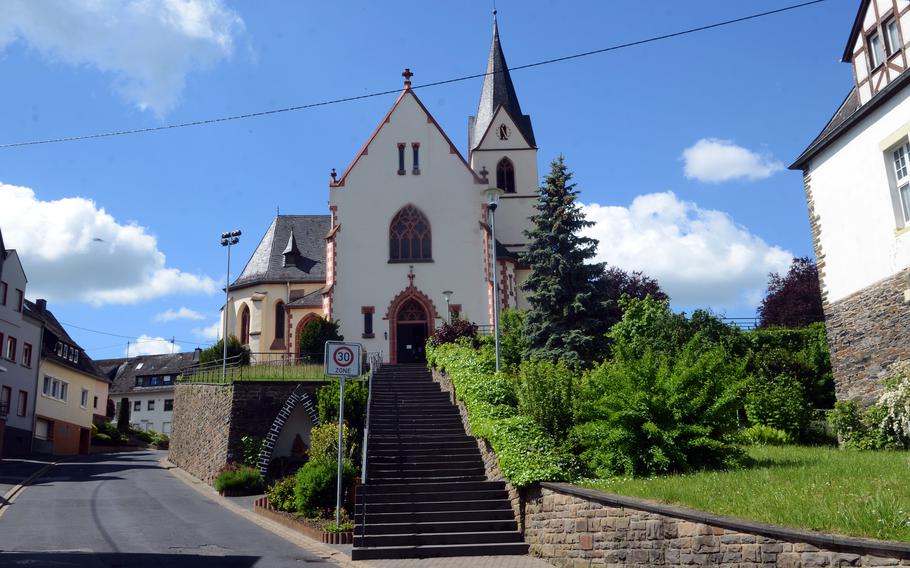 Buy Photo
An 18th century church in the town of Bad Salzig, Germany, June 5, 2021. The RheinBurgenWeg, or Rhine Castles Trail, can be picked up in the town on the left side of the storied river. (David Edge/Stars and Stripes)

Information: Many of the towns the trail passes through can be reached by train or car. The RheinBurgenWeg website, www.rheinburgenweg.com, suggests stages to break up the trail into shorter distances and has information about accommodation, restaurants and guided tours.