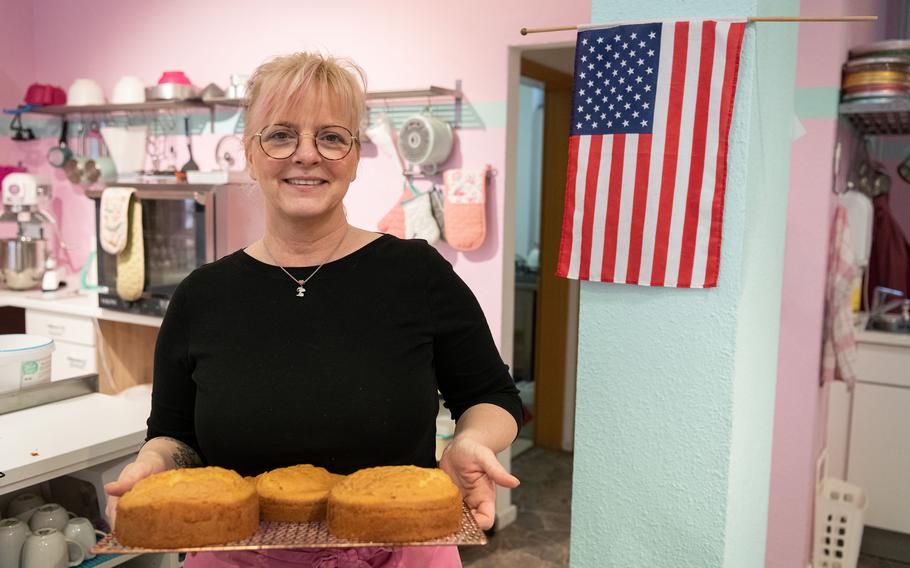 Four decades ago, Claudia Ramsey’s father, a former U.S. Army captain, gave her an American flag, which today hangs behind the till at her bakery, K-Town Cupcakes, in downtown Kaiserslautern.

Despite being one of few decorations there that isn’t pink, the flag blends in surprisingly well and feels appropriate, as Ramsey started the business six years ago, largely to cater to the area’s sizable American military community.

“The initial idea was to make cupcakes like in America for the Americans stationed here,” said Ramsey, whose father met her German mother while stationed in Kaiserslautern in the 1960s.

The trained baker lived in the U.S. for a few years as a child but returned to Kaiserslautern with her mother after her parents divorced. 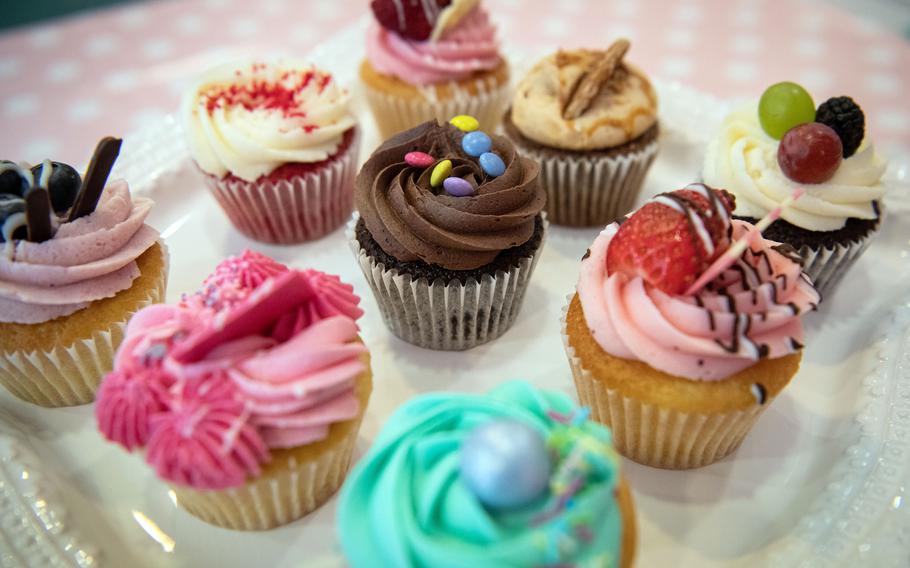 About a dozen different flavors of cupcakes are sold at K-Town Cupcakes, in Kaiserslautern, Germany, on any given day. (Phillip Walter Wellman/Stars and Stripes)

She now spends most days at the small bakery on Richard Wagner Strasse, where she arrives before or near sunrise, depending on the time of year, to start baking fresh products before the doors open.

“People often say it must be nice to work at a place that opens so late, but they don’t realize that we arrive much earlier, and we’re constantly busy,” Ramsey said, referring to her sole co-worker and herself.

Together they fill a large display case, which is one of the first things visitors see upon arrival. There are usually about a dozen types of cupcakes inside, each topped with homemade buttercream or cream cheese frosting.

Many of them have their flavors infused into the cake and frosting, and include a corresponding garnish.

The strawberry cupcake, for example, is made with real fruit blended into both the cake batter and frosting, and topped with a fresh strawberry.

Strawberry, chocolate, vanilla, blueberry and red velvet are available daily. Other flavors, such as Oreo, bubble gum, banana and caramel, are offered on a rotating basis. 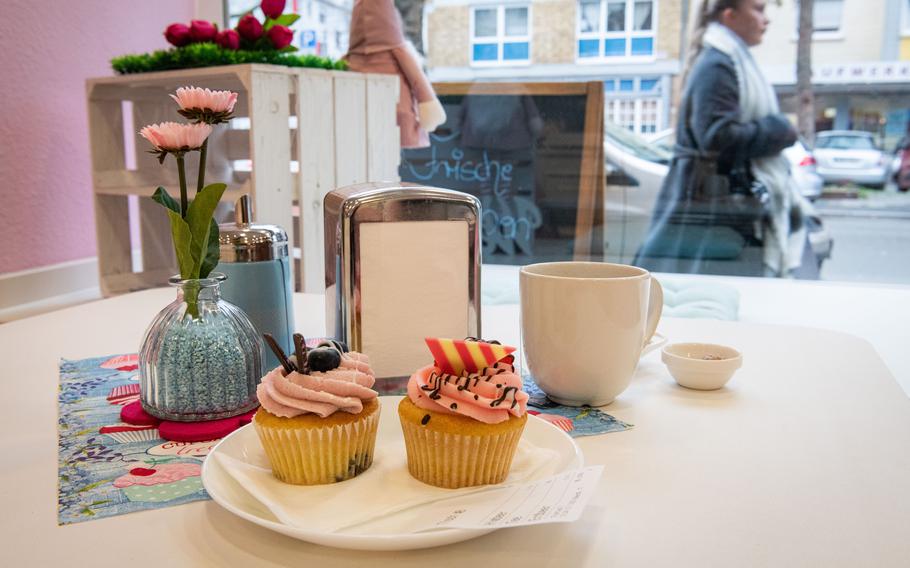 K-Town Cupcakes, in Kaiserslautern, Germany, sells cupcakes and other desserts, along with various coffees and teas. (Phillip Walter Wellman/Stars and Stripes)

While Ramsey’s aim is to make cupcakes likes those commonly sold in the U.S., she said some customers have noticed differences.

“Two days ago, a man was here and said: ‘We love your cupcakes because they’re not so sweet like in America. Here you can taste the different flavors,’” she recalled.

That was also the consensus among Stars and Stripes staff, who recently tried several cupcakes and agreed that they were American in style but not as “sickly sweet” as some of those stateside.

They also were light in texture and almost dissolved in the mouth. A day after purchase, the remaining cupcakes had only a marginal decrease in quality. 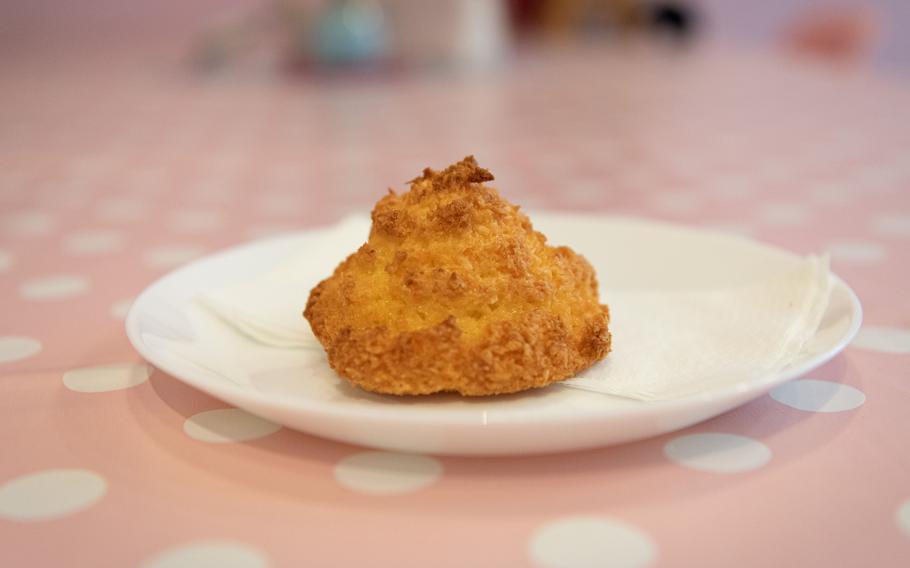 K-Town Cupcakes also sells large coconut macaroons. Once common at bakeries in the region but now difficult to find, they are popular among the bakery’s older German clientele, according to Ramsey.

Also available are assorted macarons. The delicate texture amazed me, but they were too sweet for my tastes. They might go better with a hot drink.

Homemade oatmeal cream pies are another offering. They reminded me of the Little Debbie version being phased out at U.S. military bases, but the ones at K-Town Cupcakes have more texture and flavor.

Eating the bakery’s products on the premises suffuse the experience with added charm. Pink-and-white polka-dotted tablecloths and flamingo figurines are among the decor.

In winter, they contrast with the often gray skies outside the large windows. Various coffees and teas may be ordered to accompany the desserts.

Customers who want a cupcake flavor that has already sold out during the day can request that it be made anytime up until around closing. Gluten-free varieties and vegan cupcakes made with banana also are available.

“I tell people all the time that they have to come in. It’s a pretty place and it always smells good,” Ramsey’s co-worker, Ilona Riffel, said while making a new batch of frosting. “And the coffee is good, too.” 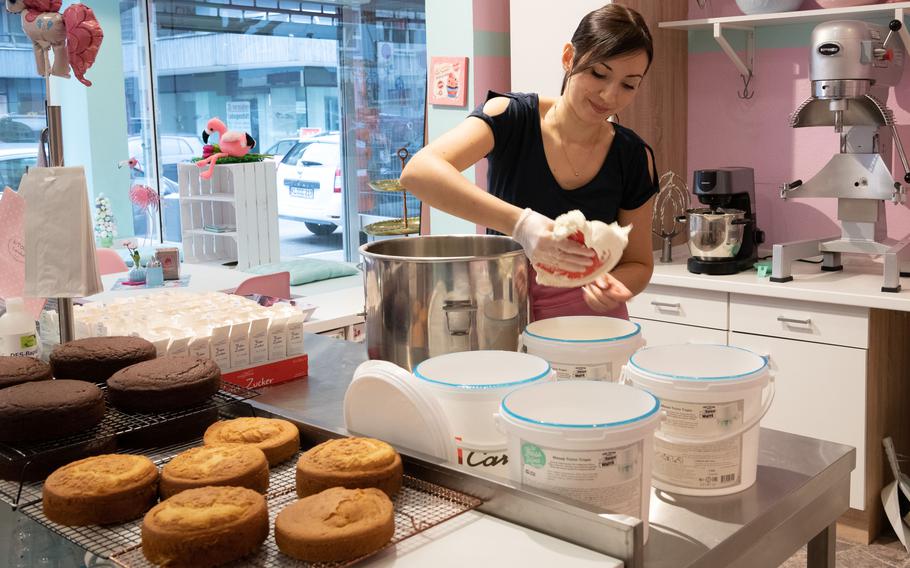 But most customers leave after buying their baked goods. This has especially been the case in recent years, as the bakery’s business has shifted from predominantly cupcakes to 8-inch round cakes, which come in chocolate, vanilla, red velvet and mixed flavors.

“When we started, it was just cupcakes, but then we realized that making cakes would help us stay in business,” Ramsey said.

And business is booming.

Ramsey and Riffel can make only five or six full-size cakes a day. Customers who want a cake for a weekend event need to visit the bakery at least three weeks in advance to discuss designs.

Those who want a cake for a weekday often can order it a week or two in advance, depending on the number of existing orders. 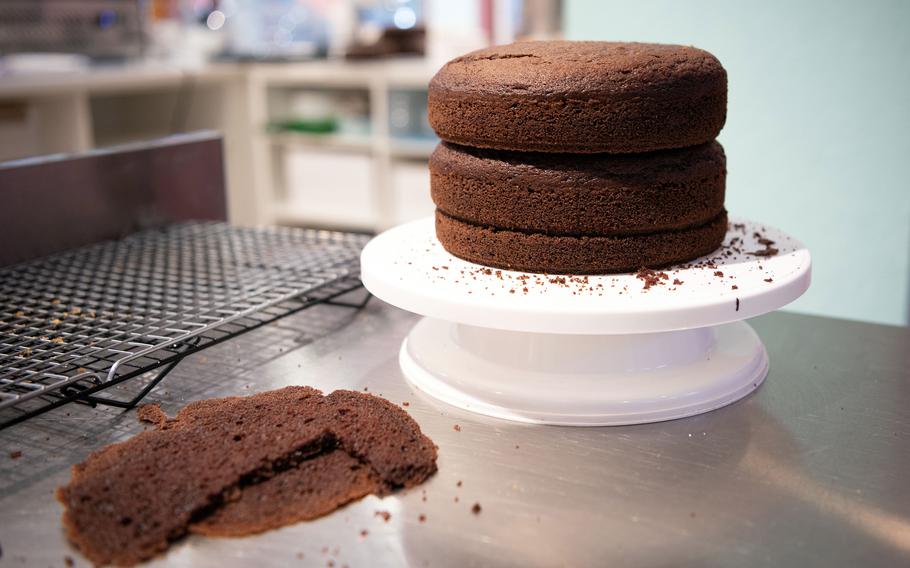 An eight-inch round cake at K-Town Cupcakes, in Kaiserslautern, Germany, before being frosted. A one-layer cake consists of three cake pieces. (Phillip Walter Wellman/Stars and Stripes)

Full-size cakes are made with the same ingredients as the cupcakes. Past designs can be found on the bakery’s Instagram account, @k_town_cupcakes.

Ramsey said that an increasing number of Germans have been coming to the bakery for wedding cakes but that Americans make up an estimated 70% of the clientele.

They often order cakes for birthdays, retirements or promotions, sometimes asking for designs incorporating the American flag, like the one behind the till, which her father gave her during a visit to Kaiserslautern after he and her mother divorced.

“A few weeks ago, a customer came in and asked why I had the flag hanging up,” Ramsey said. “I put it up because it’s my flag and it’s my bakery. And because I’m American and I’m proud of it.” 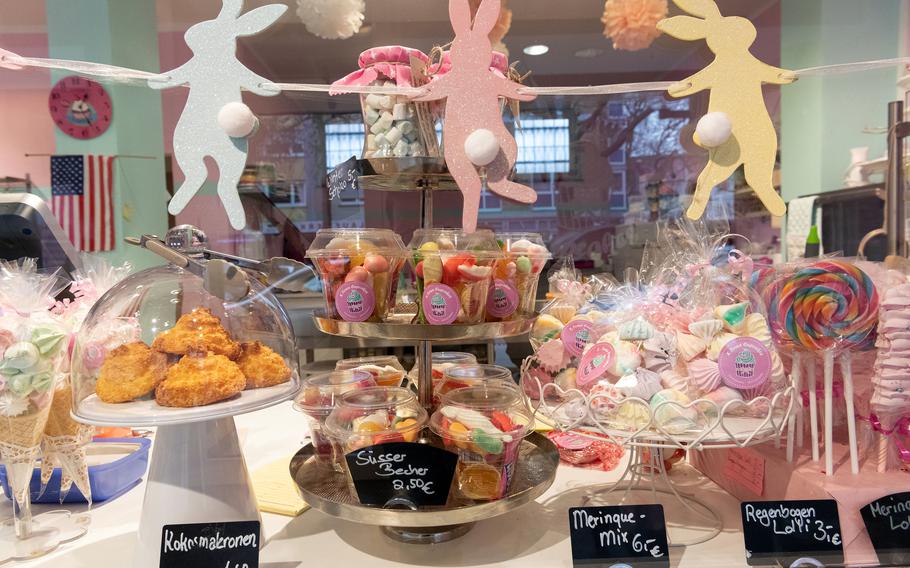 Ilona Riffel’s last name was spelled incorrectly in the original version of this story.