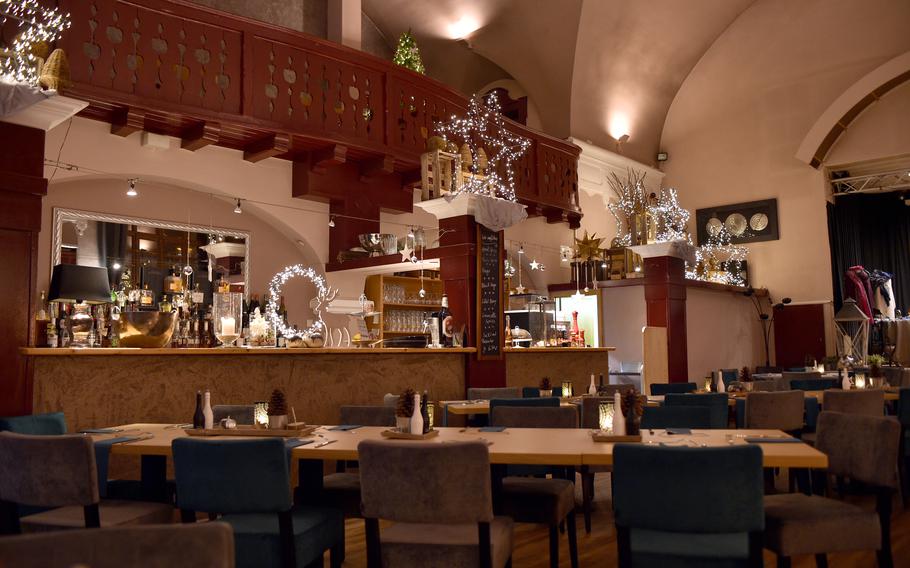 The Restaurant MAX in Winnweiler, Germany, is open Thursday through Sunday from 5:30 p.m. until 11 p.m. It also has lunch hours from 12 p.m. to 2 p.m. on Sunday. (Matt Wagner/Stars and Stripes)

One of the many things I have in common with my father is a particular palate. Both of us are picky eaters.

When I moved close to Kaiserslautern, Germany, in September, my dad drew on the knowledge of the surrounding area he gained during his military career and told me I could get a good steak in the town of Winnweiler.

But he couldn’t remember the name of the restaurant he had in mind. After a quick Google search, I settled on Restaurant MAX, which had garnered high ratings in both English and German.

I don’t know if it’s the restaurant from my father’s memory, but my choice did not disappoint.

Located in a former gym right next to the Jewish Museum of the North Pfalz, Restaurant MAX offers mostly traditional German dishes like cheese spaetzle and numerous versions of schnitzel. 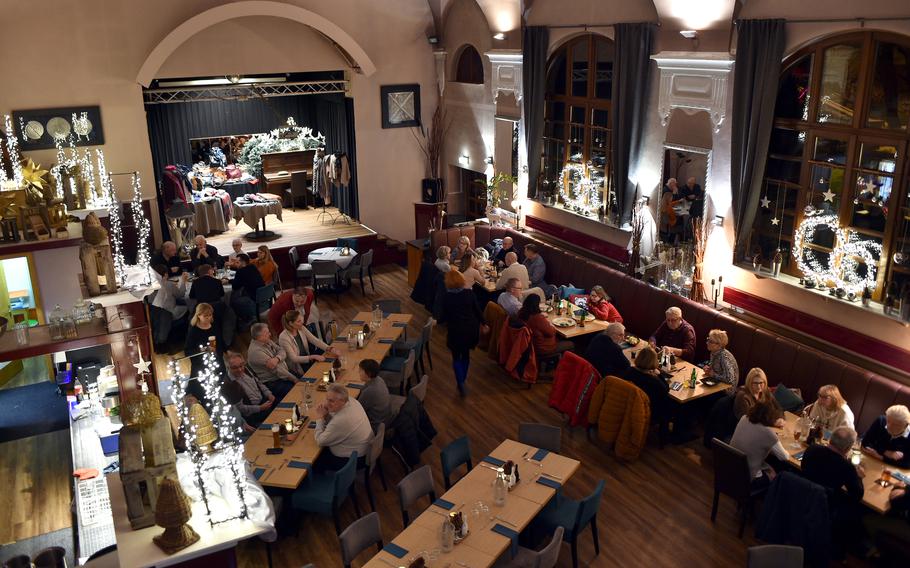 The first floor of Restaurant MAX in Winnweiler, Germany, is decked out for the holidays on Dec. 17, 2022. The restaurant opened in 1990 in a former gym and lies next to the Jewish Museum of the North Pfalz. (Matt Wagner/Stars and Stripes)

It also has a few Italian options like a mozzarella, tomato and pesto appetizer and a pair of spaghetti meals.

What caught my attention was the steak, which I hadn’t eaten in a while, and my father’s story persuaded me to give it a shot.

I ordered the rump steak with mushrooms and a homemade butter, and on the side came a salad and fries, one of five potato sides available with the dish. 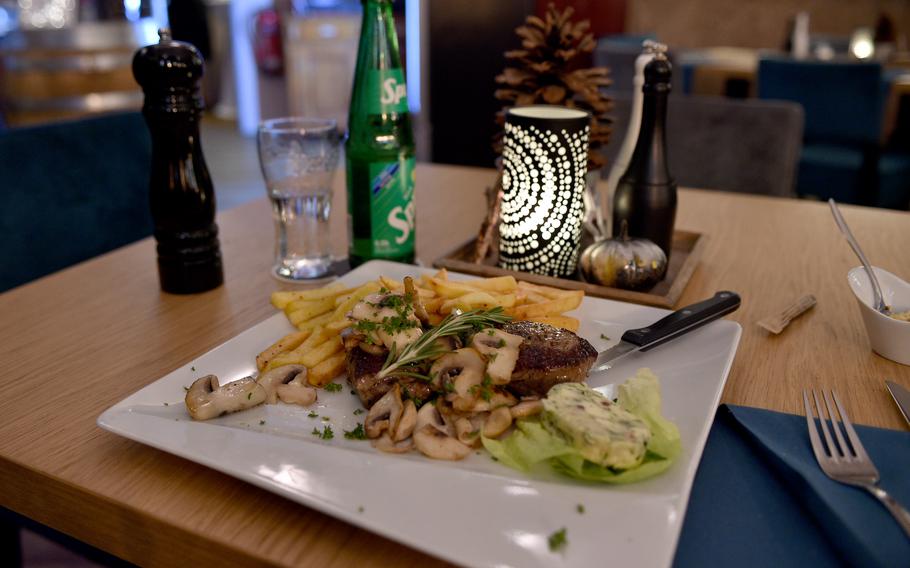 The rump steak at Restaurant MAX in Winnweiler, Germany, comes in four options: "Pfaelzer" style with roasted onions, with homemade herb butter, with mushrooms and herb butter, and with the herb butter and grilled vegetables. The beef is from Argentina. (Matt Wagner/Stars and Stripes)

While the thoroughness of cooked steaks can be an adventure in Germany, Restaurant MAX cooked mine medium, as ordered.

My father would have enjoyed the pepper on top of the meat, although he probably still would have added more. To top it off, the melted butter added so much flavor that I didn’t miss any steak sauce.

The worst part of the meal was the mushrooms’ lack of taste. I fixed that problem by mixing in the leftover butter.

The salad came the way it normally does in Germany: with all the ingredients separated. As someone who doesn’t like onions and tomatoes, I appreciated that I didn’t have to perform surgery to remove those items from the dish.

Also, the little slices of radishes were a nice touch and didn’t take over the salad with their harsh, crisp bitterness. 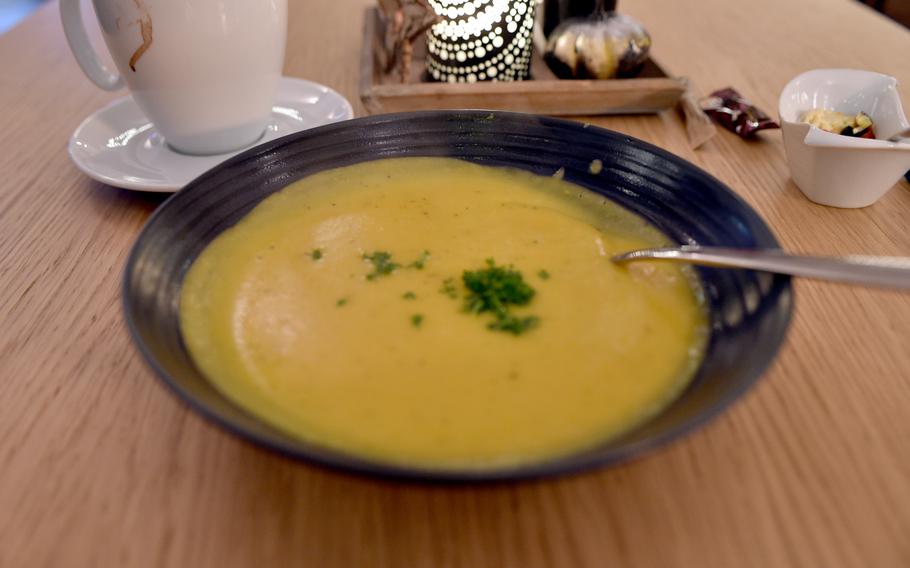 The sweet potato cream soup was a daily special for Dec. 17, 2022, at the Restaurant MAX in Winnweiler, Germany. It hit the right spot on a cold, dreary evening. (Matt Wagner/Stars and Stripes)

Before the steak arrived, I had a sweet potato cream soup that was on the daily menu for a mid-December Saturday. It hit the spot on a very chilly evening. I am not sure whether the cooks are considering adding it to the main menu, but I would recommend that wholeheartedly.

For dessert, I stayed away from the traditional apple strudel that I normally choose this time of year, even though I did want it.

MAX has two French delicacies: crepes with a chocolate mousse and a chocolate souffle in a fruit sauce with whipped cream and ice cream. I went for the latter option. 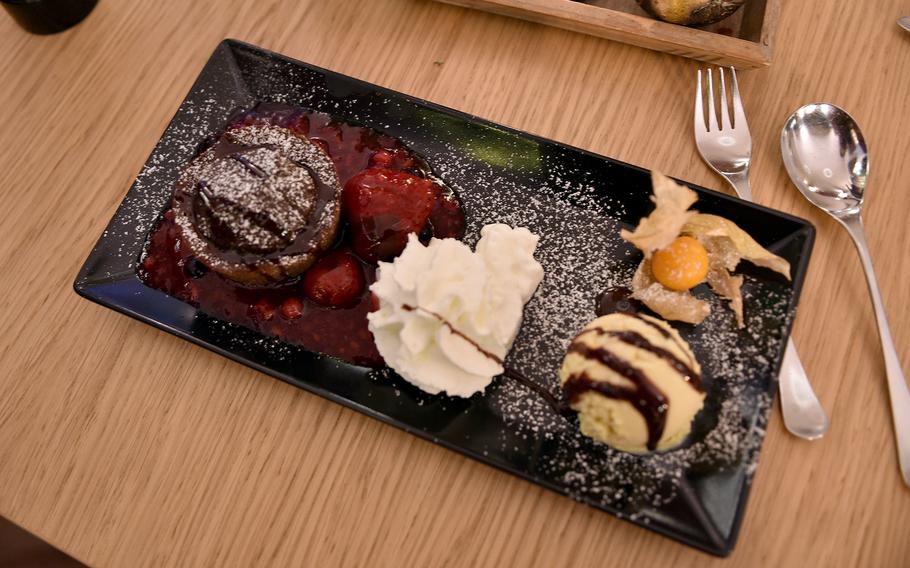 The chocolate souffle is one of the many dessert items available at Restaurant MAX in Winnweiler, Germany. It comes with a fruit sauce, whipped cream and a scoop of ice cream. (Matt Wagner/Stars and Stripes)

Once again, it was a great choice. The fruit sauce and souffle mixed well together, with neither being overpowering. The sauce consisted of bits of strawberries, cherries, blueberries and some small, red berries that I didn’t recognize, but that my colleagues say probably were currants.

According to the menu, the ice cream is supposed to be vanilla, but the scoop served to me was light brown and tasted like hazelnut, which I enjoyed immensely.

Overall, it was a great meal.

The restaurant has plenty of space to accommodate groups of any size, including outdoor seating and two levels indoors.

As a party of one, I stuck out like a sore thumb. So next time, I plan to look for other people to bring along. If my parents do visit, I will take my dad to Restaurant MAX to see if it’s the eatery he remembers.

If not, we’ll just create a new memory at a great place. 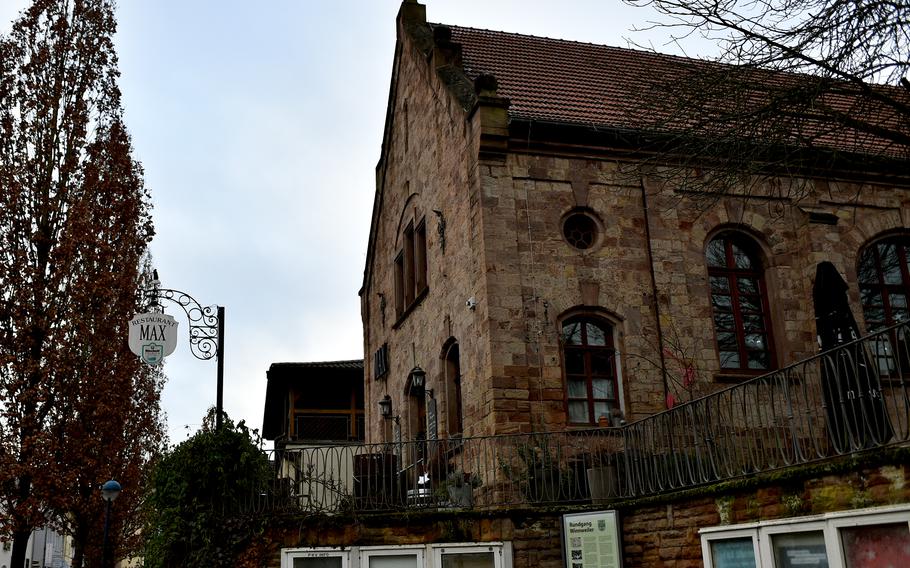 Restaurant MAX in Winnweiler, Germany, is housed in a building that was at different times a gym, a movie theater and a disco. (Matt Wagner/Stars and Stripes)

Prices: Starting at 5.90 euros for an appetizer to 25 euros for the most expensive steak meal. Cash and credit cards are accepted.

Menu: Available in both English and German