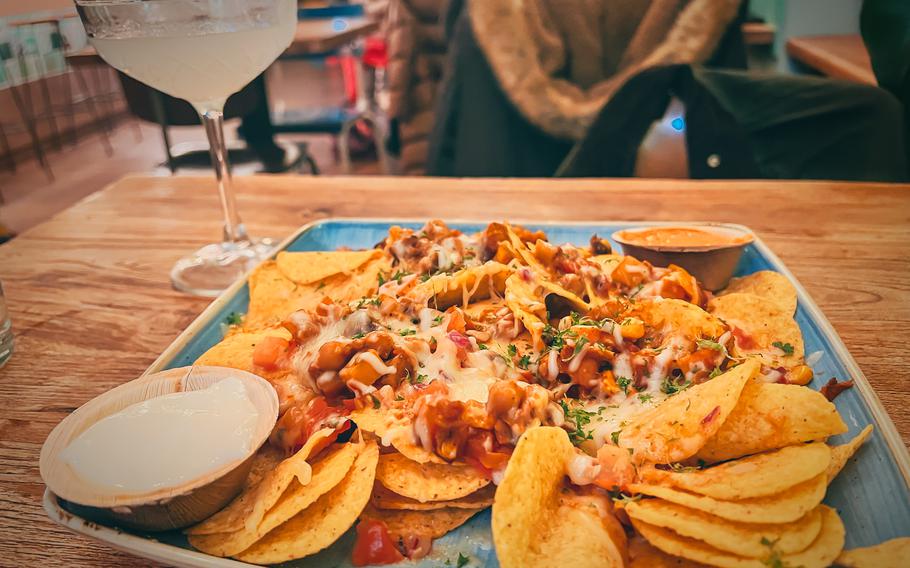 The nacho plate with chili sin carne at El Burro Restaurant and Bar on Nov. 20, 2022, in Mainz, Germany. The warm corn chips are also offered with black beans, chili or chicken and beef toppings. (Alexander Riedel/Stars and Stripes)

Since “south-of-the-border” food in Germany means Wiener schnitzel and Swiss chocolate, it should come as no surprise that truly great Mexican fare is difficult to find here.

So difficult, in fact, that Christian Pulisic of the U.S. men’s soccer team once claimed to have driven three hours just to visit the nearest Chipotle when he played professionally in Dortmund.

Quality Mexican cuisine had eluded my wife and me since our move to the Kaiserslautern Military Community. That is, until we came across El Burro Mexican Kitchen on a recent outing to Mainz.

The mid-sized restaurant is in the heart of the historic city core, steps from the landmark sandstone cathedral and the Gutenberg Museum, home to some of the world’s first printed books.

The restaurant offers a rugged, modern chic look, accented with tasteful lighting and decor without any off-color kitsch. 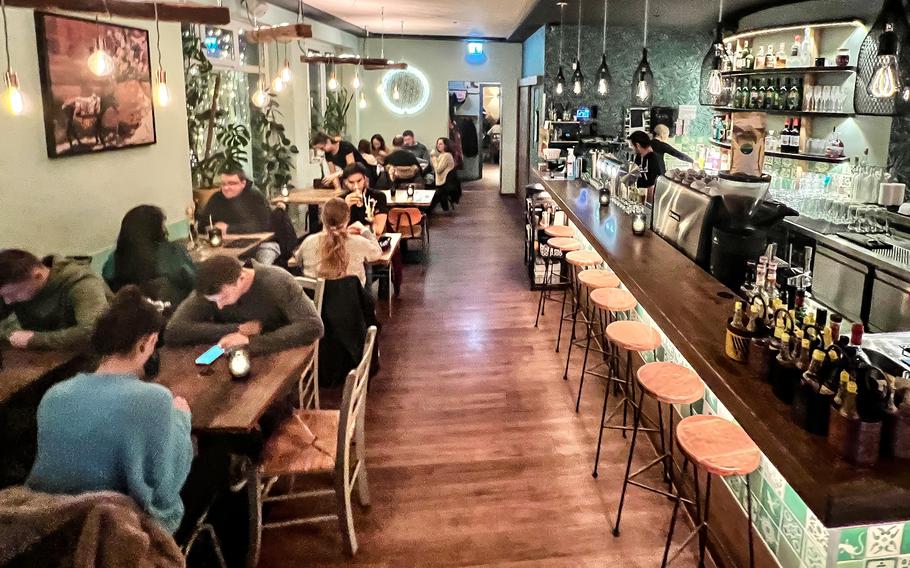 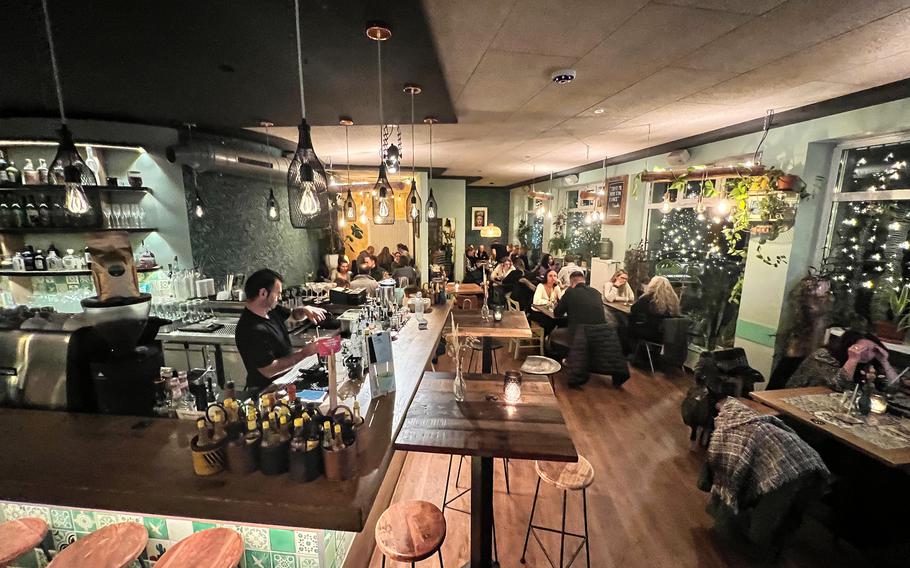 The bar area at El Burro on Nov. 20, 2022, in Mainz, Germany. The restaurant offers happy hour drink specials after 5 p.m. weekdays and 9 p.m. on Saturday. (Alexander Riedel/Stars and Stripes) 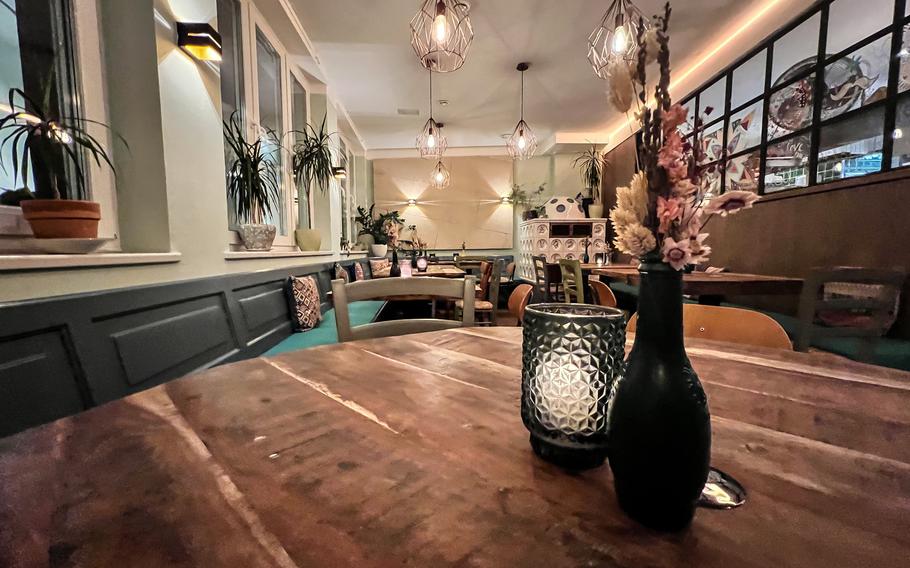 Additional seating in the back of El Burro Restaurant and Bar in Mainz, Germany, is suitable for small groups and celebrations. The restaurant features a large menu of Mexican-Californian street food specialties in the heart of the historic city center. (Alexander Riedel/Stars and Stripes) 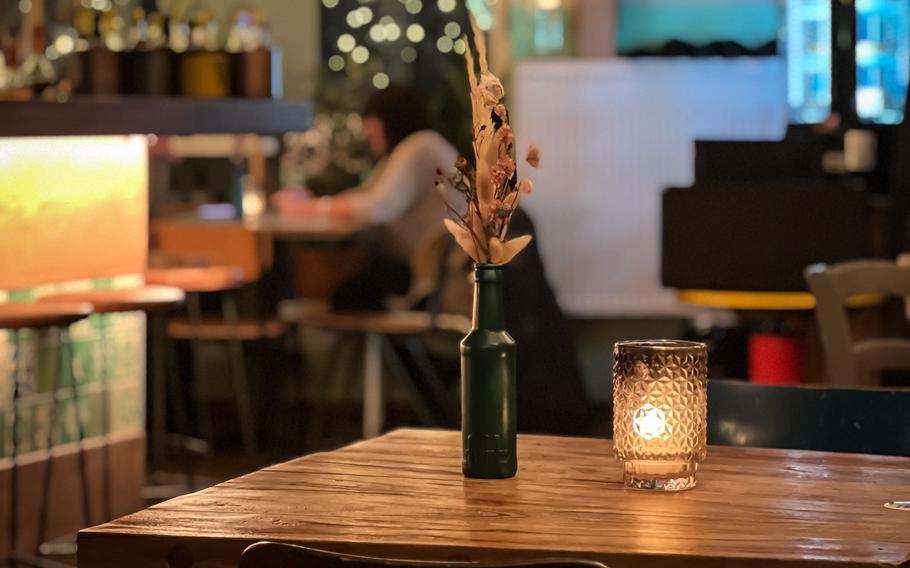 El Burro Restaurant and Bar in Mainz, Germany, offers a wide variety of Mexican-Californian street food specialties in the heart of the historic city center. The atmosphere in the mid-sized restaurant is casual and the full bar invites visitors to stay long after dinner. (Alexander Riedel/Stars and Stripes) 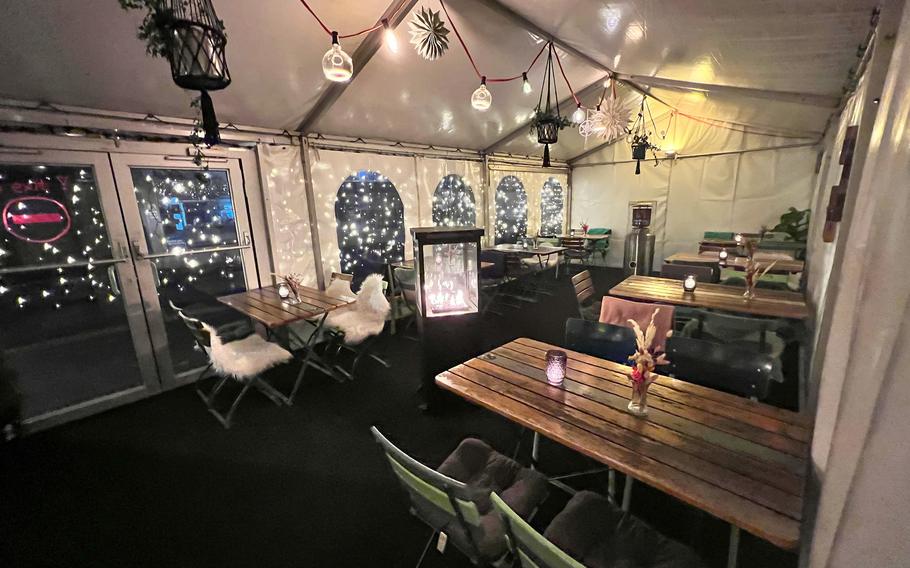 Heated and covered outdoor seating bridges the cold winter months at El Burro Restaurant and Bar on Nov. 20, 2022, in Mainz, Germany. During the summer months, the restaurant offers relaxed beach chair seating on a calm side street downtown. (Alexander Riedel/Stars and Stripes)

Although we arrived spontaneously without a reservation, we were quickly seated next to a large window. The restaurant began to fill up during the later evening hours with Mainz State Theater patrons looking to grab dinner before the show.

Instead of paper menus, which are available upon request, we used the English online menu, accessed via QR code. Choices include familiar classics from enchiladas and chimichangas to geographically extended offerings such as tapas and Argentine rump steaks.

In addition to the meat-lovers favorites, the restaurant surprised us with a wide selection of vegetarian, vegan and even gluten-free options and alternatives for nearly all menu items.

Coming in from a cold, cloudy day, we started off with a plate of warm nachos topped with mildly spiced chili sin carne, a delightful meatless alternative to the classic chili con carne, which is also available.

Drink options include such obvious staples as Mexican and German brews, but also local Rhine-Hessian wines. And since El Burro also offers a full bar, the menu features beverage-specific happy hours. Mojito Monday, Margarita Mittwochs and daiquiri Donnerstags are some of the examples. 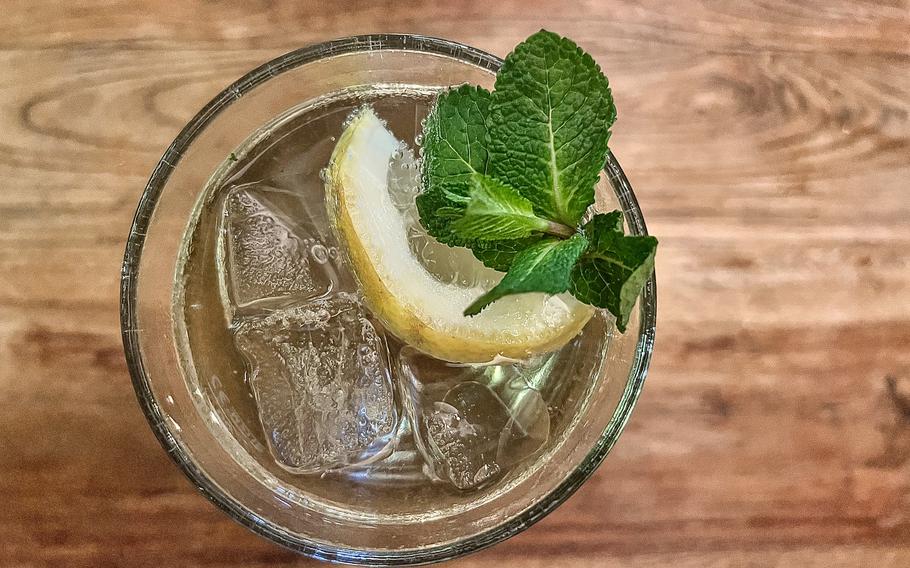 The elderflower spritzer at El Burro Restaurant and Bar in Mainz, Germany. The restaurant also features a menu of alcoholic and nonalcoholic cocktails, such as an Ipanema with lime, brown sugar and ginger ale. (Alexander Riedel/Stars and Stripes)

My wife paired the appetizer with a margarita that was discounted in price but not flavor. As the designated driver, I went for the elderflower spritzer and later ordered two more glasses of the simple yet refreshing concoction.

As a main dish, my wife landed on the los tacos plate, with savory shredded barbacoa beef topped with creamy black bean puree, pico de gallo and some of the best house-made guacamole this side of the Rhine. The taco plate with beef barbacoa at El Burro Restaurant and Bar on Nov. 20, 2022, in Mainz, Germany. Tacos are also offered with classic selections of chicken and chili con carne, along with meatless options. (Alexander Riedel/Stars and Stripes)

The best part of the dish, however, was likely the homemade corn tortillas, which incorporate a method known as the nixtamal procedure. Based on the practices carried on from ancient Mesoamericans, it involves cooking and steeping kernels overnight, according to a traditional recipe.

This softens the outer hulls so they can be easily ground into soft dough, maintaining the corn’s nutritional value.

As a longtime vegetarian, I was excited to try the vegetarian chicken burrito. The dish’s meat substitute is listed on the menu as Planted, the brand name of a chicken replacement product made from pea protein.

I don’t usually go for the increasingly popular meatless products and was worried whether my selection had ruined my dinner. Instead, I was surprised with a pleasantly seasoned blend of flavors and textures that, while not convincingly meaty, is likely to suit most palates. 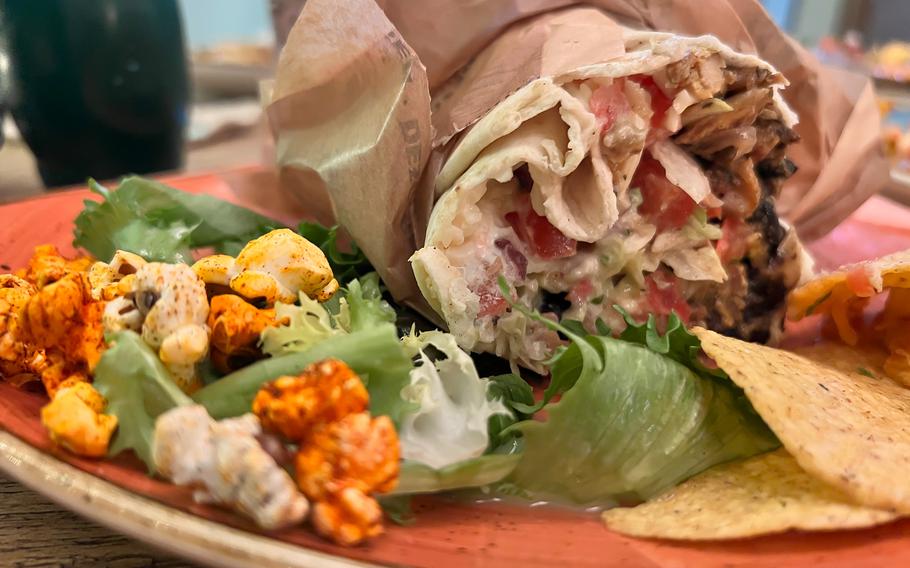 The vegetarian street food burrito at El Burro Restaurant and Bar in Mainz, Germany, comes with seasoned popcorn and corn chips. The vegetarian version of the dish comes either with grilled vegetables or Planted "chicken" made of pea protein. (Alexander Riedel/Stars and Stripes)

I also ordered the admittedly weird combo of sweet potato fries with a side of perfectly tangy homemade chipotle mayonnaise, which would also go well with any of the offered meat dishes. 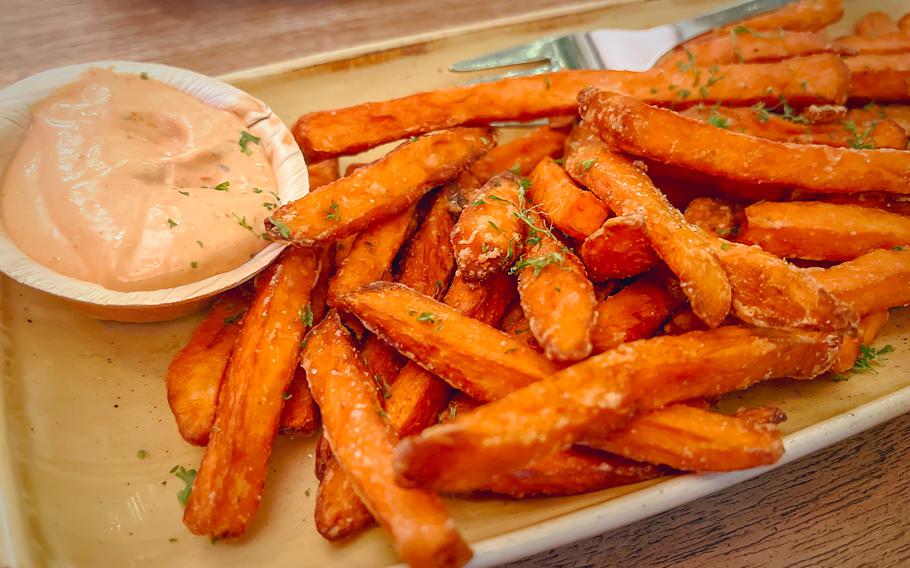 The portions were generous and very nearly prevented us from moving on to the dessert menu. Among its enticements are churros with homemade chocolate sauce, chimichanga dulce and a changing selection of cakes.

I couldn’t say no, however, to a decidedly more American choice, the brownie caliente with vanilla ice cream to close out the meal. 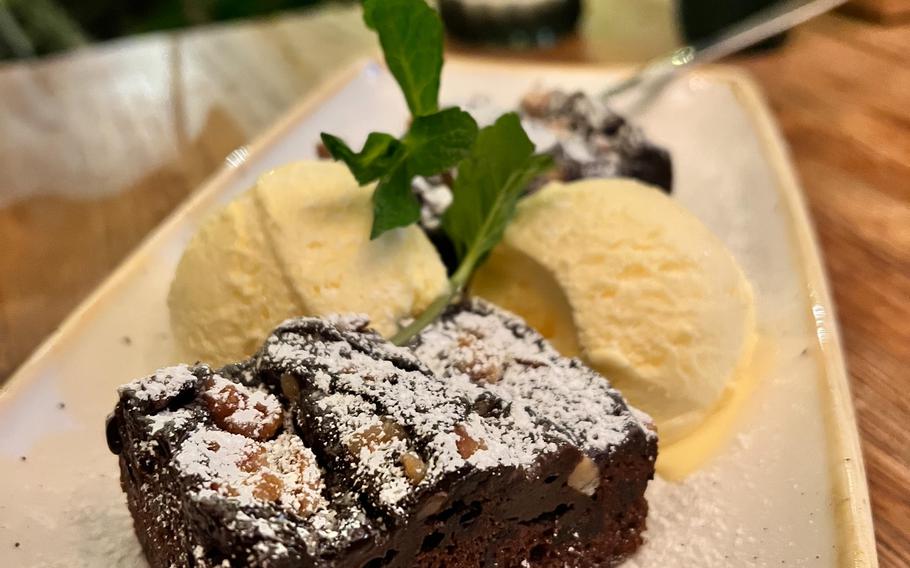 El Burro is not only a trendy watering hole in central Mainz, but also a veritable oasis for those looking for Mexican comfort foods. Whether from near or far, this burro is worth the ride.

Address: Dominikanerstrasse 2, 55116 Mainz. There is limited street parking along Grosse Langgasse next to the restaurant. Parkhaus Kronenberger Hof and Weissliliengasse are also nearby. The restaurant is also within walking distance from the main train station.

Prices: Appetizers start at 6.10 euros. Entrees start at 10.80 euros and go up to 28.50 euros for the rump steak. A children’s menu is also available. Drinks include local beer on tap at 4.10 euros, soft drinks starting at 4 euros and homemade lemonades and iced teas starting at 4.60 euros.