Wallis 46 brings Swiss fare and a hellacious burger to Kaiserslautern 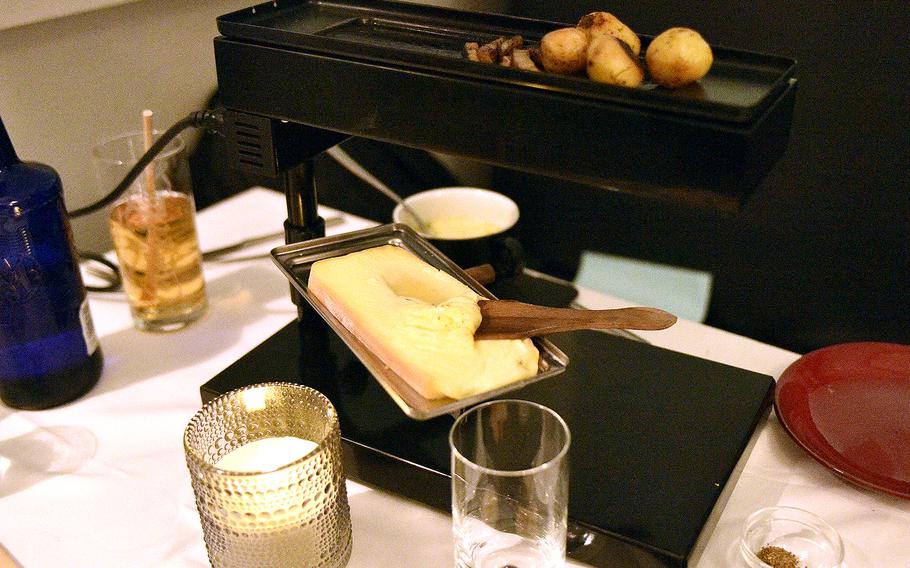 The Walliser raclette at Wallis 46 gives customers a do-it-yourself grill. The tray with the block of cheese, middle, goes below, while the vegetables sit on top. Once the cheese is melted, customers scrape off the top onto a plate, where the vegetables and seasonings are. (Matt Wagner/Stars and Stripes)

The Kaiserslautern restaurant Wallis 46 derives its name from the German word for the Swiss canton of Valais, the southern region famous for the Matterhorn.

Just like the Matterhorn, this place is one of a kind. Situated at Parkstrasse 46, it can boast of being the only Swiss restaurant in town. 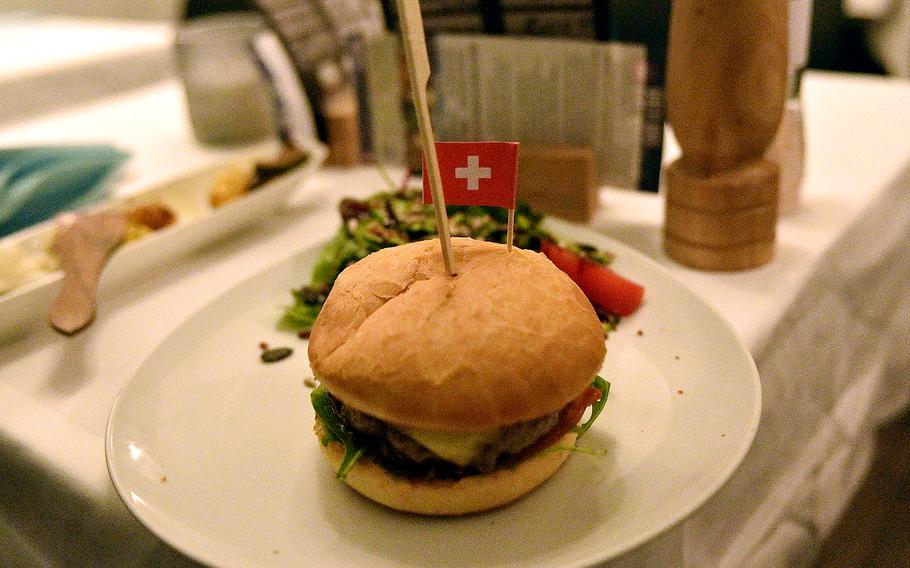 The Teufelsburger at Wallis 46 normally includes a red bun with the crest for the 1.FC Kaiserslautern soccer team branded on it. This version has a regular bun, however. (Matt Wagner/Stars and Stripes) 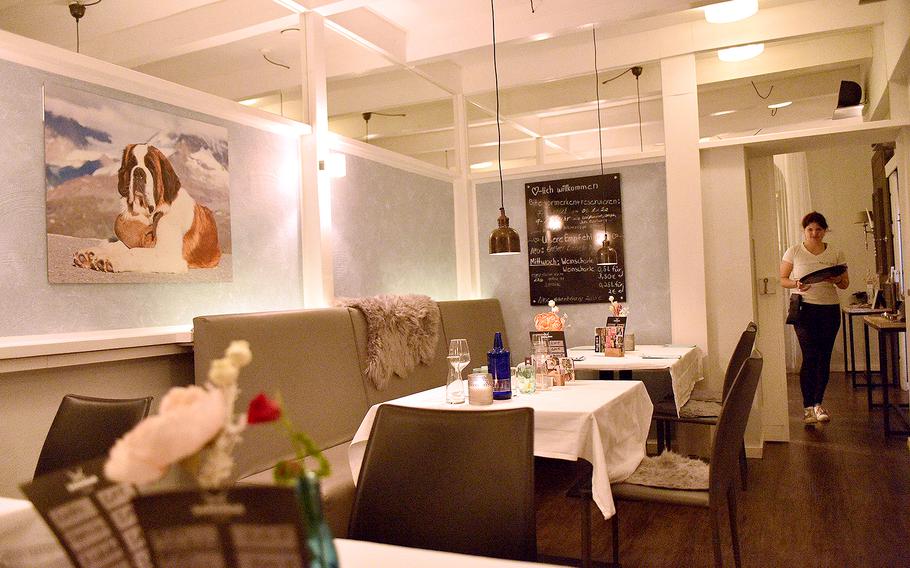 Wallis 46, whose interior is seen here, seats 65 people, according to its website. (Matt Wagner/Stars and Stripes) 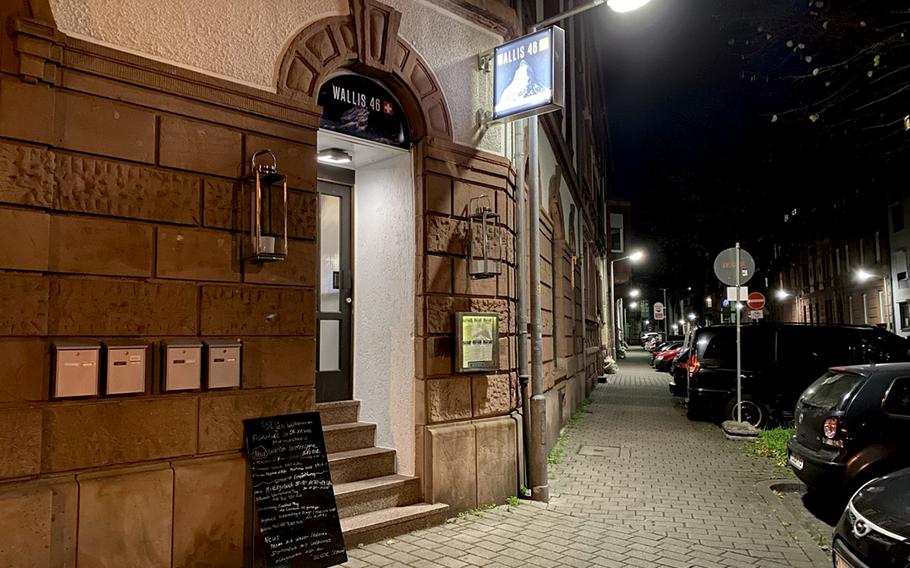 Wallis 46, which opened in June on Parkstrasse in Kaiserslautern, Germany, offers Swiss food and a few local items. (Matt Wagner/Stars and Stripes)

Almost every menu item aside from desserts has the dairy product in it, including its two soups, Chaessuppe (Swiss cheese soup) and Walliser Brotsuppe (bread soup from the Wallis region), the latter of which is made with gruyere.

This can only be good heading into the winter months. Combined with warm drinks like coffee, tea and hot chocolate, Wallis 46 has whatever you need to get through the cold doldrums of the season.

Many menu items have vegan versions, including the soups, Walliser “cheese” toast and flammkuchen. There’s even a vegan currywurst.

Among the decidedly nonvegan options is the Walliser raclette, which comes in a classic and an optional form. The raclette involves a grill brought to the table.

It has one tray below for a large block of Appenzeller cheese and one above for carrots, onions, pickles, peperoncino and baby corn.

When the cheese below melts, you drop the tray and tilt it, and you use a butter knife to scrape the bubbling top onto the plate. There you mix the cheese with the grilled vegetables and a dash of seasoning.

I ordered the classic, and the result was an explosion of cheesy goodness — and a mess if you are not careful.

The Swiss cheese soup I ordered was watery, but dipping bread in it soaked up the liquid and brought the cheese taste to the forefront. There’s also a fondue consisting of Appenzeller, gruyere and Emmentaler cheeses.

But Wallis 46’s cuisine extends beyond Swiss dishes. It offers four kinds of flammkuchen: Elsaesser, Walliser, vegetarian and fish. A colleague tried No. 3 on that last.

The dough on the vegetarian flammkuchen was baked with the right combination of crispiness and softness, he said.

The major local item on the menu might be Wallis 46’s most daring. The Teufelsburger pays homage to the soccer team 1. FC Kaiserslautern.

The club’s crest normally is branded on a red bun, and the burger includes onions, cheese, tomato and a plum barbecue sauce. It is served with a salad and the choice of walnut, hazelnut or raspberry dressing.

Wallis 46 didn’t have the Rote Teufeln, or Red Devils, buns available during my visit, but the taste of the burger more than made up for that disappointment. The plum gave the barbecue sauce a fruity flavor that complemented the meat and cheese well.

During 1. FCK home matches, the restaurant offers the burger at a discounted price of 7.50 euros without the salad. Its normal price is 10.50 euros. I highly recommend it.

Although Wallis 46 entered the scene just a few months ago, based on the food and the friendly service, it could be here for the long haul.