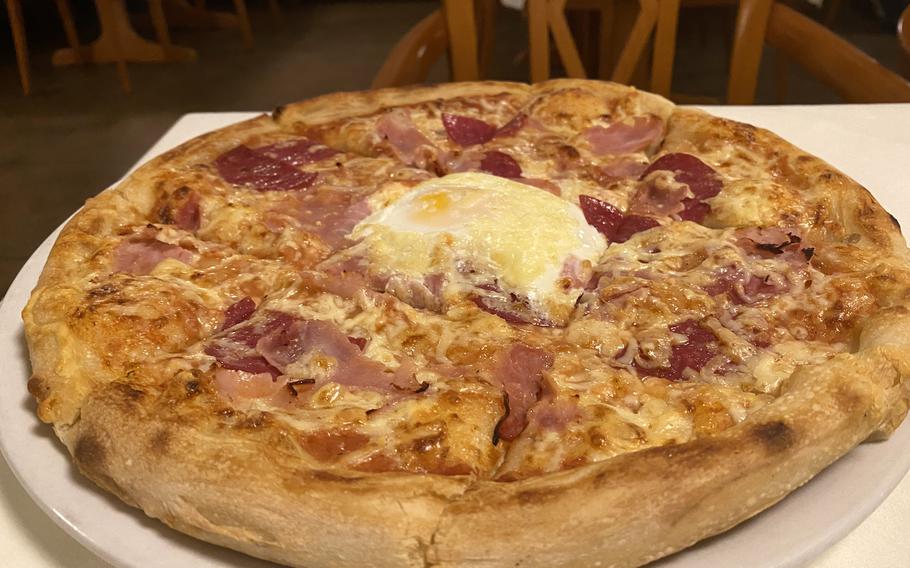 The gallo d’oro pizza at Pizzeria Antonio in Sulzbach-Rosenberg, Germany, features an egg on top. (Michael Slavin/Stars and Stripes)

Hunting for a restaurant when your belly is rumbling is generally not conducive to success, but my fortunate find of Pizzeria Antonio in Sulzbach-Rosenberg, Germany, stoked a real sense of reward.

It appears to be an apartment building nestled into the back of a soccer venue, Aicher Stadium. Its unpromising exterior, however, conceals a treasure trove of Bavarian goodness.

The cozy atmosphere made me feel as if I had stumbled into a German household that just happened to be serving pizza. The tables are set up for parties of four, so as a solo diner, I received a couple of odd looks. 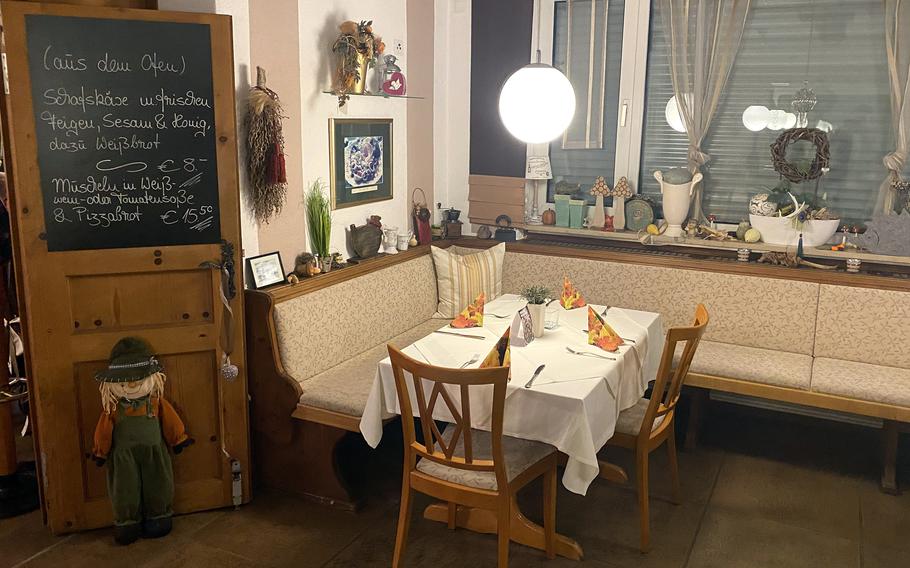 The interior of Pizzeria Antonio in Sulzbach-Rosenberg. The eatery is within driving distance of Vilseck and offers pizza, pasta and other Italian dishes. The board at left announces daily specials. (Michael Slavin/Stars and Stripes)

But after the initial surprise of my request of a table for one, the staff was warm and welcoming. Unlike the case with most restaurants in Europe, I did not have to jump around and wave my hands in the air to get the waiter’s attention.

Perusing the drink menu, which is three pages long, I went with something that I knew Germany does not mess up: beer. The delicious Pils from local brewery Sperber Brau proved my beverage intuition correct.

Although the menu was replete with dishes ranging from pasta to calamari, I would have been remiss if I’d gone to a pizzeria and didn’t order pizza.

As with any good experiment, I needed to get a baseline and then progress to a specialty pizza to give an accurate assessment.

This led to an interesting encounter with the waitress after the language barrier left her wondering whether that silly American had really just ordered two 12-inch pizzas for himself.

After an English-speaking waitress clarified that I did in fact want two whole pizzas, my original server brought out a Margherita pizza, the baseline, and a pizza gallo d’oro, which was topped with cheese, salami and pepperoni with an egg cooked on the middle. Pizzeria Antonio’s version of the traditional Margherita pizza. The pizzeria has been in Sulzbach-Rosenberg, Germany, since 1979. (Michael Slavin/Stars and Stripes)

This is not the first time I have been fooled by what the Germans call a Margherita pizza, which in their interpretation is just a normal cheese pizza. That said, it was adequate but lacked a little in the sauce department.

Pizza No. 2 did not disappoint. Normally, I like my eggs scrambled with a side of bacon or oozing out of my burger; I was unsure how I’d react to one on my pizza. Much to my delight, it added a pleasant element to an already delicious ensemble.

I decided to round out my date with myself by ordering dessert, namely the semifreddo, which resembled tiramisu but was served with a chocolate drizzle and apple slices. 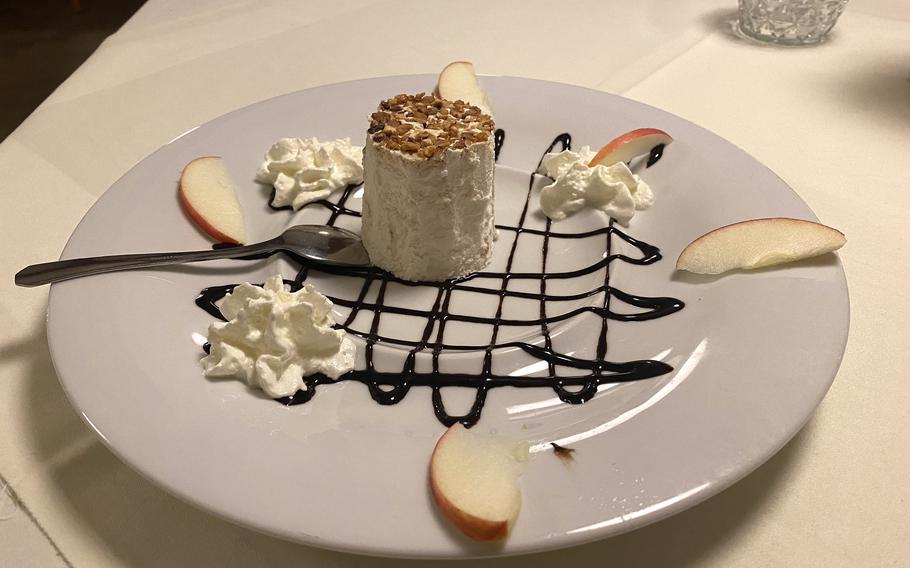 Semifreddo is one of the dessert offerings at Pizzeria Antonio in Sulzbach-Rosenberg, Germany. (Michael Slavin/Stars and Stripes)

When the bill came, I had to take a second look, because I was figuring it would be in the 40 euro range. Much to my surprise, the tab for this hunger-busting bounty was only 24 euros.

For my money, Pizzeria Antonio serves up some of the best pies in Bavaria. Factor in the reasonable prices and the friendly and helpful waitstaff, and you’re in for a quality meal.

Just be sure to have cash handy for the bill, as cards are not accepted.