Just ducky: Thai cafe in England’s Newmarket is a winner The duck board offered at the Thai Street Cafe comes with steamed bok choy, covered in a rich barbecue sauce with sides of shredded spring onion, chili vinegar and jasmine rice. (Kyle Alvarez/Stars and Stripes)

Newmarket is becoming one of my favorite places to frequent while I’m stationed near RAF Lakenheath and RAF Mildenhall.

The city has a variety of fantastic sites and food options which can really hit the spot if you’ve traveled the world and are used to having lots of choices.

I’ve really been craving Asian food lately, and though there are good Chinese and Japanese options around the bases, I had yet to find a good Thai place. But then my eureka moment came in the form of Thai Street Cafe, right off of High Street.

Although not large, it has that “hole in the wall” feel of some of my favorite food experiences. I went on a Tuesday for lunch and it was packed. Good sign number one. 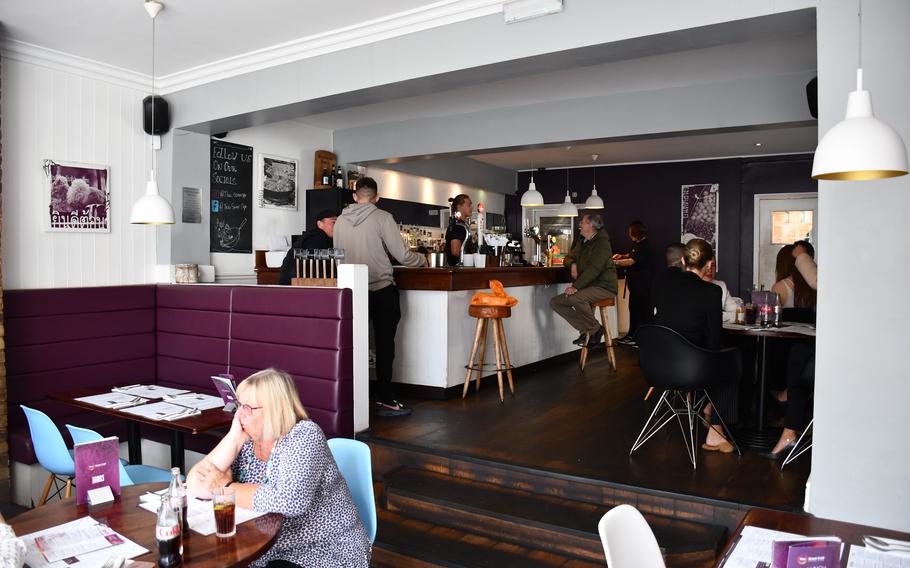 Thai Street Cafe in Newmarket, England, opens their doors to patrons for lunch and dinner six days a week. They offer comfortable seating and a variety of Thai and Asian foods, including Vietnamese pho. (Kyle Alvarez/Stars and Stripes)

As soon as I walked in, I smelled the delicious fragrance of curry, which was not overpowering. Good sign number two.

The cafe offers a variety of curries and pad ka, a common a la carte style Thai meal, but it also has stir fry, assorted Southeast Asian noodle dishes and Vietnamese pho. Online reviewers are high on the panang curry and the drunken noodles., among other meals.

Although I wanted to try the pho, as it had been quite some time since I had that dish, I went for the duck board. It sounded too good to pass up, with a rich barbecue sauce accompanied by steamed bok choy, spring onion and chili vinegar served with jasmine rice.

It was incredible. The fried duck, which came filleted, was crunchy on the outside and extremely tender on the inside.

Normally, duck comes with fat, which adds to the flavor. This duck dish, however, had lean meat but still was a taste bull’s-eye. Every bite was savory and satisfying.

The meal was so good that when I finished, I actually was sad that it was all gone. When I expressed this sentiment to the waitress, she laughed and nonchalantly replied that I could come back and order it again.

How could I argue with that? Although I’m tempted to say I’ll try something else on Thai Street’s menu, it very well might be one or three more times before I can think about anything other than the duck board. Thai Street Cafe, located off of High Street in Newmarket, England, has been in this location for over 15 years. Newmarket is considered the birthplace of horse racing. (Kyle Alvarez/Stars and Stripes)