Glockencafe, a colorful, local place where newcomers will feel welcome 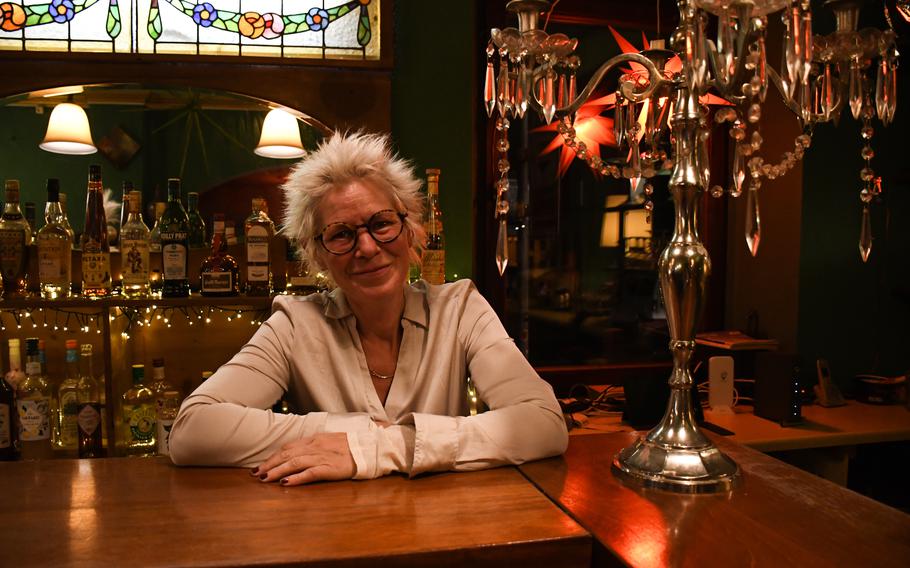 The owner of Glockencafe, Steffi Dieter, is photographed behind one of the restaurant’s two bars Sept. 26, 2022. (Phillip Walter Wellman/Stars and Stripes)

It’s Monday at Glockencafe in Kaiserslautern, Germany, and the place is packed for pizza night.

This is the day each week when the restaurant’s thin pizzas with tasty homemade tomato sauce cost just 8 euros.

I first noticed Glockencafe on an evening weeks earlier while walking through the area, not far from the city’s main train station. I peeked into the large, old windows and saw a painting of a nude woman — rather refined, not trashy — hanging on the dark green walls above wood paneling, illuminated by dangling ceiling lights that seemed straight from the 1920s. A peek into the window of Glockencafe from Glockenstrasse in Kaiserslautern, Germany, on Sept. 26, 2022. (Phillip Walter Wellman/Stars and Stripes)

I later learned that this is the smoking section. My two American colleagues wanted to sit there when we visited for the first time on a Sunday, even though none of us smoke.

We started our meal with one of the restaurant’s signature fall dishes: cheese fondue made with a healthy dose of chardonnay. One of my colleagues thought the alcohol taste was overbearing but my other colleague and I enjoyed the tangy flavor and finished the entire pot. Fondue, one of Glockencafe’s signature fall dishes, is made with chardonnay instead of traditional cherry brandy. (Phillip Walter Wellman/Stars and Stripes)

Next, I had the spaghetti with garlic oil, peppers and chili, one of about a dozen vegetarian or vegan options on the menu. It was the best pasta dish I’ve had in Kaiserslautern to date.

My colleagues both had schnitzel: one plain with french fries, the other with a mushroom sauce and roasted potatoes. They both enjoyed their meals and were particularly impressed by the house salad dressing, so much so that I initially thought they were mocking me for being a vegetarian. But it turned out they just really enjoyed the dressing.

The restaurant was quiet that Sunday, but most days it’s busy and reservations are recommended. On Thursdays, all hamburgers are sold with small beers called stubbies for 13 euros. And on Fridays, gin and tonics are sold for 5 euros from 10 p.m. until the bar closes, which usually happens around midnight. But it can happen before or after depending on demand.

Live concerts also are held twice a month in the smoking section, which has a separate bar that opens during the performances. 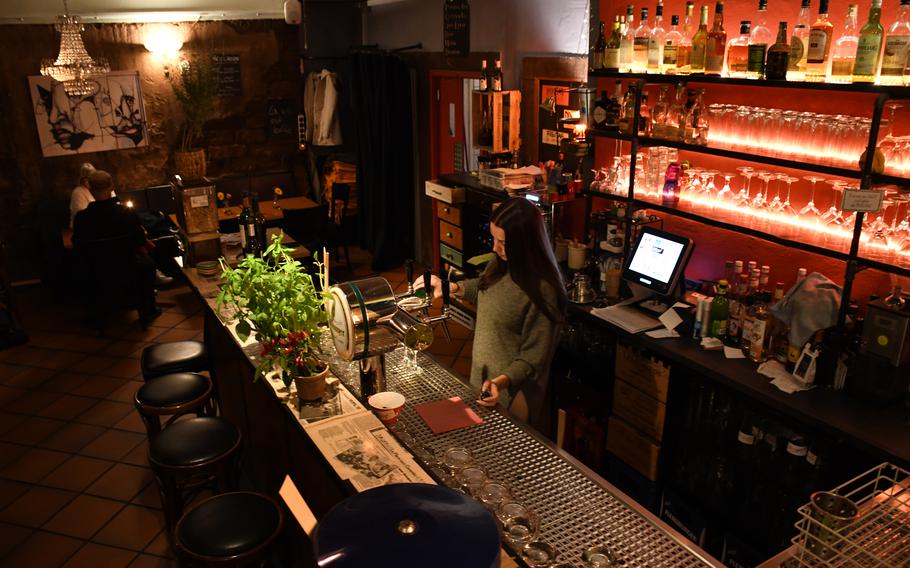 The main bar at Glockencafe is in the nonsmoking section of the restaurant. (Phillip Walter Wellman/Stars and Stripes)

“It’s a little bit difficult with the neighbors upstairs,” owner Steffi Dieter told me when I returned to Glockencafe without my colleagues for a veggie pizza. “We are in a residential area, and if you make music, it’s loud.”

If the neighbors don’t like it, Glockencafe will probably outlast them anyway. It opened in 1981 and celebrates its 42nd birthday this month. Over the years, the establishment has attracted many regulars from all corners of Kaiserslautern society.

“From students to doctors to policemen, the community here is totally mixed,” Dieter told me when describing what she likes best about the restaurant: the sense of community and comfort one feels there. 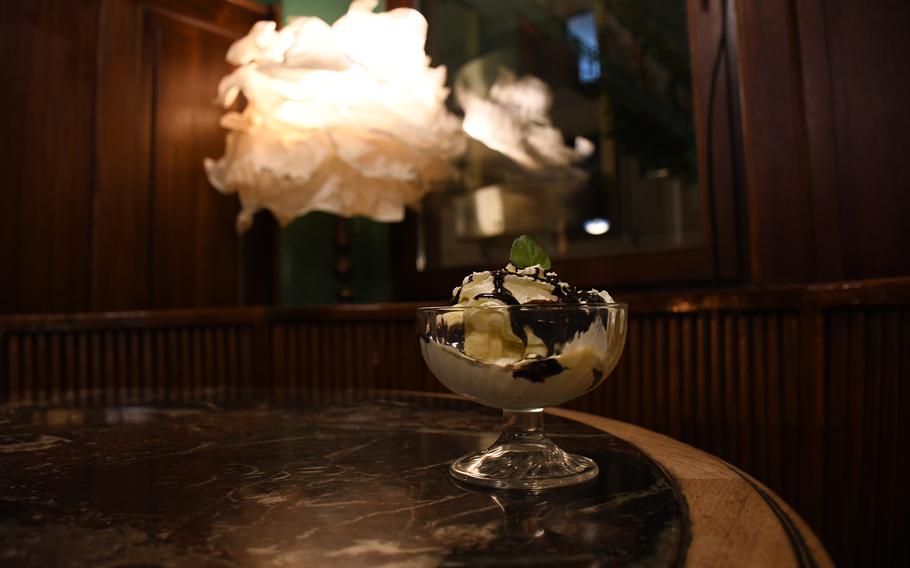 Vanilla ice cream with chocolate sauce is one of several desserts served at Glockencafe. (Phillip Walter Wellman/Stars and Stripes)

I would agree. While the food was excellent each time I visited, Glockencafe’s ambiance is what will bring me back. This is a local place, but as an outsider you’ll feel welcome. The large nonsmoking section is just as cozy as the smoking section and feels almost as bohemian.

As I finished my veggie pizza, three loud bangs near the entrance made everyone turn their head. An acquaintance of Dieter’s had fixed a door that hadn’t been fully shutting when people left, allowing a small amount of cold fall air to pass through.

“Bravo! Bravo!” yelled three women who’d been drinking wine and tea at a table near mine. They begin to clap.

Once the celebration faded, I asked Dieter if Americans often come to Glockencafe.

“In the summer more American people come, but this time of year there are fewer,” she said. “They like our schnitzel.” 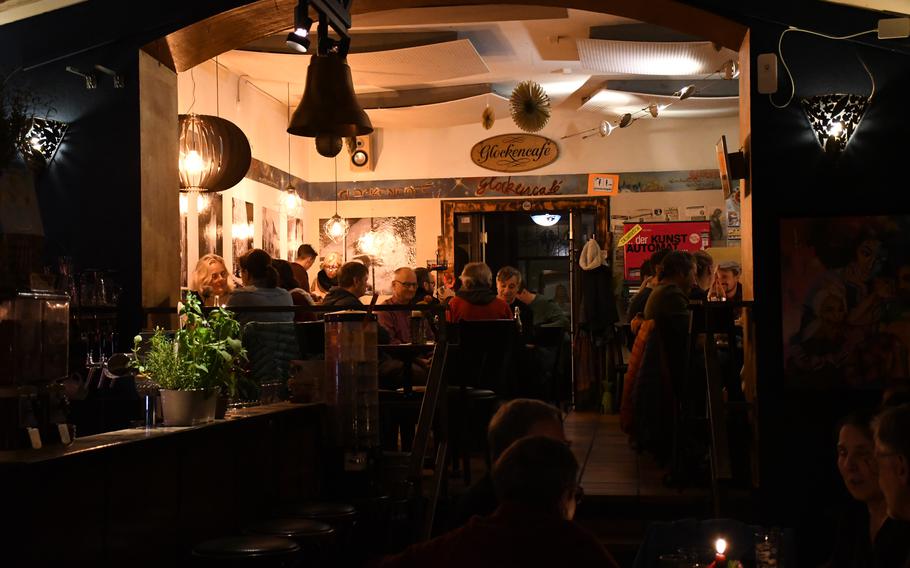 Diners pack into the nonsmoking section of Glockencafe on a Monday, which is pizza night at the restaurant. (Phillip Walter Wellman/Stars and Stripes)

When I told her that both of my American colleagues had schnitzel when they came, she nodded knowingly.

Then I remembered the salad dressing, which I had for the first time that night with my pizza and also enjoyed, and would describe as a kind of Italian.

“We make it here, like everything,” Dieter said, smiling. “And I describe it as nearly Thousand Island. But there are some special things in it that we don’t talk about.” 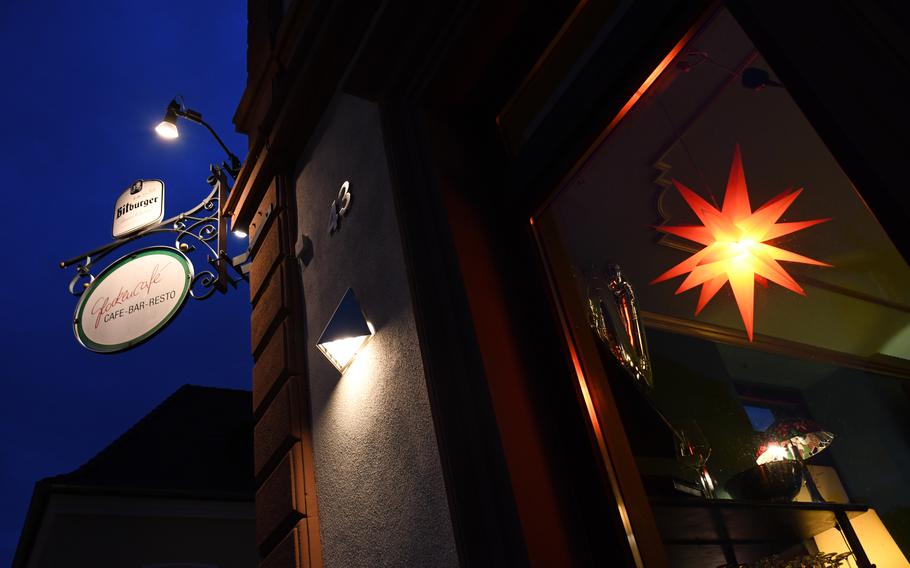 Glockencafe, on the corner of Glockenstrasse and Weberstrasse in downtown Kaiserslautern, Germany, is open every evening of the week except Saturday and serves a range of dishes and drinks. (Phillip Walter Wellman/Stars and Stripes)

Hours: Sunday through Friday, 6 p.m. until late, usually around midnight, depending on how busy it is.