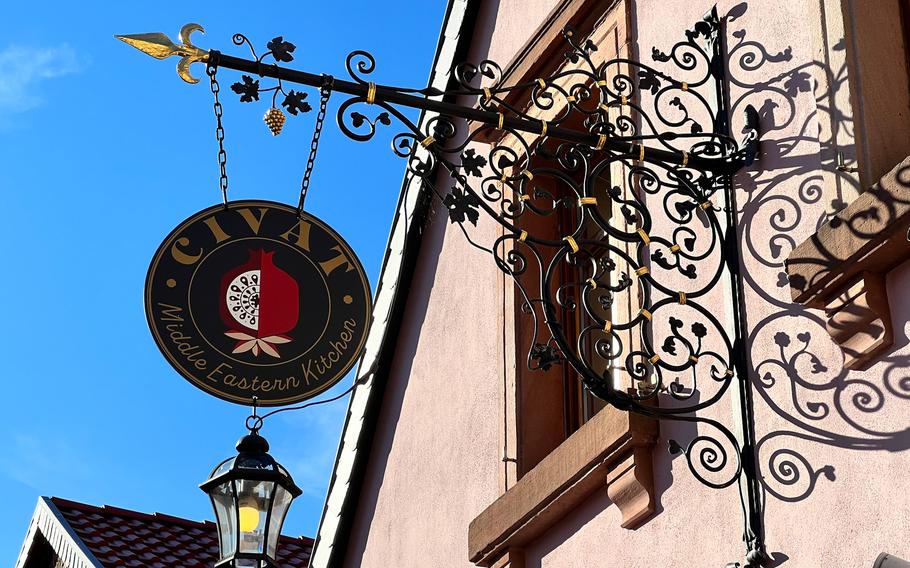 Civat's sign shows off its pomegranate emblem. The Mediterranean fruit brings subtle sweetness to the house-made lemonade, sauces and dips at the Middle Eastern Kitchen in Landstuhl, Germany. (Alexander Riedel/Stars and Stripes)

A request for advice on where to find Middle Eastern food in Germany will undoubtedly prompt many respondents to point you to the nearest doner kebab restaurant.

While the country has developed an understandable love affair with the ubiquitous Turkish pita pockets filled with thinly sliced lamb, sauce and veggies, there is far more to the cuisine of the Levant and its vicinity, as Civat Middle Eastern Kitchen in Landstuhl demonstrates.

A co-worker tipped me off to the new spot earlier this summer, and I knew I had to put it at the top of my list. The restaurant is tucked in a small alley off the town’s historic marketplace. 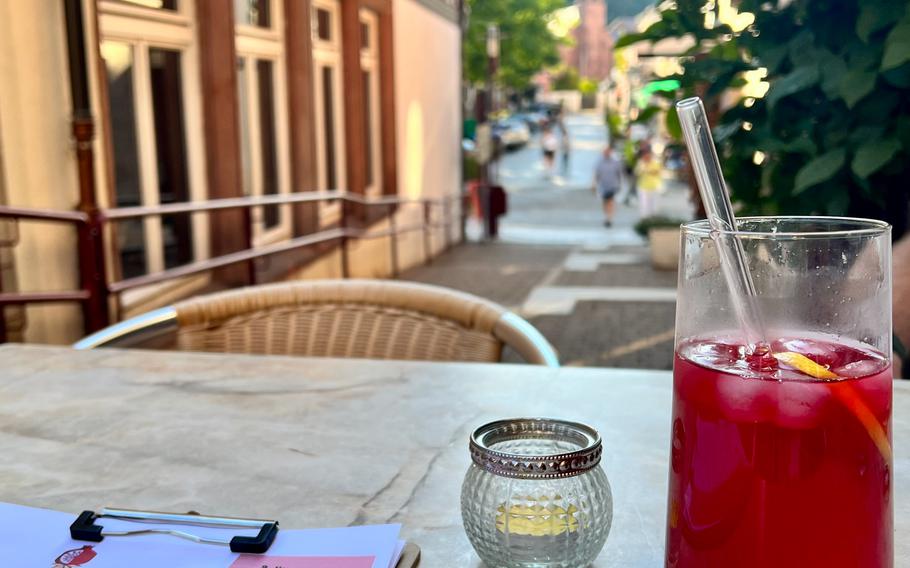 A house-made hibiscus lemonade and the view to the town square in Landstuhl, Germany, make for a wonderful summer day stop Aug. 7, 2022. The restaurant is centrally located in Landstuhl and close to shopping and Nanstein Castle on the hill above. (Alexander Riedel/Stars and Stripes)

My wife and I took our seats outside, soaking in the rays of afternoon sunshine. We welcomed the quickly arriving house-made pomegranate lemonade while admiring the view of the nearby church’s sandstone clock tower.

Civat’s menu is simple and straightforward, offering English translations next to the German descriptions of the items.

As a fan of Middle Eastern food, I knew right away I wanted to try the falafel. A common street food throughout the region, the patties or balls of seasoned and fried chickpeas or beans have long been a challenge to get just right in my own kitchen, so they have become a treat for me when eating out. 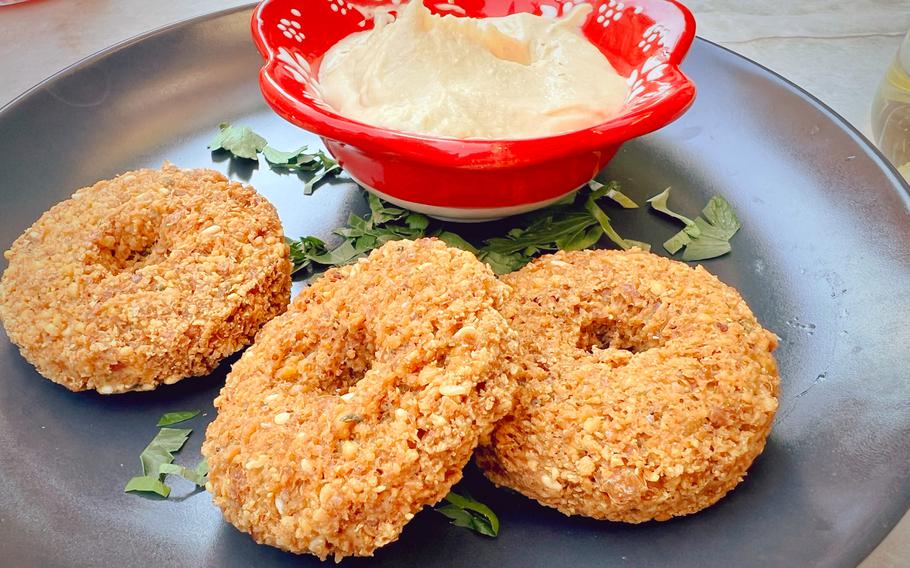 The falafel starter at Civat Middle Eastern Kitchen in Landstuhl, Germany, is served with a size of creamy hummus and is a perfect bite for a quick stop or appetizer. (Alexander Riedel/Stars and Stripes)

Arriving in short order, the falafel starters, shaped like little donuts, were toasted to a golden crispness, yet they were moist inside like good falafel should be. They were far outshined, though, by the smoothest and creamiest hummus dip I’ve ever sampled.

With my initial hunger somewhat curbed, I was eager to jump to my main dish, the bacan, a roasted eggplant topped with a savory, thick sauce of tomatoes, onions, spiced garlic and herbs. It was served in a deep baking dish with rice and warm pita flatbread, and it was as flavorful as it was filling.

Before I could finish my first forkful, however, my wife let out a short, pleased sigh after the first bite of her dish.

“Oh, my God, it’s so good!” she said, eyes closed, laughing at her spontaneous reaction to the chicken tawa, a juicy roasted chicken leg marinated with chickpea flour and spices. The dish blended well with potatoes, onions and rice. 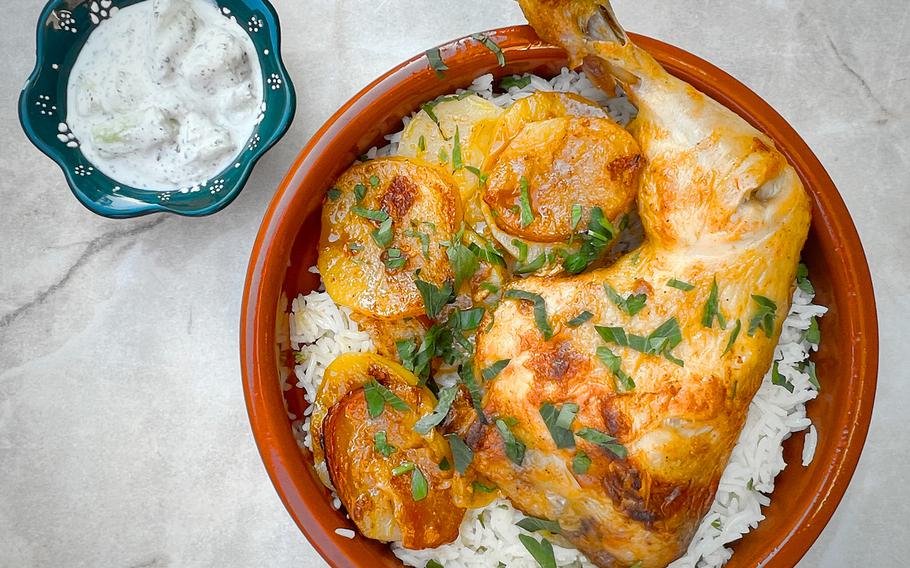 Both servings were generous, but we ate to the last morsel because each bite seemed too good to waste.

Civat is an American- and Kurdish-owned restaurant. Its emblem is the pomegranate, which seems fitting, as the fruit brings subtle sweetness to the delicious lemonade and also features in dips, such as muhammara, which is made with walnuts and roasted red peppers. 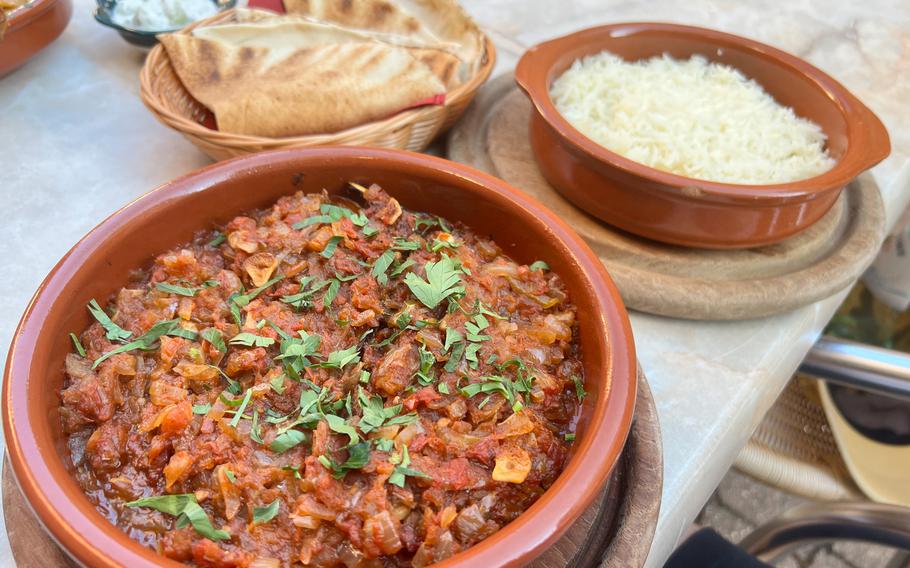 The Bacan roasted eggplant at Civat Middle Eastern Kitchen comes with a rich tomato garlic and herb sauce, served with a side of rice and flatbread. (Alexander Riedel/Stars and Stripes)

While the dishes tend to be representative of the warmer climes of the restaurant’s origins, Civat’s kitchen team also offers plenty of cold-weather comfort food, such as lamb stew with white beans or stuffed veggies, both of which pair well with the seasonal hot honey wine and the pumpkin spice sangria offered during fall.

The dessert menu is unfortunately limited to only one item: a pistachio-filled baklava, which I tried. It was crunchy and sweet yet slightly dry. Fortunately, it was accompanied by vanilla ice cream, and that combo was enough to satiate my sweet tooth. 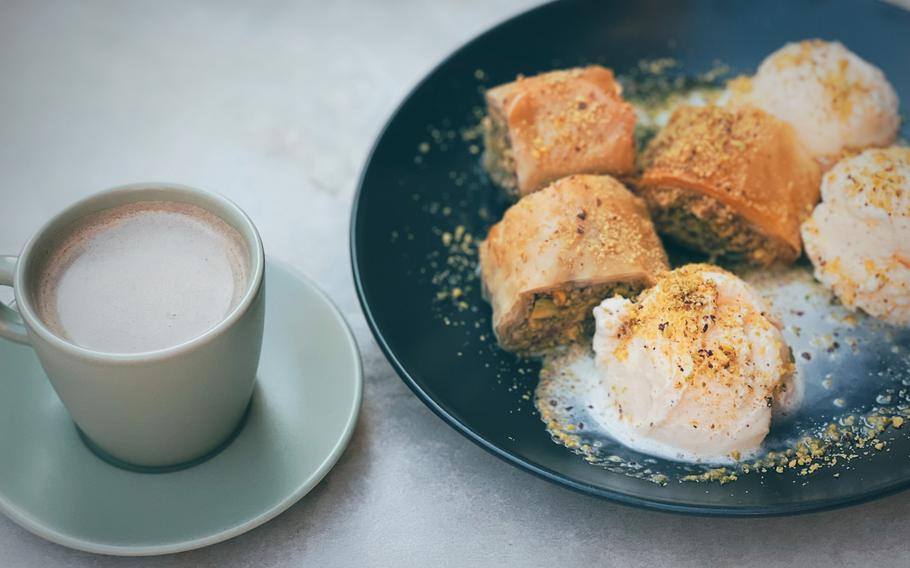 Kurdish coffee pairs well with a plate of baklava and fresh vanilla ice cream at Civat Middle Eastern Kitchen in Landstuhl, Germany, Aug. 7, 2022. Kurdish coffee is not made from coffee beans, but with roasted and ground tarabinth. (Alexander Riedel/Stars and Stripes)

At the recommendation of our friendly waitress, we paired the flaky pastry with a small cup of Kurdish coffee, which was a first for me.

A perfect late-afternoon treat, this caffeine-free delicacy is made not from coffee beans but from roasted terebinth fruits, a relative of the pistachio, which are mixed with milk. The drink came topped with a coffee-like crema, and its smooth, earthy taste went well with the pistachio pastry. 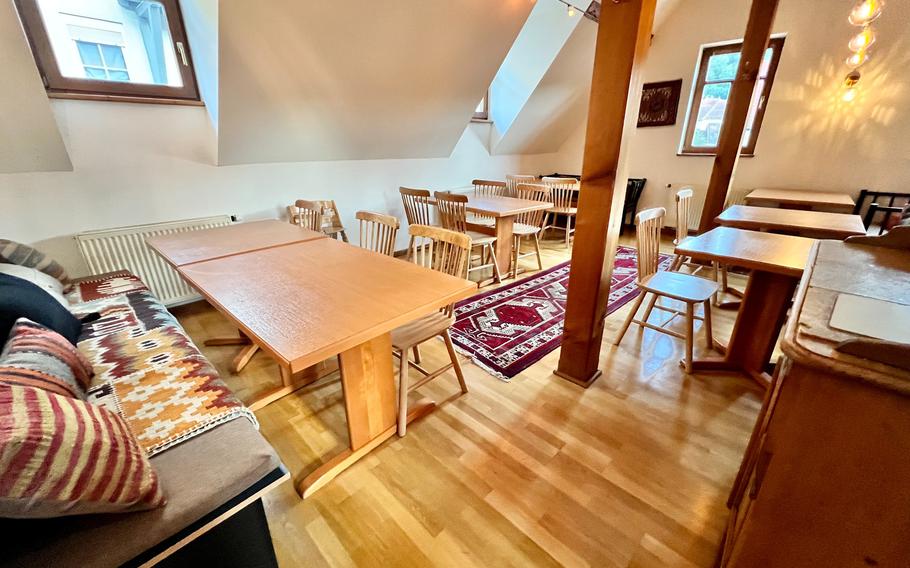 The restaurant opened in May, so it may not be listed in a lot of travel apps and reviews yet. This is likely to quickly change as word spreads.

Civat is a 13-minute drive from Landstuhl Regional Medical Center. It’s also a great stop after a visit to historic Nanstein Castle, which has towered over the town for nearly 800 years and can be reached in less than 15 minutes by foot.

For my wife and me, it’ll be a mandatory stop whenever we’re in town. 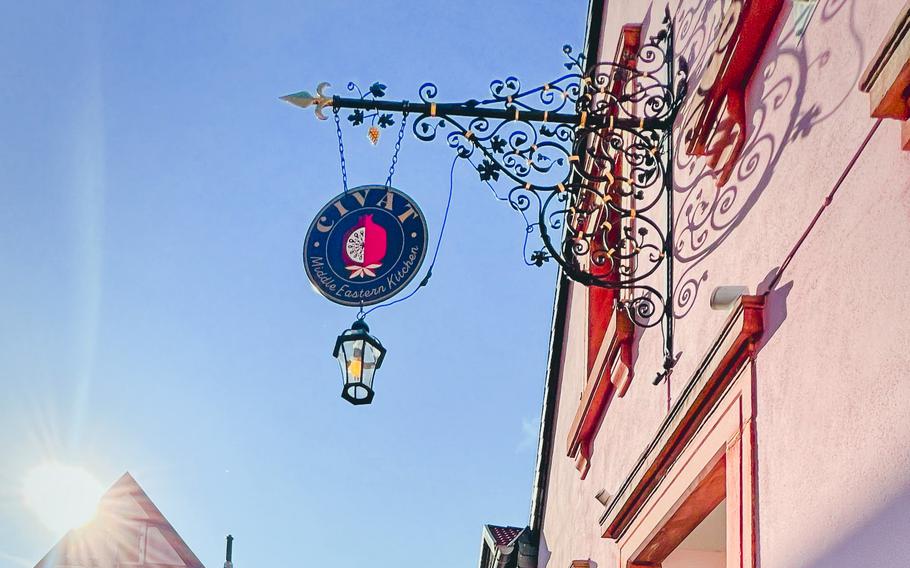 Civat Middle Eastern Kitchen in Landstuhl, Germany, Aug. 7, 2022. The restaurant is centrally located in Landstuhl and offers limited but comfortable outside seating in the alley. (Alexander Riedel/Stars and Stripes)

Address: Hauptstrasse 17, Landstuhl, Germany. Parking at the restaurant is limited, but the Parkplatz Neuer Markt and the parking lot at the Jakob Weber Memorial on Weiherstrasse are close.

Prices: Appetizers start at 4.25 euros, entrees range from 14.50 euros to 26 euros for the mixed grill plate. Drinks include beer on tap at 3.50 euros, soft drinks, and house-made lemonades and iced teas starting at 4 euros.