The bruschetta as served at Trattoria Da Balbi in Wiesbaden, Germany. (David Edge/Stars and Stripes)

I absolutely love food from all around the Mediterranean, whether it be Turkish, Italian, Greek or North African. The characteristic flavor of the dishes is a source of bliss for me.

So naturally, I was drawn to Trattoria da Balbi in central Wiesbaden. Despite the rain during a visit I made with a companion, the two of us decided to join other customers outside on the spacious patio.

Trattoria da Balbi’s menu included varying takes on classic dishes. The pastas included the tagliatelle popular in the north of the country and ravioli with gorgonzola, as well some of the dishes like spaghetti bolognese — which they don’t serve in Bologna — but which are on any Italian menu in Germany by popular demand. There also are vegan and vegetarian options.

Wines are featured on the decent-sized beverage list. We ordered the house wine, which I thought it was a little watery, but my companion loved it. 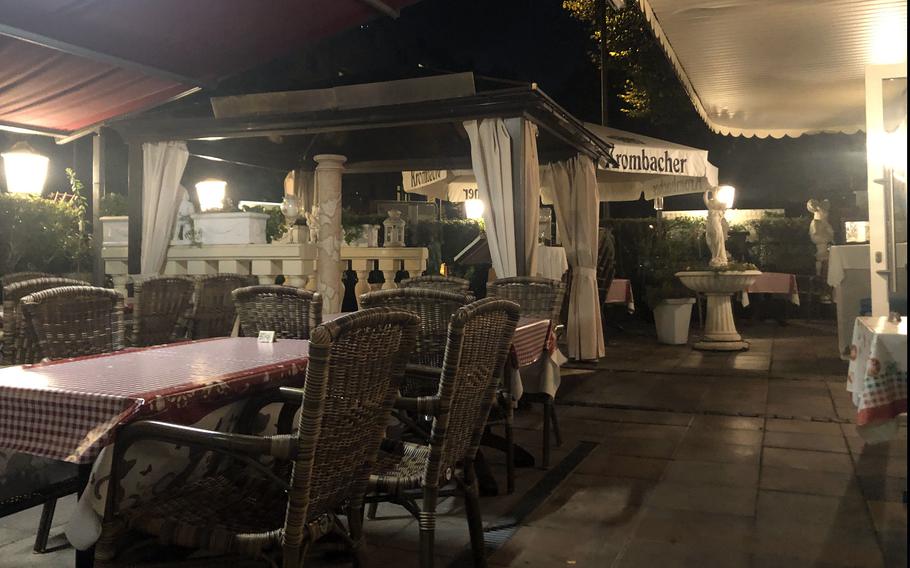 I decided to switch to Lambrusco, which isn’t the most highbrow selection, but so what. I don’t usually say this about wines, but it was delicious.

For an appetizer, we ordered the bruschetta, a toasted slice of baguette with diced tomato, onions, garlic and a drizzle of olive oil. It was well-seasoned and the portion was big enough for us to share.

Because our meal was a late one and I didn’t want to wait for too long, I decided on pizza Calabrese for my main course. Topped with American pepperoni, olives and a spicy sauce, it was good but nothing to write home about. A meal of pork cutlet and pizza served at Trattoria Da Balbi in Wiesbaden, Germany. (David Edge/Stars and Stripes)

My companion ordered the piccata alla Milanese, a pork cutlet with egg and parmesan breading served with root vegetables, which I sampled.

The parmesan was muted but the meat was well-seasoned and came through nicely. The vegetables also proved enjoyable.

For dessert, we had tiramisu, which was served with macerated fruit and fresh whipped cream. It was light and fluffy, with the taste hitting all the right notes expected from this sweet treat. My one critique was with the espresso flavor, which I thought could have been stronger. 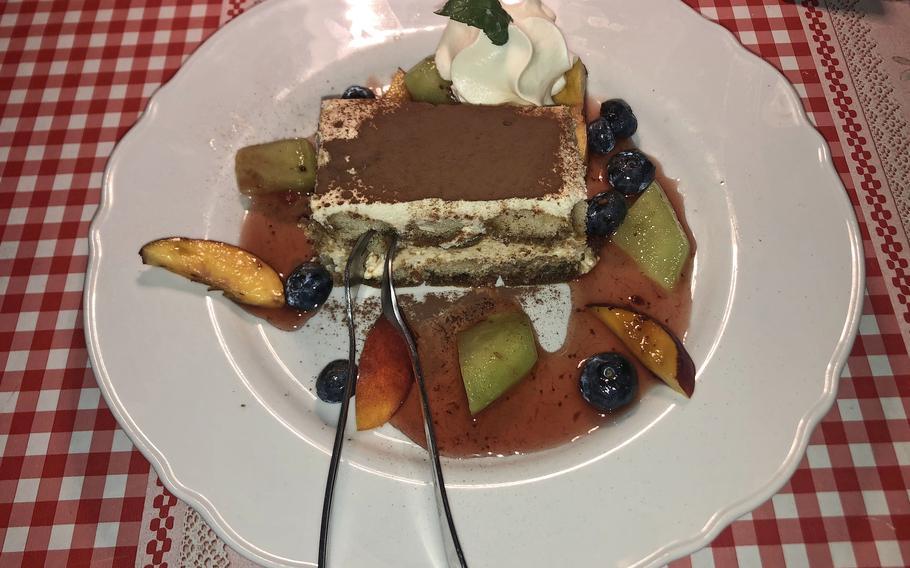 The tiramisu at Trattoria Da Balbi in Wiesbaden, Germany. (David Edge/Stars and Stripes)

In summary, Trattoria da Balbi provided us with overall good food and attentive servers who spoke English and were very polite. The menu offered a good selection of dishes at reasonable prices.

Although the menu is in German, that was not a problem, as the waitstaff provided expert guidance that contributed to a terrific experience.