Beef chimichangas, nachos al pastor and a barbacoa plate, from left, as served at Casa Azteca in Wiesbaden, Germany, in August 2022. (David Edge/ Stars and Stripes)

Having lived in Texas for most of my life and visited Mexico several times, I rarely have high expectations of Mexican food in Germany, given its great distance from the source.

So Wiesbaden’s Casa Azteca was a pleasant surprise. Walking into the restaurant, I was very impressed with the Dia de los Muertos, or Day of the Dead, motif. 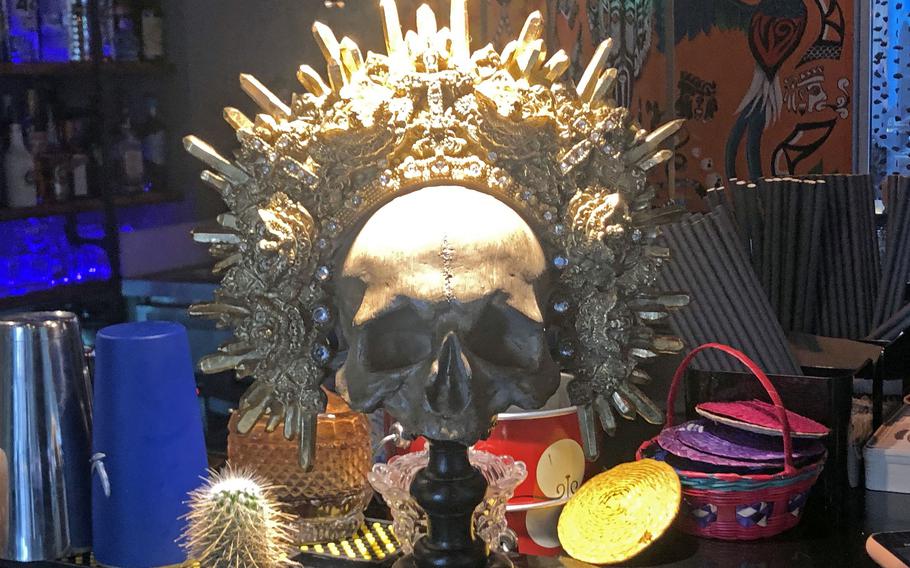 This decorated skull is part of Casa Azteca’s Day of the Dead motif. Casa Azteca is a Mexican restaurant in Wiesbaden, Germany. (David Edge/ Stars and Stripes)

Mexican food liberally uses citrus fruits as marinades in combination with peppers, chocolate, basil, cinnamon and and assorted other flavorful things. This blending of dynamic ingredients is one of the reasons Mexican cuisine is so popular in the U.S.

Since it was a warm day, my best friend and I decided to eat outside on the patio, and once again I was impressed with a large mural of a Mexican village. The well-apportioned patio provided plenty of room for customers and wait staff to move around.

I found Casa Azteca’s menu very impressive in its array of regional cuisines from across Mexico. It also contains vegan and vegetarian options.

In addition, the drink menu is large and has plenty of specialty beverages. There were 11 different margaritas on the menu, some I have never even heard of like the Truffle Margarita. There were other interesting drinks on the menu such as the Mexican Colada, the Tequila Mule and a Mango Chili Mojito. 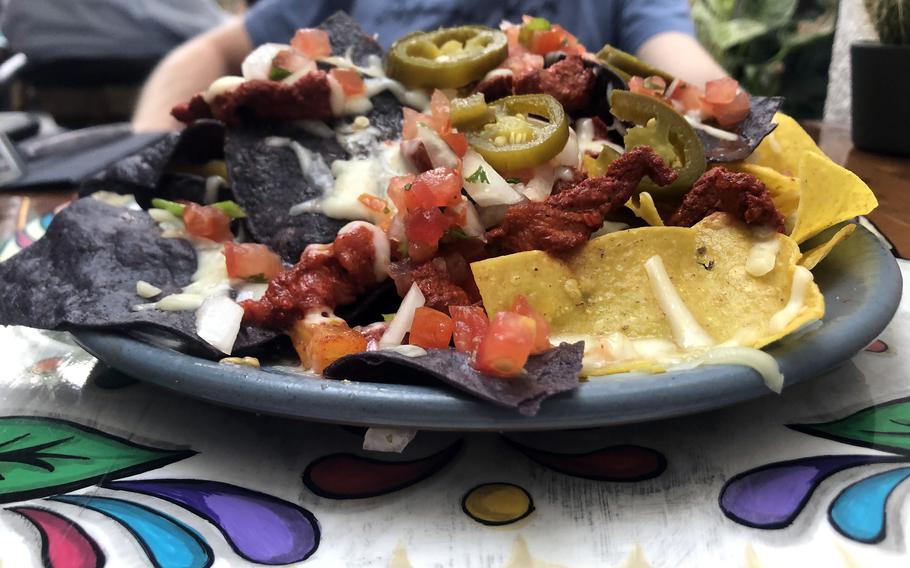 For an appetizer, we ordered nachos al pastor, which came in a portion big enough to share. Red, white and blue corn chips formed a bed for the house-made pico de gallo, shredded cheese, pickled jalapenos and bits of pork al pastor. These nachos were amazing.

My friend chose the beef chimichangas for his entree. The dish was loaded with beef, refried black beans and rice and came with a dipping sauce made with avocado, lime and chili.

He gave the the Casa Azteca chimichanga positive reviews and said he would order it again. I sampled the dipping sauce, which was good but not extraordinarily so.

I ordered the barbacoa plate. It came with a small pot of barbacoa, rice, refried black beans and house-made corn tortillas with diced onions and coriander and lime wedges.

Beef is the typical meat used in barbacoa. It is heavily seasoned and either cooked in a clay pot or wrapped in banana leaves and then slow-cooked in the ground. When cooked correctly, it is fork-tender and very delicious.

The chefs at Casa Azteca did a good job with the barbacoa. The meat was tender, juicy and full of flavors that reminded me of home.

The Casa Azteca was a pleasant surprise for me. It’s not often you find a restaurant in Germany making Mexican food the right way. Everything from their sauces to the warm tortilla, both corn and flour, were made in house. A sugar skull mural painted on the walls at Casa Azteca in Wiesbaden, Germany. (David Edge/ Stars and Stripes)

Even the murals on the walls and the furniture were all designed to make customers feel as if they were in a restaurant in Mexico or the American Southwest.

When I get nostalgic for home again, I will go back to Casa Azteca for more of the food that brought me so much comfort when I was growing up.