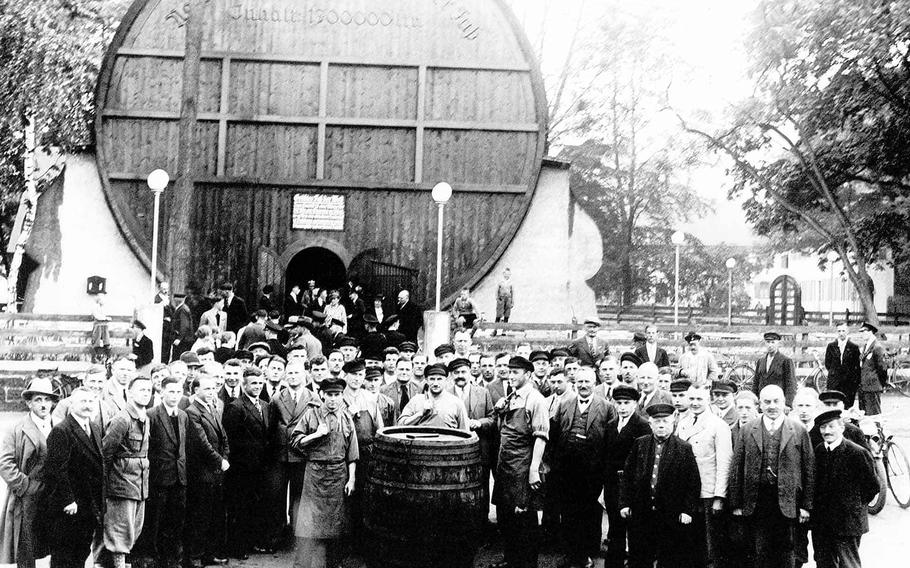 France and Italy are the European countries most commonly associated with wine experts, but rainy Germany boasts 13 prominent wine-growing areas of its own — as well as a gargantuan way of showing off its bottle bona fides.

In 1934, German vintner Fritz Keller wanted to create a memorial to German wine in his hometown of Bad Duerkheim, a village near Germany’s famed Wine Route.

A master cooper, or trained maker of barrels and casks, Keller knew no better way to honor the work that goes into making wine than with a giant wine barrel.

Easily seen from the roadway, the barrel deserves its designation as “giant.” It took nearly 200 trees to make and boasts a diameter of nearly 45 feet. If filled, the barrel could fit more than 449,092 gallons of wine.

However, it never contained the burgundy ambrosia but was always a tourist attraction. The barrel stands in a long tradition of giant “somethings” popular along American highways.

Having been to the world’s largest fork in Springfield, Mo., and the Big Coffee Pot in Bedford, Pa., my wife and I knew we had to add this giant German monument to our list. We also wanted to find out how the food served there stacks up as a tourist draw.

The restaurant offers an American-size parking lot worthy of the giant barrel attraction.

A friendly member of the waitstaff showed us to our seat in an oak-clad dining room. To our dismay, we did not step right into the belly of the barrel.

After surviving World War II, the restaurant remained so popular that seating added outside the barrel is used for most daily traffic today. For those who don’t want to miss out on the wine-barrel feel, the restaurant features rustic booths inside smaller wine-barrel-style cutouts. The dining room in the wine barrel is available but only for group gatherings, and it must be reserved for such occasions. The dining room in the bottom of the wine barrel at the Duerkheim Giant Barrel in Bad Duerkheim, Germany. The wine barrel dining room offers seating for 70 but is reserved for groups and special occasions. (Alexander Riedel/Stars and Stripes)

After we recovered from this slight disappointment, our waiter got us started by plopping down a leather-bound Bible of a menu. It featured a well-curated array of German traditional fare with some international additions, such as pasta and seafood dishes.

The restaurant also offers a small vegetarian menu, but vegans and those with food allergies beware. An entire page in the restaurant’s book-like menu is solely dedicated to describing all the allergens used in its kitchen, alongside a steadfast acknowledgment that the barrel proudly serves traditional German fare and is not allergen-friendly.

My wife, who follows a gluten-free diet, was nonetheless able to find satisfying options and chose the salmon filet with green sauce, saffron rice and a generous helping of mixed salad. 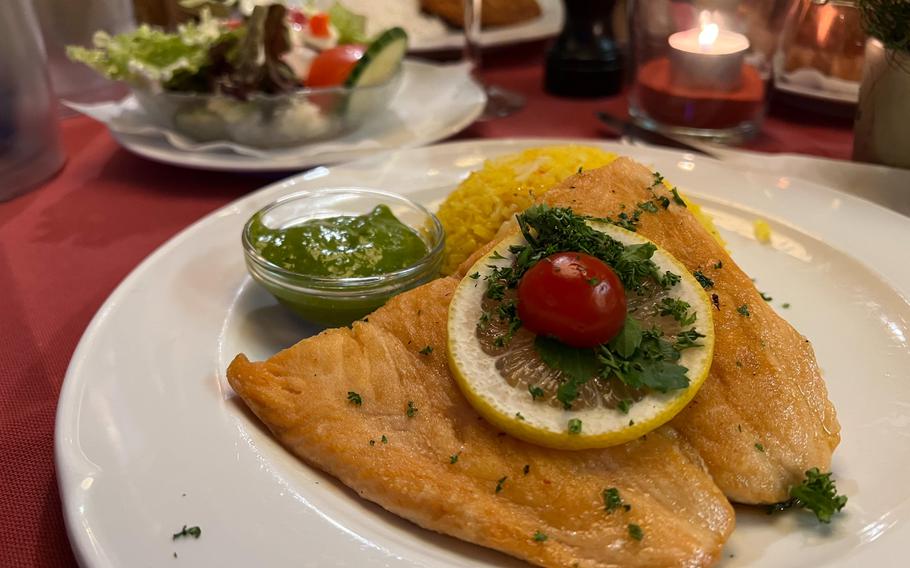 The salmon filet with green sauce and saffron rice at the Duerkheim Giant Barrel in Bad Duerkheim, Germany. The restaurant specializes in traditional German cuisine but offers dishes ranging from pasta to seafood as well. (Alexander Riedel/Stars and Stripes) 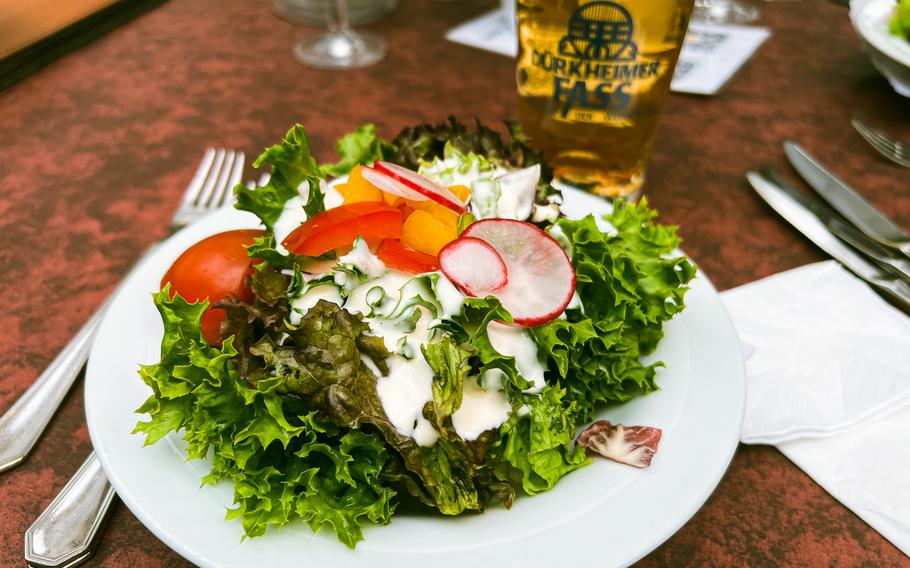 This salad is served in traditional German style, with servings of julienned carrots and coleslaw hidden underneath leafy greens, peppers, onions and radishes. (Alexander Riedel/Stars and Stripes)

I chose the vegetarian rendition of the schnitzel, which came topped with a creamy bearnaise sauce and rice. The restaurant was well-visited but not crowded, and the clean, old-timey country flair seemed authentic and comfortable for both an extended lunch and relaxed dinner. The vegetarian schnitzel with bearnaise sauce and rice at the Duerkheim Giant Barrel. The restaurant offers a small vegetarian menu for those not tempted by the long list of meat lovers’ favorites. (Alexander Riedel/Stars and Stripes)

We made a second visit with family and chose to sit outside. Surrounded by trimmed hedges, the cozy patio gives a nice beer-garden atmosphere in the shade of large umbrellas and the barrel itself. The outside beer garden patio in the shade of the Duerkheim Giant Barrel offers seating for up to 210 guests. (Alexander Riedel/Stars and Stripes)

Sitting outside also gives visitors the opportunity to breathe in the air coming from the nearby Bad Duerkheim graduation tower, or saline, which allows saltwater to evaporate into droplets. The mineral-enriched air is said to have beneficial health effects similar to those of sea air, our waiter explained.

My family opted for such favorites as the traditional Jaeger schnitzel, which was perfectly cooked to golden-brown perfection and came with a deliciously creamy mushroom sauce. 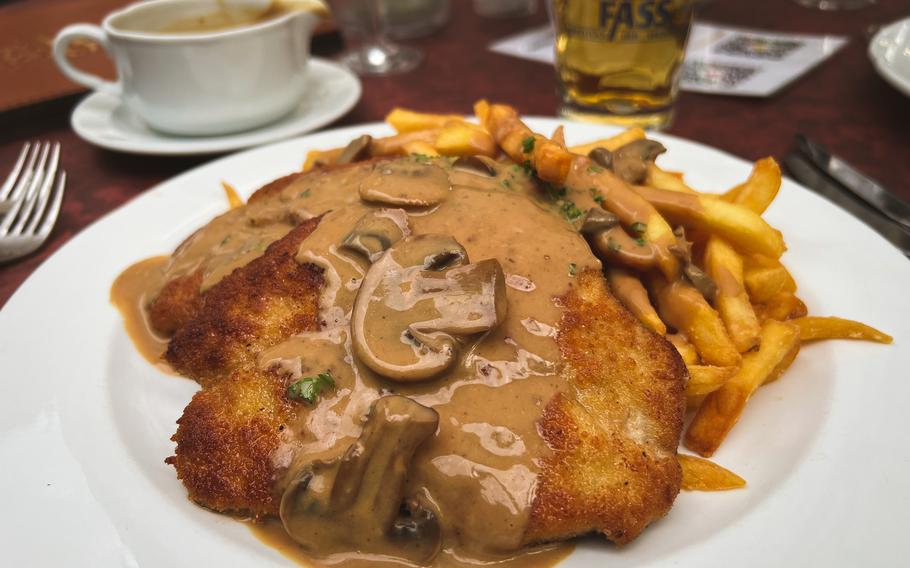 A traditional Jaeger schnitzel with fries at the Duerkheim Giant Barrel in Bad Duerkheim, Germany. The restaurant is not just a tourist gimmick. It serves generous helpings of well-executed traditional fare. (Alexander Riedel/Stars and Stripes) 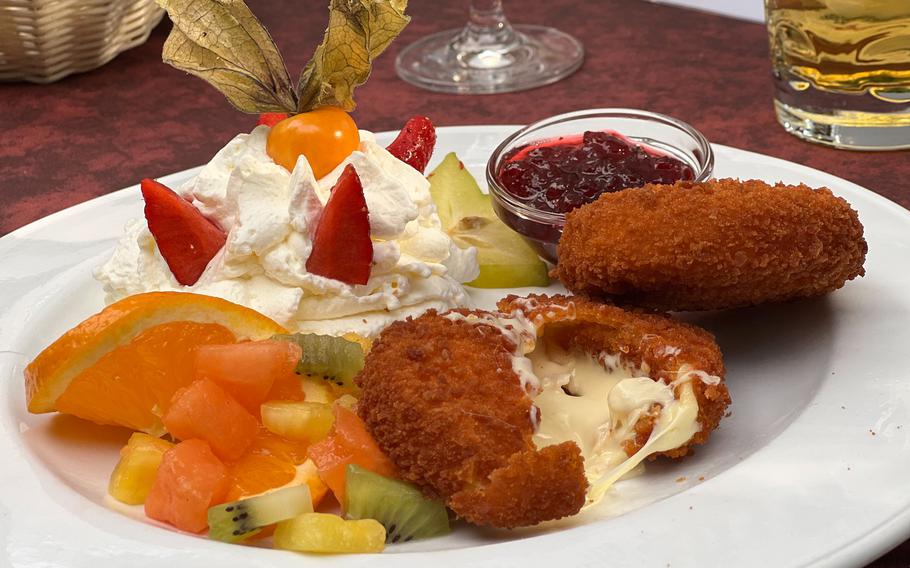 The baked sheep’s milk cheese with hazelnut breading served with cranberry sauce and fruit at the Duerkheim Giant Barrel in Bad Duerkheim, Germany. The hearty cheese blends well with the sweet whipped cream and fruit flavors, creating a satisfying dessert or refreshing standalone dish in the summer. (Alexander Riedel/Stars and Stripes)

My wife chose the rump steak served the “Palatinate way,” in au jus with pan-fried onions and country potatoes. She followed the menu’s recommendation and paired the meal with the red Fitz, a red wine melange of cabernet, merlot and St. Laurent grapes matured in a local oak barrel with berry and smoky paprika flavors. 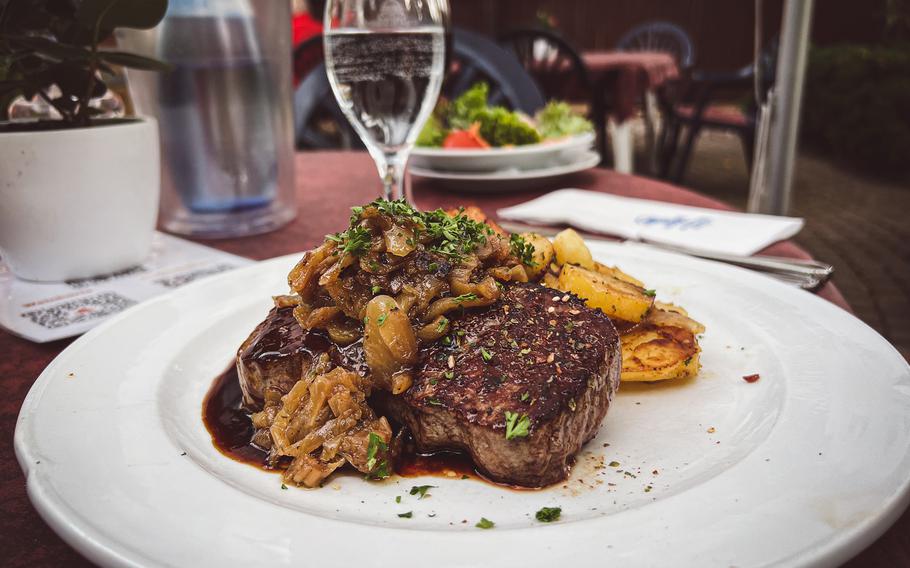 A juicy rump steak prepared the “Palatinate way,” with au jus, topped with pan-fried onions and served with country potatoes at the Duerkheim Giant Barrel in Bad Duerkheim, Germany. (Alexander Riedel/Stars and Stripes)

While the giant barrel has always been a bit of a gawker gimmick, the restaurant is anything but a tourist trap. It offers reliable and well-executed German favorites in a folksy traditional atmosphere without undue kitsch.

For me and my wife, it is the perfect place to take family visiting the area and looking for good German cuisine.

The best thing of all, however, is the lavish portions. After both visits, we left stuffed and felt as round as the barrel that beckoned us there. We already know we’ll be back for the Wurstmarkt in September. The Duerkheim Giant Barrel offers ample parking and is located next to the grounds of the renowned Wurstmarket, an annual festival celebrating German food, beer and wine. (Alexander Riedel/Stars and Stripes)

Hours: Monday through Saturday, 11:30 a.m.-10:30 p.m. On Sundays and German holidays, the restaurant closes at 10 p.m. Last order for food is one hour before closing. Winter hours may vary.