Chilean vibe makes Chacarero prime place to have a cow 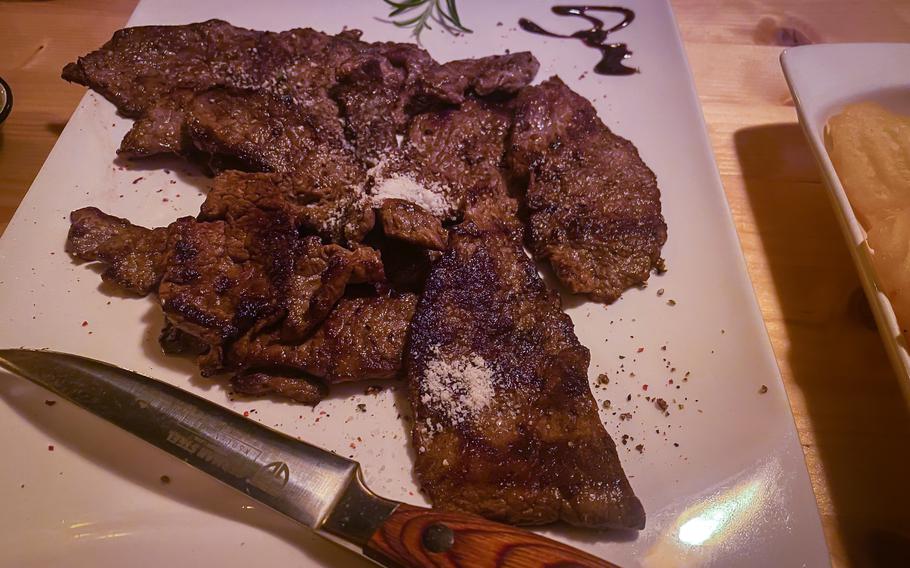 The Chacarero special is the most cost-conscious steak option for patrons at the restaurant. Five sizes, ranging from 5.6 ounces to 17.6 ounces, are listed on the menu. (David Edwards/Stars and Stripes)

People of a certain age will remember an iconic Wendy’s commercial from the 1980s in which an elderly woman repeatedly asks “Where’s the beef?”

In the Kaiserslautern area, the top answer to that question is Chacarero Chilean Steakhouse, near Ramstein Air Base.

The restaurant occupies the ground floor of a building that is probably as close to cookie-cutter as a German developer can produce.

But the interior is a different story. Dominated by wood and decked out in quirky light fixtures, it evokes the cultural richness of Chile. Vivid landscape photography of the country’s natural wonders punctuates the walls along with artistic creations dubbed “retablos,” the Spanish word for altar images.

After settling in, I treated myself to a pisco sour as a belated birthday present.

Chacarero bills the cocktail as the national drink of Chile. Pisco is a South American brandy that is a source of dispute between Peru and Chile, in the same vein as the competing claims by Slavic countries about the origins of vodka.

The pisco sour made for a tasty complement to the steakhouse’s star attractions: the juicy cuts of grain-fed and grass-fed beef. The former is sourced from Australia, the latter from Argentina.

Walk-in customers can order whatever available menu items suit their fancy. But there is also an option to call beforehand and specify a steak, thereby allowing the Chacarero grillmasters plenty of cooking time to maximize the meat’s tenderness and flavor.

On a return trip, I pre-ordered a 10.5 ounce New York strip steak and gave my expected arrival time. When I walked in the door, I was told that my main course was just about ready. 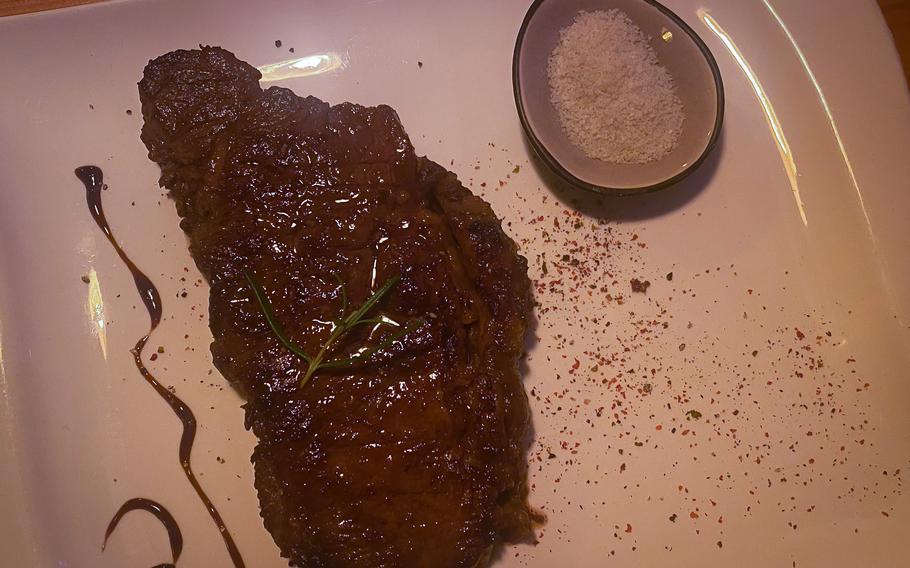 Chacarero Chilean Steakhouse offers its New York strip in three sizes. Pictured is the 10.5-ounce steak. Most of the restaurant's cuts of meat consist of grain-fed Australian beef. (David Edwards/Stars and Stripes)

And a fine hunk of meat it was. I liberally sprinkled it with grains of the salt served in a small bowl.

Chacarero’s choices for side dishes lack a lot of, well, choice, and the restrictions of my gluten-free diet didn’t help. For the birthday meal, I went with the sauteed potatoes, which hit the spot and were well-prepared.

I also asked if I could order the fried egg but have it scrambled instead. That was not possible, I was told. So meat and potatoes it was.

The second time, the side dish situation was even more dire. I asked for rice and sauteed potatoes, but neither was available. A seasonal salad with vinaigrette ended up being the only accompaniment to my steak. 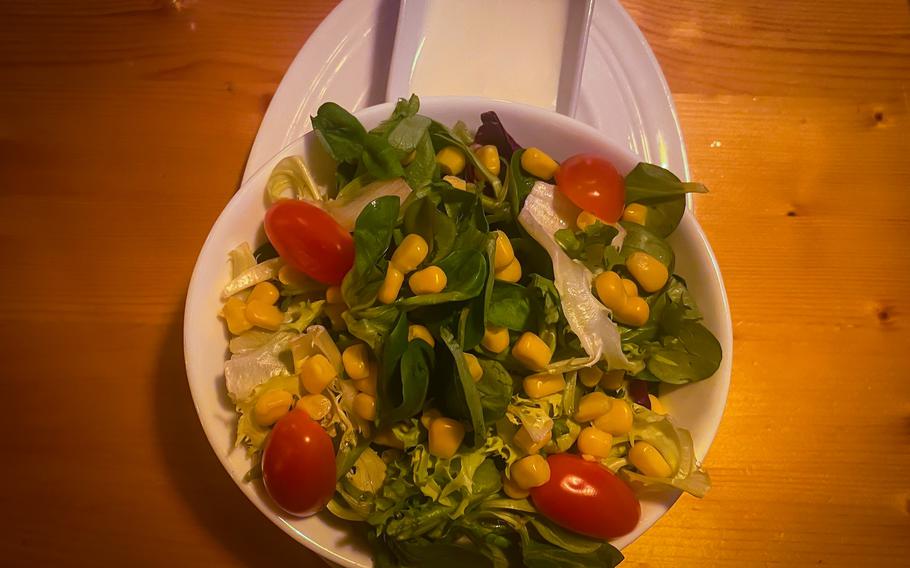 Chacarero's seasonal salad is offered in three sizes. It has all of the ingredients of the more comprehensive Chacarera salad, which adds avocado and green beans. (David Edwards/Stars and Stripes)

I decided to splurge for dessert and test my theory that indulging my sweet tooth would offset the disappointment of unexpected side dish scarcity. Hypothesis confirmed.

My choice was dulce de leche. I was expecting it to be something akin to custard, based on my association with the name, but instead I was served a bowl of dulce de leche ice cream. Only later did I notice that on the menu, it is listed under the heading “ice cream.” 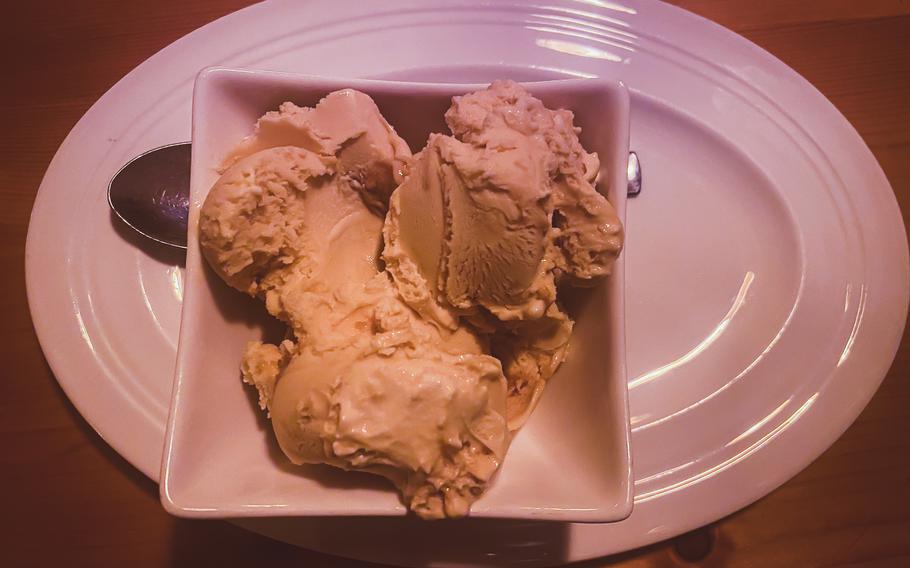 Dulce de leche is one of three ice cream flavors at Chacarero Chilean Steakhouse in Kaiserslautern, Germany. The other dessert item at the restaurant is mini churros. (David Edwards/Stars and Stripes)

Despite the surprise, I enjoyed it. And besides, kvetching about things that qualify as delightfully sweet strikes me as the culinary equivalent of Grampa Simpson shouting at clouds.

The nature of the food served at Chacarero will likely entail a rather sizable dent in the wallet. But there are less pricey options, such as steak sandwiches and empanadas.

If my experience is any indication, though, you get what you pay for there. It’s good food for the money, and the atmosphere is warm and welcoming.

Chacarero is owned by a Dutchman who is married to a Chilean, so that nuance helps distinguish the place from more common Argentine or Brazilian meat-centered restaurants.

From the owner on down, the staffers are personable. And thanks in part to Chacarero, Chile has more than secured its place on my globetrotter bucket list. 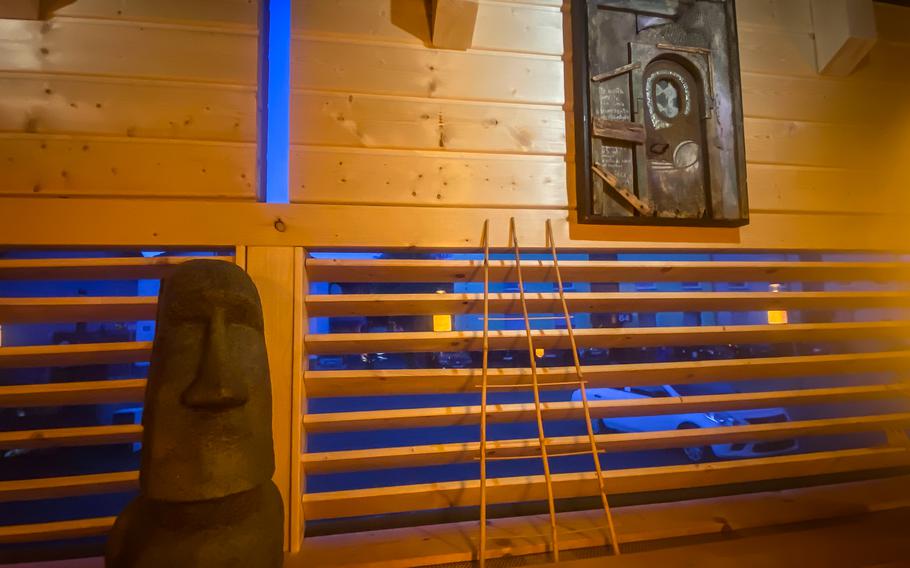 Imitation moai, the famous statues from Chile's Easter Island, decorate the interior at Chacarero Chilean Steakhouse in Kaiserslautern, Germany. Another feature of the decor is a set of artistic renderings called "reatablos," a Spanish word denoting an altar piece. (David Edwards/Stars and Stripes) 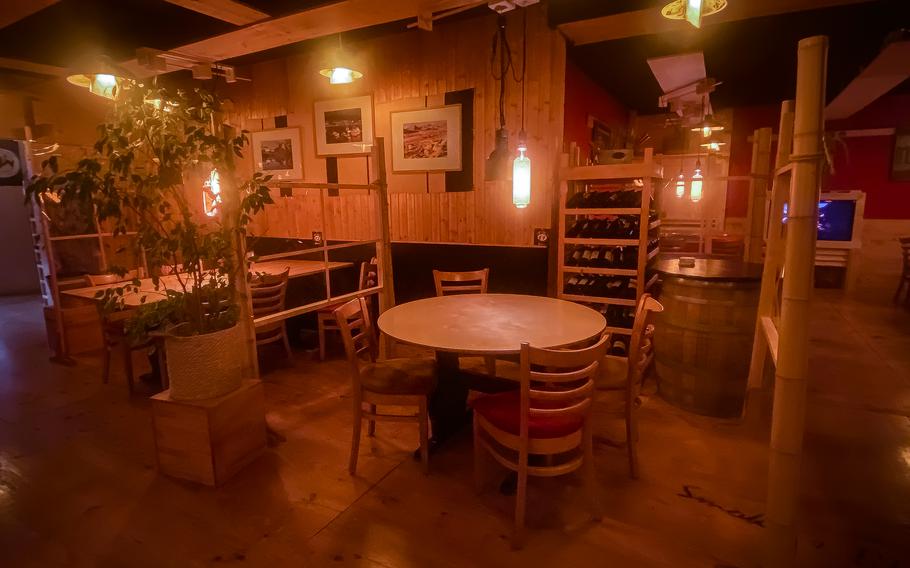 Depictions of Chile's natural beauty combine with copious amounts of wood inside Chacarero, a steakhouse near Ramstein Air Base in Germany. (David Edwards/Stars and Stripes) An assortment of Chilean wines for sale at Chacarero in Kaiserslautern, Germany. The steakhouse owner's wife is a native of Chile, and the decor is replete with cultural references to the South American country. (David Edwards/Stars and Stripes) 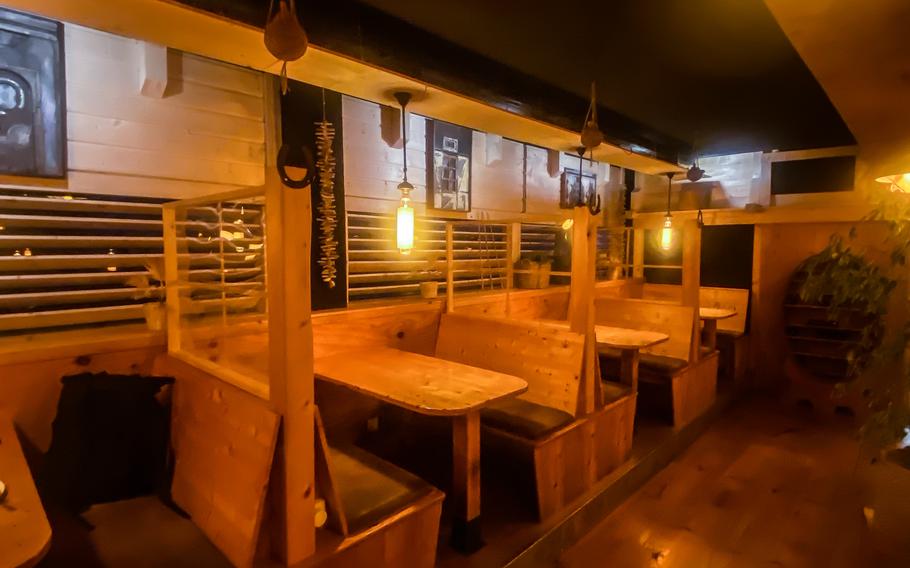 Seating at Chacarero Chilean Steakhouse, near Germany's Ramstein Air Base, consists of tables and wooden booths. There is a piano in the dining room, so sometimes patrons can hear live music. (David Edwards/Stars and Stripes) 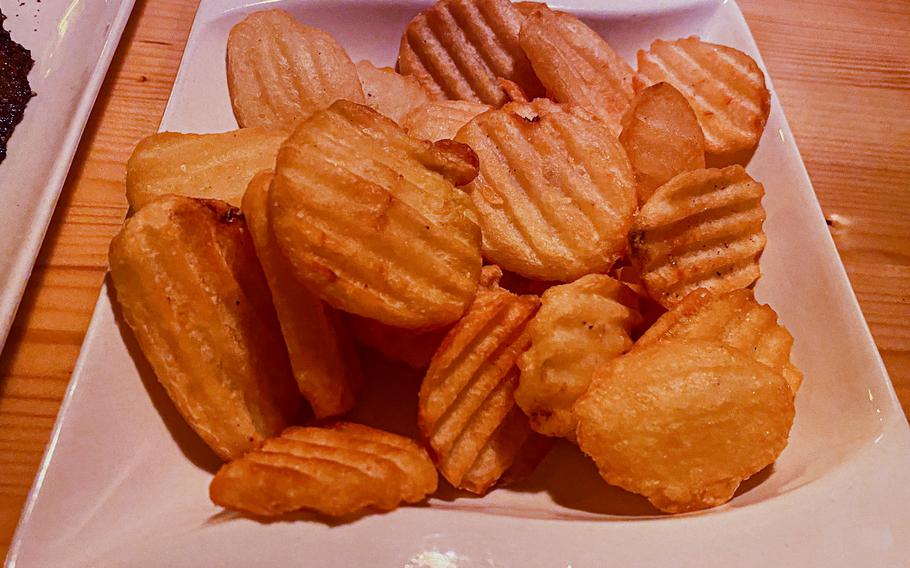 Sauteed potatoes are one of five side dishes available at Chacarero, a Chilean restaurant in Kaiserslautern, Germany, that specializes in steaks. (David Edwards/Stars and Stripes)

Cost: Steak prices range from 22 euros for the 5.6 ounce Chacarero special to 109 euros for the 17.6 ounce ribeye special. Call ahead to find out what cuts and sizes are available. Steak sandwiches, 15-27 euros; empanadas, 11-15 euros; Kids’ menu items range from 8 to 14 euros.