Food is hit and miss, but the brew and view at this Homburg beer garden impresses 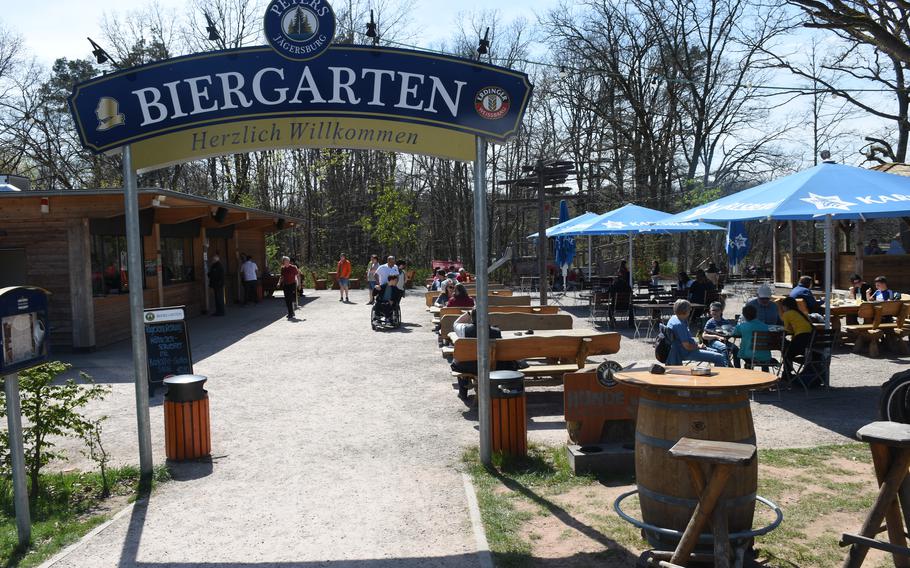 The Peters Alm beer garden in Homburg, Germany, is a good place to relax on a sunny day after exploring the nearby area, which includes a lake, hiking trails and climbing course for kids. The restaurant is southwest of Ramstein Air Base, about 20 minutes by car. (Jennifer H. Svan/Stars and Stripes)

After the cold and gloom of a German winter, nothing quite beckons like a beer garden when spring blooms.

And one I found online, in Homburg next to Lake Jaegersburg and a forest climbing park for kids, held particular promise on a recent warm April weekday.

To my dismay, though, it was closed when I got there, despite posted hours advertising otherwise. Two German women who appeared equally disappointed by the unexpected closure pointed across the lake at another beer garden.

We all ended up at Peters Alm a few minutes later. The place was bustling with cyclists, hikers and families during what for many Germans was an extended Easter vacation. But plenty of tables were open.

The place checked all the boxes for beer garden ambiance: wooden tables and benches spaced amply apart; tall deciduous trees that would soon offer shade once their leaves sprouted; a nice view of the lake; and a small play area with a wooden pirate ship for kids. 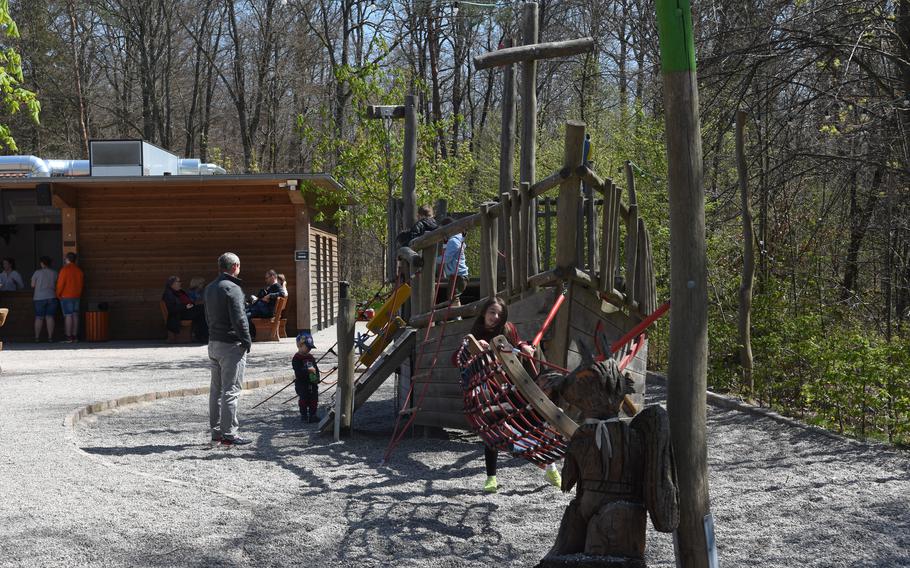 Kids can play on a wooden pirate ship or swing while their parents relax at the Peters Alm beer garden in Homburg, Germany. (Jennifer H. Svan/Stars and Stripes)

Unfortunately, the food somewhat missed the mark. I ordered the day’s special, a fried chicken breast with traditional German potato salad. The chicken was crisp and tender, which surprised me. Since it was ready in minutes, I’m guessing it came from a warmer and wasn’t freshly made. Fried boneless chicken breast with a side of potato-cucumber salad was the special recently at the Peters Alm beer garden in Homburg, Germany, April 19, 2022. The specials change about every two days. (Jennifer H. Svan/Stars and Stripes)

It was the potato-cucumber salad that put a damper on my picnic. It was enough to feed three people, if those three people liked their potato salad soupy and flavorless.

The tab for just the meal was 10.50 euros, which seemed on the high side. Traditional beer garden fare, such as french fries and bratwurst, might have been a better option.

Or one of the Saarland-Bavarian specialties on the menu, such as the crispy alpine pork knuckle. I saw a few plates go out with liver dumplings in dark beer sauce with a side of sauerkraut and brown bread, a hearty meal to be sure.

The few vegetarian options were labeled on the menu. They included cheese spaetzle with roasted onions or truffles; and several types of salad.

My consolation prize was a piece of chocolate cake and a cappuccino. My first choice was the tiramisu, but not for 6.50 euros. 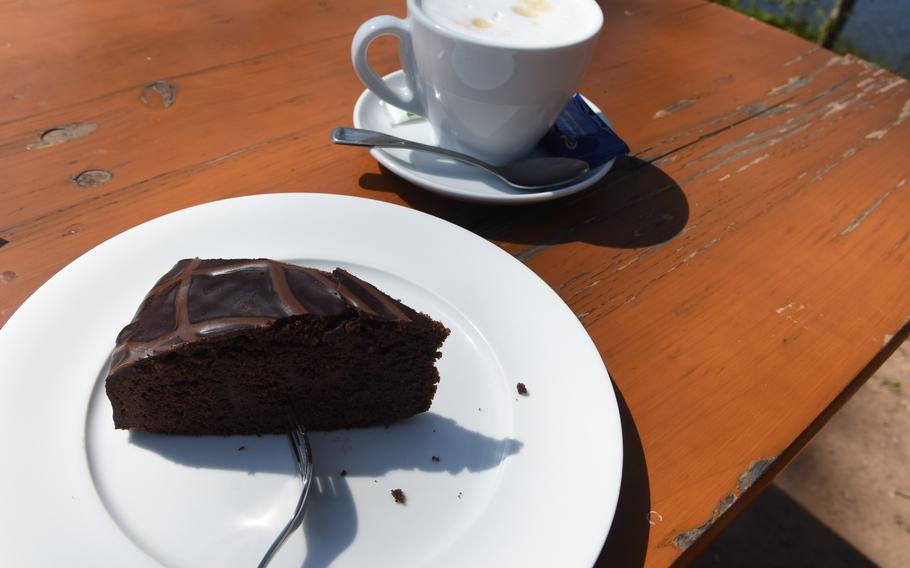 This slice of chocolate cake goes well with a cappuccino at the Peters Alm beer garden in Homburg, Germany, April 19, 2022. (Jennifer H. Svan/Stars and Stripes) 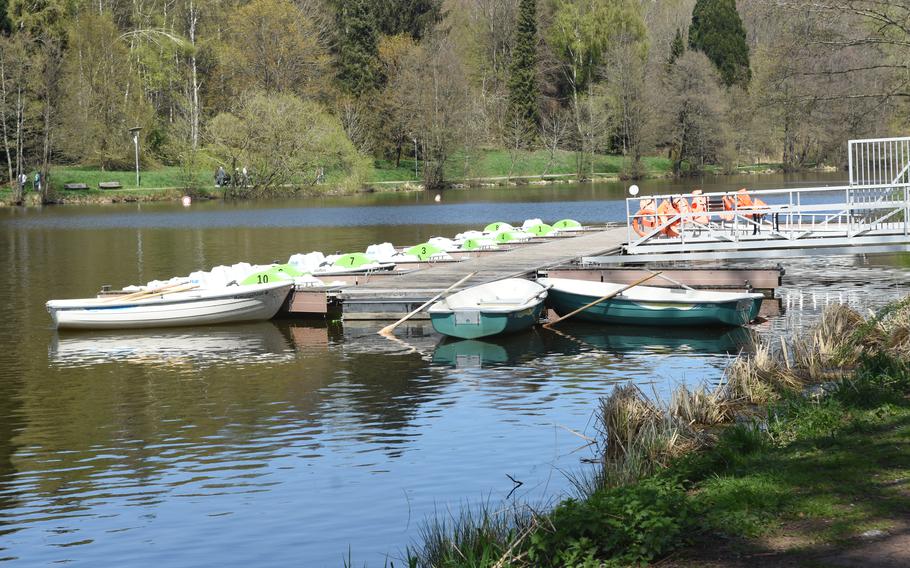 The Peters Alm beer garden overlooks Lake Jaegersburg near Homburg, Germany, April 19, 2022. Boats can be rented to take out on the lake. (Jennifer H. Svan/Stars and Stripes)

A network of hiking and biking trails circles the lake and branches into the surrounding forest. The climbing forest for kids is also within a short walking distance.

If you’re looking for more memorable food, try the hotel. I discovered the restaurant at Peters hotel only while wandering around the grounds after discarding the beer garden potato salad.

The menu was pricey but diverse. Among the offerings: carrot-and-coconut-cream soup, ravioli filled with Pecorino cheese and figs, and wild boar goulash. Outdoor seating on a shaded patio overlooks the lake.

Address and directions: Kleinottweiler Street 112, 66424 Homburg. From Kaiserslautern, take autobahn A6 toward Saarbruecken. Get off at exit 9 Homburg onto B423 toward Bexbach. After about 0.5 miles, turn right toward Jaegersburg and follow B423 for about 3.5 kilometers to the beer garden.

Prices: About 10 euros for a meal. On the cheaper end are Nuernberger bratwurst with sauerkraut for 7.40 euros; add 3.50 euros for french fries. More expensive items include steak for 13 euros and wild boar goulash with forest mushrooms for 16 euros. Cash and cards are accepted.