Masons in Kaiserslautern is global cuisine with a German accent 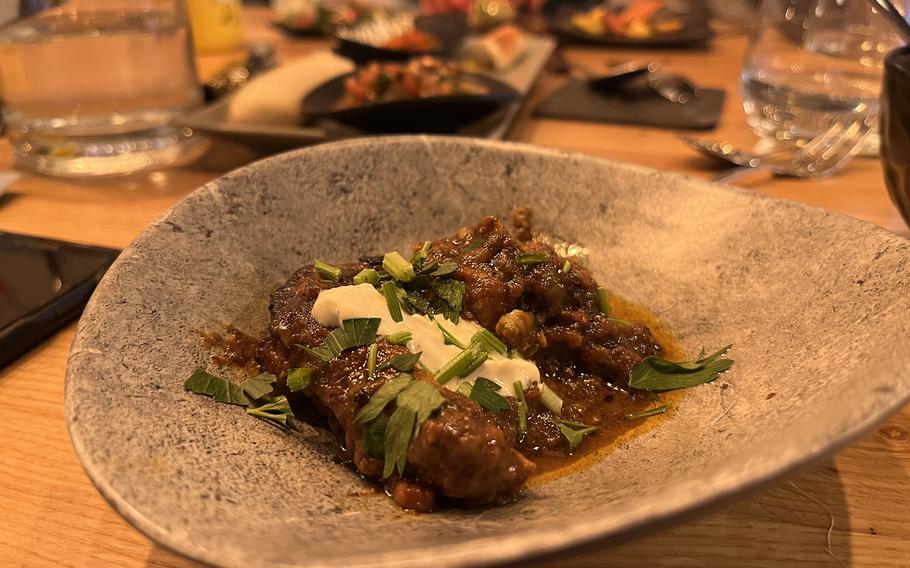 Buy Photo
One of the meatier dishes among the dozens available at Masons in Kaiserslautern, Germany. The all-you-can-eat restaurant allows you to order up to 20 small plates, but you probably won't get that far. (Erik Slavin/Stars and Stripes)

Masons bills itself as a culinary adventure around the world, complete with menus resembling passports and food listed by continent.

The experience is indeed global in scope, though it feels a little like you’re traveling in a German tour group. You can cover thousands of imaginary food miles and end up in the Americas or Australia, but the German tendency toward pork, potatoes, cabbage and cheese is never that far behind.

The Asian dishes have a few successes, though the spice levels are mostly toned down, in line with the standard-issue German palate (I’m not sure where these are issued, but I’m reliably told this by our German staffers, one of whom thinks mayonnaise is wild stuff).

Where Masons succeeds is with its fun concept. It’s a new addition to Kaiserslautern, which isn’t especially known for its restaurant scene’s creativity, unless you count slight variations on brown schnitzel sauce.

Every meal here is all-you-can-eat; the only difference is whether you order from a list of five specials, which cost one euro more. Kids 4 and under eat for free, so if you’re a single parent showing up with a horde of hungry children, you’re getting a deal. Otherwise, at 27.95 euros for dinner, consider this a splurge.

Diners have two hours to select up to 20 small plates, which can be ordered every six minutes from a tablet on your table. I found this off-putting at first until I got into a rhythm and realized that there was no way my party of three was going to order 60 plates of food.

If you’re a hungry adult, 10 or 11 of your own and a few bites from the plates of others should stuff you pretty nicely. So I relaxed, knowing that my plates were coming, though not always in the sequence I ordered them.

In two trips to Masons, I tried all of the approximately 30-40 items on the menu.

You could start off with the grilled halloumi cheese, which is delightfully squeaky and dressed with fresh greens, balsamic vinegar and olive oil. It’s tasty and it’s the adult thing to do. But that’s not what I did.

I say order the caramel ice cream first, just because you can. It’s small enough and your parents aren’t around to tell you it’ll spoil your appetite. 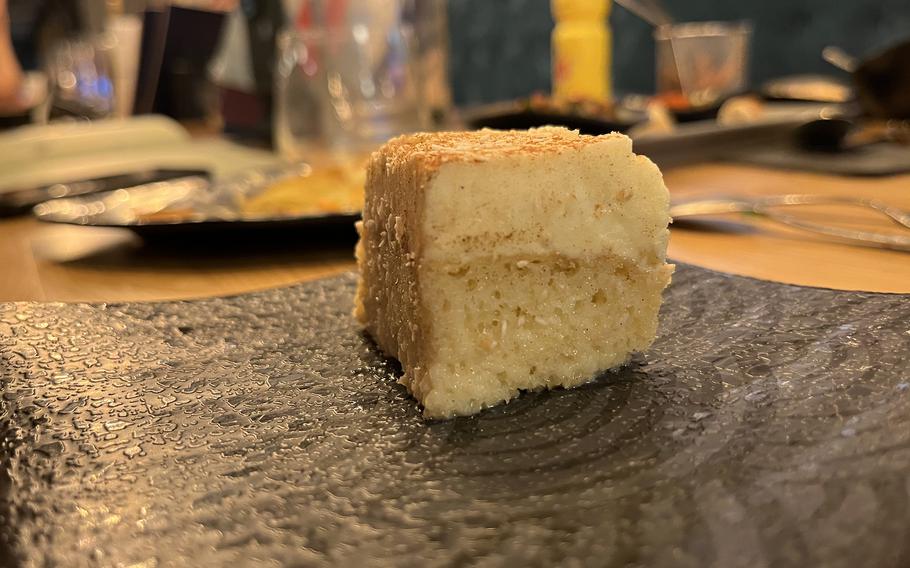 Buy Photo
The tres leches cake at Masons, billed as Peruvian, isn't as sweet as some versions found in the Americas. It's among the many small plates available at this all-you-can-eat restaurant in Kaiserslautern, Germany. (Erik Slavin/Stars and Stripes)

The Moroccan-themed Nomad Burger, with marinated meat and harissa-tinged mayonnaise, was another hit at the table. The Japanese tonkatsu was described as “reasonably authentic” by a Japanese diner, and since it’s fried pork on cabbage, it’s bound to be popular around here.

The crispy Korean mandu are worth ordering too, though they don’t much resemble the dumplings I had while living in South Korea. Like many other dishes here, they’re more inspired by the country’s cuisine than they are replicating them.

There are several dishes that focus on bacon, potato and cheese. If this combination works for you, you’ll be happy.

A few dishes missed the mark or weren’t prepared well. The flammkuchen was limp and dry, and the Kumara sweet potato fries would have tasted good if they hadn’t come out soggy. The banh mi brioche burger was the one dish with significant hot spice, but all it did was cover up the pickled vegetables and other subtleties normally found in good Vietnamese banh mi. 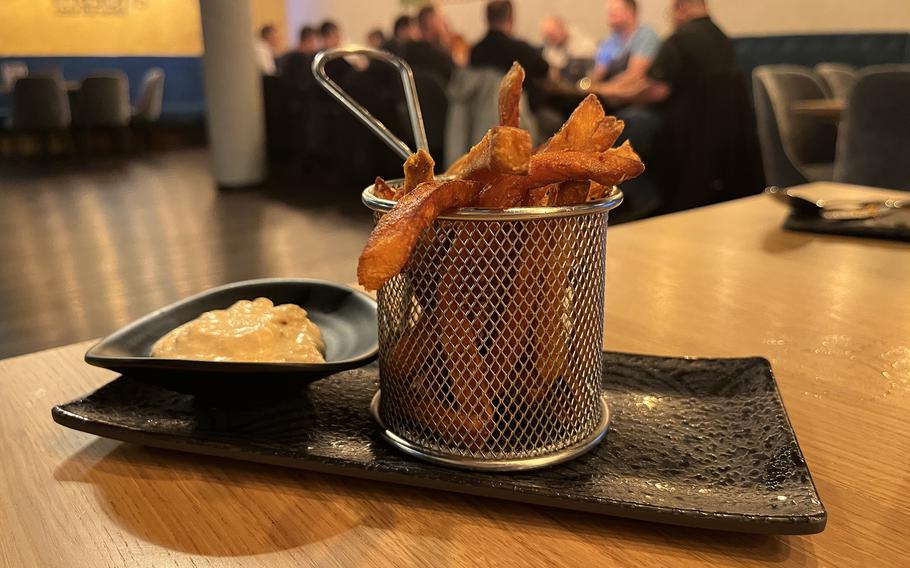 Buy Photo
The New Zealand-inspired Kumara fries at Masons in Kaiserslautern, Germany. The all-you-can-eat small plate concept gives the city's somewhat staid culinary scene something out of the ordinary. (Erik Slavin/Stars and Stripes) 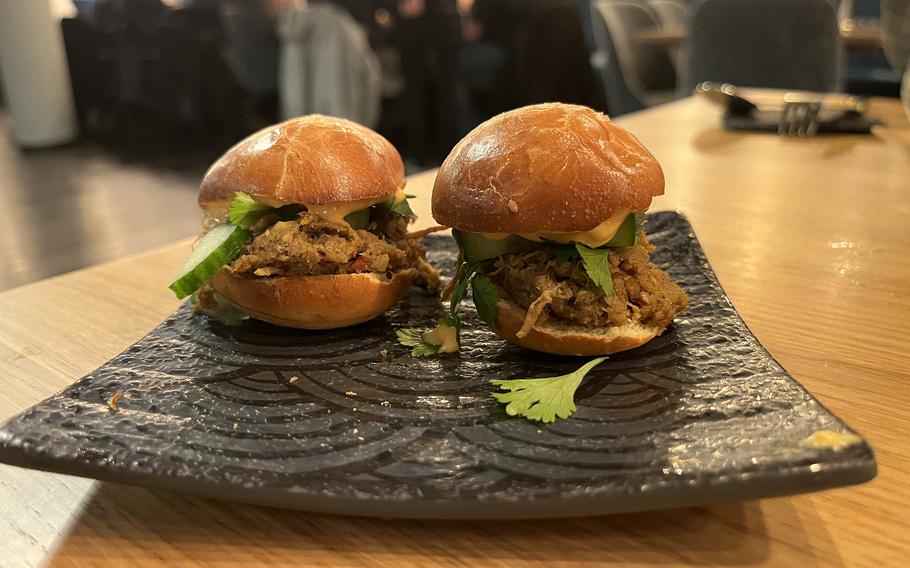 Buy Photo
The banh mi brioche burger at Masons in Kaiserslautern, Germany. The hot spice overwhelmed the more delicate flavors -- better to go with the Nomad Burger instead. (Erik Slavin/Stars and Stripes)

Fortunately, a misstep doesn’t ruin the night, because there’s always a new dish to try. 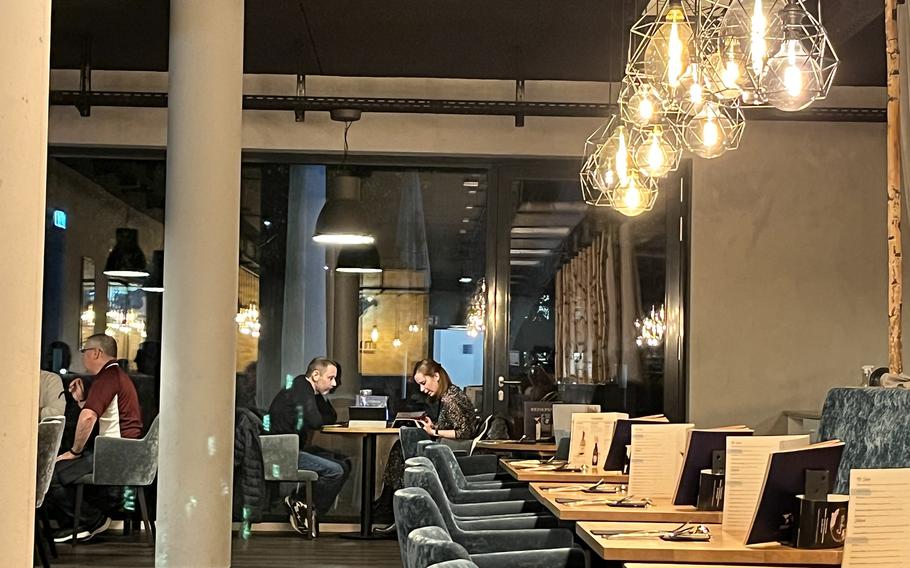 Buy Photo
Diners contemplate their next choices early on a Tuesday night in November 2021 at Masons in Kaiserslautern, Germany. (Erik Slavin/Stars and Stripes)

Address: Fischerstrasse 78, 67655 Kaiserslautern. Located on the ground floor of the Hampton Inn. There are also locations in Saarbuecken and Trier.