The fleischkaese served at the Wurst-Kuech in Kaiserslautern, Germany, is topped with a fried egg and served with spinach and boiled potatoes. The Pfaelzer Teller, upper right, is a plate of specialties from the Pfalz region. (Michael Abrams/Stars and Stripes)

Once upon a time in Germany, just about every village, town and city neighborhood had its local watering hole.

The “kneipe,” which translates to pub or bar, was where you went for a beer after work, soccer practice or a game. On Sundays after church, men would often go for a quick drink while their wives prepared lunch at home.

But in this century, and especially this decade, what is known as “kneipensterben,” or “pub dying,” has taken place, with more and more pubs disappearing from the landscape.

Changes in lifestyle and work habits, a nationwide ban on indoor smoking and then the coronavirus pandemic sounded the death knell for many establishments.

So when I found a typical neighborhood kneipe not far from the Kaiserslautern train station, I thought I’d give it a try.

The Wurst-Kuech, or sausage kitchen in English, reminded me of the pubs of long ago. A lot of wood — tables, chairs, wall paneling — and the sound of something frying in a pan somewhere. 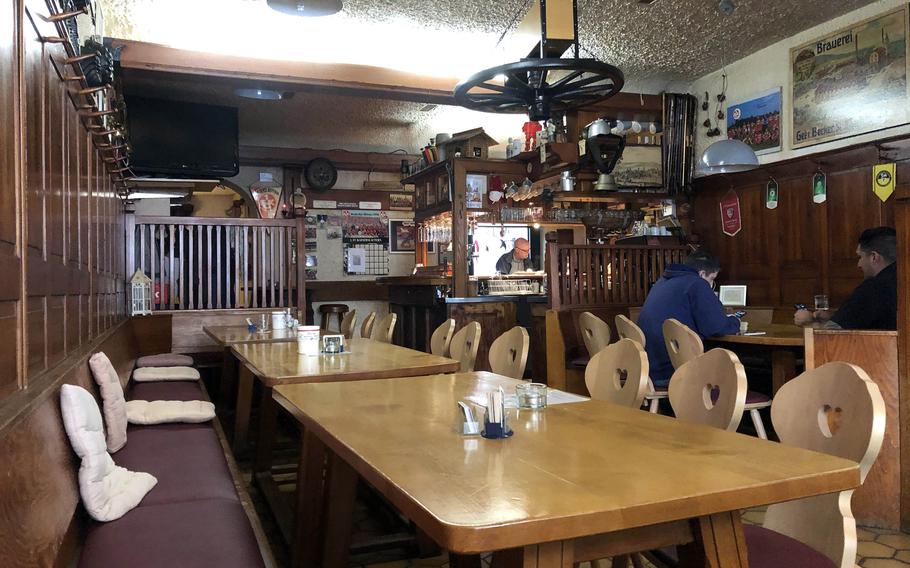 The interior of the Wurst-Kuech in Kaiserslautern, Germany, is a veritable shrine to local soccer teams, especially 1.FC Kaiserslautern. (Michael Abrams/Stars and Stripes)

Photos of local soccer teams and pennants hang on the wall, and trophies sit on shelves. Fans of the city’s top team, 1. FC Kaiserslautern, gather here before and after matches.

While a kneipe was mainly a place to drink, most served good, solid German food. You’d find schnitzel, bratwurst, rump steak — in other words, meat.

That’s what’s on the menu at the Wurst-Kuech, too.

We ordered fleischkaese, which was the daily special, and a Pfaelzer teller. The former is like a slab of fried bologna topped with a fried egg. It came with spinach and boiled potatoes. Fleischkaese was a daily special at the Wurst-Kuech in Kaiserslautern, Germany. The meat in the dish is similar to a slab of bologna. (Michael Abrams/Stars and Stripes) A wurstsalat, or sausage salad, served with roasted potatoes at the Wurst-Kuech in Kaiserslautern, Germany. It's made with sliced cold cuts and pickles in a vinegar dressing and is topped with onions. (Michael Abrams/Stars and Stripes) 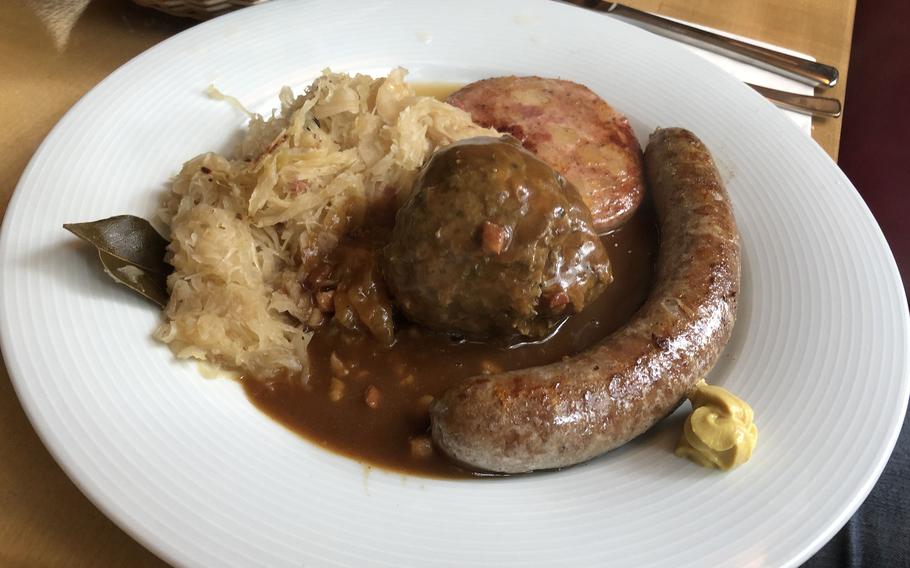 The Pfaelzer Teller at the Wurst-Kuech in Kaiserslautern, Germany, is a plate of specialties from the Pfalz region. It consists of stuffed pork stomach, a liver dumpling and a bratwurst served with sauerkraut and bread. (Michael Abrams/Stars and Stripes)

The latter is a plate of specialties from the surrounding Pfalz region. It featured stuffed pork stomach, a liver dumpling and a bratwurst served with sauerkraut and bread.

Everything was delicious. The meats were spicy in a peppery way, the sauerkraut tangy. Only the boiled potatoes were a little plain. We washed it down with Karlsberg beer from nearby Homburg.

On a follow-up visit, I tried the wurstsalat, or sausage salad. It is made with sliced cold cuts and pickles in a vinegar dressing, topped with onions and served with fried potatoes. Very satisfying.

But not all is meat here. There are several vegetarian items on the menu, including a vegetarian schnitzel and a mushroom omelet.

And you don’t have to drink beer, either. The Wurst-Kuech has a large selection of wines from the Pfalz, Germany’s second-largest wine-producing area.

We had a good time, reminiscing about kneipen where we once hung out that are no longer around, and enjoying this one, which still is. The Wurst-Kuech in Kaiserslautern, Germany, is a typical German pub that serves staples of local cuisine. (Michael Abrams/Stars and Stripes)

Information: Online: wurst-kuech.de. Menus have English translations. There is a separate room for smokers. Daily specials Monday through Friday. Outside area in the summer.