An active adventure across the Azores 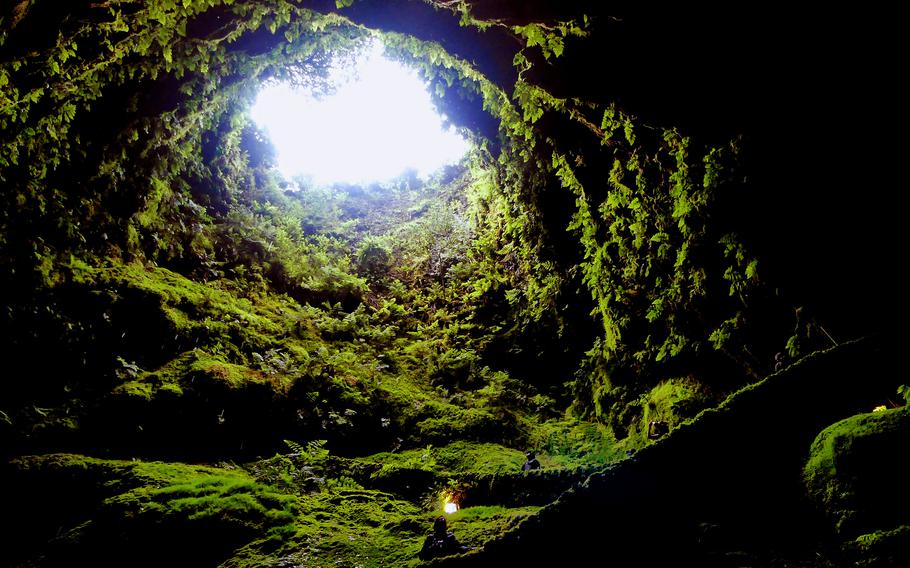 Visitors hike down the lava tube in the Algar do Carvão volcanic cave on Terceira in the Azores. (Bob Drogin/For The Washington Post)

We had arrived an hour early, but the main street of Doze Ribeiras, a normally sleepy village on the flanks of a volcano on Terceira Island in the Azores, already was hopping with activity.

Vendors hawked ice cream while a marching brass band tuned up. Families crowded onto wrought-iron balconies. Men spilled out of a bar, drinking beer by a stone wall. We found a safe spot behind a wooden fence. An ambulance parked discreetly on a side street.

Then, right at 6:30 p.m., a firework boomed to start the night’s running of the bulls. Moments later, a massive black bull came down the street, its hoofs clattering. The pastores, six men in white blouses and black hats, struggled to cling to a very long rope tied to his neck. 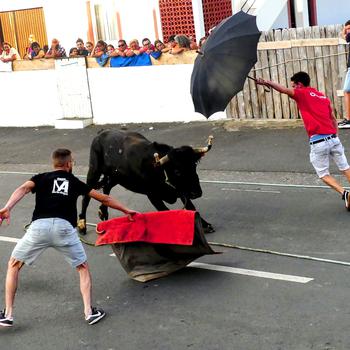 Amateur bullfighters try not to get gored during the running of the bulls in the Doze Ribeiras village. (Bob Drogin/For The Washington Post)

Two men began playing matador, waving a black umbrella and a red cape in the bull’s face before darting away. A dozen or more men teased it from farther away. They scattered when the bull lowered its partly sheathed horns and charged. Onlookers cheered when it nearly gored someone, and jeered when it sent its tormentors leaping over fences.

After 20 minutes or so, the bull trotted back up the street, and soon another was released. One man fell in the melee, but the bull was distracted, and no one was hurt. And although the third bull angrily butted a wooden gate to splinters, he showed no sign of injury.

Touradas à corda, or rope bullfights, are a wildly popular tradition in Terceira. They occur every night in different towns from May through October; 65 were scheduled in August alone, four just on the Monday we were there. And although we knew that no bulls are killed, even in the ring, the experience, which fell about midway through our trip, struck perhaps the only discordant note during our 10-day getaway to the Azores in August.

The archipelago was never high on my must-see list. But during the pandemic, we have tried to avoid crowds. So hiking, diving, caving and other activities on secluded volcanic islands 900 or so miles from the rest of Europe seemed to be just the ticket.

We thoroughly enjoyed our first week on São Miguel, the largest of the nine islands. But I did not fully appreciate how unique the Azores were until we caught a local flight to Terceira, the third-largest island, home of those bullfights — and one of the few places in the world where you can climb down a lava tube.

Unlike limestone caves in the United States, the Algar do Carvão grotto was created when superheated magma pushed to the surface some 2,000 years ago. It retracted deep into the earth after the eruption, leaving a chimney in the older, harder trachytic rock. (In “Journey to the Center of the Earth,” Jules Verne imagined a similar tube led, well, to the center of the Earth.)

After paying an $8 entrance fee, we entered a dank access tunnel that led to a steep path in the near-vertical tube, now lined with lush mosses and ferns. Stairs led 330 feet down into a dimly lit cavern with a small rain-fed lake and a multicolored domed vault.

A guide near the bottom explained that water dripping on iron oxides and manganese had created the dome’s vivid curtain of red, orange and green. Milky white stalactites and glassy black ones, sharp as blades, hung from above. It was eerie and beautiful.

The next day, we took a hike, called the Mistérios Negros, that was just as unusual. The trail wound through fields of heather and stands of Japanese cedar, then down muddy ravines into dense juniper and myrtle, past three small lakes and finally over jagged black lava — the source of the trail’s odd name, black mysteries — with stunning views of the sea. We emerged tired but happy after four hours.

Our hotel, the Caparica Azores Ecolodge, had a similar rugged vibe. We arrived after dark and needed flashlights to haul our bags up a steep trail to our jungle lodge. I was sweating and noticed it had no air conditioning. My wife noticed it had no bathroom door. But it was private, and sliding doors allowed for a cool breeze and the constant chatter of birds. It was lovely, like living in a treehouse.

I had downloaded guidebooks but barely used them. The desk clerk, Domonique Haasnoot, took pains each day to mark my maps, offer outing suggestions and making dinner reservations. One day, she offered to prepare a charcuterie picnic for lunch. We opened her wicker basket that afternoon to find enough food for the next day, too.

At her suggestion, we went for dinner at O Cachalote in Angra do Heroísmo, a city so rich in history and architecture that its central zone is a UNESCO World Heritage site. We arrived in time to see the setting sun turn the massive Fortress de São João Baptista a golden red. It dates back to the 16th century, one of about 40 forts that once protected the island.

O Cachalote means sperm whale in Portuguese, but whale is not on the menu. The waiter told us to order the house specialty — tenderloin steak grilled at the table on wood-fired rock — and his favorite red from Portugal’s famed Douro Valley. I noticed the other tables had the same fare. The softball-sized steaks proved astonishingly tender, and the wine was fruity but smooth. The waiter smiled approvingly when I asked for local pineapple for dessert, and said we could come back. The bill was $78.

São Miguel Island was more developed than Terceira. But even in August, it was deserted compared with most of mainland Europe. I saw more tractors than cars on some roads.

Mostly, I saw miles of hydrangea bushes ablaze with purple, pink, blue and white blossoms. They line the narrow roads and form gaudy hedges up and across valleys and hills, like stone walls in New England. Back home, deer have devoured my hydrangeas, so I asked the secret.

“It’s the volcanic soil,” explained Luis Sousa, who led us on a quad bike tour to the Sete Cidades caldera. “It’s so rich that farmers just plant sticks in a line, and they grow to separate the fields and keep the cows in. They’re everywhere now and are considered an invasive species.”

Our convoy of six quad bikes rumbled up the hydrangea-lined roads to a 15-mile path that circles the vast crater rim. Thick clouds parted as we crested the top, and a silvery light glimmered on the turquoise lake and green fields far below, a sight we otherwise would have missed.

Sete Cidades is one of three volcanoes on São Miguel, and one of 26 active volcanoes in the Azores. Because they rise from the deep sea floor, they are technically among the highest on earth. The islands sit atop the Mid-Atlantic Ridge, where tectonic plates from North America, Eurasia and Africa diverge, allowing magma to rise.

One afternoon, I hiked alone into the Fogo caldera, in the center of São Miguel, on a trail so steep that a long wooden ladder is installed on a particularly nasty stretch. From the pumice beach at the bottom, swirling mists gave the lake an otherworldly air. Reality intruded when I climbed back up and found a $30 parking ticket on my rental car. 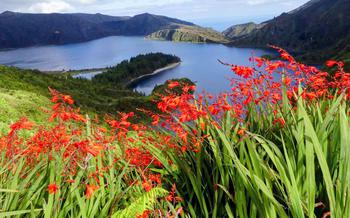 Coppertips bloom on the sides of the Lagoa do Fogo volcanic caldera on São Miguel. (Bob Drogin/For The Washington Post)

Many visitors go to the third volcano, Furnas, to soak in murky iron-rich thermal springs and eat cozido das Furnas, a mix of blood sausage, pigs’ ears and other goodies cooked in steaming fumaroles. Neither appealed to us. So we hiked an hour through a mossy forest to the Salto do Prego waterfall, and after climbing to the rapids above the falls, I jumped into a rocky pool to cool off. 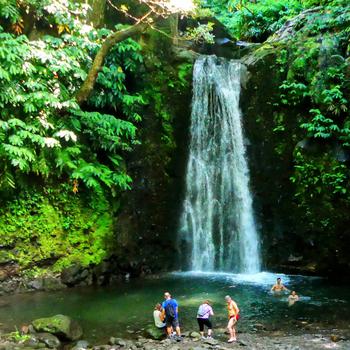 Hikers cool off beneath the Salto do Prego waterfall on São Miguel. (Bob Drogin/For The Washington Post)

I had not scuba-dived in years, but I figured it was like riding a bike. So one morning, I signed up for an offshore dive with Season Challenge in Ponta Delgada, the Azores’ capital city. The staff gave me a wet suit, tanks and other gear, and I soon joined a dozen divers in the boat.

We first dropped to a volcanic reef rich with marine life about 45 feet down. We swam under a rock arch and through a short tunnel as damselfish and ornate wrasse glided by in a mesmerizing parade. A green moray eel poked out of the rocks, and a barracuda hunted overhead.

After a break, we dived on the wreck of the Dori, a cargo ship that was in the D-Day invasion in World War II and later sank here in 30 to 60 feet of water. The ghostly remains draw swirling schools of fish, and a propeller and boilers poke out of the sand.

Thanks to its location and prevailing winds, the Azores have attracted sailors since the age of Spanish galleons, Portuguese caravels and the voyages of discovery. (It’s said that Columbus stopped here to repair the Niña after “discovering” America.) Perhaps the most important waterborne visitors these days are whales and dolphins. Scientists say about 25 of the 90 or so known species of cetaceans migrate through the Azores’ waters. Several companies run daily boats from Ponta Delgada to see the leviathans just offshore.

We went with Picos de Aventura, and minutes after leaving the marina, the 20 people aboard our rigid-hulled inflatable boat oohed and aahed as dolphins leaped out of the water beside us in twos and threes like aquatic ballet dancers.

The guide announced that a dorsal fin far off the bow was a minke whale, but I only saw a splash. Later we followed low-flying shearwaters to a sperm whale resting on the surface, its black back as big as a bus. It submerged without showing its flukes, disappointing the photographers onboard.

When we had first arrived on São Miguel, we were too early to check into our hotel, Sul Villas & Spa, which overlooks the black-sand beach in Lagoa. So we wandered the town’s narrow cobblestone streets. It is a picture postcard kind of place, with homes painted ocher and red, yards bursting with purple bougainvillea and long breakers rolling ashore. 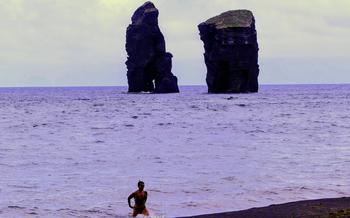 Lava rock formations rise out of the sea near the black-sand beach at Mosteiros on São Miguel. (Bob Drogin/For The Washington Post)

When we got to the port, we ducked into Borda D’Água for lunch. The waitress found us a table outside and sized us up as hungry. Unbidden, she returned with a starter platter of local cheese, crab salad, octopus in oil, a pork pâté and fresh bread. We ordered boiled shrimp and our first grilled limpets with garlic and oil, a local specialty. The mollusks were flavorful but chewy and crunchy (because they have tiny teeth). Including sparkling wine, cortados and passion fruit mousse, our bill came to $35.

For dinner that night, we drove several towns over to Bar Caloura, famous for its grilled fish. We tried the trigger fish and barracuda, $17 each, and both proved meaty and succulent. Our table overlooked a rocky cove, a full moon overlooked us, and the remoteness of the Azores did not bother us a bit.