Oktoberfest is back but inflation hits brewers, cost of beer 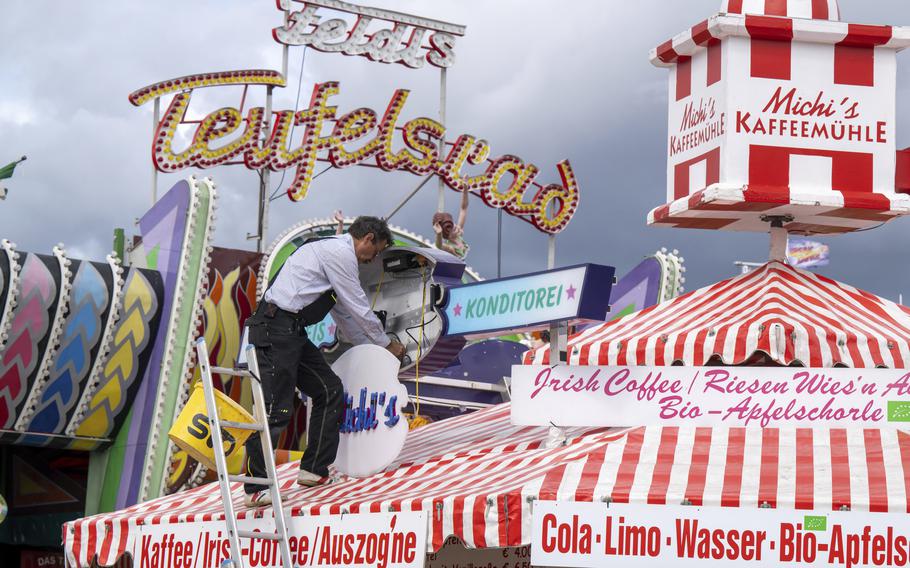 A man mounts a light advertisement Sept. 15 on a booth on the Oktoberfest grounds in Munich, Germany. The Oktoberfest is on tap again in Germany after a two-year pandemic interruption. But brewers and visitors are under pressure from inflation in ways they could hardly imagine in 2019. (Peter Kneffel/AP)

Oktoberfest is back in Germany after two years of pandemic cancellations — the same bicep-challenging beer mugs, fat-dripping pork knuckles, pretzels the size of dinner plates, men in leather shorts and women in cleavage-baring traditional dresses.

But while brewers are more than glad to see the return of the Bavarian capital's sudsy tourist centerpiece, both they and visitors are under pressure from inflation in a way that could scarcely be imagined the last time it was held in 2019.

The event opens at noon Saturday when Munich's mayor taps the first keg and announces “O'zapft is,” or “It's tapped” in Bavarian dialect.

For Germany’s brewers, rising costs go much deeper than simply the price of a round at the festival's long wooden benches. They are facing higher prices all along their chain of production, from raw ingredients like barley and hops to finishing touches such as beer caps and packing material. 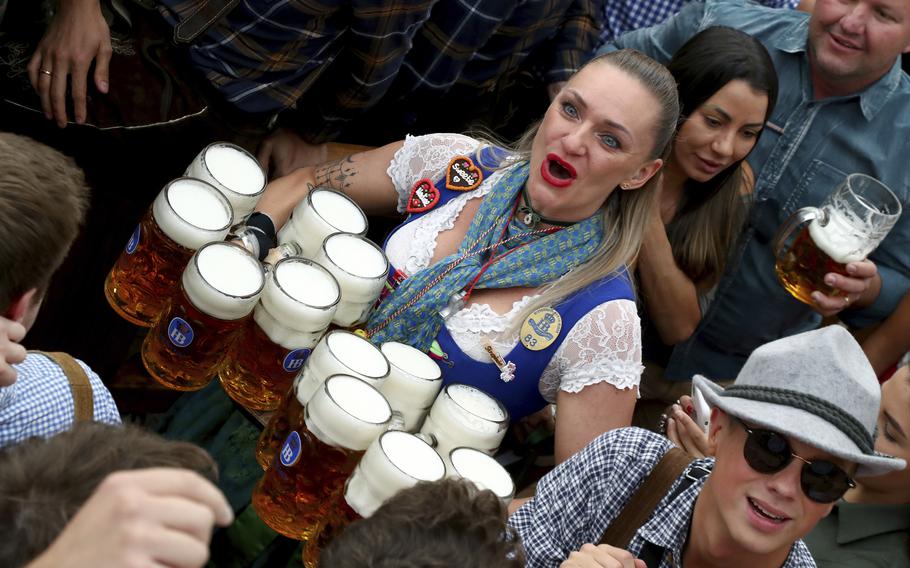 A waitress holds twelve glasses of beer during the opening of the 186th ‘Oktoberfest’ beer festival in Munich, Germany, on Sept. 21, 2019. (Matthias Schrader/AP)

It's a mirror of the inflation running across the economy: Sky-high natural gas prices caused by Russia's war in Ukraine are boosting what businesses and consumers have to pay for energy, while recovering demand from the pandemic is making parts and raw materials hard to come by.

Brewing equipment is often fueled by natural gas, and prices for barley malt — or grain that has been allowed to germinate by moistening it — have more than doubled, to over 600 euros a ton. Glass bottles have risen by 80%, as glassmakers pay more for energy. Bottle caps are up 60%, and even glue for labels is in short supply.

“Prices for everything have changed significantly this year,” said Sebastian Utz, head technician at Munich's historic Hofbraeu Brewery, which traces its roots in the city to 1589. “To brew beer you need a lot of energy ... and for refrigeration. And at the same time, we need raw materials — barley malt, hops — where procurement has increased in price.”

The costs of everything — cardboard, stainless steel for barrels, wood pallets, cleaning supplies to keep the brewing tanks spotless — have gone up.

“These are prices that the German brewing industry has never seen before,” said Ulrich Biene, spokesman for the historic family-owned Veltins Brewery in Grevenstein, which is not one of the brands sold at Oktoberfest.

Inflation hit an annual 7.9% in Germany in August, and a record 9.1% in the 19 countries that use the euro currency. Rising consumer prices in Europe have been fueled above all by Russia restricting supplies of natural gas, driving prices through the roof. That feeds through to electricity, because gas is used to generate power, and to the cost of a host of industrial processes that run on gas, such as making fertilizer, glass and steel. Farmers also are seeing higher costs for heating buildings and fertilizing crops.

All that gets built into the prices of things people buy, and those higher prices cut into their purchasing power.

Inflation is “running red hot in Germany" and could approach 10% by year's end, said Carsten Brzeski, chief eurozone economist at ING bank. The rate should fall next year as consumer demand weakens — but that is small consolation today.

In any case, Oktoberfest is a much-needed boost for Munich's hotels and food service industry. 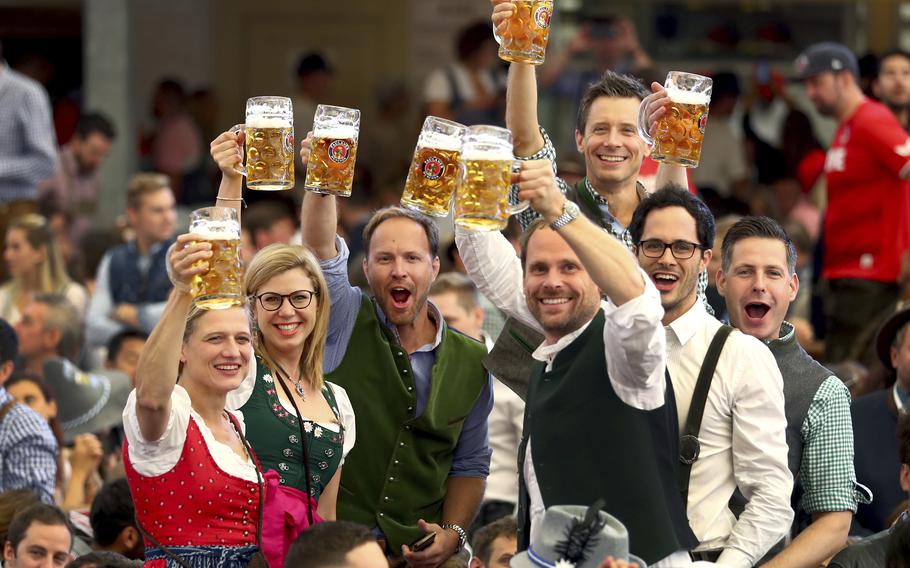 Visitors lift glasses of beer during the opening of the 186th ‘Oktoberfest’ beer festival in Munich, Germany, on Sept. 21, 2019. The beer will be just as cold and the pork knuckle just as juicy. But brewers and visitors are under pressure from inflation in ways they could hardly imagine in 2019. (Matthias Schrader/AP)

“It's beautiful,” Mayor Dieter Reiter said. “You can see the enthusiasm has returned.” He downplayed concerns about such a big event during the pandemic, saying the spread of COVID-19 is “no longer the decisive factor” and adding, “Let's see how it goes.”

Some 487 beer breweries, restaurants, fish and meat grills, wine vendors and others will serve revelers at Oktoberfest, and opening hours will be even longer than in the past, with the first beer tents opening at 9 a.m. and closing at 10:30 p.m. The last orders will be taken at 9:30 p.m.

In the years before COVID-19, about 6 million people visited the celebrations annually, many of them dressed in traditional Bavarian garb — the women in Dirndl dresses, the men in Lederhosen, or knee-length leather trousers.

Oktoberfest, first held in 1810 in honor of the marriage of Crown Prince Ludwig of Bavaria to Princess Therese, has been canceled dozens of times during its more than 200-year history due to wars and pandemics.