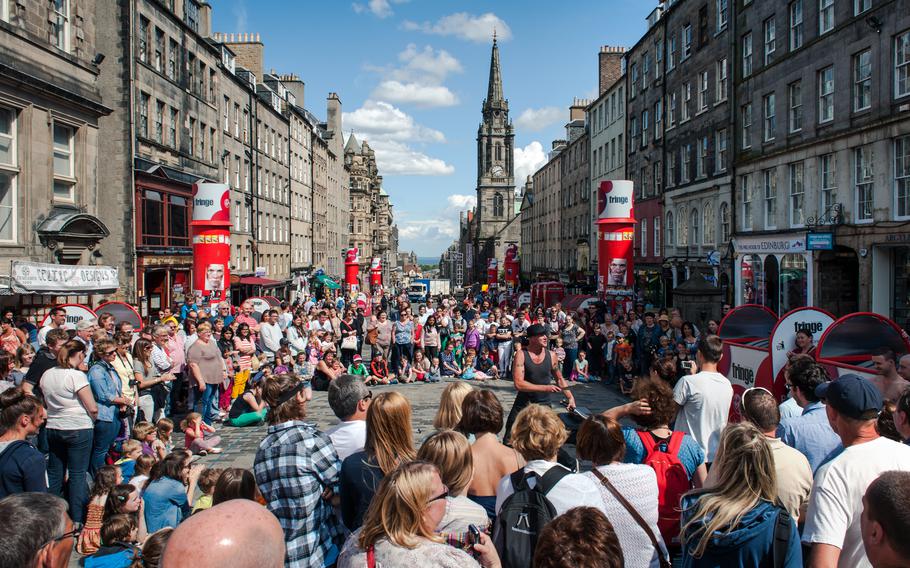 The Royal Mile in Edinburgh, Scotland, will be chock-full of people through August as the Festival Fringe cranks up. (iStock)

In a matter of days, more than 2 million culture-hungry visitors are expected to descend on Edinburgh.

It's the first full-scale celebration of the Edinburgh International Festival and the Edinburgh Festival Fringe in three years. The international festival is going strong 75 years later -- look out for a performance by jazz icon Herbie Hancock -- but it' s the Fringe that attracts the vast majority of visitors. In 2019 more than 3 million tickets were issued, making it the world's largest arts festival. Famous names who cut their teeth at the Fringe include Steve Coogan and Phoebe Waller-Bridge: "Fleabag" had its first airing at the Fringe in 2013.

Now, for nearly a month starting on August 5, Edinburgh will host an array of talent from all over the world, with venues ranging from the 2,200-seat Usher Hall to the back of a taxi; impromptu street performances will spring up everywhere. 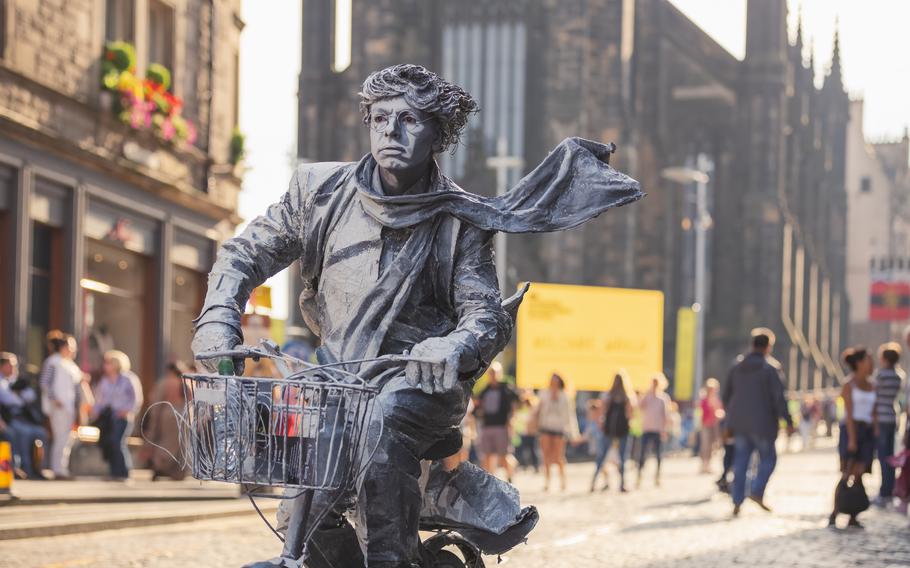 A street performer poses as a living statue in front of Tollbooth Kirk on the Royal Mile during a past version of the Edinburgh Festival Fringe. (iStock)

For the city, the importance of the festival is not just artistic: In 2019 the London-based Centre for Economic and Business Research estimated that the Festival generates more than £1 billion of direct and indirect spending each year.

A sizable chunk of that money is spent on the food and drink required to power through the shows. With a couple of million more mouths to feed, Edinburgh's bars, restaurants, and coffee shops will be packed. Reservations are essential for most places, but there are always cancelations, especially during a dynamic time like the festival. If you can't snag a table, try the time-honored approach of calling, or walk in and check the standby situation. Here, then, are the best places to refuel, whether you're in search of a blowout meal, or a shot or two of restorative local whisky.

Dean Banks, the chef-owner of Dulse, is a busy guy in Scotland: Besides running multiple spots, such as Haar in St Andrews and Pompadour in Edinburgh, he's launched his own brands of gin and vodka. His latest project is Dulse, a dressed-down wine bar and fish restaurant in the West End, named for the seaweed found in the North Atlantic. But the menu revolves around not only seaweed, as the name suggests, but also seafood: There's trout pastrami with rye bread and market-price local lobster thermidor. To wash it down, there's pepper dulse martinis, made with Banks' infused gin.

The Little Chartroom has been an Edinburgh mainstay since 2018. This year, chef and restaurateur Roberta Hall McCarron moved the restaurant and launched Eleanore on the original Albert Place site. At the relaxed restaurant and wine bar with nautical blue-and-white decor and high, backless stools, dishes range from small-plate to substantial: mackerel paired with tangy yuzu, an audacious plate of barbecued monkfish and crisped lamb's sweetbreads with carrot hot sauce, or charred loin of pork with quince and chicory for £21 ($25). It's a great place to hang out for a drink during the day, even when the kitchen is closed; the extensive wine list changes frequently.

Housed in an attractive, high-ceilinged old Victorian warehouse, Timberyard has a strong Scandinavian vibe both in the space and on chef Ben Radford's menu. Radford serves wild garlic broth sharpened with tangy St Andrews cheddar, and features game in dishes such as roe deer flatbread with fines herbes and yogurt, as well as wood pigeon with quince, lardo, and anchovy for £28 ($34). The wine list is European, but cocktails have a local bent: Bloody Marys are infused with smoked barley.

Tom Kitchin is restaurant royalty in Edinburgh -- the Kitchin has held a Michelin star for 15 years. Kora, the latest addition to his clutch of eateries, is informal and relaxed: a quirkily decorated, bare-brick and blond-wood townhouse with small plates and bar snacks on offer (spiced broccoli tempura or salt cod brandade, maybe), as well as starters and mains, such as Shetland mussels in cider for £11 ($13) and plancha-grilled Newhaven lobster with garlic and parsley for £49 ($60). The mostly Old World wine list offers 30 or so bins by the glass.

The cavernous, 300-cover Bertie's, housed in an old church on bustling Victoria Street, is one of the city's top fish-and-chips spots and a great option if you're in the middle of town without a restaurant booking. The classic order is a plate of sustainable, MSC-certified North Sea haddock, battered and fried in beef drippings, served with chips and tartare sauce for £15 ($18); options include Whitby scampi fried in breadcrumbs, or battered local haggis. For the full fish-supper experience, tag on side orders of chippy gravy and mushy peas.

A stalwart of the Edinburgh dining scene since 1979, the Witchery hosts a well-mixed crowd of locals, visitors, and fans of Gothic interiors: Timeworn tapestries, candlelight, and oak paneling set the tone. The menu focuses on first-rate local produce: baked Isle of Mull scallops for £25 ($30), and fillet of roe deer from the Balmoral Estate cooked en croûte for £87 ($160) for two. The 900-bin wine list features a string of heavyweight mature clarets: Château Lafite-Rothschild 1990, for instance, goes for £1,350, or a little more than $1,600.

Tipsy Midgie, in Southside just by Holyrood Park, describes itself as a "whisky and gin drinkery." Presided over by restaurateur Colin Hinds (aka the Whisky Forager), it's a stone's throw from the visitor-friendly Holyrood Distillery and offers a vast array of whiskies. In August, Festival patrons can unwind for an hour after a show with three "midnight drams": rare bottlings from his own collection, chosen by Hinds, kicking off with Macallan Concept No 1, Ardbeg 22 year-old and anCnoc 18 year-old, for £25 ($30) for ticketed tastings.

In recent years, locals have developed a penchant for gin. There are more than 40 different bottles behind the bar at Bramble, named in homage to bartending legend Dick Bradsell's Bramble -- a concoction of gin, lemon juice, simple syrup, and the blackberry liqueur crème de mûre. The hardest part about a late-night drink in this cozy cellar bar is finding the place: Look for the small brass plaque below a dry cleaner's shop.

Outside the city center, the 20 or so studios at Custom Lane, overlooking the Water of Leith, house designers, architects, photographers, and artists, many of whom also frequent Williams & Johnson, the building's in-house coffee roasters. "Willie Jay's," as it's known to locals, specializes in seasonal small-batch, single-origin coffees, roasted on site, and served in their airy cafe, where espresso goes for £2.40 ($3) and pour-overs and mochas are £3 ($3.60). Or get your coffee to go and stroll around the famed Old Leith Harbour in between shows.