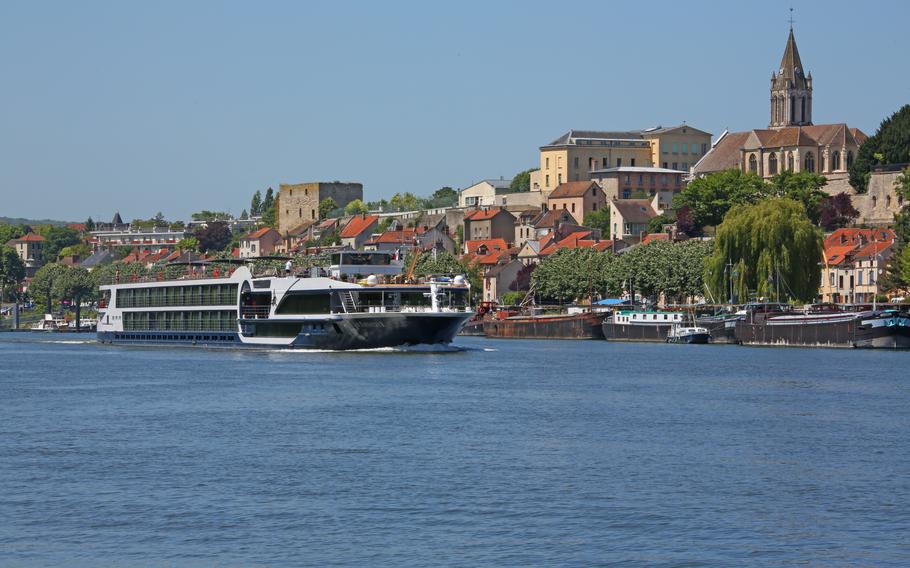 “We’ve been waiting for you” was the common theme among our cabin crew, bartenders, waiters, tour guides and the Tapestry II River Boat captain. It had been two years of waiting for the riverboats to take to the water since the boats were shut down for the pandemic.

The staff and crew (and the travelers) were ready for an adventure – an eight-day cruise from Paris to Normandy, with stops in Veron, Giverny, Les Andelys, Caudebec, Normandy Rouen, Conflans and Auvers-sur-oise. Our temporary home was a 361-foot riverboat hosting a little more than 100 passengers and 37 crew members. The design of the boat and the staterooms bring the river inside with full panorama windows and open-air balconies to bring the sights and sounds of the river scenery to life.

The cruise down the Seine River starts and stops in the City of Lights, Paris.

This was our riverboat onboard welcome and reception. The boat traveled mainly at dinner or overnight, so we were ready to go early in the mornings. Each day, we were greeted with a full buffet breakfast; at lunch (back on the boat), you could have a full menu meal or a light lunch in the lounge, and dinner was always a five-course meal. The food alone was worth the price of the cruise. Lunch and dinner come with complimentary wine and beer. The following is just a highlight of our adventures on the Seine River. I definitely recommend taking this trip.

Every day, we had choices of a couple of different tours to take in the morning and some optional tours in the afternoon. We chose a short excursion to Giverny to see Claude Monet’s home and gardens. Monet bought a strip of marshland from his neighbor and diverted a stream to create a water-lily garden. These are the Japanese gardens Monet made famous with his paintings of the free-flowing pond with lily pads, willows, iris, bamboo, and a Japanese bridge. The gardens in front of his house have rows of vibrant color schemes — purple, red, yellow, pink, orange, and white. Monet used natural light within these rows to create canvasses with his hallmark Impressionism style of broken paint strokes. Our guide told us that if you squint your eyes and look over the gardens, you can see what Impressionist painters see – the color, light and movement. Being in the garden felt like we entered a Monet painting. It was surreal and magical.

Here we got a taste of Normandy’s Ancient Abbeys – more than 100 medieval Benedictine and Augustine abbeys and churches built along the Seine. Dating more than 1,000 years old, we explored one of the wealthiest Benedictine Abbeys of the centuries, Jumieges Abbey. We walked through the remains and marveled at their beauty. These abbeys endured regular attacks starting with Viking raiders and continuing during Williams the conqueror reign, Wars of Religion and the French Revolution.

We started the day at Point du Hoc, a 100-foot cliff overlooking the English channel. The elite team of U.S. Army Rangers scaled the cliff, fought for two days and captured the area from the Nazis. The grounds were filled with giant battle-scar craters from the bombs, and some of the Nazi bunkers were still in place. Looking out over the cliff, you can imagine the hardship of the rangers as they fought the Germans. During the visit, we learned that on May 5 of this year, the symbol of the Normandy landing, Pointe du Hoc, a rocky outcrop icon, had partly collapsed and washed away. It is sad to see history fading away into the sea.

The next stop was the Normandy American Cemetery, which holds the remains of over 9,000 American military heroes killed during the Normandy invasion. Walking the cemetery with reflection pools and rows of white crosses is very moving. As we walked the grounds, I found five headstones from Minnesota and many unknown soldiers whose monuments read, “HERE RESTS IN HONORED GLORY A COMRADE IN ARMS KNOWN BUT TO GOD.” I left the cemetery wondering about their lives and families. I had grandfathers in WWI and WWII, but neither were in Normandy.

From the Normandy American Cemetery cliff, we could see Omaha Beach; it was big and alive with people, dogs and horses. When we got to the beach, my sister and I took off our shoes, ran to the ocean and dipped our feet in the cool water, thinking about the soldiers advancing to shore.

Rouen is one of Normandy’s capitals and the site of Saint Joan of Arc’s martyrdom. The medieval city is known as the city of hundred spires, pointing high into the sky with the gothic structure of Cathedrale Notre-Dame de Rouen and Episcopal Palace. In the middle of town, the working medieval astronomical clock tower shows the imagination of the clock builder of the time.

In Old Market Square, we could envision the executions and hot flames of Joan of Arc’s burning on the stake. Joan of Arc was a heroine in France until she was captured and traded to the English; she was convicted as a heretic and executed at age 19. Five hundred years later, the Roman Catholic Church named her a saint. Joan of Arc’s presence in the city of Rouen is marked by a church and a statue named for her — signs that her legacy will last forever.

We visited Auvers-sur-Oise, the final home and resting place of post-impressionist painter Vincent Van Gogh. Upon arriving in Auver-sur-Oise, we headed up the road and walked the wheat fields that Van Gogh made famous with his curved brush stroke, creating movement and energy in the “Wheat Field with Crows,” believed to be his final painting.

The iconic, tortured artist had moved there after being discharged from the asylum. Van Gogh, plagued by self-doubt and mental illness, was broke; his younger brother Theo took care of him by sending him money and managing his paintings. Van Gogh rented a room in a tiny inn called Auberge Ravoux. The inn and his room are still there and available for touring.

It has been discovered that some of Van Gogh’s canvases were made from the dish towels at the inn, and the inn’s name was visible on the sides of the painted canvases. There are a couple of theories surrounding his death; the main story is he decided to end his life and shot himself in the stomach in the wheat field. After being shot, he managed to walk back to his room at the inn and died two days later with Theo at his side at age 37. Van Gough died believing his life’s work was a failure. The grave sites for both Vincent and Theo are in the town cemetery.

This was our day to visit the iconic sites of Paris like the Louvre, Eiffel Tower, Notre Dame, Arc de Triomphe and Opera Garnier. We tried to get into the Eiffel Tower, but it was a three-hour wait – if you are interested, make a reservation ahead of time.

We sadly disembarked from the boat and headed to London.

There is much more to share about our eight-day riverboat adventure, but only so much room to write about it. It was a two-year wait for the journey, but worth every minute.