Up in the Bavarian Alps, trails and spirits are elevated This June 28, 2022 photo shows the rocky landscape in the Berchtesgaden National Park in Germany, a popular area for hiking. (Mike Eckel/AP)

At 23 minutes before midnight, at 1,703 meters (5,600 feet) above sea level, the lashing rain and furious winds outside the darkened bunkroom prompted two questions to turn over in my head: Will the roof of this hut be ripped off in the dead of night? Will I be able to continue my ridge trek to my next destination on the German-Austrian border the next day?

And so at dawn, I trekked out, up through the undercast clouds.

The reward was the majesty of the Bavarian Alps, showering glory upon those willing to hike serious trails, and maybe endure copious amounts of apricot schnapps in the company of hearty German hikers.

This is Berchtesgaden, a national park in southeastern Germany, wedged into a thumb of land poking into Austria. The Alps slash the skies, in jagged granite and knife-drops into sudden valleys. 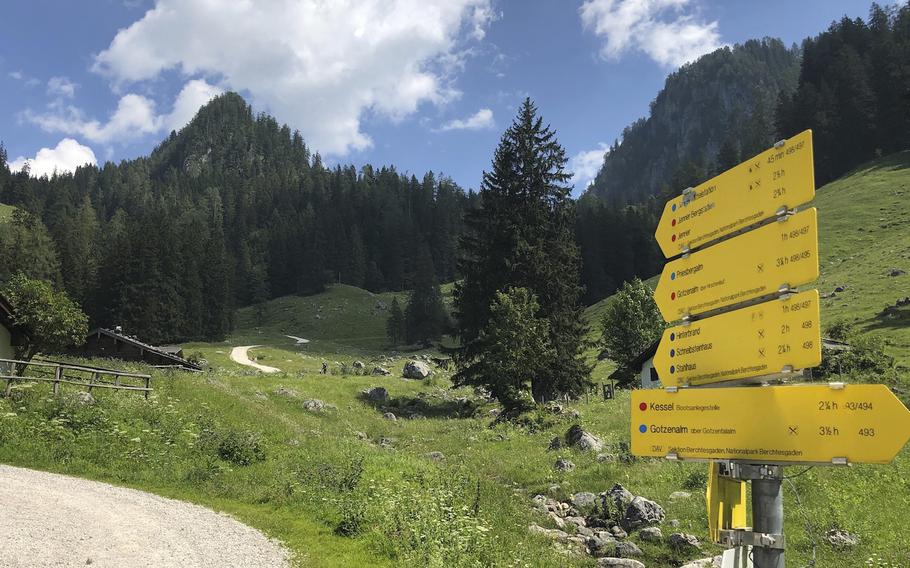 Signposts that provide estimated hiking times and degrees of difficulty appear along a trail in the Berchtesgaden National Park in Germany on June 27, 2022. (Mike Eckel/AP)

Berchtesgaden’s huts are serious structures. Supplies are helicoptered in, or hefted on cable cars. They range from huge — Watzmannhaus has 200 sleeping spots — to small — Wasserhalm has a few dozen. Some are concrete and steel; others have simple wooden roofs and beams. All serve serious meals: soups, stews, beef-and-dumplings. And lots of beer and wine.

Spend your days trekking steep trails and meeting random people. Then swap stories about hiking, and life, and then you’re drinking beer and schnapps, and then you’re fumbling through languages and life tales, and then, by lights out, you’re hugging and toasting and laughing and crying.

Trekking into Berchtesgaden is easiest from the northern tip of Konigssee, an 8-kilometer-long (5-mile) impossibly turquoise lake. The town at the tip is a tourist mess: ice cream, T-shirts, lederhosen and Tyrolean hats. Privately run electric boats run passengers up and down the lake seasonally, offering access to Germany’s highest waterfall or the stoic lakeside Church of St. Bartholomew’s. 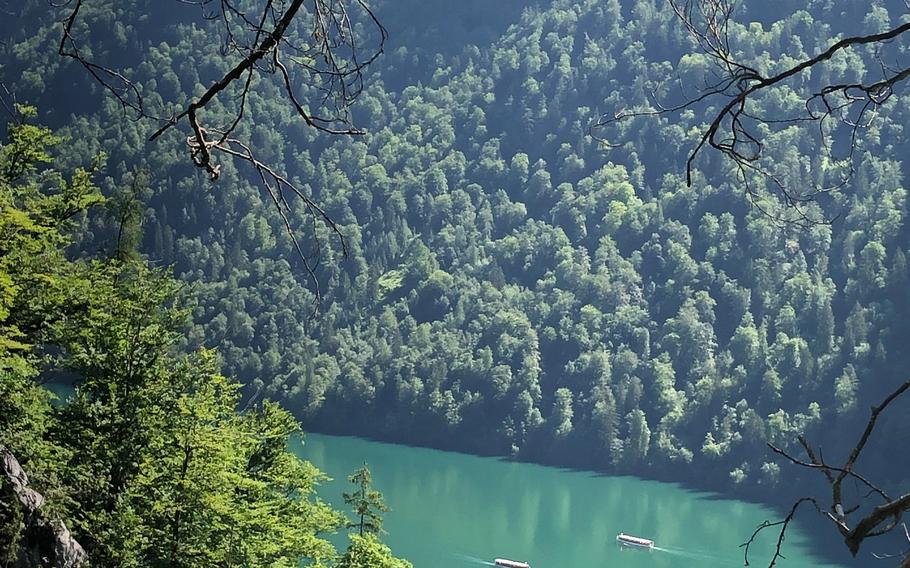 Many visitors forgo the hike and instead take the year-round Jennerbahn cable car up 1,874-meter (6,200-foot) Jenner Mountain, where there’s a massive restaurant and spectacular views.

For hikers, it takes about 15 minutes to leave the madding crowds for quieter wood trails. Some are rough footpaths; others allow service vehicles to supply a couple smaller huts that dot the hillsides and provide meals to day-trekkers. Not far from Koenigsbachalm, you can poke your head into a tiny distillery where schnapps are made from the mountain waters.

On the eastern end of Berchtesgaden is the Austrian border and Carl von Stahl Haus, where I overnighted. I ate lentil stew and drank German pilsner into the evening, until the storm lashed us with marble-size hail and gale-force winds. In the midnight hour, the winds banged open the bunkroom windows. 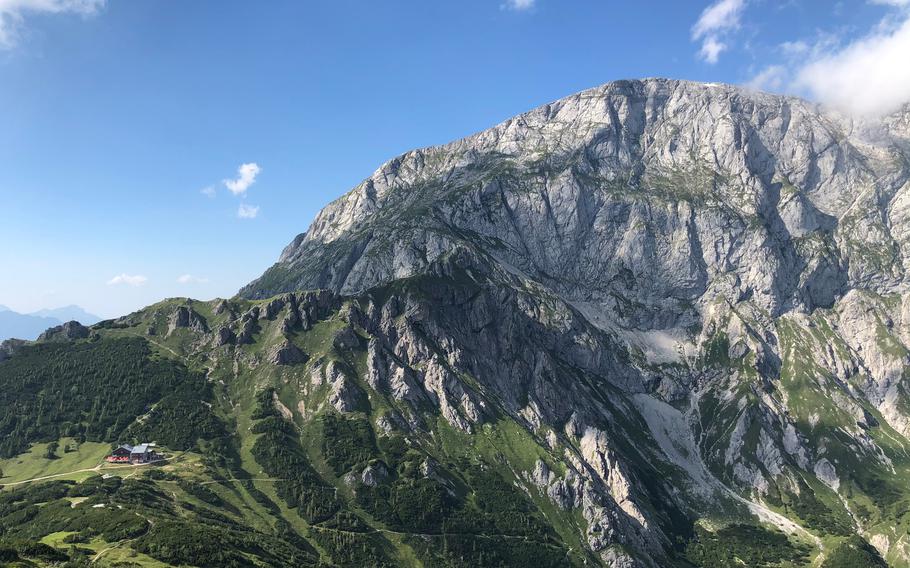 At 1,703-meters, at the border between Germany and Austria, Carl von Stahl Haus, bottom left, shown in this June 27, 2022 photo, is one of the more popular huts in the Berchtesgaden National Park, with bed space for 102 hikers, in both shared bunkrooms or semi-private rooms. (Mike Eckel/AP)

At dawn, the soup of clouds gave many of us doubts. But after climbing further up a sodden trail, I crested at Schneibstein (2,276 meters, or 7,467 feet) into brilliant skies. The clouds below shrouded everything but the highest peaks.

Trails are well-marked. They include degrees of difficulty, similar to ski trails. They also include not mileage, but estimated hiking times.

Once I realized that the times were VERY conservative, I worried less about making it to my destination on time and instead hiked in mesmerized awe.

Wasseralm in der Röth (1,423-meters, or 4,469 feet), my next destination, was a cluster of three modest buildings folded into a hollow ringed by sub-peaks. Torrents of evening and overnight rain sent a raucous stream bursting its banks and nearly turned the buildings into islands. It also made for a wet dinner conversation over vegetable stew and stacks of dark rye bread. The other hikers and I huddled under dripping eaves before retiring to a common room, where a wood-fired stove dried wet clothes and warmed bodies. White wine, beer and schnapps kept conversation going until 10 p.m. lights out — a strict rule of the huts.

Surprisingly for a German national park, the trails were in some places poorly maintained and not for the faint-hearted. Some places, we had to pick our way over scree fields, and hold onto steel cables bolted into the hillside. Wood ladders were broken or rotting, rain slippery. Bog bridges were under water.

Kärlingerhaus am Funtensee (1,638-meters, 5,374 feet), the next stop, was perched over a small lake, in a bowl ringed by ridges that caught the next morning’s sun like facets on a gem. On the lake’s other side, two low-slung wooden buildings were for the distillers who made schnapps from local waters. There was also a sheep herder who, I was told, was paid by valley farmers to mind their flocks in the summer and harvest wool and milk for cheese.

Alas, we got neither that rainy evening.

We did get tureens of chicken broth and heaps of beef slices and potato dumplings drenched in gravy, and dark rye bread — or pasta and tomato sauce for vegetarians.

We drank marillenschnaps — an apricot brew commonly associated with north-central Austria — and again, the presence of a solitary American sparked fun conversation, not to mention complimentary schnapps. Lights out: 10 p.m. Hiking boots are displayed in a drying room, in a hut in Berchtesgaden National Park in Germany on June 29 2022. The drying room, where heated metal bars dry out wet hiking boot, is an essential element of many German huts. (Mike Eckel/AP)

Back down to the lake, to meet a boat back to my car, the trail cut deep between two ridges, shrouding the trail in cool morning shade. An Alpine chamois — a type of antelope-goat — scrambled up the grass as I rounded one corner. She appeared unbothered by a solitary hiker, and grazed for several minutes as we stared at one another, before she hopped over a boulder, out of sight.

When I finally reached the Konigssee’s shoreline, it was impossible not to contemplate going for a swim. I had no swimsuit, however.

A few moments later, a group of older German men showed up and, without hesitation, dropped their packs, dropped their clothes and hopped into the shimmering waters full monty. 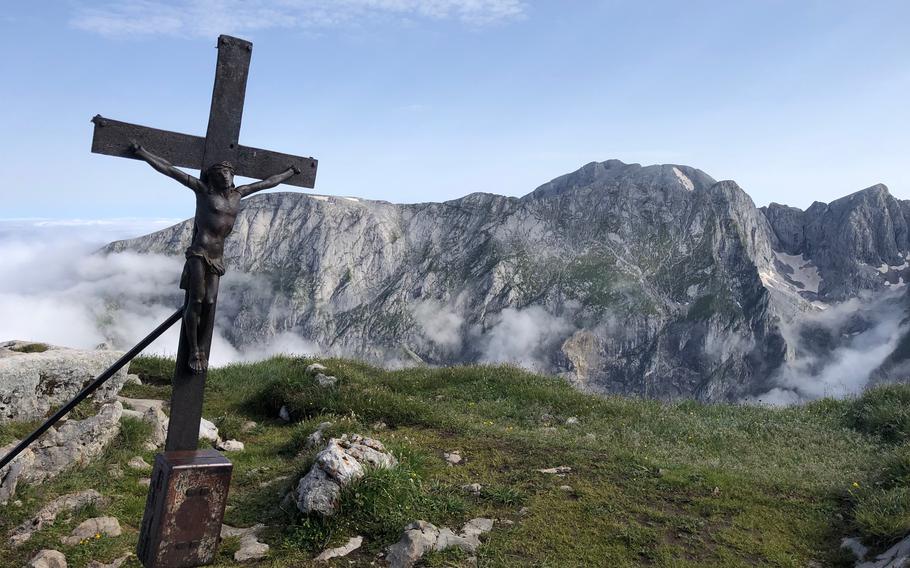 A crucifix appears at Schneibstein at Berchtesgaden National Park in Germany on on June 28, 2022, marking the border with Austria. Many of the peaks in the park have crosses or crucifixes at their highest points, erected by local mountaineers. (Mike Eckel/AP)

Bring a sleeping bag or bag liner. Whether you’re in a semi-private room or a larger bunkroom, huts provide pillows, heavy blankets and reasonable mattresses. An absolute must: “hut shoes”— slippers, sandals. It’s a no-no to clomp around the interiors in your hiking boots.

Making reservations can be confusing; patience is in order. Most huts are individually managed, and they belong to different reservation systems. Some take credit cards for reservations; most accept only cash on site.

Start with the German Alpine Club, which oversees 321 huts across Germany, Austria and Switzerland.

Huetten Holiday is another online portal that manages reservations for huts, in Germany, Austria and Italy.

General information can be found on the Berchtesgaden’s web page. You can also visit park headquarters, about 5 miles north of the lake, where you can get hiking maps and other information.