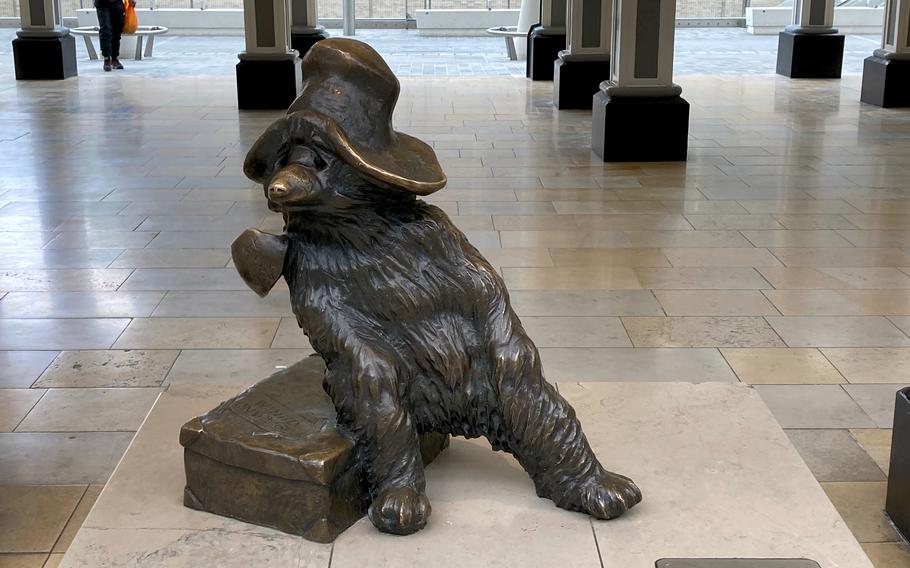 A statue of Paddington Bear at Paddington station. (Will Hawkes/For The Washington Post)

The London Underground train hurrying me toward Paddington station is a bit unusual. In place of the usual riders - harried commuters, eye-contact avoiders and world-weary big-city hipsters - there are pensioners, teenagers, families, all thrilled to be here. It's May 24, and the Elizabeth Line, the most exciting thing to hit Transport for London since the double-decker bus, opens today. It has been about 30 years in the making, cost about 19 billion pounds (about $23 billion) and is four years behind schedule, but no one seems to care. Strangers are even talking to one another, an extinction-level phenomenon on the Tube.

The line, which stretches from Heathrow Airport and distant Reading in the west to Abbey Wood and Shenfield in the east, is a boon for anyone arriving at Heathrow; not only will it allow visitors to get to central London in double-quick time, but it will also open up swaths of the city in an unprecedented way.

Listed by the closest Elizabeth Line station, here are six places well worth visiting, offering Punjabi cuisine, soaring Victorian architecture, Abba and much more. Some are widely known, others less so; all have been made more accessible by the line.

My grandfather William Hawkes was the stationmaster at Southall. He'd struggle to recognize it today. There's a new glass-fronted station building for the arrival of the Elizabeth Line, and, beyond that, this outer suburb is very different from when he knew it before the Second World War. Then it was home to Welsh migrants, among others. Since the 1960s, it has been London's most significant center of Punjabi culture and remains an iconic South Asian neighborhood.

Turning north from the station, you pass first the Gurdwara Sri Guru Singh Sabha, a large Sikh temple on Park Avenue, then Saravanaa Bhavan, part of an Indian chain that bills itself the "World's No. 1 Indian Vegetarian Restaurant." The building has its own history, having been home to Glassy Junction, a legendary Punjabi pub, until it closed about a decade ago.

I'm going to a local culinary institution, Rita's Chilli Chaat Corner, which opened in 1968. The food is generous and good-value, the service warm and Rita's Royal Mix Chaat (about $13.70) enormous. It's a symphony of flavor and texture: crunchy papdi crackers, samosas and tikkis, chili and coriander sauces, chole (a chickpea curry) and bhel, puffed rice with sweet tamarind chutney. Rita’s Royal Mix Chaat, a dish served at Rita’s Chilli Chaat Corner, which opened in 1968. (Will Hawkes/For The Washington Post)

By the time I'm finished, I'm more than full. Tentative plans to pick up some jalebi, a deep-fried sweet snack, go out the window, but I do stop into Quality Foods, a supermarket with subcontinental treats, to pick up some spices.

They've moved Paddington Bear. Until recently, a statue of London's most famous marmalade sandwich fan was under the clock next to Platform 1, away from much of the station's human traffic. Now, thanks to the arrival of the Elizabeth Line, he's been shifted. Where to? "Oh, he's over by the pasty stand," a station employee tells me. "He was a bit in the way here."

I find him surrounded by yellow safety barriers. No more pictures for Paddington, at least in the short term: There used to be a regular stream of small and not-so-small people lining up for their Kodak moment. (Happily, there's still a bench shaped like a Paddington book on Platform 1, which fulfills much the same function.)

Paddington's new perch gives him a slightly better view of the station's vast magnificence. Built as the terminus for the Great Western Railway in 1854, it's second only to St. Pancras among London termini in terms of heart-lifting delight. Three wrought-iron arches support a glazed roof, rising and swooping across the station. Walk to the western end and climb onto a raised walkway for the best view - and a close-up of delicately curved ironwork.

The rise of working from home on Fridays means that old hospitality industry canard, "Thursday is the new Friday," may have finally come true, at least for some of London's office workers. So what does Soho, historically London's most energetic central district but often quiet during the pandemic, look like on a Thursday evening in late May?

One of the Elizabeth Line exits at Tottenham Court Road station spills out directly into Dean Street, arguably Soho's main thoroughfare. Just after 7 p.m., there are crowds outside the Toucan, the Nellie Dean, and the Crown & Two Chairmen; Old Compton Street is buzzing with noise, taxis edging along behind groups of oblivious 20-somethings. In the Coach & Horses on Greek Street, it's a little quieter, although bar staff are busy. (The London Pride ale is tasting very good.) Meanwhile, there's barely standing room in the French House, inside or out, but there rarely is. 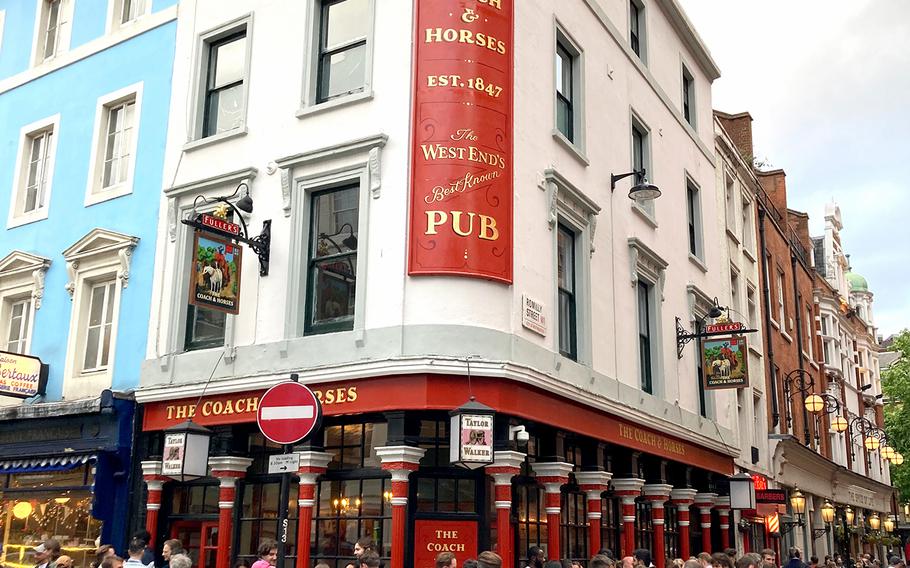 Among the Elizabeth Line’s stops are Tottenham Court Road station, which makes Soho pubs such as the Coach & Horses more accessible. (Will Hawkes/For The Washington Post)

On Wardour Street, a Toyota Prius is blasting, rather incongruously, "California Dreamin' "; a young man with face painted white, Marcel Marceau-style, is playing the Beatles' "Michelle" to a nonexistent crowd on Archer Street; and bass reverberates around Great Pulteney Street, emanating from an event at the clothes store Daily Paper.

As you walk down Leather Lane, you notice a pattern. A five-minute stroll from Farringdon station, this historic street market has become renowned for good lunch options in recent years, but one option is on the verge of excluding all others: falafel. There's Falafel Time, Dukan 41, Falafel & Grill House, Balady and many others, too.

How do you choose? It probably doesn't matter. I plump for Falafel Time, where I'm furnished with a large and varied box containing not only falafel but also hummus, halloumi, tahini, chili sauce and salad for less than 7 pounds (roughly $8). It's delicious, harmonious and gone in five minutes.

Leather Lane is not the only market close to Farringdon station, though. There's also Smithfield, the city's ancient meat market, where it was once easy to get a huge English breakfast and a pint of beer at 7 a.m.; now, only the Fox & Anchor, to the northeast of the market, keeps that tradition alive. By 2 p.m. on a Tuesday, though, the market is as dead as its produce, although there's plenty of noise from the work to convert the western section into the new Museum of London.

Exmouth Market, to the north, is lively. An Italian man is on the phone, gesticulating enthusiastically, his voice gradually gaining in intensity. A couple wander past, chatting in French. Across the street is Furanxo, a Spanish deli, and, best of all, Cafe Kick, a long-established bar with a foosball table and a lightness of feel that suggests Lisbon or Marseille, France, rather than London.

A small group, perhaps 12 in number, has gathered outside a hexagonal black building just south of the Queen Elizabeth Olympic Park in Stratford. They're waiting for that evening's performance at the new Abba Voyage experience, a live show featuring avatars of the Swedish pop sensations. There are families, teens and some old enough to have seen Abba in their heyday, all decked out in Abba T-shirts. They're keen: A nearby countdown clock says there are 5 hours, 10 minutes and 25 seconds to go before the performance.

Farther north, close to the London Stadium and Stratford station, five equally enthusiastic young men are trying to get a bicycle and a trailer - an electric-powered trailer, no less - to move a bit faster. They're failing. There's plenty of performative huffing, puffing and shouting, but not much progress.

I was last inside the Olympic Stadium in 2012, on the night British athletes won three gold medals; "Super Saturday," the U.K. press called it. Now it's home to West Ham United, London's fourth-most-popular football team, a focal point for a burgeoning new neighborhood. Not everything is new around here, though: In Hackney Wick, about a 10-minute walk away, the Lord Napier Star - closed for about 25 years, derelict and comprehensively graffitied - recently reopened, bucking a trend of pub closures dating back decades. It's at the heart of what has become one of London's unlikeliest nighttime hubs.

There are two Woolwiches, or so it seems, divided by Beresford Street. To the south, there's the old Woolwich, which hums with blue-collar life but could badly do with some cash. To the north, there's the regenerated Royal Arsenal, where the new Elizabeth Line station can be found, which has seen plenty of investment in recent years. The square in front of Woolwich’s Elizabeth Line station. (Will Hawkes/For The Washington Post)

Until the late 1960s, this was the U.K.'s most important munitions and armaments factory, peaking in size during the First World War, when about 80,000 people worked here. In the square opposite the station, there are mature trees - lime, plane, sycamore, chestnut - and the 18th-century Dial Arch, once a workshop, now a pub. It inspired the formation of the Arsenal Football Club, based in Woolwich until it scuttled north of the river in 1913.

There are a variety of ways to get back into town from Woolwich. You can catch a boat (such as the Uber Boat by Thames Clippers) up the Thames as far as Battersea Power Station, or walk westward along the Thames Path. No one could blame you, though, if you decide to head back underground and discover what else the Elizabeth Line has to offer.

Located next to Stratford International station, this modern hotel contains a fine restaurant, offers Pilates classes and provides easy access to Olympic Park and beyond. Double rooms from about $144 per night.

You'll find the Resident down a calm cul-de-sac just off Dean Street, with in-room mini-kitchens (including microwave, Nespresso, fridge and kettle) as standard. Double rooms from about $215 per night.

Southall is full of inexpensive options, but few with the history of Rita's, which opened in 1968. Try Aloo Tikki (fried potato cakes served with chickpea curry and chutney). Open daily, 11:30 a.m. to 10:30 p.m. Dishes from about $6.

Falafels dominate Leather Lane's lunch market, but there are plenty of other options, including a Yorkshire Burrito (a Yorkshire pudding filled with roast meat, stuffing, vegetables and more). Open Monday to Friday, 10 a.m. to 4 p.m.

Once famous for its truculent landlord, the Coach & Horses - also named Norman's, because of said landlord - may be Soho's best place for a beer. Open Monday to Saturday, noon to 11 p.m., and Sunday until 8 p.m. London Pride about $6 per pint.