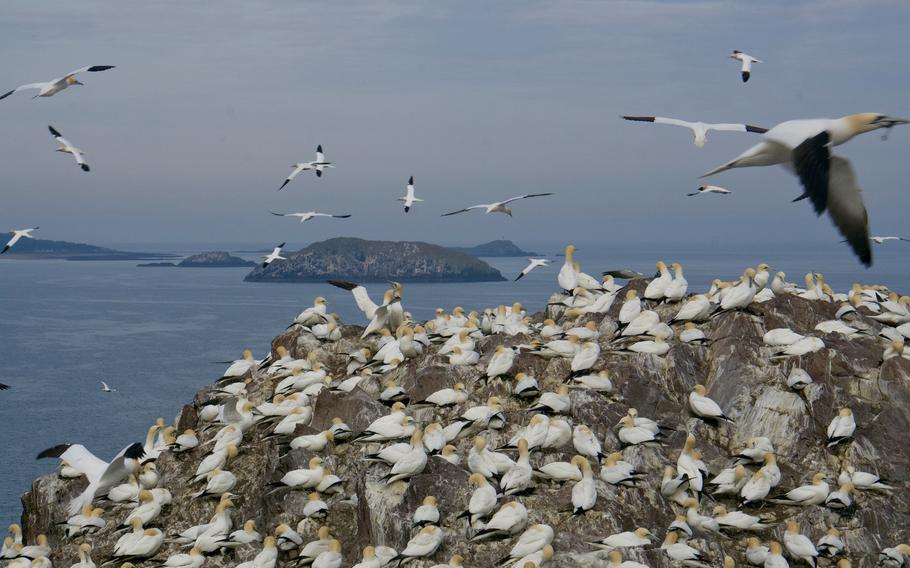 Bass Rock lies in the Firth of Forth and is home to the world’s largest northern gannet colony. (Karen Gardiner/The Washington Post)

The birds weren't supposed to be there. A length of rope strung along the island's rocky ground clearly demarcated a pathway, the boundary separating tens of thousands of gannets from my group of eight humans. If anyone had explained this to the gannets, though, they weren't letting on. Four sat stubbornly on the pathway I wanted to move along, their icy-blue eyes pitiless and their long, white necks stretched toward me, threatening with their scissor-like bills. I remembered the advice from our guide, Maggie, not to linger, lest they fixate on our legs. Too late. I stepped onto the path and a bill spiked my calf.

I was on Bass Rock, the tiny Scottish island from which the northern gannet gets its scientific name, Morus bassanus. While I winced at the stab of pain in my leg as I rushed across the path, I tried to focus on a greater sense of humility. I was an outsider in a world belonging utterly to gannets, and it was astonishing that the birds tolerated, to a degree, my presence.

"The Bass," as it is known locally, stands sheer in the Firth of Forth about three miles off the sea-scoured coast of North Berwick, about 30 minutes by train from Edinburgh. More than 150,000 northern gannets (large seabirds with about six-foot wingspans) nest on the island at the peak of breeding season. The few humans allowed to visit are either wildlife researchers or tourists on the only tour boat with landing rights. But while this lump of volcanic basalt carpeted with birds feels entirely inhospitable to people, it's seen more than its share of Scotland's complex human history. 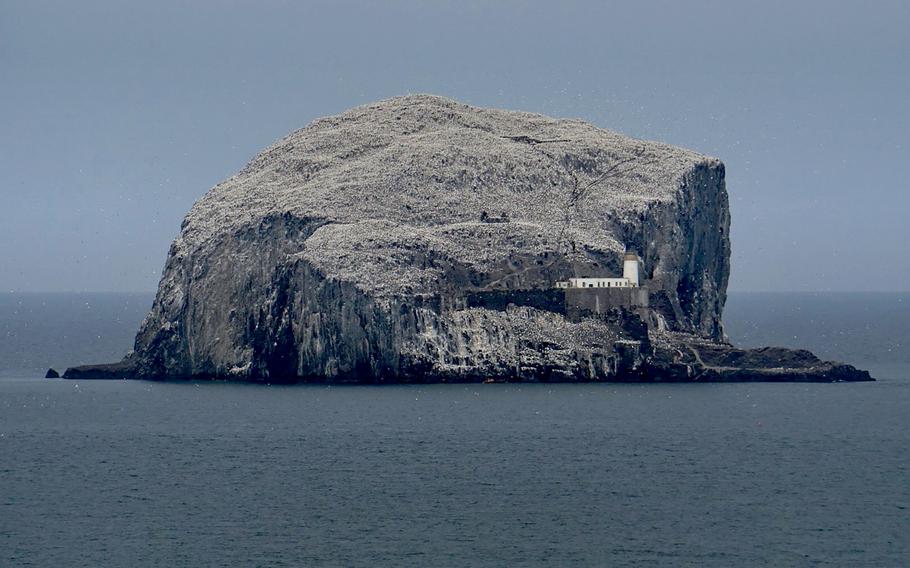 The island's first named occupant is believed to be the Christian hermit Saint Baldred, who died in his humble cell in 606; in the 15th century, a chapel was built on its site. Sometime after 1058, a castle was built, which, in 1406, sheltered the future James I, son of Robert III, from his enemies. By the 17th century, the Bass had become a jail for religious and political prisoners, particularly the Scottish Presbyterians known as Covenanters and, later, Jacobites, four of whom managed to lock their jailers out and hold the island from 1691 to 1694 in the name of the exiled King James VII. Bought by Hew Dalrymple in 1706, the Bass remains in possession of his descendants, who have surrendered it to the birds' protection. 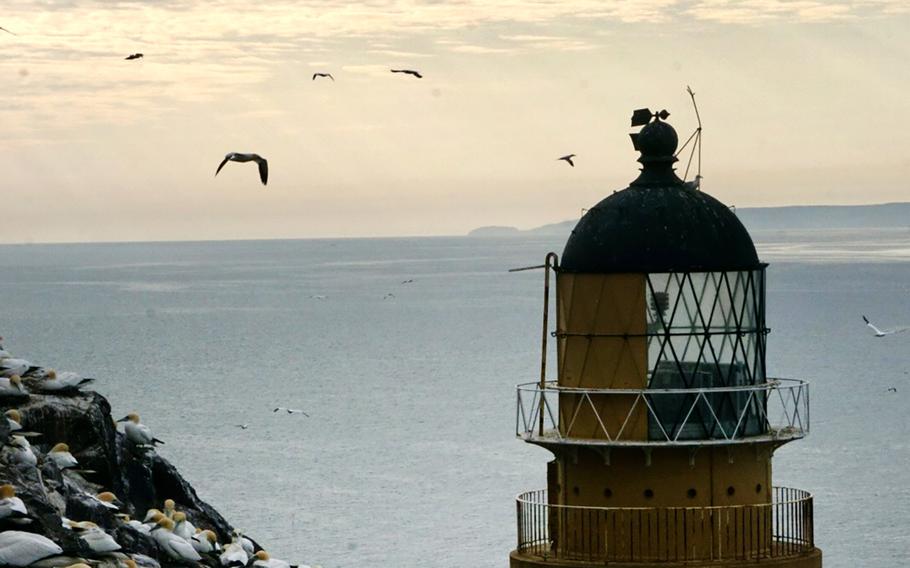 Throughout much of the dramas that have played out on the Bass, the gannets have been there, in varying numbers. The birds had long been hunted for their meat, eggs and oil, but it was the Victorian-era shooting parties that, for sport, decimated the colony. Over the past century, as wildlife protection laws have compelled a shift from killing the birds to observing them, the colony recovered, so much so that a 2014 census revealed it to be the largest gannet colony in the world.

North Berwick is an elegant little seaside town that has long served as a retreat from Edinburgh. Since 2000, visitors have also been able to visit the Scottish Seabird Center, where they can control live cameras to zoom in on gannets, as well as puffins, guillemots and razorbills, on the Bass and its neighboring islands of Fidra, Craigleith and the Isle of May. The center also runs popular boat tours around Bass Rock, as well as smaller and less-frequent tours that allow landing from late April to early September.

I had long been curious about the trip but was stingy about the cost (about $169). But, in the final days of April, as I was idly looking around the center's website, I noticed that every tour for the next few months was fully booked - except one, two days away. It felt like a sign. I read through the center's disclaimers that, because of weather, trips are often canceled with short notice and that landing on the steep-sided Bass is only for the agile and sure-footed. The forecast looked promising, and I consider myself fairly fit, so I booked the last spot.

It was cold but clear and calm when I met Maggie at the harbor at 5:45 a.m. "You're going to the most amazing place," she said, raising excitement in even the most bleary-eyed of our group. "It really is overwhelming," so much so, she said, that she'd better give us her talk right there before we landed on the island and were too overcome to pay attention. She told us not to disturb or inadvertently threaten the birds, to just sit quietly and observe. Looking at everyone clutching their cameras, she added: "Use your ears. Listen."

On the trip over to the Bass, the skipper, Alan, told us that, last year, only half of the scheduled tours were able to land. I didn't want to count my luck until I'd set foot on the island - the waves that pummel its unyielding rock reach so high that landing is often impossible - but within minutes, we were there. From land, the Bass appears to be frosted with white icing. But as we approached, the white started to move, and my perception shifted to comprehend that I was looking at tens of thousands of dazzling white birds bonding, mating, fighting, lifting off, landing. The short journey was scarcely enough to prepare for the sting of the senses being thoroughly slapped on arrival: the relentless screeching, the smell of ammonia, the rock heaving with life.

It was overwhelming. It was beautiful - if you find beauty in a nature that is untamed rather than neatly framed. It felt chaotic, lawless and as though violence could erupt at the slightest provocation. I saw gannets fight over territory so aggressively that wings and beaks were stained with blood. I watched one furiously bully another off a cliff. My ill-fated pathway crossing tinged my sense of wonder with dread whenever they came close. But I also witnessed the affection of pairs (gannets mate for life) "fencing" as they were reunited. "It's like giving each other a hug," said Maggie, who encouraged me to focus on individual birds, to see what they were doing and understand why. She told me to watch for birds "skypointing" with their bills, a signal that they are about to head out to sea, so their partner must remain on the nest. 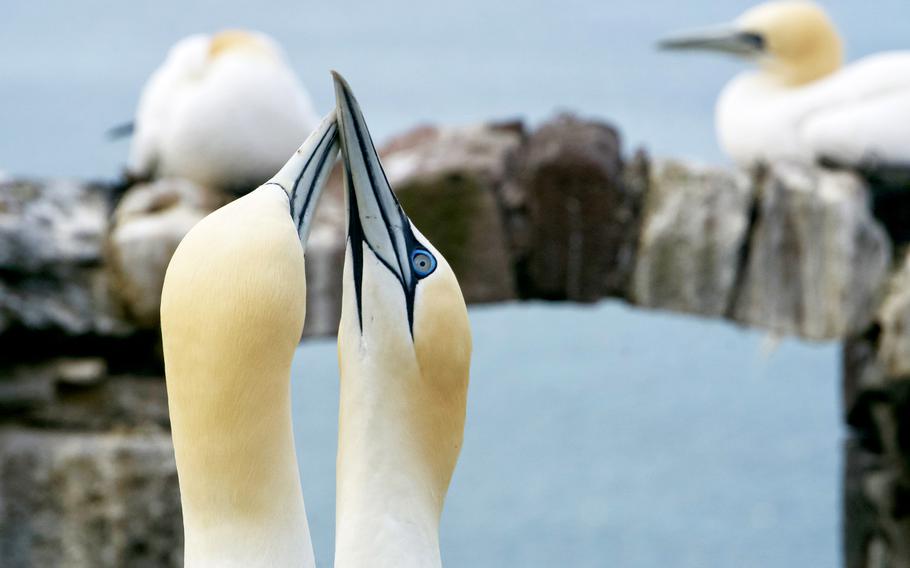 We know this detail thanks to the late ornithologist Bryan Nelson, who, with his wife, spent three years living in a shed among the chapel ruins on the Bass. It seems so obvious - of course they need a signal to ensure that the nest is not left unattended - but it took Nelson many long hours of thoughtful observation of the gannets' behavior to reach this conclusion.

Was it important for me, just a tourist, to understand this? I'm a very amateur birdwatcher; I just like them and enjoy the life-or-death intensity of a seabird colony. But as I watched, focusing on individual pairs and tuning out the clamor, I had a sensation that felt familiar but almost forgotten. For a moment, the world was small and comprehensible. I watched a gannet point its beak to the sky and knew what would happen next. I had come to the Bass seeking spectacle, but I was already overwhelmed. My world had been overwhelming for two years. I needed what looked like the predictability of theirs.

I watched birds skypoint, then fly away, return and greet their mates. By October, their chicks will have fledged, and they'll all follow, back out to sea. But they'll return next spring, and the years after that. I considered this consistency, and it felt calming. I continued to watch them until my three hours in their world were up, and I returned to the chaos of my own.