Are Danish hot dogs the best? I went to Copenhagen to find out. 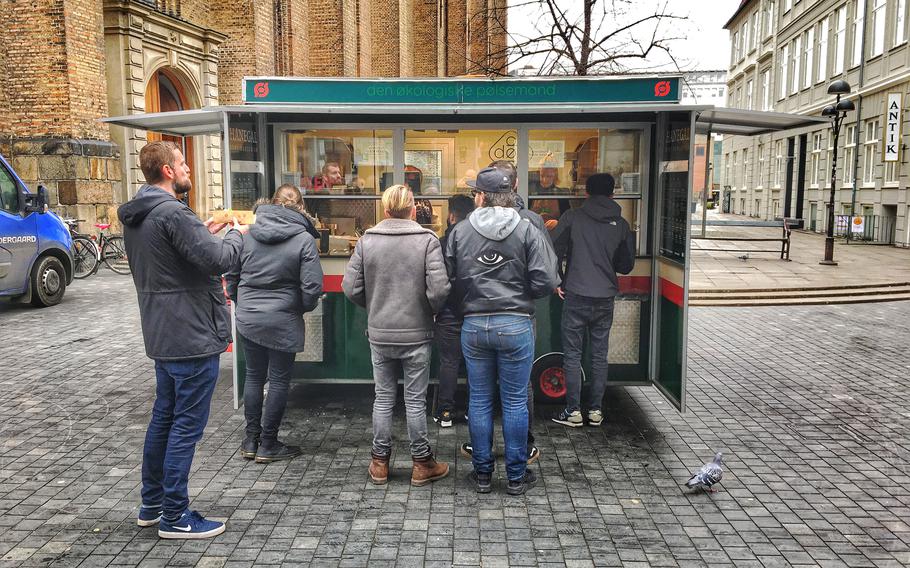 An award-winning hot dog stand in Copenhagen, DOP - or Den Okologiske Polsemand - attracts a line. (Will Hawkes/For The Washington Post)

It's 11:30 on a Thursday morning, and a middle-aged woman, her hair in a neat blond bob, is devouring a hot dog in the baggage reclaim hall at Copenhagen Airport. In some countries, that might seem quirky, but it's perfectly normal here: There's a hot dog stand next to the currency exchange window, and plenty of others are also eating, attracted by the smoky, savory tang hanging in the air.

Danes love hot dogs. I learned that from my Danish neighbor, Michael, when he dragged his grill into the road for our street party in London one summer before the pandemic. I ate four - maybe five - because they were delicious, even though he complained they weren't quite right. He hadn't been able to source rode polser, the authentic red Danish dogs, he said.

In those pre-covid days, that seemed a good enough reason to head for Copenhagen to find the genuine article. Not only that, but in 2020, the city's hot dog wagons - polsevogn - also celebrated the 100th anniversary of an ordinance that established the right to sell hot dogs in the streets; the first wagons appeared in 1921. The perfect time, I convinced myself, to go and eat too many hot dogs in Denmark.

I arrived on a chilly March morning, just before the worldwide wave of shutdowns. My hotel, Rye115, was in Osterbro, a largely residential neighborhood separated from the city center by Sortedams So, a long, slim artificial lake. The day was cold but beautifully clear. Bright sunshine glinted off the lake's timid waves; seagulls hovered and squawked overhead. A group of children played soccer in a caged playground, and the ball came flying over and into the water. There was silence, then loud recriminations.

I took my time. It was half an hour before I found my first hot dog wagon, Petersens Polser, in Hojbro Plads, a large pill-shaped square in the heart of the city. Like most of the wagons, it was a rectangular trailer, towed into place each morning by a tiny motor at one end. There was a grill inside, and customers could shelter, if need be, under a tarpaulin cover. 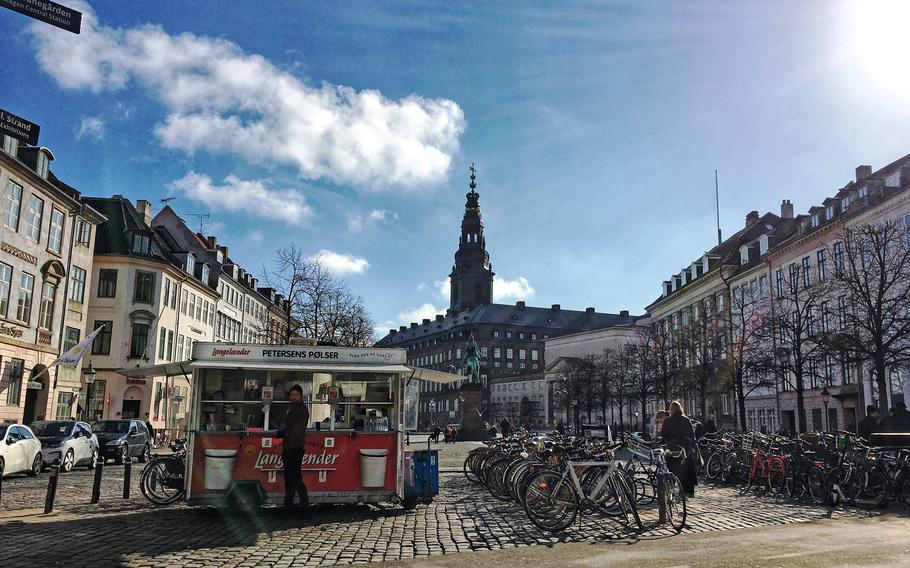 Petersens Polser, a hot dog wagon in Hojbro Plads, is centrally located in a square in the heart of Copenhagen. (Will Hawkes/For The Washington Post)

The menu had 12 options: red hot dogs (rode polser), bacon-wrapped hot dogs, a bofsandwich (Denmark's version of the hamburger), and other combinations of sausage, toppings and bread. I selected a rode polse with ketchup, mustard, rémoulade (a piquant mayonnaise-based sauce beloved by Danes), fried onions, fresh onions and pickled cucumbers. The woman running the wagon hummed her approval: "All the toppings? That's the real Danish hot dog." At 33 krone (about $5) it's not expensive, but it's more a snack than a meal.

There was a bench nearby, in the shadow of a statue of Bishop Absalon, regarded as the founder of Copenhagen, and I took a seat. It turned out to be a messy business. As I bit into the taut casing of the sausage, chunks of onion and gherkin fell here and there. A group of pigeons, delighted at my clumsiness, hurried to squabble over the spoils.

The hot dog was delicious, but Copenhagen is full of flavor. A short walk north took me to Torvehallerne, a food market bursting with pan-global variety. There were tapas, sushi, charcuterie, fish and chips, pizza, superb coffee and loads of raw produce, with seafood so fresh I was convinced one turbot was winking at me. There were also delicate Danish open sandwiches, but the only sausages I saw were being sold by Lund, a butcher, for cooking at home.

It seemed as if Copenhagen might be getting too sophisticated for hot dogs, so I spoke to historian Allan Mylius Thomsen, veteran writer and author of a book about hot dog wagons, "Café Fodkold," or "Cold Feet Cafe," an old nickname. ("In Copenhagen, there's a nickname for everything," he says.) It details how the idea came from Germany but evolved in the 1950s thanks to American influence, most obviously in the form of ketchup.

Copenhagen had 500 hot dog wagons then; there were about 50 pre-pandemic, when the number was slowly increasing. "There have been a few more in recent years, particularly the organic sausages," he told me on the phone. "In the 1950s, hot dogs were the only fast food, but there's much more competition now, from Chinese food to shawarma." (Numbers have dropped no further since the pandemic, Thomsen told me recently by email; in fact, he believes a few more organic options have opened.)

On Friday morning, I was hoping to witness an amusing ritual. Copenhagen's hot dog wagons, pulled by tiny sit-on motors, chug to and from their pitch very slowly each evening and morning, and drivers are very accepting: Only a creep, one Dane told me, would honk at a hot dog wagon.

Alas, I was too late. I'd lingered too long in Ostre Anlaeg, a serene park close to the city center. By the time I got to Norreport at 10 a.m., Helle's Polser had parked, and its owner was opening the hatch and clipping little Danish flags to the wagon. Down in Kultorvet, meanwhile, the owner of Peter's Polser was carefully placing a tarpaulin over his wagon's motor.

Never mind. At lunchtime, I headed for DOP, or Den Okologiske Polsemand (the Organic Hot Dog), near the Rundetaarn, a 17th-century tower in the city center. It's a multi-award-winner, and I was looking forward to trying it. Two young women, Ida Muusmaan Vinglov and Lea Maria Persson, were serving, and they were happy to talk between orders. Vinglov said Danish people, who are typically quite reserved, tend to be more open at the hatch of a polsevogn. 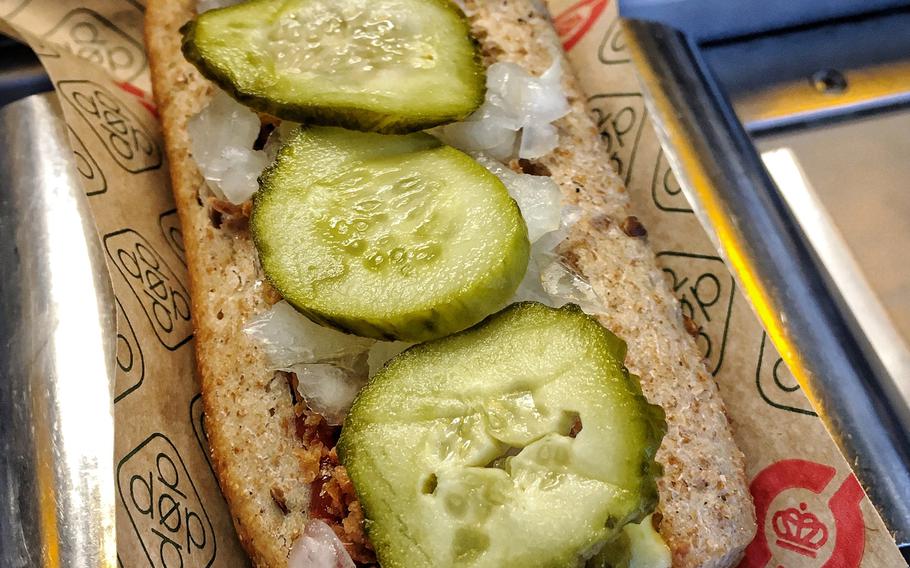 From the award-winning Den Okologiske Polsemand, this has the works: mustard, ketchup, rémoulade, fried onions, fresh onions and pickles. (Will Hawkes/For The Washington Post)

Vinglov, 23, had never eaten hot dogs before beginning at the stall, despite growing up in the hot-dog-loving region of Jutland. She seemed keen, though: "I keep meaning to bring my own lunch, but these are very delicious." She was right. It was the best traditional hot dog I had during my trip: high-quality meat in a delicious whole-grain roll.

I spent the afternoon walking it off before dropping in at a beer festival - Social Revolution by Beer - at Sparta Hallen, a sports hall close to my hotel. Vegetarian hot dogs were available, but they didn't appeal. You can't escape hot dogs that easily in Copenhagen, though: Mikkel Borg Bjergso, founder of globally famous craft brewery Mikkeller, was at the festival. Having been told he was a hot dog aficionado, I sidled up for a chat.

I was not misinformed. He's such a fan that he's created one of his own, he tells me: a black hot dog topped with gold leaf that was a monthly special at a well-known stall, John's Hotdog Deli. It was inspired by a famous sketch from a Danish "Candid Camera"-style show, in which the red sausages were dyed green, and customers refused to eat them. He said he eats hot dogs about once a month when coming through Copenhagen Airport. "Everywhere has hot dogs, but ours are the best in the world," he insisted.

Perhaps that's true, but you can have too much of a good thing. On Saturday, I walked down to Nyhavn, a 17th-century canal flanked by colorful townhouses, in search of something different for lunch. From there, back streets took me to Cafe Gammeltorv, which has been serving another Danish classic, open sandwiches, since 1902. I enjoyed two: pickled herring and roast beef. The beef was served with rémoulade and roasted onions; it was presented more elegantly than at a hot dog stand, it's true, but the familial link was clear. 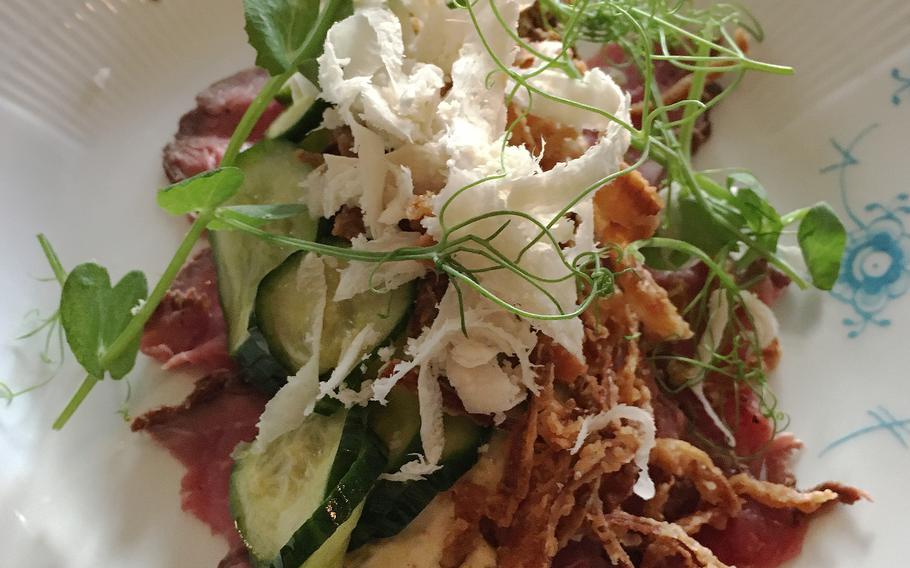 Another Danish specialty, the open sandwich, is a break from hot dogs. This one is an open roast beef sandwich from Cafe Gammeltorv. (Will Hawkes/For The Washington Post)

Later, I used Copenhagen's superb driverless metro system to reach Harry's Place, among the oldest polsevogn in Copenhagen, founded in 1965, where I scarfed down a frikadellesandwich, a pork meatball in a bun served with pickled red cabbage and yet more rémoulade. It was heavy, unctuous and very satisfying.

There was just one thing left ahead of my Sunday flight home. Before security at the airport, there was a hot dog stand, run by Steff Houlberg, the same brand as that in the baggage hall. I ordered what the woman with the bob had: a French-style hot dog with the sausage poking, faintly comically, out of a baguette-style roll.

By the time my flight took off, I was already looking forward to the next time I would pick up a bag at Copenhagen Airport. Two years on, I still am. 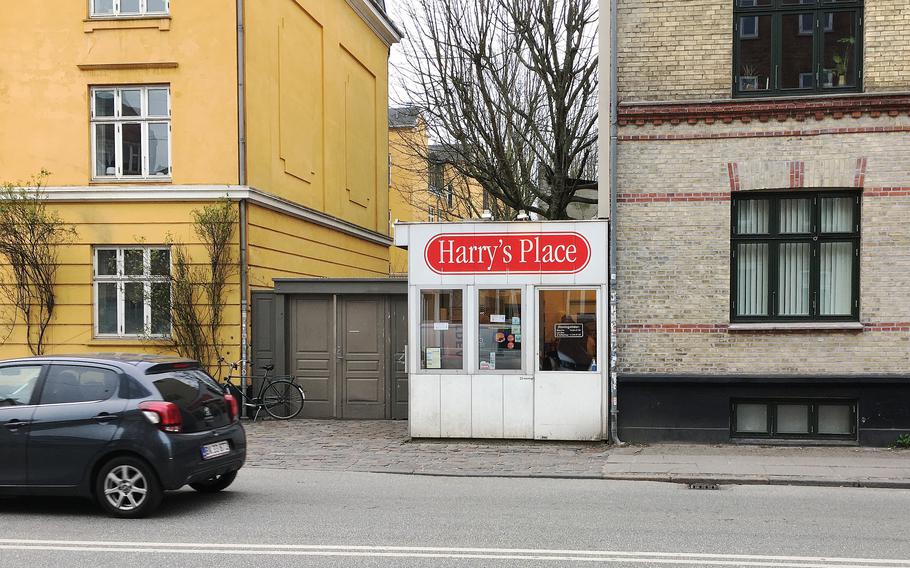 Hot dogs with a history: Harry’s Place, among the oldest polsevogn in Copenhagen, was founded in 1965. (Will Hawkes/For The Washington Post)

A delightful hotel with about 20 rooms on a quiet street in Osterbro, north of the city center. Breakfast, including delicious sourdough rolls and banana bread, is homemade, and the owners are available to chat and offer advice about the city. Bathrooms are shared but clean. Double rooms with breakfast from about $182 per night.

Established in 1755 and located in the heart of the city, this hotel offers Michelin-star cooking, one of Copenhagen's best spas and a remarkable history. Double rooms from about $540 per night.

Delicious organic hot dogs and sourdough rolls make this a great option for ethically minded consumers. Open Monday through Saturday 11 a.m. to 6:30 p.m.; closed Sunday. It has another outpost by the Church of the Holy Ghost, about a five-minute walk south. Hot dogs about $5.40.

The Museum of Copenhagen offers interesting human touches, such as the story of master thief Morten Frederiksen. Tickets give 48-hour access to two other museums: the Thorvaldsens Museum and the Nikolaj Contemporary Art Center. Museum open daily 9 a.m. to 6 p.m. and until 9 p.m. on Thursdays. Admission about $13 per person; children younger than 18 free. Free entry Wednesdays.

With more than 60 stalls featuring options such as Danish cheese, Spanish charcuterie and sushi, this food hall is a must-visit for foodies. Open 10 a.m. to 7 p.m. Monday through Friday, 10 a.m. to 6 p.m. weekends. Some breakfast places open earlier and some restaurants later. Coffee lovers shouldn't miss the superb Coffee Collective (open Monday to Friday 7 a.m. to 8 p.m. and weekends 8 a.m. to 7 p.m.).

Note: Potential travelers should take local and national public health directives regarding the pandemic into consideration before planning any trips. Travel health notice information can be found on the Centers for Disease Control and Prevention's interactive map showing travel recommendations by destination and the CDC's travel health notice webpage.