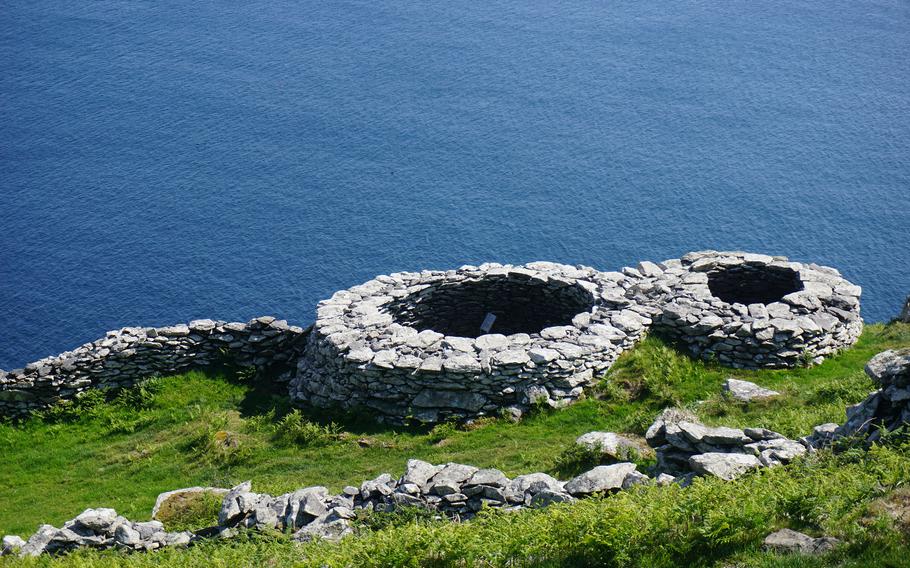 After dinner, we spread the map across the pub table. We had gotten a little lost that morning, probably due to jet lag, and we wanted to make sure the next day went smoothly.

It was May, before the pandemic, and my husband and I were walking most of the Dingle Way hiking trail in the far southwest of Ireland — about 100 miles over the course of a week.

Doug studied the map, looked through the guidebook and seemed satisfied. I sipped my Guinness and let him plan. I was the one who'd gotten us lost, and I was happy to let him lead. That meant that for the next six days, all I had to do was walk.

Two years after the shutdown, Ireland seems very far away, but it is on my mind. Of all the fascinating places I've been — London, Paris, Russia, Romania — it is Ireland that I return to again and again and Ireland that I plan to visit soon, now that international travel is returning.

Doug and I have driven the back roads of Connemara, taken ferries to islands, prowled museums, attended plays, wandered gardens. We stayed with a friend in Galway who introduced us to the pub traditions of snugs and lock-ins (that is, private drinking rooms and drinking after hours). We chased traditional music in the villages of Donegal and west Clare.

But the hikes are what stand out for me, the hike along the Dingle Peninsula in particular. The Dingle Way follows country roads, cow paths, beaches and sea cliffs, heads straight up into the hills and then sharply back down, cuts across farms, wanders through villages and past ancient stones carved with mysterious curlicues and slashes.

And so the next morning we shouldered our day packs and headed out of Annascaul village. The rest of our luggage would be shuttled ahead to our next destination, a B&B in Dingle Town. If all went as planned, we'd be in Dingle ourselves in about seven hours. We had 15 miles to go.

For the next five days, we hiked from town to town over hills and fields. Every day was sunny and hot, the sky an eternal bright blue. Not a drop of rain since April 1, one person told us. So unusual for this wet island.

My paternal grandmother's extended family came from Ireland — some from a village north of Dublin, some from County Kerry in the west. As a child I asked for books about Ireland for my birthday, pinned a map of the island on the wall by my bed. I wished that our house had a thatched roof and our name had an O'.

Hiking in Ireland satisfies something deep-seated in me. The rhythm of walking lets the muscles in my shoulders and my brain unkink; my feet may get sore on the steep up-and-downs — on this trip I lost a toenail — but the rest of me feels wonderfully alive.

I first visited Ireland in the 1980s. As the plane flew low over green patchwork fields, I was filled with a sense of completeness: I felt as if I had come home.

The fields, the mountains, the rivers all seemed intensely familiar. I craved to be part of that landscape. When I'm hiking, I am.

As the last day drew near, I began to fret. The last hike, nearly 14 miles, was to take us over Mount Brandon to the village of Cloghane, and I was wary. 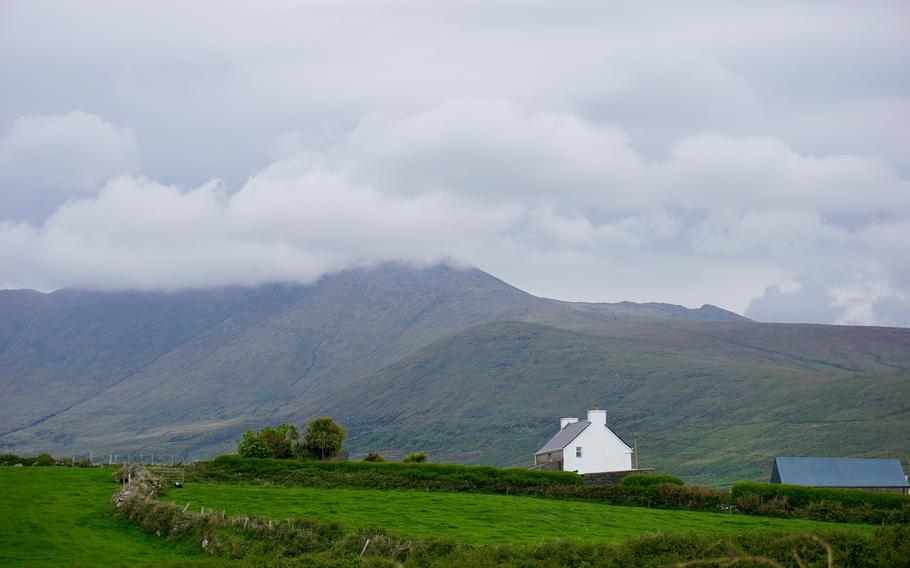 In the shadow of Mount Brandon. (Laurie Hertzel/Minneapolis Star Tribune)

More than 3,000 feet high, its summit usually lost in clouds, Mount Brandon is the tallest mountain on the Dingle Peninsula and one of the tallest in Ireland.

I read and reread the trail notes, and instead of reassuring me, they filled me with angst. "We highly recommend that you use walking poles for today's walk," was at the top of the page — OK, but did it have to be printed in alarming red italics?

The notes also warned: "If weather conditions are not suitable, i.e. low clouds or strong winds, or you are not confident in the use of map and compass please do not attempt this walk, as it is very dangerous with steep cliffs on one side."

Did the phrase "do not attempt this walk" have to be both boldfaced and underlined?

The weather had been dry, but now the forecast called for rain. If it rained, our options were to slide off the edge of Mount Brandon to our doom, or skip the hike and slink shamefully to Cloghane in a taxi.

"It's not like we'll be climbing Mount Everest," said Doug, who clearly had not been obsessing over the trail notes as he should have been.

That evening, we walked up the road to Cathair na BhFionnúrach, two ancient stone ring forts. A friendly border collie followed us. The air felt silky; the sky was clear above the ocean, but over Mount Brandon dark clouds were gathering. The summit had disappeared in mist.

We awoke to rain. Not just rain, but torrential rain, pounding rain, rain sheeting down the window by our bed.

Over breakfast, I was blue. A taxi seemed defeatist and cowardly. But I had convinced myself that hiking Mount Brandon in a deluge was beyond what I could do.

"There's another way," said our landlord, as he poured our coffee. "Over a shoulder. Not as high, not as steep, and it'll drop you right down on the road to Cloghane. I'll drive you there."

He dropped us off a few miles down the road. "Just follow the power lines," he said, pointing to a series of steep hills that seemed to go straight up into the fog.

The rain had eased to drizzle, and the grass was wet and slick. We walked slowly, up, up, into the clouds. After nearly an hour, we crested the first hill, trudged down through a muddy valley and headed up the next steep slope.

At the top, I stopped to catch my breath. All around us were craggy hills of green grass and black rock disappearing into mist. A few mountain sheep, shaggy white with black faces and curled horns, approached with curiosity, then galloped off down the slippery mountain. 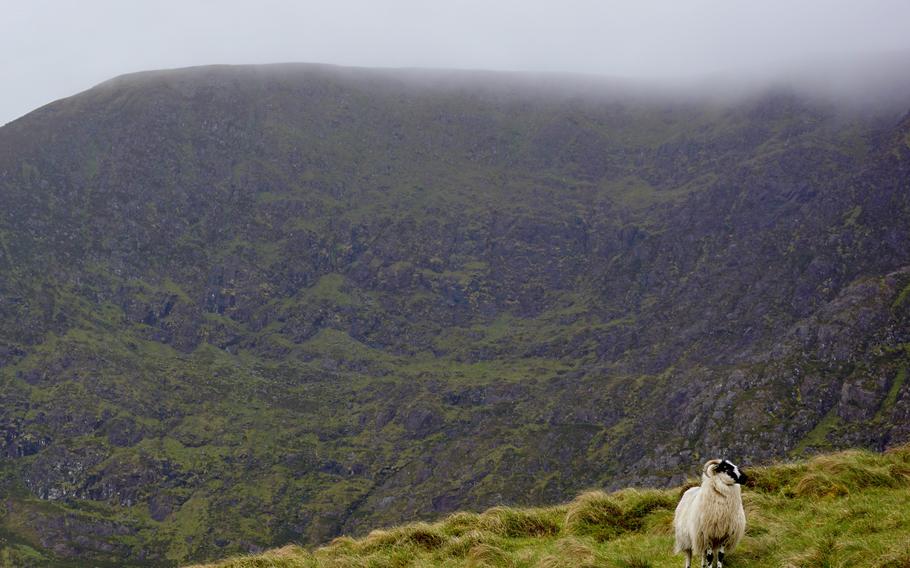 Wild and remote, this stretch of Mount Brandon was beautiful in an ancient way — to me, more beautiful than the glinting blue ocean or the cheerful pubs of Dingle Town. I wanted to lie down in the wet grass and stay there.

At the top of the next rise we looked down into the valley while a farmer, clad in oilskins, moved his sheep from one wet field to another. His border collie raced and barked.

The next day we would start a week in Dublin, meeting up with an old friend and showing him our favorite places — museums, cathedrals, bookstores, pubs and theaters. But that was tomorrow. Right now, as I picked my way down the far side of Mount Brandon, all I wanted to do was walk.